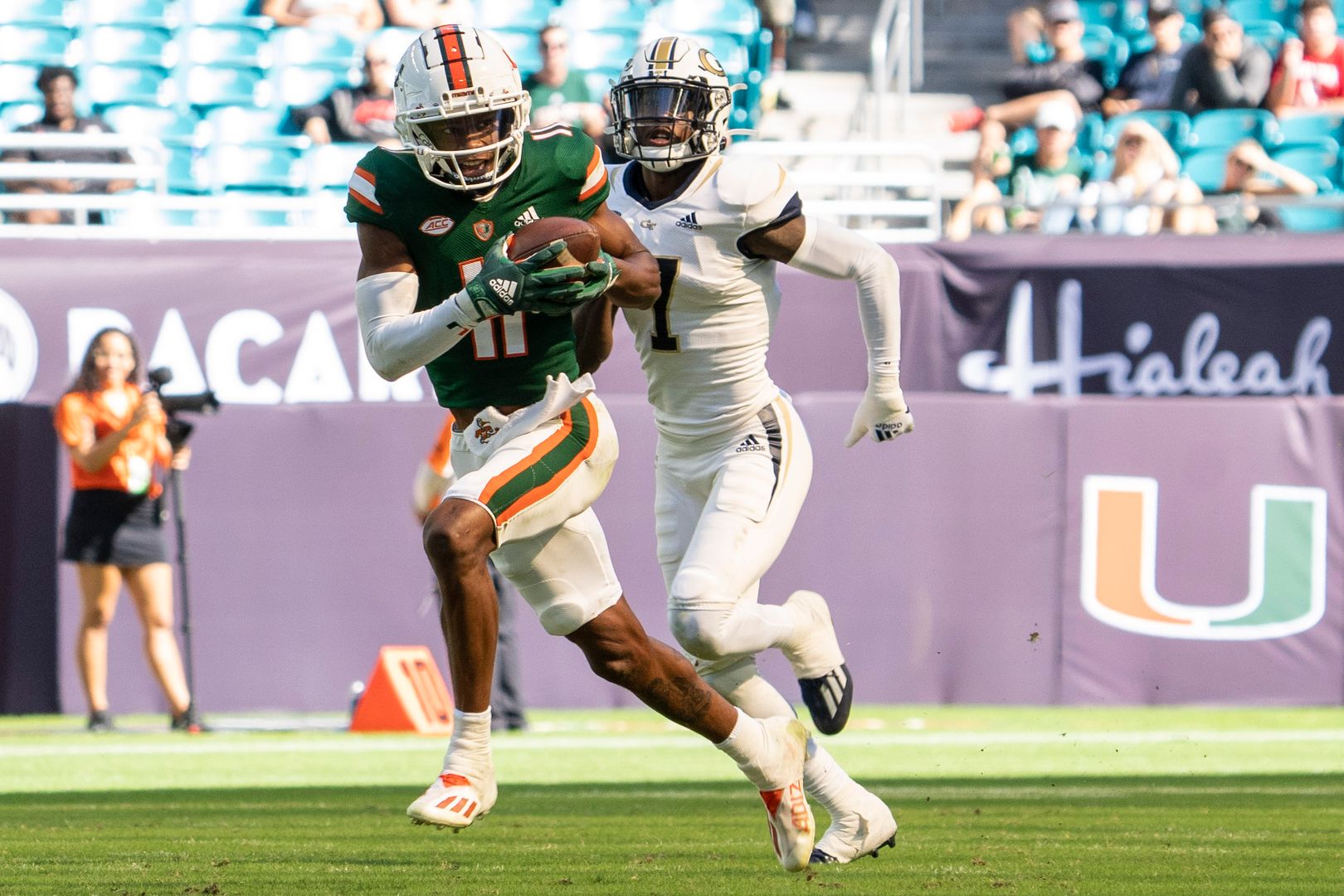 “I think I said this after the NC State game, but [Charleston Rambo] is a problem,” Miami head coach Manny Diaz said. “He is a hard guy to leave on single coverage, but all of a sudden if you want to put two on him, that affects your run fits and how you play your RPO. He is proving that week in and week out, and I think he is one of the top wideouts in our league. Our league is blessed with some big-time wideouts, which, to me, means he is one of the top wideouts in the country. We are lucky we have him and I am excited to see what he does here in the month of November.”

Rambo hauled in seven passes for 210 yards, trailing only Eddie Brown’s 220-yard mark against Boston College on Nov. 23, 1984. His fourth triple-digit receiving performance is the most in a season by a Hurricane since Ahmmon Richards in 2016.

“The tape speaks for itself but having those guys in the record books and me being added, it’s special,” Rambo said. “But I can be better and I want to be better for the team and for myself. I’m just going to go to practice and be better next week.”

The Hurricanes (5-4, 3-2 ACC) started strong, scoring on their first two drives. Miami began its offensive outburst, marching 93 yards down the field on 11 plays to jump ahead, 7-0.

Less than two minutes later, Van Dyke dropped a dime to Rambo for a 35-yard strike, doubling the Hurricanes’ advantage.

The Yellow Jackets (3-6, 2-5 ACC) buzzed back, breaking through with touchdowns on two of their next three possessions to level the game, 14-14, with 13:22 remaining in the second quarter.

Freshman kicker Andy Borregales put the Canes back in front, 17-14, with a 28-yard field goal on the Hurricanes’ ensuing possession.

However, turnovers would sting the Hurricanes before the half. Miami coughed up the football, the Yellow Jackets scooped it up and returned it 40 yards to the house, grabbing their first lead of the day.

The Hurricanes stormed out of the intermission with an answer. On the first play from scrimmage of the third quarter, Van Dyke aired out a 60-yard completion to Rambo, which matched his season-long.

Three plays later, Jaylan Knighton punched it from two yards out to vault the Canes ahead, 24-21, just 61 seconds in the half.

Borregales’ 31-yard kick in the opening moments of the final frame pulled the Hurricanes within one.

Miami’s defense forced a three-and-out, setting up prime field position for the Van Dyke and the Canes’ offense.

After Knighton moved the chains, Van Dyke showed off his cannon.

The second-year freshman found Harley for a 24-yard connection, setting up the game-winning score. Van Dyke fired a dart to Keyshawn Smith, who spun into the end zone, giving the Hurricanes a 33-28 advantage.

Van Dyke completed 22 of his 34 attempts, tallying 389 yards and three touchdowns. The Glastonbury, Conn. native became the first Miami quarterback since Bernie Kosar in 1984 with three straight games of at least 325 passing yards.

“Our guys are competing their tails off,” Diaz said. “These guys want to play and want to do whatever it takes for us to win the game. I’m proud of them and I’m grateful. I think we have a locker room of grateful guys that they get a chance, not just because of their individual efforts, but because of the collective. They are a bunch of like-minded people who care about the right things and they’re having some success because of it.”

Knighton finished with a career-high 162 yards on the ground, the most rushing yards by a UM freshman since Duke Johnson against Duke on Nov. 24, 2012.

On the defensive side of the ball, a trio of freshmen shined. Safety Kamren Kinchens registered a team-high seven tackles, Avantae Williams recorded his first career interception, leaping over the intended receiver to pick off Georgia Tech quarterback Jeff Sims, and defensive tackle Leonard Taylor racked up 2.5 tackles for loss.

“You look across the board and I think we had three true freshmen standing there and you are like, ‘Holy cow, this is it, man,” Diaz said. “It’s a little exciting. It was great to see Tae make a play. It was a play we needed someone to make. His effort and his relentlessness on special teams are helping us out. He’s just only going to get better and better. I’m proud of him and I know that he was happy to help contribute to our success today.”

The Hurricanes have now played five straight games decided by four points or fewer for the first time in program history.

“I know it’s a big deal here, it’s a reason why I came here, too,” Van Dyke said. “There’s a lot of history behind the game. This week’s going to be the hardest week we have all year, and we’re going to prepare well for it.”