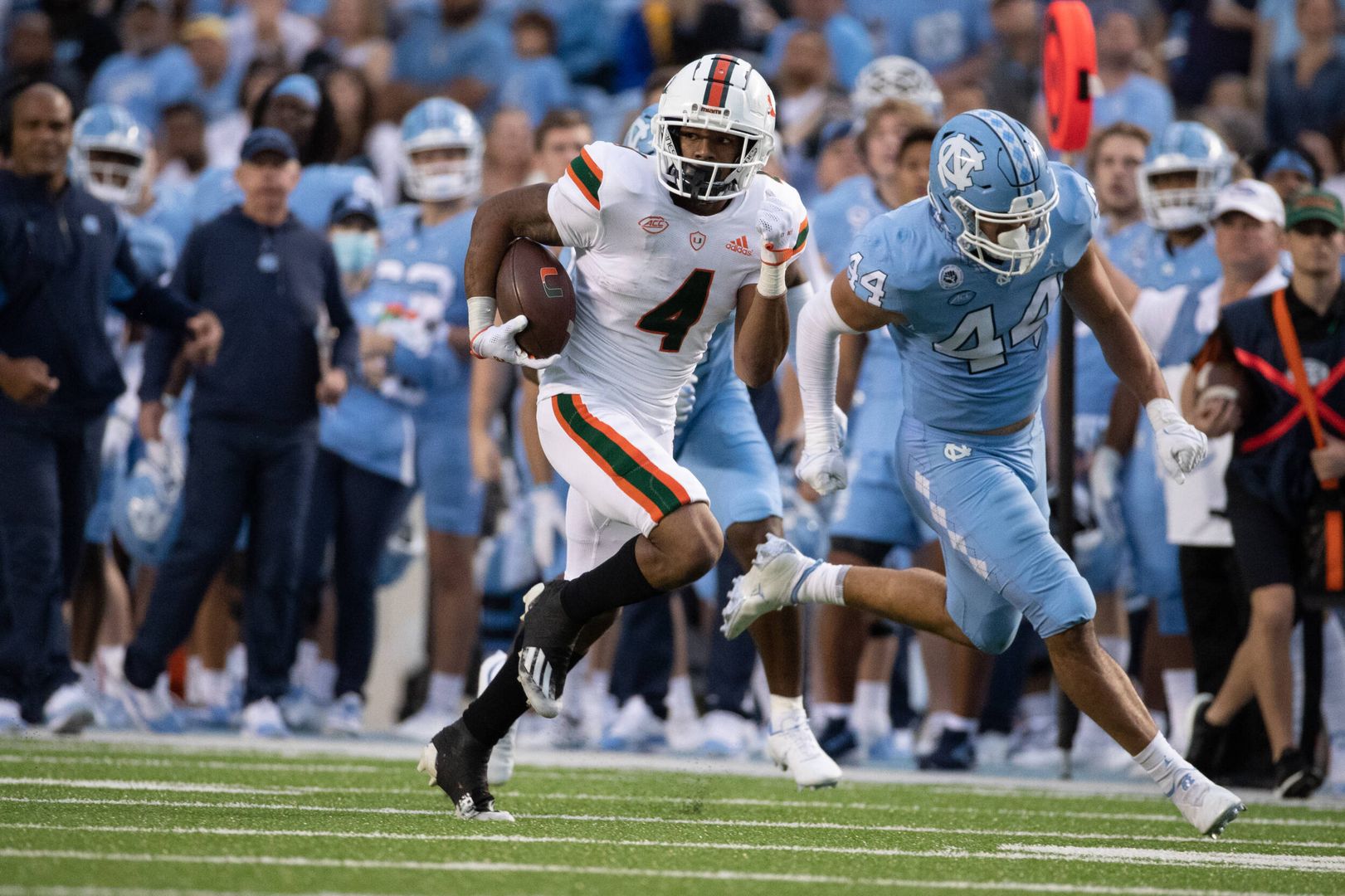 CHAPEL HILL, N.C. – The Miami Hurricanes valiantly battled back from an 18-point deficit in the game’s final stages, but ultimately fell to host North Carolina, 45-42, Saturday at Kenan Stadium.

The Hurricanes (2-4, 0-2 ACC) found themselves trailing 45-34 with fewer than five minutes remaining in the fourth quarter. But a touchdown from running back Jaylan Knighton followed by a successful two-point conversion cut the Heels’ lead to 45-42.

After a three-and-out forced by the Miami defense on the ensuing drive, the Hurricanes got the ball back with less than three minutes remaining. Quarterback Tyler Van Dyke marched Miami down the field and deep into North Carolina territory, but an interception from UNC defender Cedric Gray on a tipped pass at the line of scrimmage ended any opportunity for last-second theatrics.

Knighton was spectacular for the Hurricanes, finishing with 92 rushing yards on 17 carries. He had the second multi-touchdown performance of his career with a personal-best three scores – two rushing and one receiving. He finished with 165 all-purpose yards.

North Carolina (4-3, 3-3 ACC) jumped out to an early lead on a 51-yard touchdown rush by Ty Chandler on its opening drive.

After a three-and-out by the Miami offense, Jahfari Harvey delivered the first highlight reel play of the day for the Hurricanes. The defensive end tipped a pass from Tar Heels quarterback Sam Howell to himself, snagged the football and sprinted 33 yards into the end zone to tie the game, 7-7.

The pick-six was the first by a Hurricane defender since Romeo Finley did it against the Tar Heels at Hard Rock Stadium in 2018.

The Heels scored on another explosive play on their next drive, with Howell hitting standout wide receiver Josh Downs for a 45-yard touchdown to regain the lead.

Trailing 28-10 with five minutes to go in the third, the Hurricanes compiled a seven-play, 75-yard scoring drive that resulted in a 2-yard touchdown run from Knighton. The rushing score was Knighton’s first of the season.

North Carolina kicker Grayson Atkins connected on a 48-yard field goal as time expired to enter the locker room with the Heels leading 31-17.

With 2:25 remaining in the first half, a strike from Van Dyke to Knighton went 60 yards for a touchdown. Knighton juked a North Carolina defender on his way to the end zone.