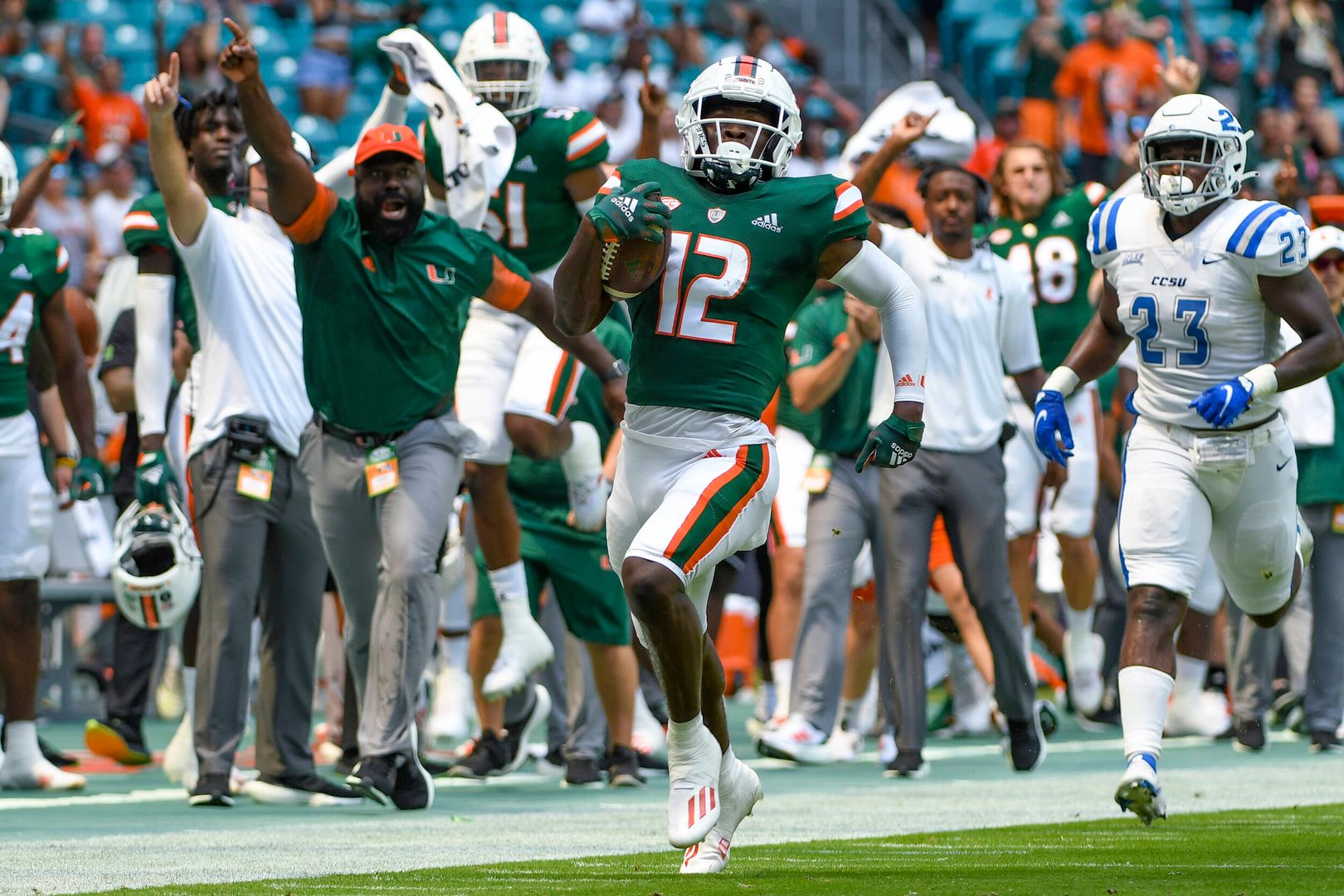 The Hurricanes totaled a program-record 739 yards of total offense, rolling past the Central Connecticut State Blue Devils, 69-0, in front of 44,019 fans at Hard Rock Stadium.

“I’m proud of our football team today. Obviously, against an overmatched opponent, I thought the most important thing today was Miami and how we played,” Miami head coach Manny Diaz said. “With all of the guys we were able to get in there, I thought that was key for us. I am obviously proud of both quarterbacks. In a situation where they both had to make their debut, I thought both guys handled the offense very well. We had very few procedural issues and I thought they distributed the ball very well and showed what they could do down the field. We talked about everybody around the quarterback playing better to help out that position. I think the depth that we have, with some of the weapons that we have, is really starting to show and that is exciting for the future.”

Van Dyke completed 10 of his 11 passing attempts for 270 yards and three touchdowns while Garcia finished 11-for-14 for 147 passing yards and two scores. Both quarterbacks orchestrated five scoring drives.

The Hurricanes opened the game with seven touchdowns on seven possessions for the first time since 2013 when Miami did so against Savannah State on Sept. 21.

One minute and 22 seconds later after the Hurricanes forced a three-and-out, Van Dyke wasted little time. The Glastonbury, Conn. native linked up with freshman Brashard Smith for a 75-yard pitch-and-catch score. The touchdown on the opening play of the possession marked the first of Smith’s career.

Following back-to-back scoring drives, Garcia swapped with Van Dyke. In his Miami debut, the freshman marched the Hurricanes down the field for an 8-play, 57-yard drive. Fellow rookie Cody Brown capped off the drive with his first career touchdown to put the Hurricanes up, 21-0.

On the ensuing possession, Garcia continued his strong start before Cam’Ron Harris flew past the Blue Devils for a 51-yard touchdown run.

Brown tacked on his second score, punching it into the end zone with 8:01 remaining in the half. Before the intermission, Harris recorded two more touchdowns. The junior running back scored on the ground before breaking free for an 83-yard receiving score.

After the intermission, Miami padded their lead with a trio of scores. Garcia, Romello Brinson, Jacolby George and Thaddius Franklin, Jr. all registered their first career touchdowns, highlighted by Brinson’s acrobatic one-handed 17-yard catch in the end zone.

Defensively, the Hurricanes notched their first home shutout since 2019, when Miami held Bethune-Cookman scoreless in a 63-0 victory on Sept. 14. On an afternoon filled with firsts, safety James Williams became the first freshman to rock Turnover Chain 5.0 after recording an interception moments after the halftime break.

“It’s high expectations because we’re at Miami, but at the same time…we’re built for this, we were born for this, we’re made for this,” Williams said. “We already know the ins and out, and the ups and downs that come with it. We’re ready to just work. We just want to play ball. We aren’t worried about what’s going on outside the facility.”

Miami kicks off ACC action at 7:30 Sept. 30 when the Hurricanes welcome the Virginia Cavaliers to South Florida.

“Everything gets condensed and packaged in tight,” Diaz said. “That is a very challenging thing against a team like Virginia. Year in and year out, Bronco Mendenhall and his staff are one of the harder to scheme against teams out there. It’s going to be a lot to digest for our players. We’ll meet as a staff first thing tomorrow morning, different than a normal Sunday. It’s highly urgent right off the jump.”