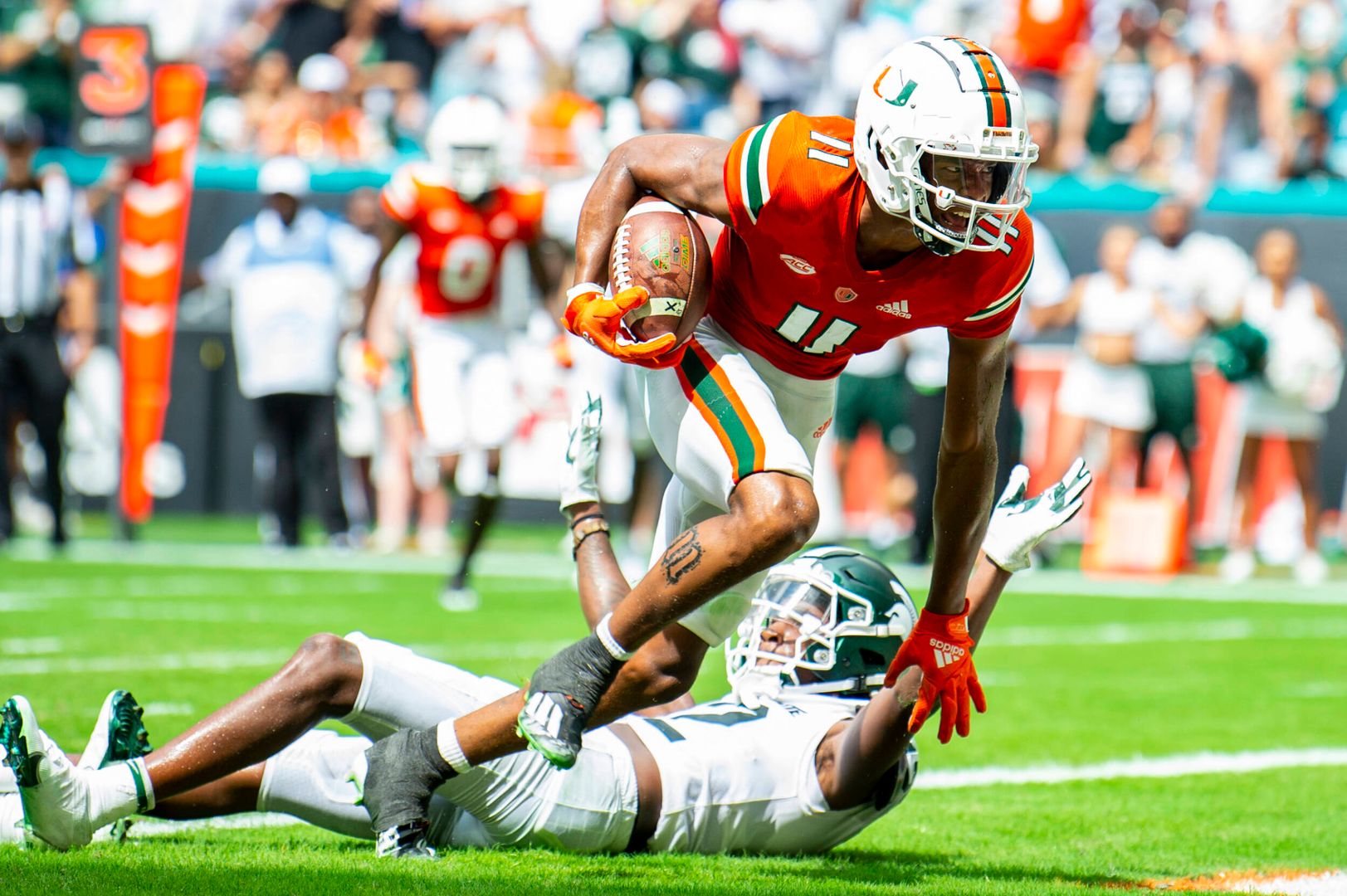 MIAMI GARDENS, Fla. – After rallying for a hard-fought win in their home opener against Appalachian State last week, the Hurricanes came into their nationally televised non-conference matchup against Michigan State hoping for a strong showing against the Spartans.

But while there were some memorable moments – including a career day for receiver Charleston Rambo and some big numbers for quarterback D’Eriq King – ultimately, Michigan State capitalized on Miami’s mistakes to leave Hard Rock Stadium with a 38-17 win over the Hurricanes.

The game took a toll on the Hurricanes physically, with King putting together a gritty effort despite needing attention from Miami’s medical team during the game and offensive lineman Jalen Rivers leaving early.

Now, Hurricanes head coach Manny Diaz says the Hurricanes have to make sure the game and Miami’s 1-2 start doesn’t take a toll on his team mentally.

He’s confident his group is connected enough that that won’t happen.

“The guys in that locker room, the moment that we just had in the locker room before I came [in] here, there is a bond there,” Diaz said in his post-game news conference. “There are things that we have to get corrected, as coaches, that we can take accountability for. We still have the ACC to play for and we have the Coastal [Division] to play for, so we have to take a look at our personnel.

“We have to make the decisions on who is getting what opportunities out there because there have been some surprises. There have been some guys that we count on that maybe aren’t performing enough. We have to analyze why that its and find the best team we can put on the field for the last three quarters of our season…This coaching staff will get that corrected and will get that fixed and we have guys in that locker room that want to stay together and be a family and fight hard for each other and fight our way out of this.”

Here, more of what the Hurricanes said they could take away from their game against Michigan State:

There’s no doubt the Hurricanes had an opportunity early to take control of Saturday’s game. But too many mistakes proved too costly for Miami to overcome – and Michigan State capitalized.

During one second-quarter sequence with Miami ahead 7-3, the Hurricanes dropped a wide-open touchdown in the end zone, were whistled for back-to-back holding penalties and then missed a field goal.

On its ensuing possession, Michigan State went on a 9-play, 80-yard scoring drive that gave the Spartans the lead. They would never trail again. 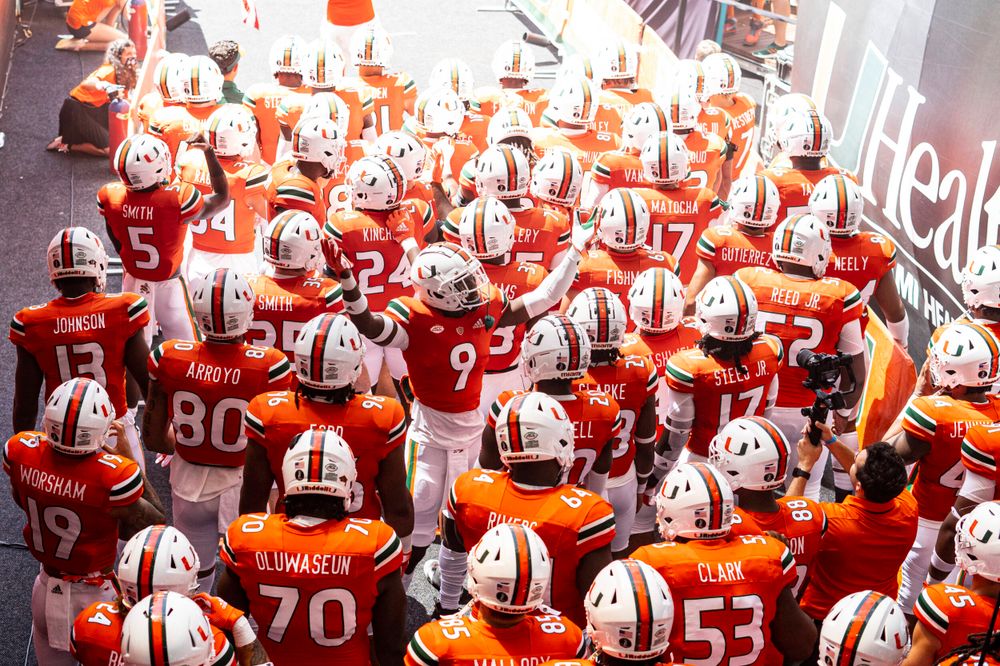 The Hurricanes, meanwhile, went on to finish the day with four turnovers and 10 penalties for 84 yards. There were more dropped passes and some mistakes on both defense and special teams that players and coaches know must be corrected, especially with conference play on the horizon.

“We certainly need to continue to address the fundamentals. We can’t make those mistakes in a game. I think the more curious part is that it is guys who do not have a history of dropping passes or missing tackles or some of those types of things,” Diaz said. “When you see older guys, guys that you count on, making those types of mistakes, it hurts you. At some point, you have to honor what the film says and you have to be able to play guys that can make those types of plays and play guys that can get people on the ground on defense.”

In last week’s win over Appalachian State, Miami made five trips into the red zone. They scored touchdowns just twice.

Against Michigan State, the Hurricanes got in the red zone three times, scoring touchdowns twice. A bit of an improvement? Yes. But it still wasn’t enough – especially when Michigan State scored on all five of its red-zone opportunities, managing touchdowns on four of those chances and a field goal on another.

“Turnovers and the red zone told the story today. Missing opportunities and not creating any turnovers hurt – they won basically all the critical moments of the game,” Diaz said. “Like I said, it was very disappointing. It was tough on the guys in the locker room. There are still a lot of tight bonds in that locker room and there are a lot of guys who want to play hard for each other and want to make this right. That is going to be our job as coaches to find a way to make it right.”

Since Diaz’s arrival in Coral Gables as Miami’s defensive coordinator in 2016, the Hurricanes have prided themselves on playing an aggressive, physical form of defense.

In fact, they’ve been among national statistical leaders in several categories during that time, including tackles for loss, sacks and total defense.

But through three games this season, missed tackles have taken a toll and Saturday was no different, with Spartans running back Kenneth Walker III often shedding defenders on his way to a 27-carry, 172-yard performance.

In all, Michigan State averaged 4.7 yards per carry and Spartans’ receivers totaled 201 yards after catch. That, the Hurricanes know, has to change.

“We’ll have to look at everything we do. We have a system of tackling that we have done for a long time that has yielded really good results,” Diaz said. “We tackled poorly in the secondary at some positions in the Alabama game. We tackled better last week against App State. This was, by far, our worst performance and obviously, from a defensive standpoint, it cost us the game.”

Since undergoing knee surgery to repair the ACL he tore in last season’s finale, King has made it abundantly clear he wanted to be there as best he could for his teammates.

After months of intense rehabilitative work, he was on the field for Miami’s season opener two weeks ago against Alabama. Saturday, he showed his toughness again, staying on the field and doing his best to lead the Hurricanes, despite a shoulder injury that sent him into the locker room briefly.

Next up: Central Connecticut State

Miami wraps up non-conference play against the Blue Devils at Hard Rock Stadium next Saturday before opening up ACC action against Virginia on Thursday, Sept. 30.

The redshirt senior was 38 of 59 for 288 yards with two touchdowns and two interceptions. He had Miami records in both completions and attempts in the loss and his performance, Diaz said, made a difference for his team.

“D’Eriq has been as courageous as they come. I think that’s why the team in the locker room is together. How can you quit on a guy who gives what D’Eriq King gives? The guy leaves everything out there and lays it all on the line for the University of Miami,” Diaz said. “I know, talking to him in the locker room after the game, he is hurting emotionally. He wants so badly for us to be great on offense. He is such a competitor and he is not going to be satisfied until we are.”

Rambo has a big day

Charleston Rambo transferred to Miami hoping to help set the tone in the Hurricanes’ receivers room and on Saturday, he did exactly that.

The redshirt junior had a career day, hauling in 12 catches for 156 yards with two touchdowns. His 12 catches also tied a Miami single-game record.

On one scoring drive, Rambo accounted for 70 of Miami’s 75 yards – including a 3-yard touchdown grab.

Still, like most of his teammates, Rambo wasn’t in much of a mood to celebrate his individual accomplishments, saying after the game he wants to see Miami’s offense continue to improve.

“It’s there, but it’s nothing right now,” Rambo said. “We took an ‘L,’ so that doesn’t matter. Just be better next week. Be better.”

Another big boot from Borregales

Andy Borregales has been Miami’s kicker for all of three games. Already he’s made an impact.

Last week, the freshman kicked a 43-yarder that was the difference in Miami’s win over Appalachian State. On Saturday, he bounced back after an earlier missed field goal to kick a 55-yard field.

That kick was just two yards shy of tying the Miami school record – which his brother Jose Borregales tied last year and shares with Michael Badgley and Danny Miller.

Time for the Hurricanes to dig deep

After splitting the first two games of a four-game homestand, the Hurricanes have the opportunity now to finish out the month of September at Hard Rock on a strong note.

Next week, Miami will host Central Connecticut State and on Sept. 30, the Hurricanes will open ACC play against Virginia. After that, conference play truly cranks up with games against North Carolina, NC State, Pittsburgh, Georgia Tech, Florida State, Virginia Tech and Duke still on the schedule.

The Hurricanes know they have to be better by the time those games start.

“I think we have a strong bunch. After the game, Gilbert Frierson talked to the team about staying together. That’s all we can do. We have to stand together. We know it’s us versus the world,” King said. “We know everyone is going to be talking negatively, but as a team, we have to have each other’s backs. We have to come into the building tomorrow and learn from this game. We have nine games left and we start conference [play] in a couple of weeks. We have got to get better and we have to stick together. We have over 100 people on the team, but I think we have enough guys to stay together and have each other’s backs and push through this difficult time.”

Added defensive end Chantz Williams, “Keeping our heads down right now isn’t helping anyone. So we are going back to the drawing board tomorrow to make sure we get everything fixed.”