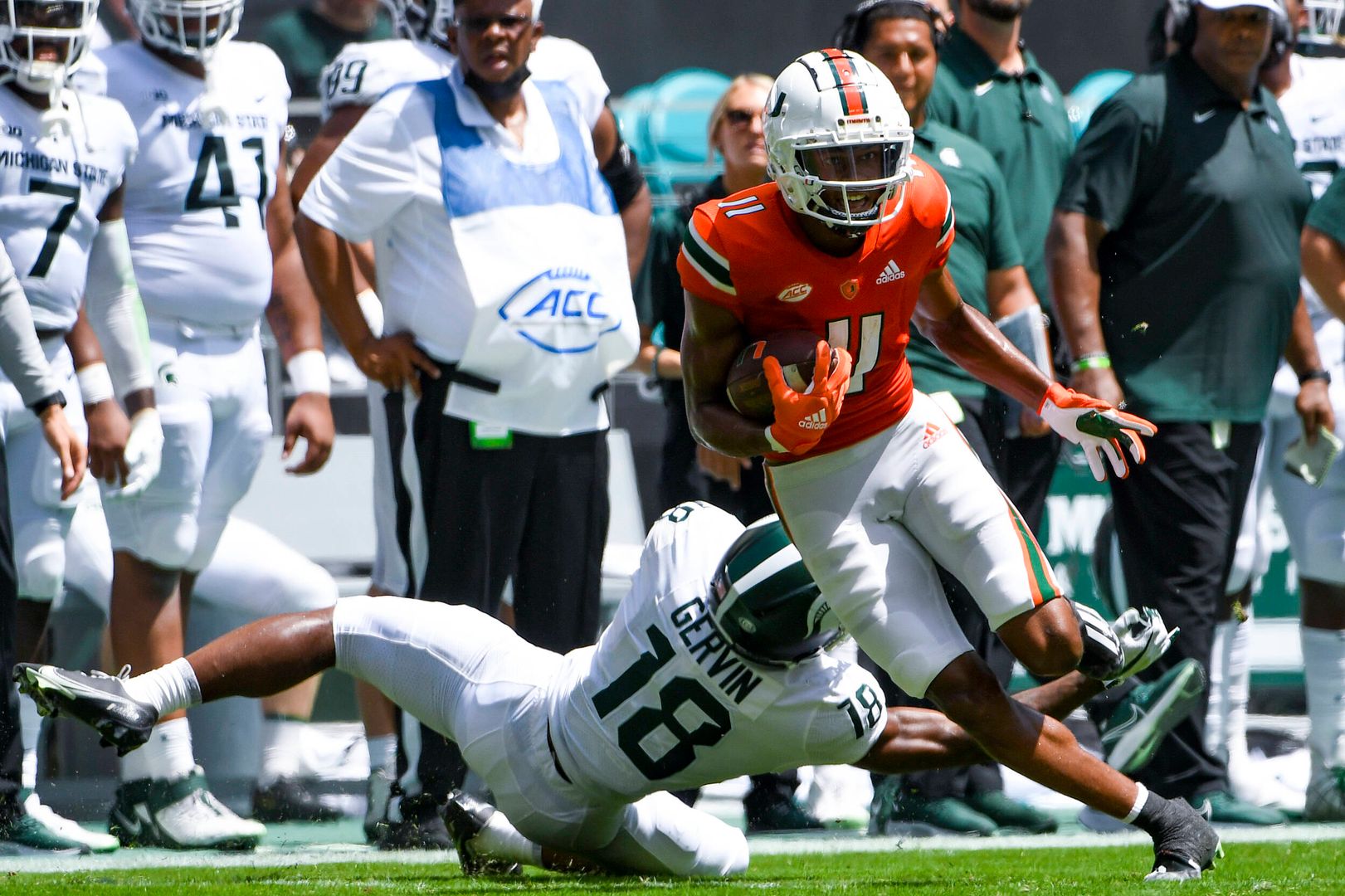 “Obviously, we are disappointed in our performance and disappointed in the outcome,” Miami head coach Manny Diaz said. “I have to give credit to Michigan State. Turnovers and the red zone told the story today. Missing opportunities and not creating any turnovers hurt — they won basically all the critical moments of the game. Like I said, it was very disappointing. It was tough on the guys in the locker room. There are still a lot of tight bonds in that locker room and there are a lot of guys who want to play hard for each other and want to make this right. That is going to be our job as coaches to find a way to make it right.”

Rambo became just the third Hurricane in program history with a dozen catches, joining Willie Smith and Phillip Dorsett. Smith established the mark against Maryland on Nov. 10, 1984, before Dorsett matched the total versus USF on Nov. 17, 2012.

The 6-foot-1, 185-pound wide receiver, who transferred from Oklahoma, tallied a career-high 156 yards and two touchdowns in his third game in the orange and green.

After a scoreless first quarter, Michigan State kicker Matt Coghlin broke the stalemate with a 23-yard field goal with 13:58 left before the half.

The Hurricanes (1-2) immediately answered the Spartans (3-0), marching down the field for a 10-play, 75-yard scoring drive. D’Eriq King and Rambo connected five times for 70 yards on Miami’s opening possession of the frame, capped off by the three-yard touchdown hookup. The score marked Rambo’s first as a Hurricane.

Two possessions later, Michigan State regained the lead. Quarterback Payton Thorne orchestrated a 9-play, 80-yard drive to go ahead, 10-7, with 6:10 remaining in the second quarter. Thorne linked up with junior running back Kenneth Walker III for the 9-yard score.

Next Up: Central Connecticut State

Miami wraps up non-conference play against the Blue Devils at Hard Rock Stadium next Saturday before opening up ACC action against Virginia on Thursday, Sept. 30.

Coming out of the break, the Spartans strung together their longest drive of the day. Thorne and Walker III led an 85-yard drive punctuated by an 11-yard catch by Jalen Nailor.

Once again, after the visitors found the end zone, Miami responded on its next possession.

In a span of two minutes and 15 seconds, King marched the Hurricanes down the field, finding Rambo for his second score of the game.

Michigan State extended its advantage, posting a trio of touchdowns in the fourth. Thorne tossed four touchdowns and Walker III, who entered Saturday fourth in the nation in rushing yards per game, notched 189 total yards of offense and a score.

“There were creating a lot of one-on-one tackling opportunities with their screen game,” Diaz said. “They were running harder through our tackles and we were running harder through contact and that’s on us. It’s very disappointing from where we’ve been throughout this year. Fundamentally, I thought that Walker, and the way that he ran, and the way that they got the ball to him through the screen game told the story. I don’t know that they completed a pass down the field to a wide receiver until the touchdown on the third down in the red zone after the interception. That will be the point of emphasis this week defensively.”

In the defeat, King completed a career-best 38 passes for 372 yards and two touchdowns. The sixth-year senior started 20-for-23 for 210 yards after connecting on his first seven attempts.

“D’Eriq has been as courageous as they come,” Diaz said. “I think that’s why the team in the locker room is together. How can you quit on a guy who gives what D’Eriq King gives? The guy leaves everything out there and lays it all on the line for the University of Miami. I know, talking to him in the locker room after the game, he is hurting emotionally. He wants so badly for us to be great on offense. He is such a competitor and he is not going to be satisfied until we are.”

Next up, the Hurricanes conclude their non-conference slate as Miami welcomes the Central Connecticut Blue Devils to Hard Rock Stadium on Saturday, Sept. 25. Kickoff is scheduled for 12:30 p.m on Regional Sports Network.

“It’s hard to see, but the guys in the locker room, the moment that we just had in the locker room before I came here, there is a bond here,” Diaz said. “There are things that we have to get corrected, as coaches, that we can take accountability for. We still have the ACC to play for and we have the Coastal to play for, so we have to take a look at our personnel.”