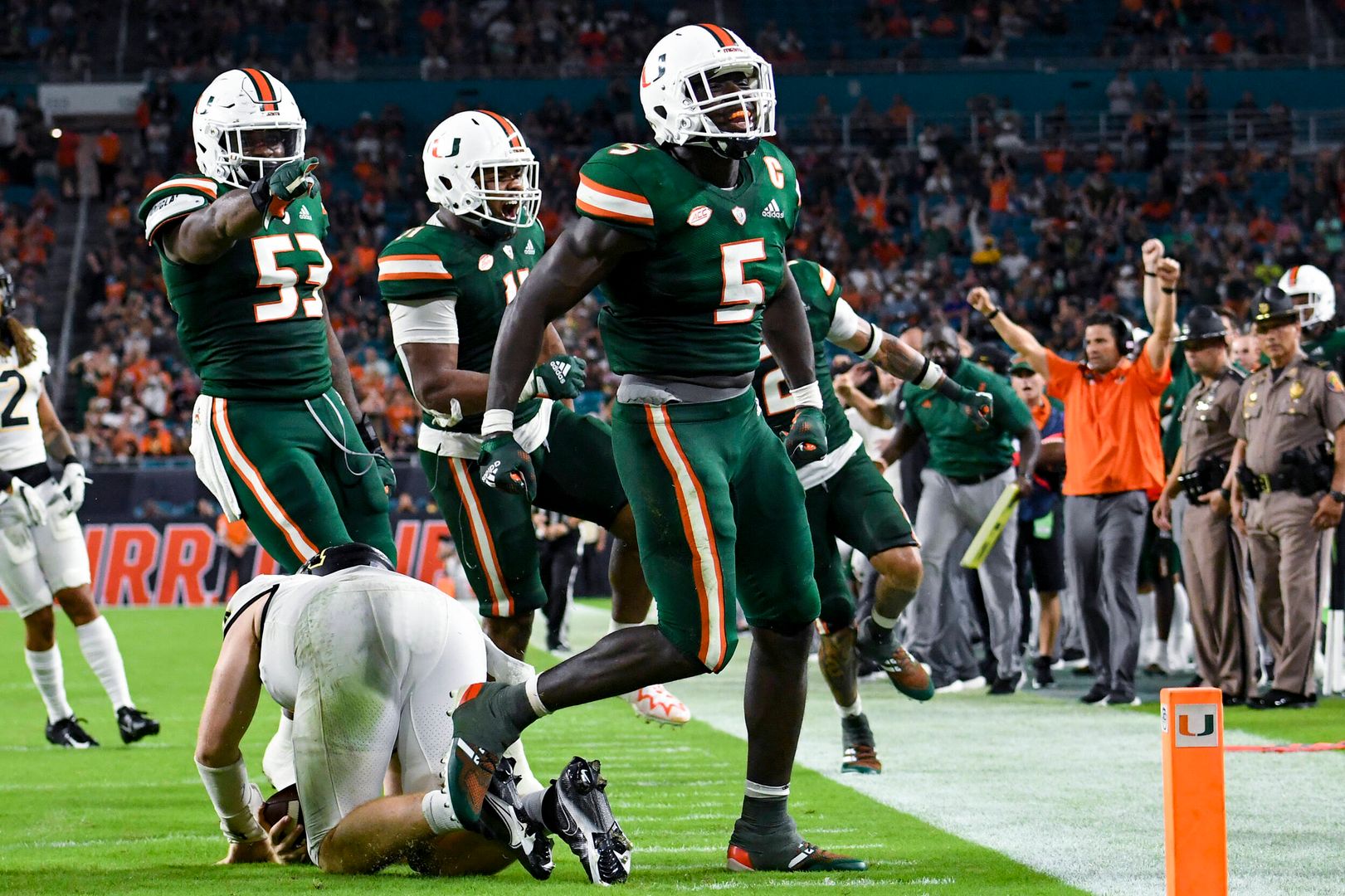 Borregales nailed three of four field goal attempts on the night, none more important than a career-long boot that put Miami ahead for good after a tense four-quarter battle with the Mountaineers.

“Like we said in the locker room, a win is a win,” Borregales said. “We fought hard. App State, they fought hard. We ended up coming out with a win. It’s a good step in the right direction.”

A season ago, Borregales’ older brother Jose won the Lou Groza Award as the top kicker in the nation while delivering a historic year for UM.  Fast-forward nine months, and it was younger brother Andy shining as Miami’s starting kicker.

Borregales connected from 38 yards earlier in the fourth quarter before his decisive 43-yarder.

“You know what you have, but you don’t know what someone’s going to do in that situation,” Diaz said. “To go in there in the fourth quarter like that, to bang out two clutch kicks that we had to have, that’s pretty special. We don’t want to put him in that situation that often, but to know that if you get in that spot, to know you have a guy that’s got the confident to make it…I think the entire sideline believed that kick was going to go in.”

D’Eriq King threw for 200 yards on 20-for-33 passing, Cam’Ron Harris and Don Chaney, Jr., each rushed for a touchdown, and Miami totaled 375 yards of offense despite struggling to score points in the red zone.

The Hurricanes improved to a perfect 14-0 all-time in home openers at Hard Rock Stadium since moving to the facility prior to the 2008 season.

Early on Saturday night, it didn’t look like there would be any need for late theatrics.

Miami started quickly, forcing a turnover on Appalachian State’s second drive before taking a 7-0 lead less than six minutes into the contest. A tipped pass from defensive end Chantz Williams at the line of scrimmage landed in the outstretched arms of a diving Amari Carter, and Chaney scored three plays later on his first rushing touchdown of the season.

But Appalachian State (1-1) showed its resiliency, putting together a nine-play, 69-yard touchdown drive on the very next series, setting the stage for a nail-biter for the 45,877 in attendance.

The theme of the night was set in the first quarter: when Miami scored, Appalachian State responded.

The Hurricanes recorded a safety on a botched punt to make it 9-7 and added a 27-yard field goal from Borregales to push their lead to 12-7 midway through the second quarter. On the very next play after the field goal, Jalen Virgil recorded a 100-yard kickoff return for a touchdown to give App State a 14-12 lead that the visitors would carry into halftime.

Next Up: Michigan State

The Canes continue a four-game September homestand when the Spartans visit Hard Rock Stadium next Saturday followed by CCSU on Family Weekend on Sept. 25 and Virginia in the ACC Opener on Thursday, Sept. 30.

“There are a lot of things we have got to clean up, especially offensively,” King said. “Defensively, I thought we played great all night. I have to play a lot better offensively. In the first half, we didn’t do a lot…we’ll get it cleaned up.”

The Mountaineers struggled to find success with their patented outside zone run game Saturday night, with Camerun Peoples leading the way on the ground (17 carries, 95 yards, one touchdown).

The Hurricanes (1-1) opened the third quarter by methodically marching down the field, finishing off a 75-yard drive with a 12-yard touchdown run from Harris.

But App State would not go lightly, taking a fourth-quarter lead on a touchdown pass from quarterback Chase Brice to Malik Williams with 5:48 to go.

Trailing 23-22, Miami delivered the final blow. The Hurricanes compiled their longest drive of the night (10 plays) when it mattered most, eating up the clock and pushing into Mountaineers territory.

A 15-yard rush from Harris on third and short kept Miami’s drive alive, while King completed passes to Harley and got more power running from Harris to set up Borregales, who nailed the longest field goal of his Miami career.

“This is what they do. This is App State. They go on the road and they take down people on the road. But they didn’t take us down, because the defense, who I thought played outstanding all night, gave up one drive in the fourth,” Diaz said. “App took the lead. Our offense responded with a great time to re-take the lead.”

Facing a 4th and 6 on its own 47-yard line, App State saw a Brice pass broken up by Tyrique Stevenson to seal the victory.

The Hurricanes continue a four-game homestand Sat., Sept. 18 against Michigan State. Kickoff is set for noon on either ABC or ESPN.