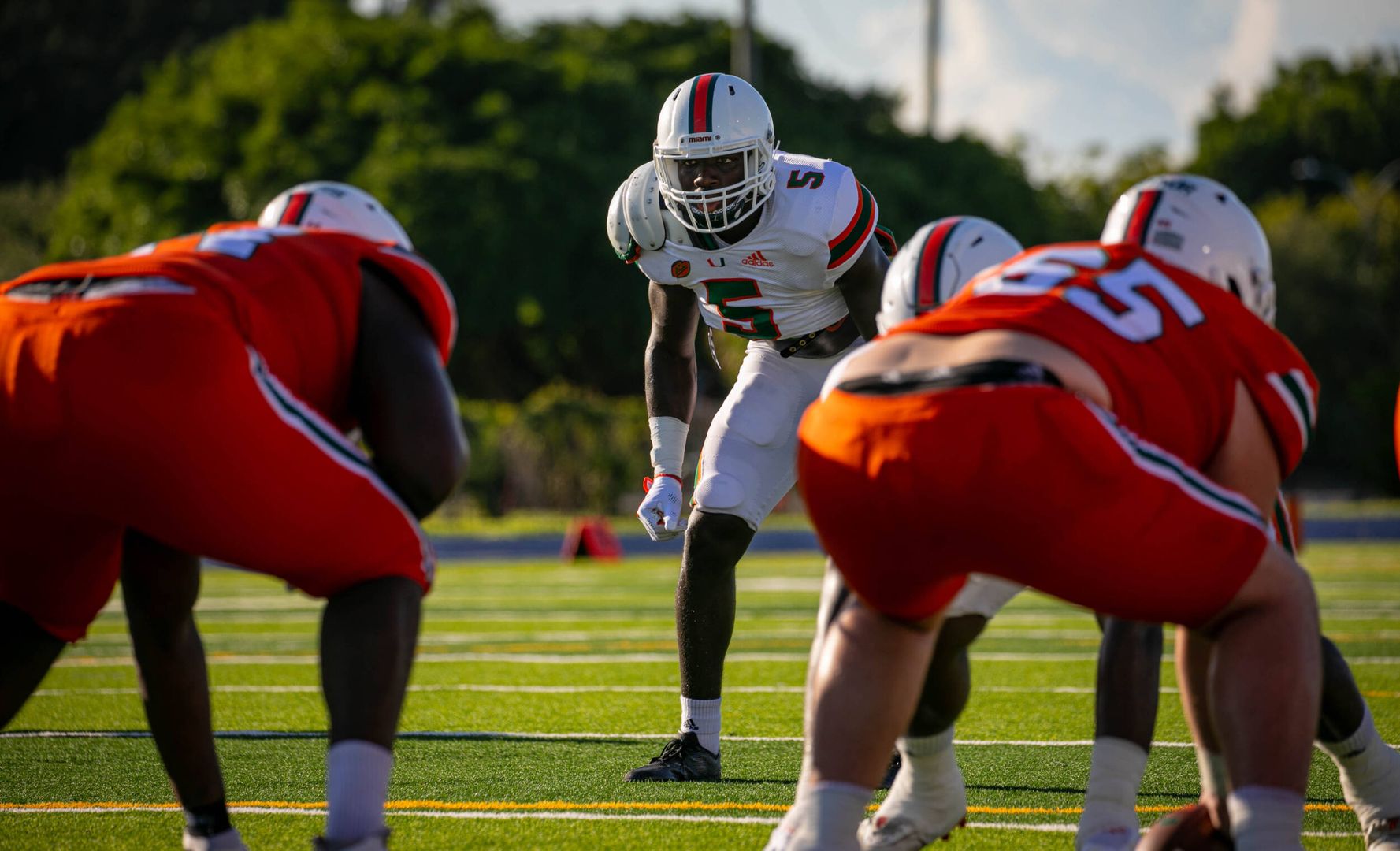 MIAMI, Fla. – It was, for the Miami Hurricanes, one last preseason test of sorts.

With two weeks of practice and one scrimmage already behind them, the Hurricanes took the field Saturday for their final scrimmage of camp – one players know coaches will study closely as Miami shifts gears and begins game preparations for its Sept. 4 opener against Alabama.

As one might expect, several Hurricanes found ways to deliver, whether they made a key play to extend an eventual scoring drive or whether they got behind the line of scrimmage to stop a quarterback in his tracks.

For head coach Manny Diaz, though, one group clearly had the edge.

“I saw improvement from scrimmage one, which is what you would’ve expected,” Diaz said. “[Quarterback] D’Eriq [King] got us going again offensively [with] an explosive play and a touchdown drive to get things going. But the night belonged to the defense. From start to finish, the [No.] 1 defense was pretty dominant tonight.”

Here, some additional notes on how Miami’s defense performed Saturday and other things the Hurricanes can take from their final scrimmage of camp.

1. The defensive line was disruptive

More than a few members of Miami’s defensive line made their presence known Saturday.

The group – and the rest of the defensive front – kept a steady pressure on Miami’s trio of quarterbacks and, in Diaz’s opinion, showed improvement from last week’s scrimmage.

“I thought our defensive line was excellent. Very disruptive,” Diaz said. “Silvera had a sack. McCloud had a sack, Elijah Roberts had a sack. Deandre Johnson had a sack. I thought [linebacker] Corey Flagg had a great scrimmage. [Linebacker] Keontra Smith [had] a PBU and a bunch of tackles. [Linebacker] Waynmon Steed had four tackles. [They] did some really good things. They made themselves hard to run the ball…[and] put the offense in some long yard situations where you could get in some pressure situations.”

It wasn’t just the defensive front that earned praise from Diaz.

Several of Miami’s strikers and defensive backs recorded multiple tackles on Saturday and that, the coach said, was also key after last week’s scrimmage. 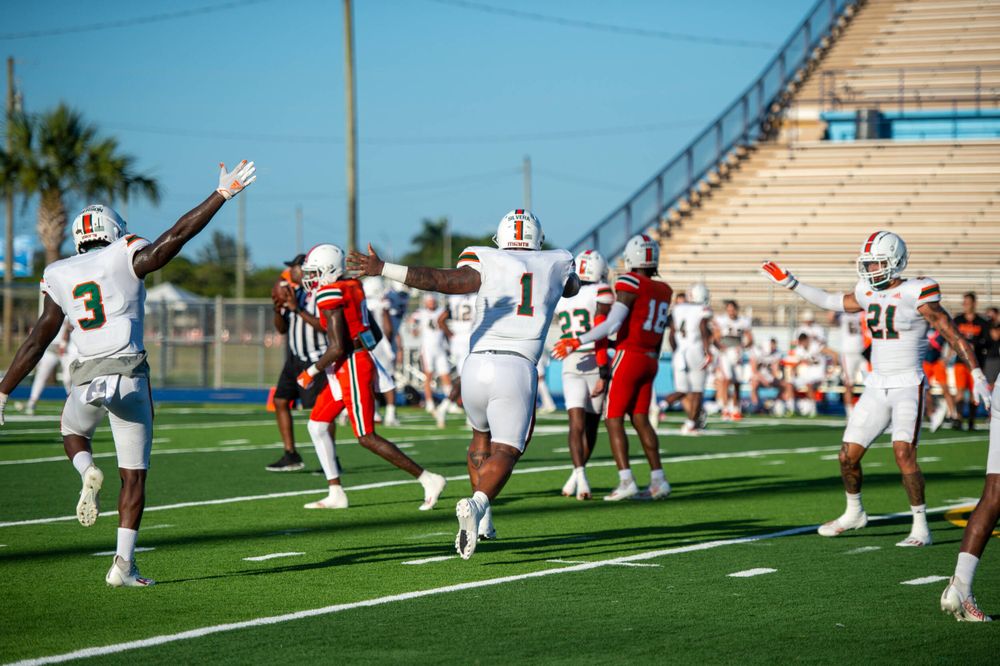 “Our tackling was night and day from last week. We tackled much, much better,” Diaz noted. “Very little run after the catch. A lot of guys swarming around the ball. A lot of confidence. Big strides from where we were a week ago.”

3. The Hurricanes believe in their quarterbacks

While they may have faced more pressure than they did a week ago, Miami’s trio of quarterbacks – King and freshmen Tyler Van Dyke and Jake Garcia – still put together a handful of scoring drives.

On his first throw of the scrimmage, King – who continues working his way back from a knee injury suffered in last season’s finale – connected on a 46-yard pass to freshman Key’Shawn Smith that helped lead to a touchdown.

Van Dyke later had a pair of touchdown throws and Garcia was 8 of 12 on his attempts, all of which were positives, Diaz noted.

“Obviously, we didn’t get D’Eriq a ton [of work] tonight [but he] hit the long one to Key’Shawn Smith, which is encouraging to see,” Diaz said. “Van Dyke led a drive at the very end and then finished with two touchdowns. Jake was 8 for 12. Again, a lot of those guys were facing the teeth of the rush pretty tough. I think they’re all continuing to show we can win with all three of them and we’ll continue into Bama prep now.”

4. The young receivers continue stepping up

Freshmen receivers Brashard Smith, Jacolby George and Romello Brinson haven’t been on campus long, but they’ve already made a big impression on teammates and coaches.

The “Three Amigos” as they’re now known on Greentree each had multiple catches Saturday and continue making their cases for spots in the rotation – something Brinson said last week is a goal for each member of their trio.

“We talk about it every day. We just want to play ball. We want to be on the field with D’Eriq King. We want to be out there, contributing to the things we’re going to do this year,” Brinson said. “We want to be part of it. We don’t want people to say ‘Oh, they didn’t do anything this year. Oh, they just sat on the sideline.’…We just go out there and make plays, let them see what we can do so when the time comes and we get thrown in that fire, we know what we can do.”

“Brashard [had] five catches. Jacolby [had] five catches. Brinson had 57 yards receiving. I mentioned Key’Shawn Smith. [Xavier] Restrepo had a couple touchdowns,” Diaz said. “We’ve got some depth. Like we said, now we’ve got to figure out ‘Okay who can we take to accomplish a mission? Now, we’ve got a mission to come together [for] and I think those guys will be a part of it.”

For the Hurricanes, preseason camp is officially over. In the next few days, Miami’s coaches will assess their roster, put together a depth chart and the work of preparing to face the defending national champions will begin in earnest.

And while the last two weeks may have been about individual players finding ways to better themselves, now, Diaz points out, it’s time for the Hurricanes to come together with a common goal in mind.

“Spring ball, summer workout, the first two weeks of training camp, it’s really about the improvement of the individual player,” Diaz said. “It’s as if you took a car, took all the parts apart and you’re trying to get every part as good as you can. Now, you have to build the machine back together again to go take it on the road.

“We know we’ve got a formidable challenge in Week One. We’ve got to look at our roster, look at the performances in the scrimmages, the individual performances, [and see] who we can put in what role to accomplish the mission we have to accomplish Week One, Week Two, Week Three, all the way to Week 12 to get ourselves [to the ACC Championship Game] in Charlotte. That’s what the coaches will be spending the next 48 hours doing. We got some good work in tonight. I’m excited where we’re at.”