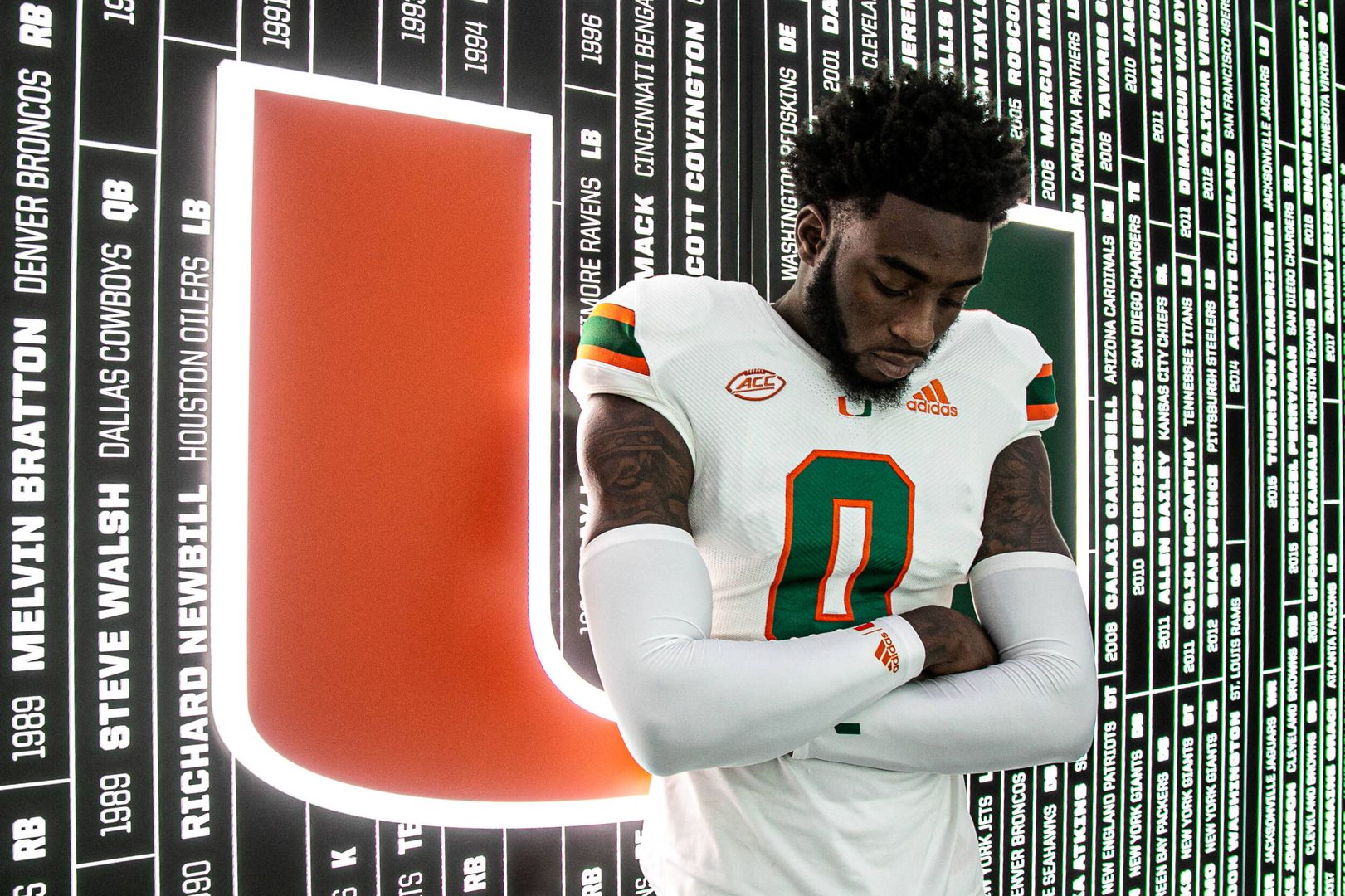 Not when, as an aspiring youth league player, he was told his weight class wasn’t available and the only way he could join the team at his local Boys & Girls Club was by playing with older, bigger, faster kids.

And not last week when, during his very first scrimmage as a Miami Hurricane, he was called on to make a catch, in traffic, on the offense’s opening play.

In both instances – and so many more – Brinson made sure his presence was felt.

He’s determined to keep that trend going now that he’s suiting up at his hometown program.

“If you’re from Miami and you’re putting on for your own city, everyone looks at you like you’re a hometown hero. That’s very special,” said Brinson, who sports a 305 area code tattoo honoring his hometown on his leg. “I know I’ve got the younger kids looking up to me, the ones in high school, the ones I used to play with. It’s just different when you’re putting on for your city and kids that are younger than you can say ‘I can do that, too.’ It’s very special…It means a lot to play at Miami.”

A little more than three months into his college career, Brinson is already doing his best to make sure he honors the commitment he made to both the Hurricanes and his community.

He was up bright and early for his first workout as a Hurricane – even if he soon discovered some of the conditioning and running drills were quite an adjustment from high school.

He’s spent hours studying Miami’s playbook. He was a presence at several of the Hurricanes’ community outreach events this summer and he’s already forged a tight bond with fellow freshman receivers Jacolby George and Brashard Smith. 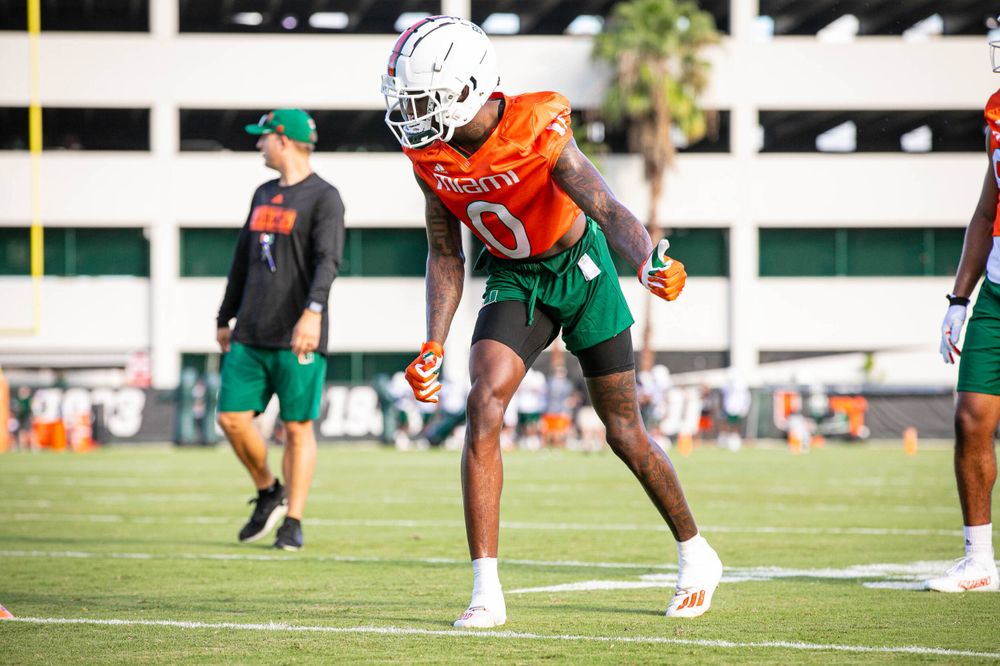 The three – who also happen to be roommates – are pretty much inseparable and have already been dubbed “The Three Amigos” by teammates and coaches.

Each receiver, Brinson believes, has the potential to work into rotation sooner rather than later.

“I want to see all of my brothers on the field together. We try to stay together, compete together and learn together so when the time comes, we’re ready to go,” Brinson said. “We just compete every day, in and out…We know the playbook now and everything is just rolling. We’ve just got to make plays. Once you make plays, you get on the field and play…We want to be out there, contributing to everything we’re going to do this year.”

All three contributed during Miami’s first scrimmage, with Brinson helping set the tone on the offense’s first play.

He finished the day with four catches for 73 yards and his performance earned praise from receivers coach Rob Likens, who said he’d been impressed with how well Brinson has handled some of the tests the freshman has faced during his first weeks on campus.

“I thought he performed outstanding. As a matter of fact, the first play from scrimmage, we threw him a slant and he caught it, contested, with a guy draped all over him,” Likens said. “Actually, I think there was a penalty on the play and he still caught the ball. That was great for him to experience. His first live scrimmage play, at Miami, in college, and he makes a contested catch across the middle of the field. For a young guy, that’s not easy to do, but he did it. He blocked extremely well, showed his physicality and didn’t back down from anybody, which is also hard for freshmen to do sometimes to upperclassmen. Just very proud of him.”

Still, as well as he played in his first scrimmage, Brinson understands his work at Miami is just getting started. And he knows pushing for playing time against older, more experienced players at his position is going to be a challenge.

But when things get tough, he thinks of his mother, Tracy Arinh, who has been the guiding force in his life and his older cousin Anthony Holloway, who helped introduce him to the game.

The two played defensive end on that first youth-league team and the rush of teaming up to chase down quarterbacks instilled in Brinson a love of the game that hasn’t diminished, even when he moved from the defensive side of the ball to the offense.

There, Brinson won three state championships and drew interest from some of the biggest names in college football including Alabama, Clemson, Florida, Georgia, LSU and others.

But Miami – the “Great Ole U” as Brinson affectionately calls his new home – loomed large.

Brinson wanted to be part of the program’s tradition. He wanted to play in offensive coordinator Rhett Lashlee’s high-octane system. And he wanted to make sure his family and friends had the opportunity to easily watch him play any time they wanted.

“I mean, my family is right down the street from [Hard Rock] Stadium,” he said with a smile.

And, Brinson notes, he wants to make sure other aspiring young football players from his Opa-Locka neighborhood learn from his experience.

“I remember when I was in their shoes. I’d go to the park and try to sneak my way in to get close to the players who’d come visit. Get some pictures, ask them questions, stuff like that,” Brinson said. “I want to try and be a big brother to everybody. I never had one of those that told me about this or told me about that. I kind of had to learn everything on my own. It’s God’s gift to be able to [give back]. That’s what it is.”