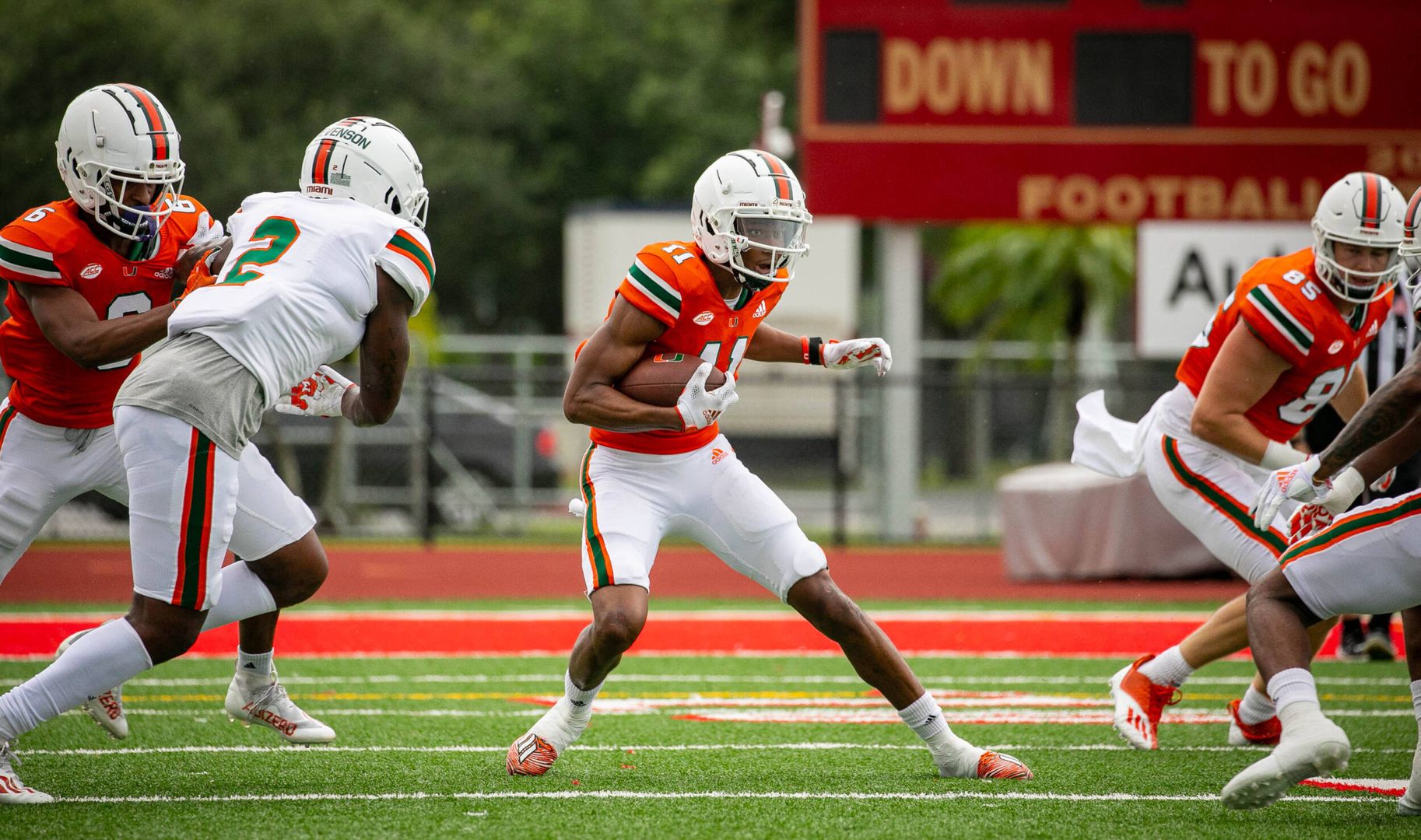 MIAMI GARDENS, Fla. – After a little more than a week of workouts on Greentree, Sunday marked one of the first significant tests of preseason camp for the Hurricanes: a scrimmage.

Full pads were donned. Big plays were made. And, Miami head coach Manny Diaz said, his players had an opportunity to compete in an environment a bit more similar to the ones they’ll face on Saturdays this fall.

And for one player in particular, the scrimmage was especially significant.

“Guys played hard, but the story is it’s great to see D’Eriq King,” Diaz said of Miami’s veteran quarterback, who continues working his way back from a knee injury suffered in last season’s finale. “I thought he was phenomenal running the offense…Guy’s a tough guy to defend.”

Here, some additional notes on King’s performance, along with some of what the Hurricanes can take from their first scrimmage of the 2021 season as they move into the second week of camp.

Since tearing his ACL last December, King – Miami’s unquestioned leader on and off the field – has made it clear he had every intention of being ready to play in the Hurricanes’ season opener against Alabama on Sept. 4.

After seven months of intense rehabilitative work, King led the Hurricanes through offensive drills when Miami opened camp earlier this month. Sunday, he took another step forward in his recovery, participating in his first scrimmage since getting hurt 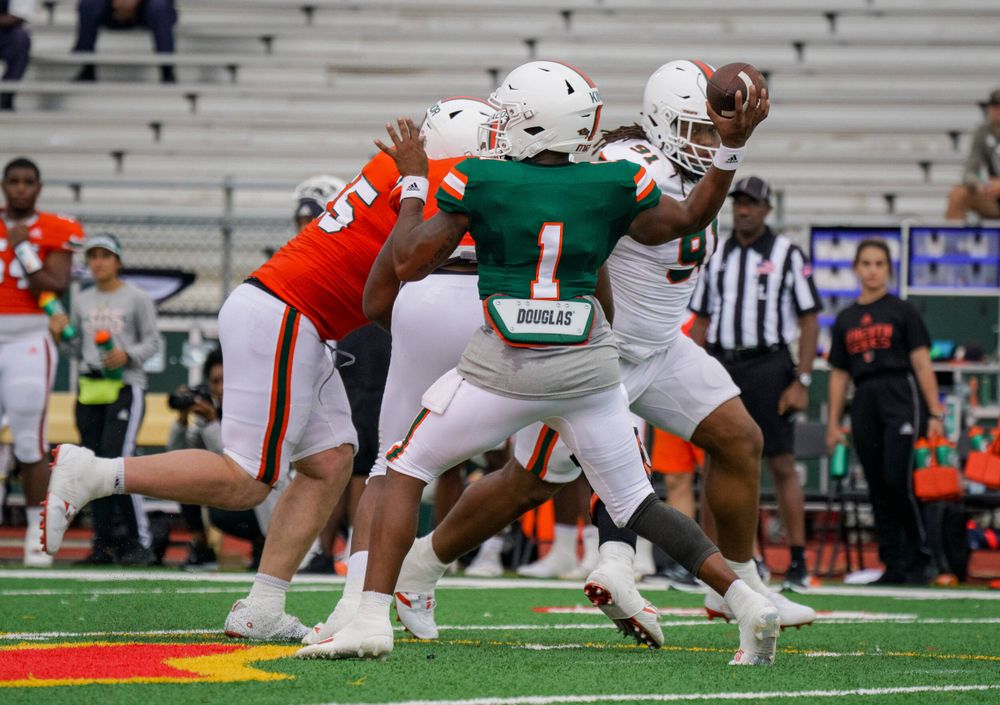 The redshirt senior completed 12 of his 16 passes for 124 yards and two touchdowns. During one point in the scrimmage, he had nine straight completions.

It was a performance that, of course, energized teammates and coaches – and had the quarterback himself smiling.

“It was a good feeling to get back out there in like a real-game situation,” King said. “I felt pretty good…I was so happy driving here today to do the scrimmage, first time we were really live, guys were taken to the ground. We had referees out here. It was a real-game situation. Everything felt good and I felt comfortable again. It’s a really good feeling.”

2. The receivers stepped up

King and the rest of Miami’s quarterbacks had plenty of help Sunday from more than a few of their playmakers, including some of the newest faces in the Hurricanes receivers room.

Freshman Jacolby George had a big night, catching seven passes for 127 yards with a touchdown, while fellow freshman Romello Brinson had four catches for 73 yards.

Charleston Rambo, a transfer from Oklahoma, had one of the biggest plays of the night, a one-handed 27-yard touchdown grab that elicited plenty of cheering from the offense. He finished with 60 receiving yards on the night.

“It was spread out throughout a lot of numbers,” Diaz said of the receivers’ productivity. “Charleston Rambo had a touchdown catch, 60 yards receiving, a beautiful catch in the end zone. Jacolby George, [one of] the young guys, seven [catches] for 127 [yards] with a touchdown on a slant. Romello Brinson four [catches] for 73 [yards]. Good to see Pope, three [catches] for 56 [yards]. Brashard [Smith] had a couple catches for 30 [yards] as well and it wouldn’t be a scrimmage without [Xavier] Restrepo making five catches. The guy does it every time we scrimmage.”

Added King of the receivers, “I love those guys. They make plays every day in practice. To come out here in a real-game setting and see them make plays, it’s really encouraging. I’m proud of them. I’m happy for them.”

While several of Miami’s defensive players made plays in the scrimmage, Diaz specifically highlighted the performances of two veterans in new roles.

Both earned praise from their coach.

“Up front, Keontra Smith, I think he stood out all camp. He had four tackles, a sack, a PBU [and] made a big tackle where it really felt like we had a change in momentum, got the defense back going again and got everybody fired up on that sideline,” Diaz said. “Zach McCloud had a great sack late in the game on a long-yardage type situation. Those guys up front really stood out.”

Earlier this week, McCloud – who had 27 tackles, two sacks, a forced fumble and a fumble recovery last season – said he felt the transition to his new spot has been going well.

“It’s beautiful. It’s been so quick. I had 15 practices in the spring to get a really good baseline understanding of the position. I knew the ins-and-outs and I could do everything really well,” McCloud said. “What I worked on in the summer was being able to apply the technique when I was dead tired. Coming out right after we got done conditioning, I’d do the drills and stuff until I couldn’t do any more. Now I’m in a place where I’m taking those same things and applying them to real bodies in practice. I’m having a lot of fun seeing how it all comes to life.”

During spring workouts, freshman kicker Andy Borregales showed he had the ability to make clutch kicks when his team needed them. 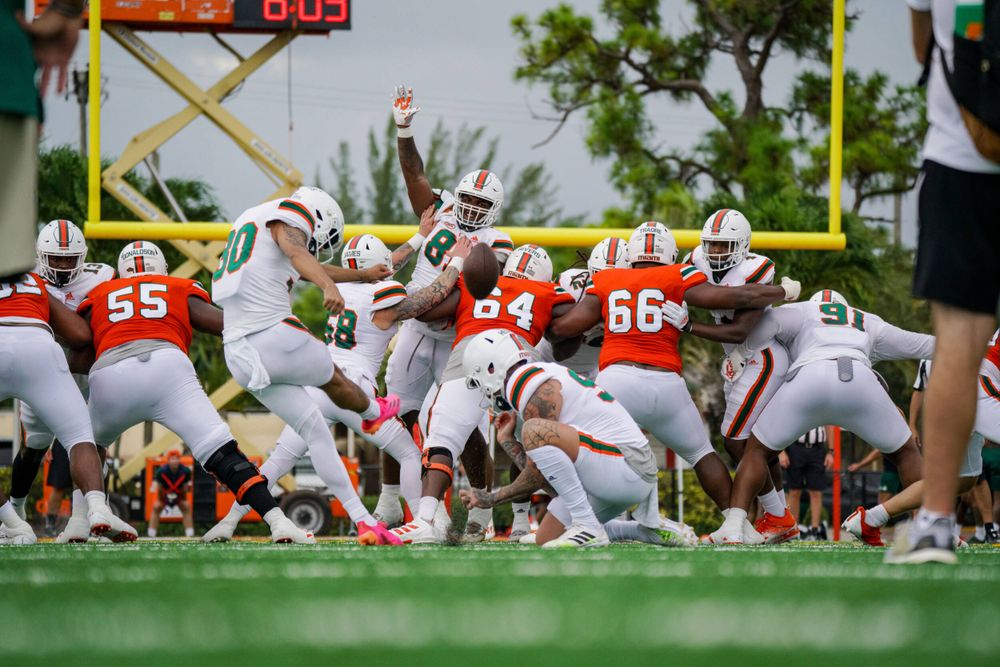 The kicker didn’t miss any of the kicks he took in scrimmages at Hard Rock Stadium. He picked up right where he left off on Sunday. Borregales connected on both of his field goal attempts, including a 37-yarder and a 30-yarder and was a perfect 4-of-4 four on point-after attempts.

5. One scrimmage down, still lots of work to do

The Hurricanes have worked their way through nine practices now and while Diaz said he’s seen lots of positives during those workouts, he made it clear Sunday there is still work to be done.

Players and coaches are set to return to Greentree this week and will have several more practices before their next scrimmage. It’s time now, their coach said, for them to build on what they’ve done early in camp.

“I told the team, we’ve practiced nine times. There’s evidence on both sides of the ball [that] this could be an outstanding football team,” Diaz said. “But there’s also evidence on both sides of the ball that we’re not quite there yet. We’ve hit them all camp that greatness comes from being consistently good. You’re always going to have that tug-of-war during camp where one day the defense edges it, the next day the offense edges it. When we’re both executing and playing at the high level, I think that’s what this week is going to be about. Let’s take that next step and not be satisfied with being good. We think greatness is available.”