CORAL GABLES, Fla. – As his teammates ran out onto the field around him, Mike Harley paused.

The fifth-year senior took a deep breath, whispered a prayer of thanksgiving, and let the moment wash over him just before he too sprinted onto Greentree to start the first practice of his last season as a Miami Hurricane.

“Yeah, it really hit me,” the receiver said. “I don’t know about the other guys, but it hit me.”

Harley wasn’t the only one who had a moment as the Hurricanes opened preseason camp Friday.

Quarterback D’Eriq King, who in January had surgery to repair the knee he injured in Miami’s season finale last year, felt plenty of gratitude, too.

As he went through warm-ups, he couldn’t help but recall how there’d been weeks where even standing and walking felt challenging. Now, after months of work with Miami’s physical therapy and athletic training staffs, King was again able to run, cut and throw the ball the way he always has.

And while there were more than a few plays where King had the opportunity to prove he looked and felt like his old self – including a late touchdown run where he eluded multiple defenders – one stood out in particular.

“Right before I pulled the ball, I was talking to my [physical therapist] Joe [Girardi] and I was like ‘I hope they give me a pull read so I can show you how I’m doing,’ and it happened,” King said. “I wanted to get out there and run around, just be me and not worry about anything else.” 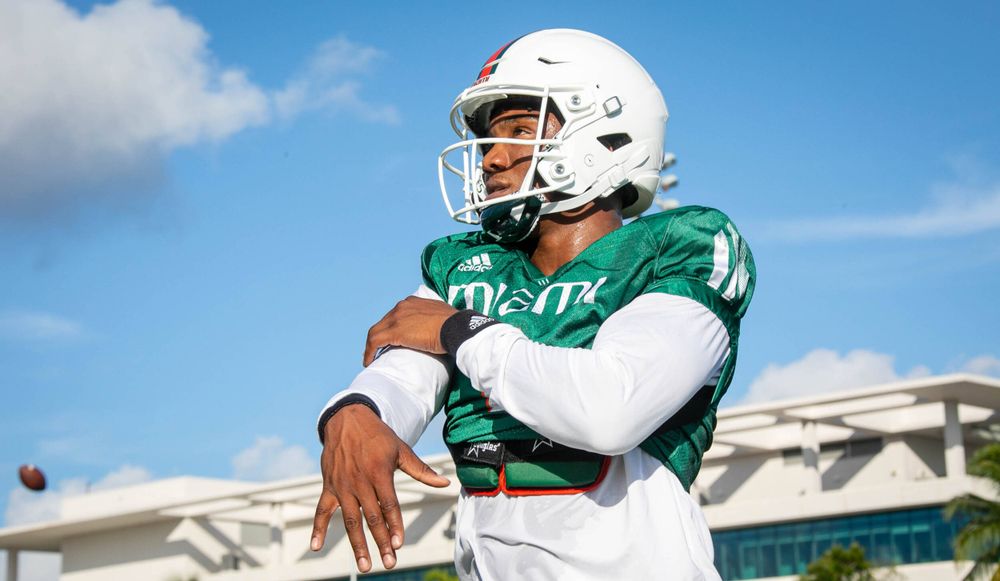 How did he feel afterward?

“It felt real good running around, trying to make somebody miss,” he smiled. “It felt normal.”

For his teammates and coaches, seeing King doing what he does best was a boon – even if the quarterback had to shake off a little rust early during Miami’s two-hour practice.

“We came out during the first period with the team and I caught the first ball. It was a hitch. And it’s so crazy, I caught the ball, turned upfield and then I looked D’Eriq King in the eyes and was like ‘Get the ball up. What are you doing? Get the ball up,’” Harley laughed. “I came back and was like ‘Man, I caught the ball from D’Eriq.’ And then I caught another one. And another one. Then toward the end, when I saw him take off and score, I was like ‘You’re able to run?’ and he said ‘Yeah, bro.’ It’s so amazing. You just saw all the dedication and hard work he put in and how he stayed positive to beat all the adversity he’s been through. It was a good feeling.”

Said Hurricanes head coach Manny Diaz, “It looked like nothing had happened. You see the guy spin some of the throws in there. What I really liked, and I felt like he was intentional a couple times, he took off and he ran and we’re going to be a quick whistle – especially today, we were just playing tag – but you could see he wanted to go and know he could go and back up what he’d done with our training staff and our PT staff and our strength staff in the summer…it looked good to me.”

Be There For Kickoff!

King’s return was just one of the storylines from Friday’s opening practice.

The session also marked a return of sorts for Diaz, who this offseason announced he planned to resume play-calling duties for Miami’s defense.

At last month’s ACC Kickoff event in Charlotte, the coach shared with former Hurricanes coach Mark Richt how taking a more hands-on approach with Miami’s defense has made him even more competitive.

His players said they felt that competitive fire throughout Friday’s practice.

“I think it’s the best thing for us, honestly,” said safety Bubba Bolden, a preseason All-ACC selection and Miami’s returning leading tackler. “I feel like everybody has that sense that he’s the head coach, so it’s more serious. But at the same time, he’s our defensive coordinator. Everybody respects him. When he’s in the building, when he’s in our position rooms, everyone’s locked in and I feel like that’s going to make us better and more attentive to little things. He gives us all the confidence in the world to go out there and play. You see that competitive fire…he’s going to run down the field with us and that’s what I love.”

As exciting as Miami’s first practice was in so many ways, the Hurricanes understand the next few weeks will be a challenging grind.

Practices will get harder. The heat on Greentree will only intensify, especially when the team moves to morning workouts. Starting jobs are at stake. Competition will only get tougher.

But Miami’s veterans know something else will happen in the coming weeks: the Hurricanes will have the opportunity to build the kind of bonds they know will carry them not just through their opener against defending national champion Alabama on Sept. 4, but through the entirety of the season.

And that, they say, is nothing to take for granted as camp continues.

“I want to see us really trust each other more. If we can all have trust and we can all be on the string, know the person next to you has your back, no matter what and you don’t have to worry about this, that or the other, I feel like that’s going to take us farther than we can expect,” Bolden said. “I just want everybody to come together, not let any certain moment knock you off your game and just keep having fun. We’re blessed to be here. We’re playing football again. Everybody should be excited.”

Added Harley, “I want to see us bond together, just everyone knowing they’re not out there by themselves. Just us winning the mental battles, like I’m seeing. I want to see us do everything together and know we’re going to compete at the highest level, but it’s all love at the end of the day…For the seniors and super seniors, we can’t get this back. We’re just trying to take advantage and have fun together.”