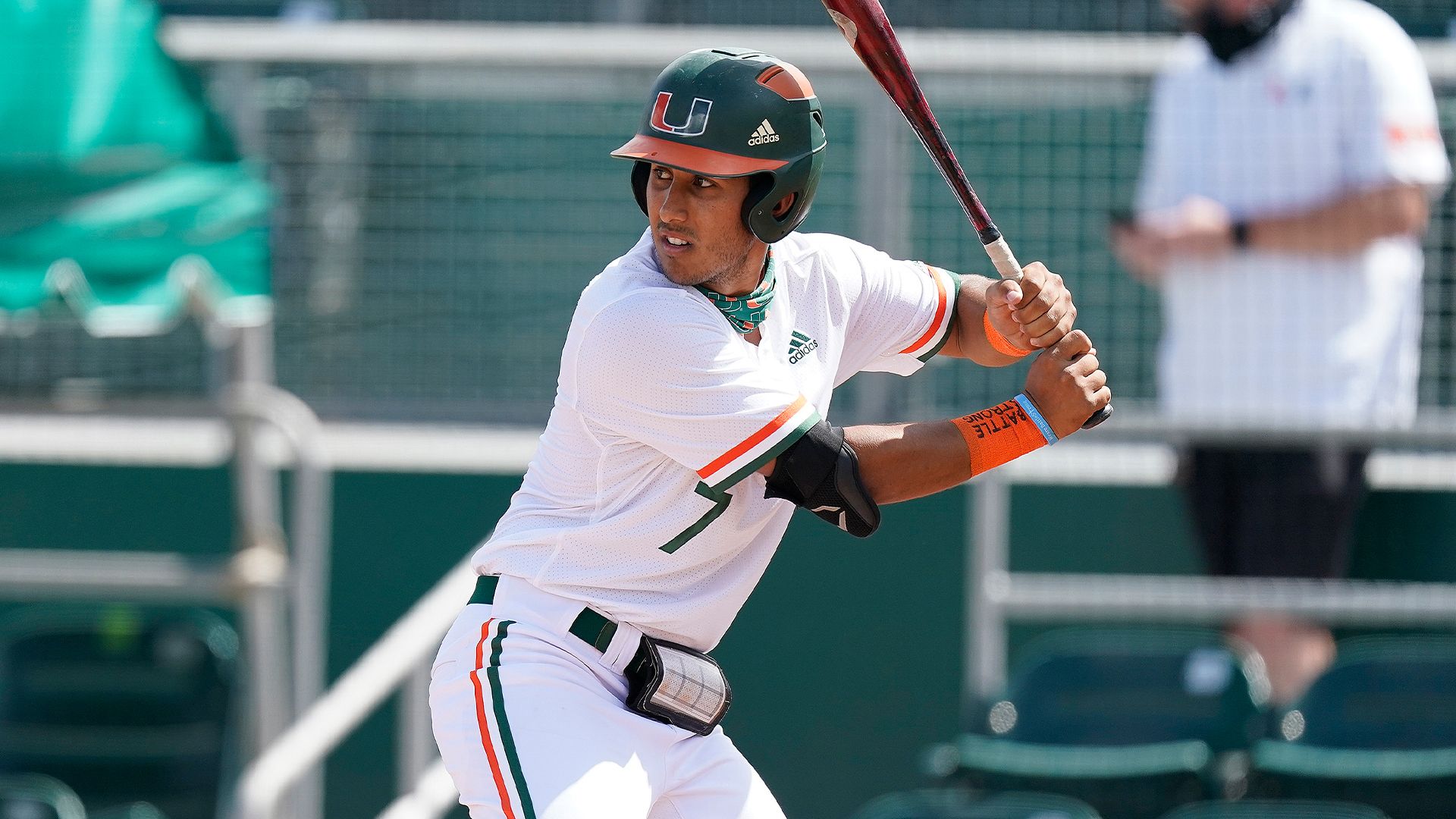 Vilar Selected in 15th Round by San Diego

CORAL GABLES, Fla. – The University of Miami’s Anthony Vilar was the third Hurricane selected in the 2021 MLB First-Year Player Draft, as the San Diego Padres drafted him as a catcher with their 15th round pick.

Vilar, who was selected with the 460th overall pick, played a key role for the Canes as a third-year infielder in 2021.

The Miami native was a fixture at second base, starting all 54 games for the Canes. Vilar was a steady offensive force in the top third of the Hurricanes’ lineup, batting .275 with 40 runs scored, nine doubles, five homers and 28 RBI. He tied for second on the team with a .398 on-base percentage and posted a .789 OPS. Vilar ranked fourth on the team with 13 multi-hit games and was fourth with seven multi-RBI performances.

After opening the season 1-for-16, Vilar got hot the rest of the way batting .293 with eight doubles, five homers and 27 RBI. The Miami native homered three times over four games from March 7 at NC State through March 13 vs. Wake Forest. Vilar was the hero in Miami’s 3-2 victory over FGCU on April 14, delivering a walk-off RBI single to keep the Hurricanes undefeated in midweek games.

Vilar started all 16 games at shortstop in a shortened 2020 college baseball season, hitting .297 with a team-high five doubles and two homers. Vilar had 12 runs scored and 15 RBI, was 3-for-3 in stolen base attempts, slugged .469 to rank third on team and led the Canes with six multi-hit games while tying for the team-lead with four multi-RBI performances. He also posted a team-best 10-game on-base streak and played solid defense at short in place of an injured Freddy Zamora.

As a freshman in 2019, the 5-foot-10 infielder started all 61 games, making 50 starts at second base and 11 at shortstop. Vilar hit .291 with 12 doubles, a triple, five homers, 49 runs scored and 39 RBI. He tied for the team lead with 22 multi-hit games and was third with 11 multi-RBI performances in his debut collegiate season.

Vilar, who was rated the No. 20 prospect in the ACC for his class by D1 Baseball, was previously selected in the 37th round of 2018 Major League Baseball Draft by the Chicago Cubs after an excellent prep career at Westminster Christian.

An accounting major, Vilar has earned two Athletic Director’s Honor Roll awards and is a four-time Book Buster Club recipient. He is a two-time All-ACC Academic selection and has been named to the ACC Honor Roll twice in his career.

He joins catcher Adrian Del Castillo (2nd round, Arizona) and right-handed pitcher Jake Smith (6th round, LA Angels) as Hurricanes selected in the 2021 MLB Draft. A Miami Hurricane has been picked in 48 consecutive drafts dating back to 1974.