CORAL GABLES, Fla. – Baseball and summer were meant to be together.

From the majors to little league, the sport and season have gone hand-in-hand for generations. A year ago, summer baseball was halted due to the COVID-19 pandemic, but 15 Hurricanes are competing in leagues across the country this year and they are excited for the opportunity to continue playing the game they love.

“I’m most excited about being able to go play baseball in a vacation destination against some of the best talent in the nation,” right-handed pitcher Andrew Walters said. “I get a chance to continue to improve and have a good time in a new place.”

Walters is one of six Hurricanes in the Cape Code League. The right-hander and infielder Yohandy Morales left for the Cape at the start of July and joined the Wareham Gatemen. Right-handers Alex McFarlane, Daniel Federman and Victor Mederos play for the Chatham Anglers, while right-hander Jake Smith pitches for the Cotuit Kettleers.

The summer ball experience is different from what the Hurricanes are used to at Miami. Beyond not having classes to attend, the Canes are expected to do a lot of things on their own. Strength training, arm care and extra work are examples of what players need to handle independently, similarly to life in professional baseball.

“It is very different because you are on your own when it comes to lifting and running and eating,” Mederos said. “So, you really have to be on track so that you don’t lose everything you have already gained.”

Arguably the premier summer baseball league, the Cape Cod Baseball League fields an outstanding collection of talent every year and that provides an opportunity for the Canes in the Cape to test themselves against the best on a daily basis.

“I’m most excited about developing into a better player and gaining more experience playing against really good talent up here in the Cape,” McFarlane said. “I also think summer ball can help develop relationships and make you a better teammate because you are getting to know a new group of guys.”

The final line from Alex McFarlane's (@CanesBaseball) second outing of the season: pic.twitter.com/aZDIoO7OLW

Walters added, “Summer ball gives you a chance to get more reps against a talent level that’s the same as D1 baseball and it’s a chance to get better coming into next season. As a person, it’s an experience that most people don’t get to have and I am excited to get to play in the Cape this year.”

Walters used his high-powered fastball to post a 1.46 ERA and 36 strikeouts over 24.2 innings pitched in his debut season with the Canes. But the big right-hander is headed to the Cape with a plan to improve ahead of the 2022 season.

“I want to develop a good changeup this summer and get comfortable with it against a live hitter,” Walters said. “I also will get more reps with my other pitches against elite hitters and that can only help me get better.”

There are three Canes in the Northwoods League, with CJ Kayfus and Jose Izarra on the Wisconsin Woodchucks, while Dominic Pitelli plays for the Kalamazoo Growlers. Wisconsin and Kalamazoo are in different regions, so they will not face off in the regular season.

Kayfus and Izarra are teammates and also housemates, as the Miami duo was assigned to the same host family. The two infielders were part of the same recruiting class and have become even closer now that they live together in Wisconsin.

“Having Jose with me made the host family experience a lot easier to adjust to,” Kayfus shared.

Izarra said, “With CJ here, I already have someone I know and it made me more comfortable being with a host family.”

Pitelli got lots of experience in his debut season at Miami, making 50 starts at shortstop for the Canes. But the infielder believes he can make a significant leap forward with his game this summer.

“I think summer ball helps you develop as a player a lot,” Pitelli said. “Playing with different guys from other schools and competing with each other to try and get better every day and win is a good thing. I hope to learn the game more, get stronger physically and learn how to stay composed.”

Kayfus, who earned a spot on the all-regional team after impressing in his NCAA tournament debut, is looking forward to experiencing new places this summer while improving his game before the 2022 season.

“Summer ball is mentally and physically draining because we play almost every day,” Kayfus said. “By learning to push through it, you will learn perseverance and that will make you better and tougher for the future.”

Izarra added, “Playing in places that I haven’t played before is exciting. I know this is a great opportunity for me because I didn’t get to play as much during our season at Miami. Getting a chance to play more is only going to help me get better and I also want to get stronger this summer and develop more skills.” 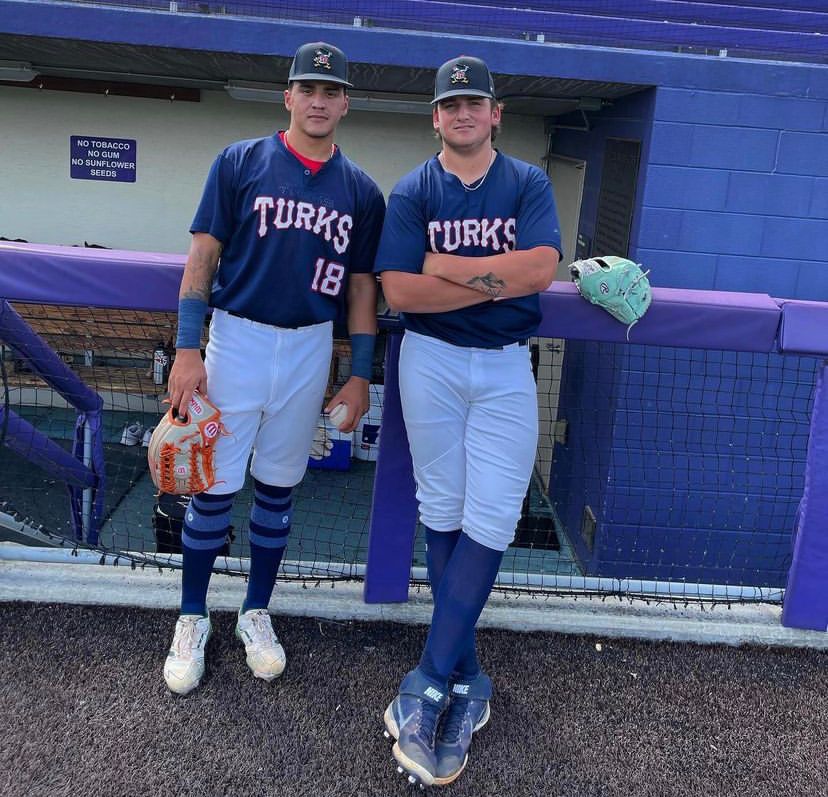 Five Canes are on Valley Baseball League rosters in Virginia, Pitchers Jamar Fairweather, Nicholas Regalado and Anthony Arguelles and outfielder Jacoby Long are all teammates on the Woodstock River Bandits.

“My Miami teammates make me feel a little more comfortable while adjusting to a new environment,” Fairweather said. “I know this is a great opportunity for me. It’s going to give me that game feeling that I didn’t get to experience much this year. It’s important to get that feeling of pitching in games when things matter most.”

Two-way player Mike Rosario is excelling for the Harrisonburg Turks. After missing most of the 2021 season due to injury, Rosario is leading the team with a .313 average and tallying three doubles, a triple two homers and eight RBI while striking out eight batters over 10 innings pitched.

“I am looking forward to going out there and playing the game again,” Rosario said. “After missing almost all of the spring season, I have to make up for the at-bats and innings that I missed.

“Missing this season due to injury wasn’t great, obviously, but it gave me a chance to understand myself and what I need to work on to prepare for the next season,” Rosario added. “Going to summer ball will give me a chance to develop those skills and translate them to the upcoming season.”

“I hope to show that I can do more than just relieve for one or two innings,” Bodanza said. “I want to show that I have the stuff to start and go deep into games.”

Miami’s final player in summer baseball action is closer Carson Palmquist. The lefty was named to the USA Baseball Collegiate National Team and he has two strikeouts over one scoreless inning of work.

“It means a lot to me and my family to be representing our country,” Palmquist said. “Watching baseball as a little kid, I always dreamed of playing for team USA. That’s always been a dream, and now that I finally get to do it I just hope that I can do well and make good out of it.”