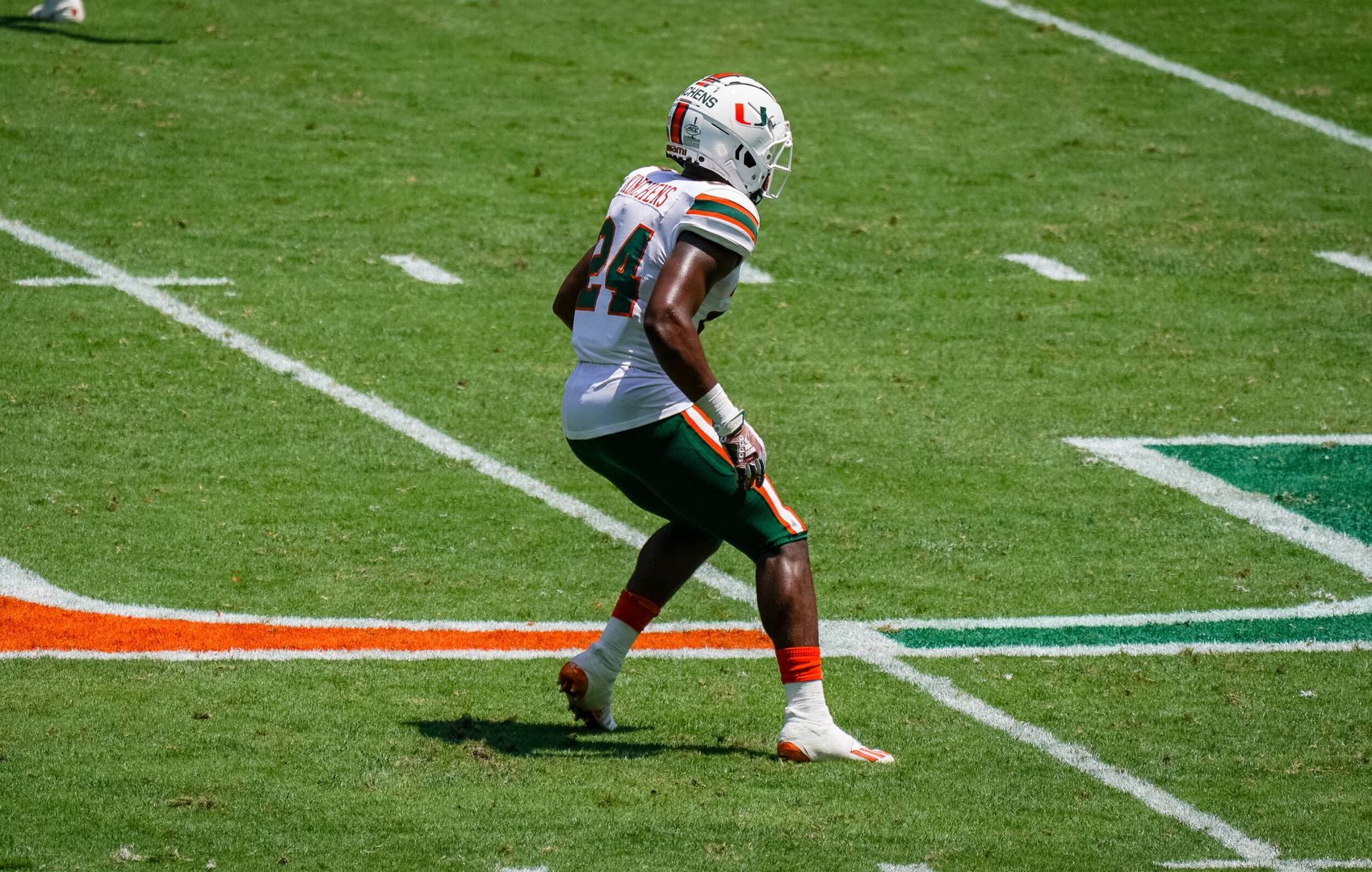 He was a four-star prospect coming out of Miami’s Northwestern High. A state champion three times over. And recruiting websites rated him as one of the top 15 safeties in the nation.

But even with the dazzling resume he’d put together while playing in a high school football hotbed, Kinchens was taken aback after his first practice as a Hurricane.

“We have these trackers on us that calculates your speed and things like that. We’re in a meeting with [defensive backs coach Travaris Robinson] and he put up everybody’s miles per hour and the distance they’d run throughout that whole practice,” Kinchens recalled with a wry laugh. “Everybody had about 2,000 yards and the lowest miles per hour was like 19.8. Mine was 14.2 and only like 1,000 yards running. I was like ‘Wow, I thought I was moving fast, but apparently not. I have to pick it up. I have to do extra stuff.’”

Turns out that’s exactly what Kinchens did throughout the rest of spring drills.

He capped his first few weeks on the practice field with a memorable performance in the Hurricanes’ spring game, where he notched five tackles and had an interception.

His knack for making plays and his football savvy earned him praise from teammates and coaches, including head coach Manny Diaz.

“His 15 days of spring practice were very impressive at a very hard position to play, going against our offense in the difficult tempo in which they go,” Diaz said. “It’s a lot to process mentally for a young safety. Kam did not look like a freshman or really a mid-year enrollee. He looked like an older guy. He’s got really good football instincts, really good movement skills, which helps in coverage and by the end of spring, he was actually playing multiple positions for us in our sub-defense because he could handle it mentally. I think he’s one of the guys that really made a big impression in spring ball.” 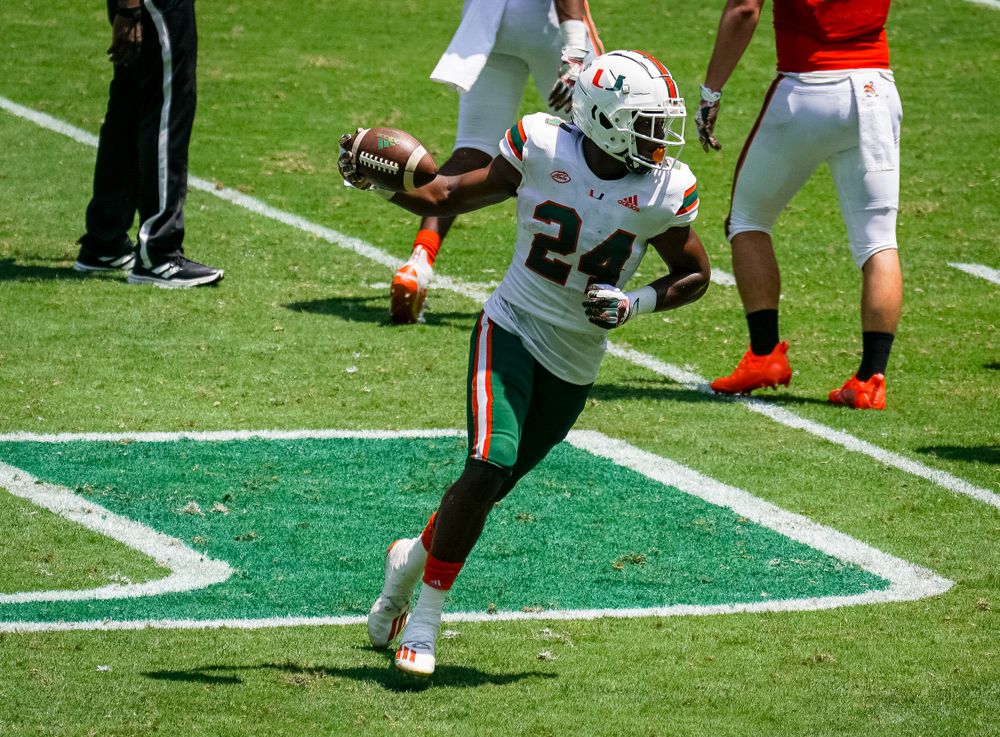 With his first spring behind him, the freshman says he’s ready to embrace the expectations that come with playing safety at the University of Miami.

“It means a lot to be here. Think of all the great safeties that have come out of this school. I want to be up there with them,” Kinchens said. “When they talk about safeties, I want to be in the conversation. That was my same mindset at Miami Northwestern…At the end of my high school career, I wanted to be known as one of the best DBs and one of the best players to come out of my high school. That’s my same goal here. I want to be in the same conversation as Sean Taylor, Ed Reed and guys like that.”

For Kinchens, the desire to excel at his hometown program extends beyond just wanting to make an impression on the football field.

He’s hoping his time as a Hurricane inspires his community. His mother, Merdie Kinchens, believes that will start at home, where Kinchens will still be able to be a regular presence for his five younger siblings.

Already, his entire family is excited about the opportunity to see Kinchens take the field at Hard Rock Stadium in orange and green.

“I’m ecstatic for him. Sometimes as parents, you think about your child going off to see other places, but at the same time, him being home is so amazing,” Merdie Kinchens said. “I know the coaches and the staff at the University of Miami are always going to make sure Kamren has everything he needs. They’re always making sure they’re speaking to him, encouraging him, straightening him out when he’s wrong. That’s a great thing. And his siblings, he’s the oldest of six so to be able to see them, to partake in the activities that they have going on, that he’s able to support him in what they’re doing, it’s meant so much to them. On his off days, he comes and works out with them and when he’s able to, he comes to their games and encourages them. When they see him supporting them even though he has his own thing going on, that means so much to him.” 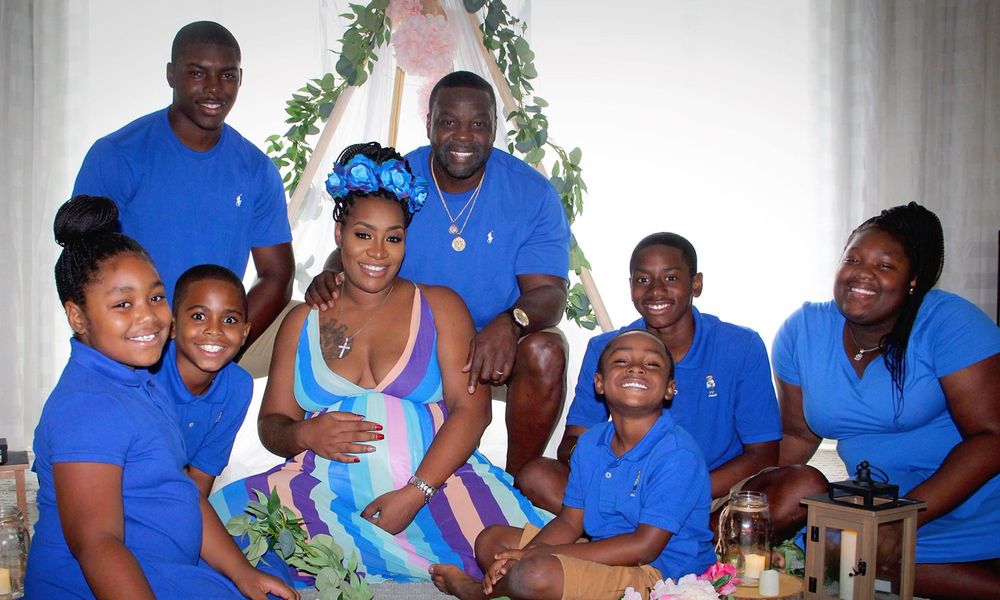 Kamren Kinchens with his family, including his stepfather Frankie, his mother Merdie, his brothers Demetrius, Donta and Karter, his sister Kai and his stepsister Sariah.

Kinchens, a Miami native who grew up cheering for the Hurricanes his entire life, knows full well the importance of mentorship and helping younger athletes who hope to follow in his footsteps.

Before enrolling at Miami in January, he was already getting tips on football, college and life in general from former Hurricanes safety Kenny Phillips, who served as a mentor to him throughout high school.

The two met through Kinchens’ former defensive coordinator and the advice he says Phillips has given him will only help him in the long run.

“I feel like it was a great opportunity to get to know him because no matter if you only play high school or middle school [football], or even if you get into the pros, whatever information someone gives me, I’m going to take it and run with it,” Kinchens said. “I’m going to use it every time and with Kenny, like I said, he knows what he’s talking about because he was in the pros.”

And while he dreams of playing professionally one day himself, for now, Kinchens is determined to make the most of his opportunities at Miami – on and off the field.

“I want to win the Jim Thorpe Award because that award hasn’t come to Miami in a long time. I want to bring UM two national championships, at least. And I want to make sure all the coaches are good, because they’re great coaches,” Kinchens said of his goals as a Hurricane. “I want to be one of the top guys in community service, too because I love giving back. I want to leave with a degree and I want to try and leave with a master’s. That’s my plan.”