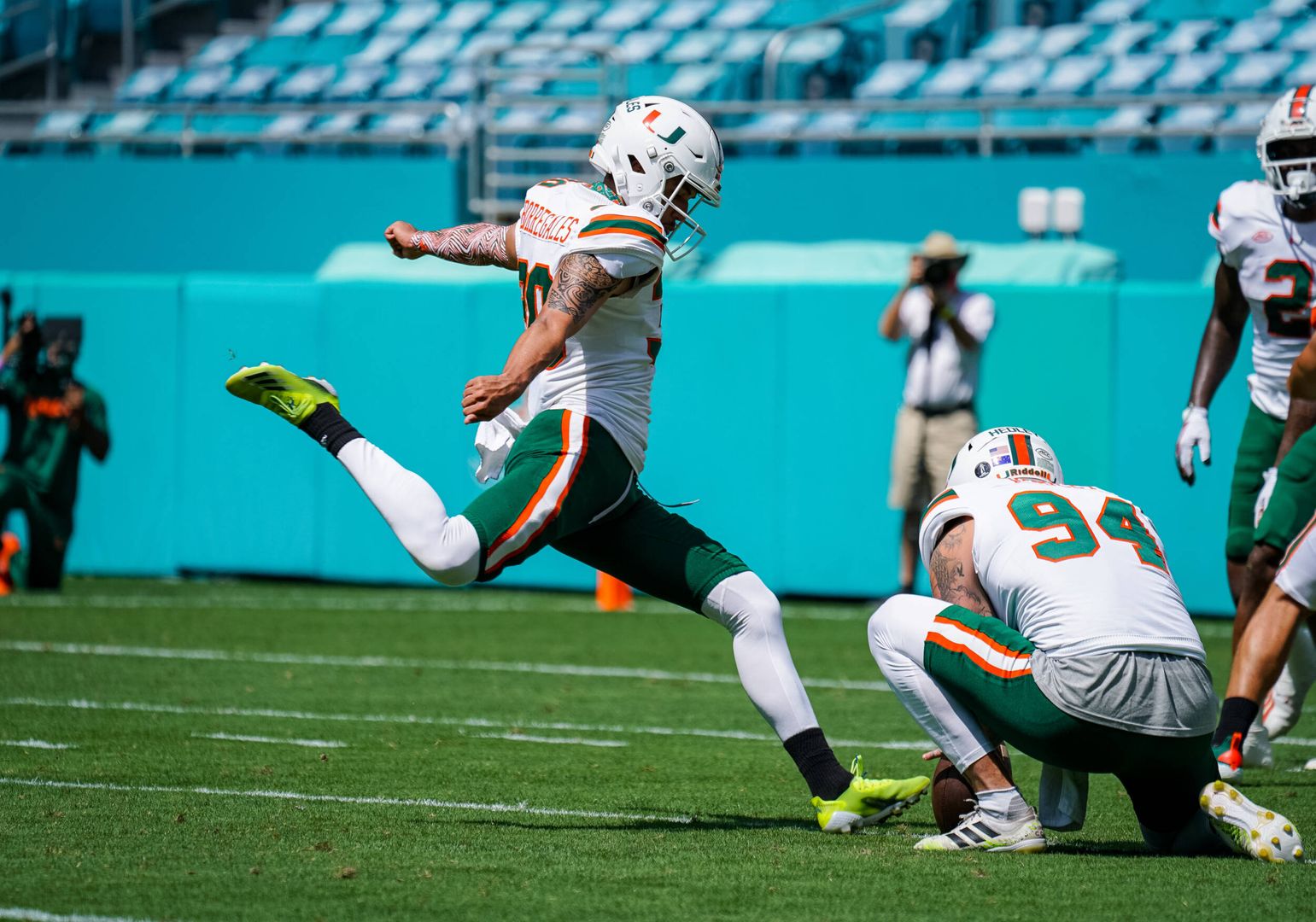 Ready to Write His Own Story

CORAL GABLES, Fla. – It was, for all of them, an incredibly special family moment.

His parents and his sister couldn’t hold back the tears. His brother couldn’t stop smiling.

And though he too felt the weight of it all, Andy Borregales couldn’t help but crack a joke as he and his family gazed up at the new banner hanging in the rafters of the Carol Soffer Indoor Practice facility commemorating his brother’s All-American season.

“I remember joking around like ‘I think you have to flip it around so there can be a space right next to his name and I can put mine up there, too,” Andy Borregales laughed. “We definitely talked about it. That day was really emotional for my brother and for all of us. He came in here and did all of that in one year…imagine if he would have come here as a freshman. Everything he did in one year, just multiply that times 10 and that’s what we would have done. I’m pretty sure we all cried tears of joy that day.”

Despite the occasional bit of good-natured brotherly ribbing – like the wise cracks exchanged on that memorable January day – Andy and Jose Borregales are each other’s biggest fans. And for each of them, the last 18 months have been the stuff of dreams. 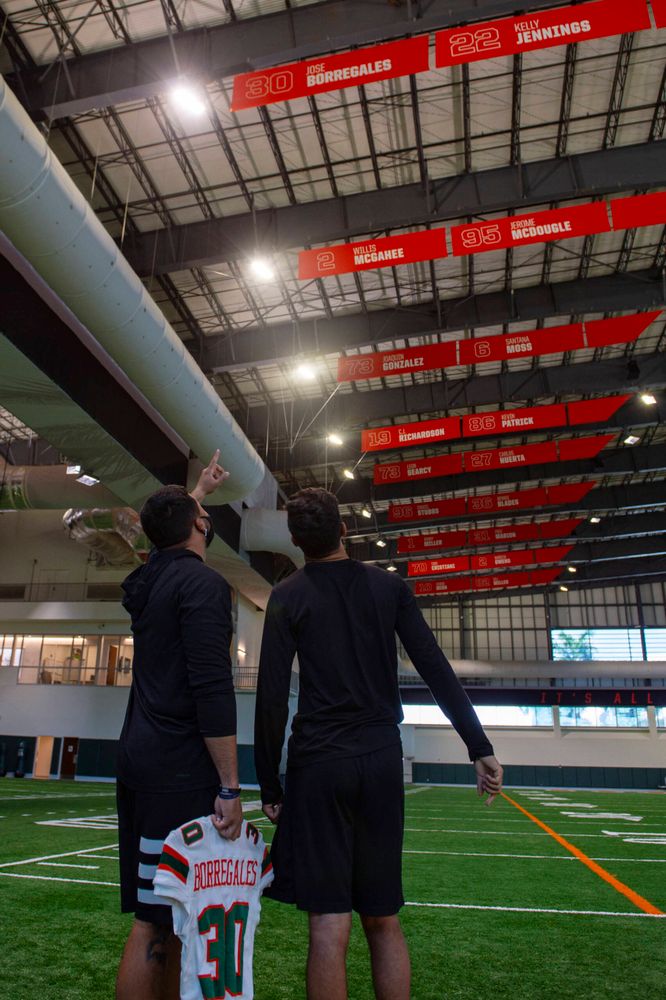 Jose Borregales, the former kicker at FIU, transferred to Miami ahead of the 2020 season and went on to become the first Hurricane to win the Lou Groza Award, which is presented annually to the nation’s top collegiate kicker.

He tied a Miami record when he booted a 57-yard field goal against Louisville. He went on to finish the season as the Hurricanes’ leading scorer, was named a first-team All-ACC selection and was recognized as a first-team All-American by the American Football Coaches Association, the Associated Press, the Football Writers Association of America, the Sporting News and the Walter Camp Football Foundation.

And Andy – a kicker himself – celebrated every milestone and honor with him.

Now, with Jose Borregales in Tampa Bay bidding to earn a spot on the Buccaneers’ roster, Andy has arrived in Coral Gables eager to make a name for himself. 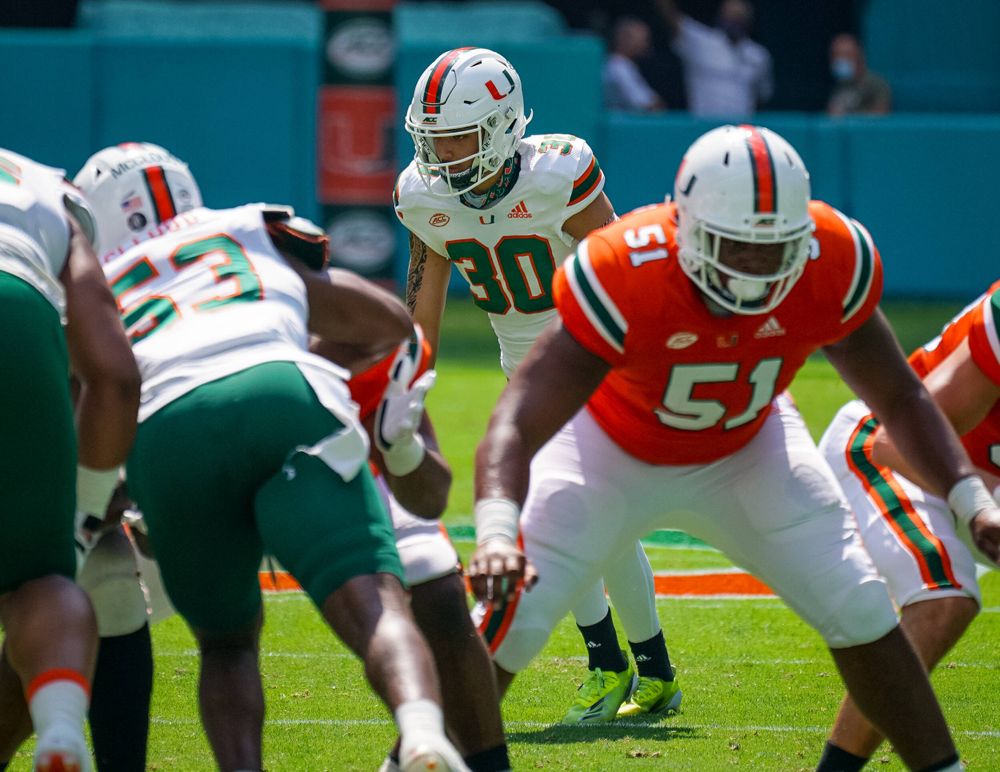 A lifelong Hurricanes fan, he knew before the start of his junior year of high school he wanted to kick at Miami. He became one of the first members of the Hurricanes’ 2021 recruiting class and though other schools tried to add him to their rosters, he held firm.

In January, he enrolled at Miami, dove into offseason workouts and began the process of adjusting to college life, something he admits came with a few challenges, especially when it came to learning how to manage his time efficiently.

But with guidance from his family and his coaches, he navigated those. And by mid-March, he was on Greentree for his first official practice as a Hurricane – wearing the same number his brother had worn just months earlier.

“Oh, I was nervous. It felt like a huge pressure on me. But it was a good type of pressure since, again, it was my dream to put on that uniform, even the practice uniform,” Borregales said. “Just putting that helmet on, that’s when it really kicked in that I had made it to UM and it wasn’t a dream anymore. It was actually reality.”

Though most of his new coaches and teammates already knew him – either through the recruiting process or because of his brother – it didn’t take long for Borregales to make an impression.

In each of Miami’s spring scrimmages, the freshman showed a knack for making kicks in high-pressure situations. He converted on two attempts in his first scrimmage, including a 42-yarder that came on the session’s final play.

He didn’t miss on any of his first attempts at Hard Rock Stadium either, connecting on three attempts in Miami’s second spring scrimmage, including a 52-yarder right before halftime.

A week later in the Hurricanes’ spring game – and with his parents and Jose watching from the stands – Borregales connected on three more field goals, including yet another kick as the clock expired.

Not bad for a football player who tried out a variety of positions including running back, safety, corner, wide receiver and even quarterback before he settled on kicking in high school.

“I think he earned the respect of the locker room this spring because of the kicks that he made,” Hurricanes head coach Manny Diaz said. “Midway through the spring, we kind of put him on the spot and he had to make a long kick and everyone on the team was going to benefit if it went in and not benefit if it didn’t go in. He missed and we were like ‘Okay there it is.’

“The next day was our first scrimmage at Hard Rock and he went out there and banged his first field goal in. We had a one-minute drill before halftime and he had to kick a 52-yarder with five seconds left. He blasted it right through the uprights. He didn’t miss a field goal the two times we were in Hard Rock this spring…At that position, it’s how do you respond if you don’t make one. Does that affect you on the one after? And he showed great resiliency and great mental toughness that I think caught everybody’s attention.” 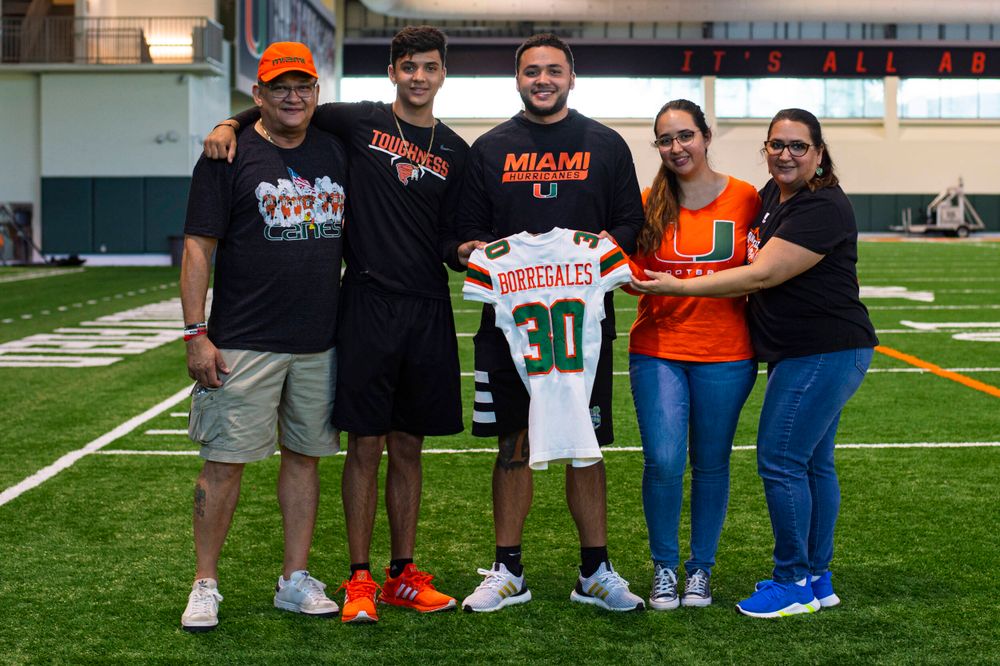 That resiliency, Borregales knows, will be crucial as he continues preparing for his first season of college football.

Since arriving at Miami, he’s worked to add muscle to his 5-11, 170-pound frame. He’s spent time building bonds with his fellow specialists, noting that’s been an easy transition because of his brother’s ties to the group.

He’s determined to do his part to make both his family and his hometown proud as he forges his own path as a Hurricane.

And he can’t help but laugh, again, when he thinks about how he can best write his own story at Miami.

“Honestly, I’ll do that by just doing better than my brother,” he chuckled. “My goal when I get out of here is to just have a good impact on the community and also just get my name on that banner right next to his. That’s my next dream…Right now, it means everything to me to be a kicker at Miami. It’s my career path, my life. Just saying I’m a kicker for the Miami Hurricanes is a dream of mine.”