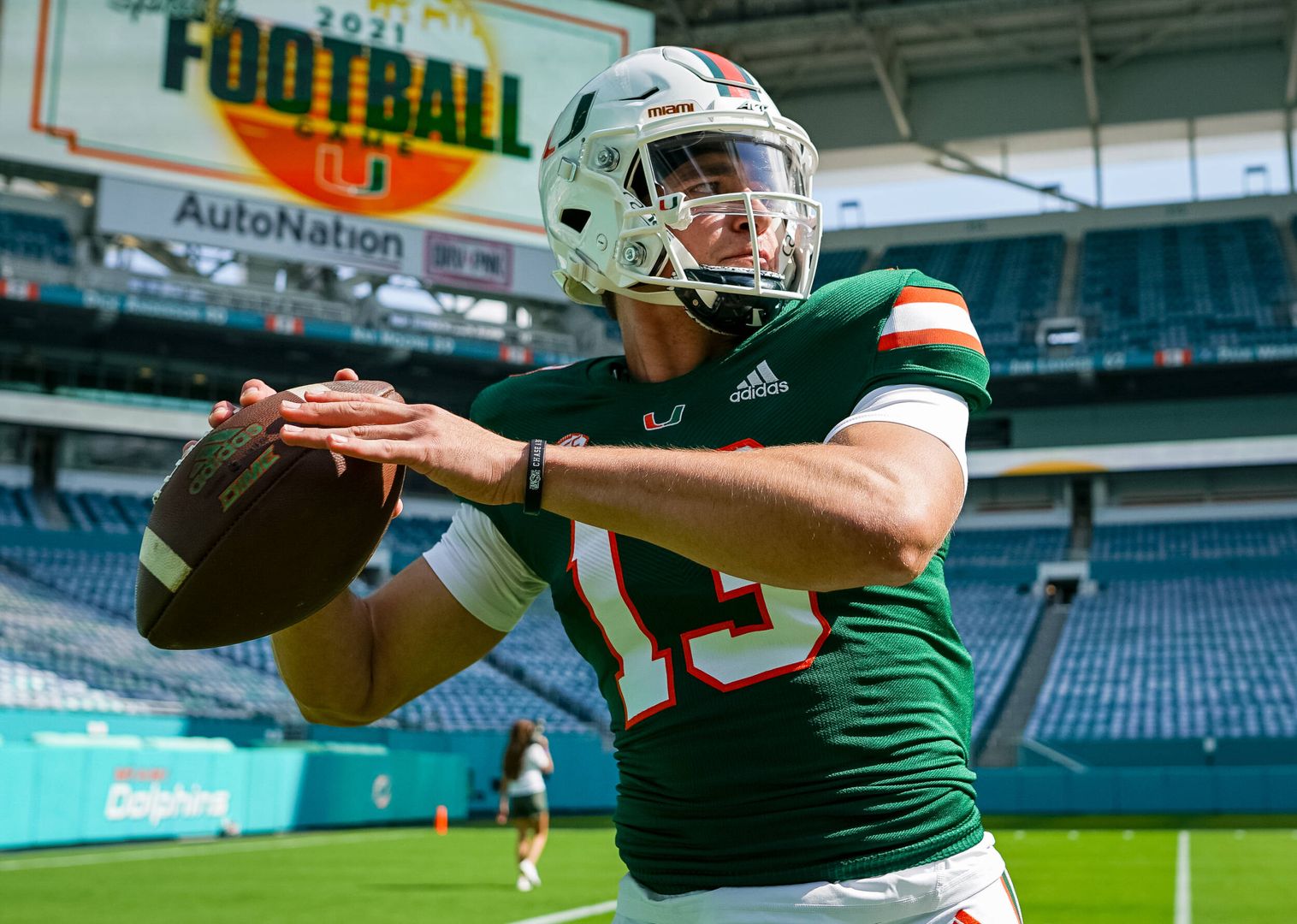 Learning on the Fly

CORAL GABLES, Fla. – In so many ways, the past few months have been all about adjusting.

Getting used to waking up on his own before the sun rises to make sure he isn’t late for workouts. Adapting to weather that is sunny and warm one minute, soggy and steamy the next. Meeting new teammates and coaches. Taking college-level classes. Getting to know a new city.

Then there’s the one part of life in Miami that Jake Garcia wasn’t expecting: the wildlife.

“I name all the animals on campus. I always see them in the same place. There’s a lizard that looks crazy. He’s got orange and red on his head and orange and red on his tail and he’s always on the rocks by the lake,” the quarterback laughed. “I see him every day. And if I see them every day, I’m going to name him. So, that’s Shiloh…We don’t have iguanas in California, so I go over there and just look at the iguanas. They’re interesting.”

But between all the changes and South Florida’s unique climate and critters, one of the constants for Garcia since his arrival in Coral Gables in January has been one of the big things that brought him here: football.

That’s been an adjustment too, of course. Learning new concepts, studying a new offense, building chemistry with a new set of playmakers. Still, that’s been a process Garcia says he was ready to handle, especially given all he and his family endured the past 12 months. 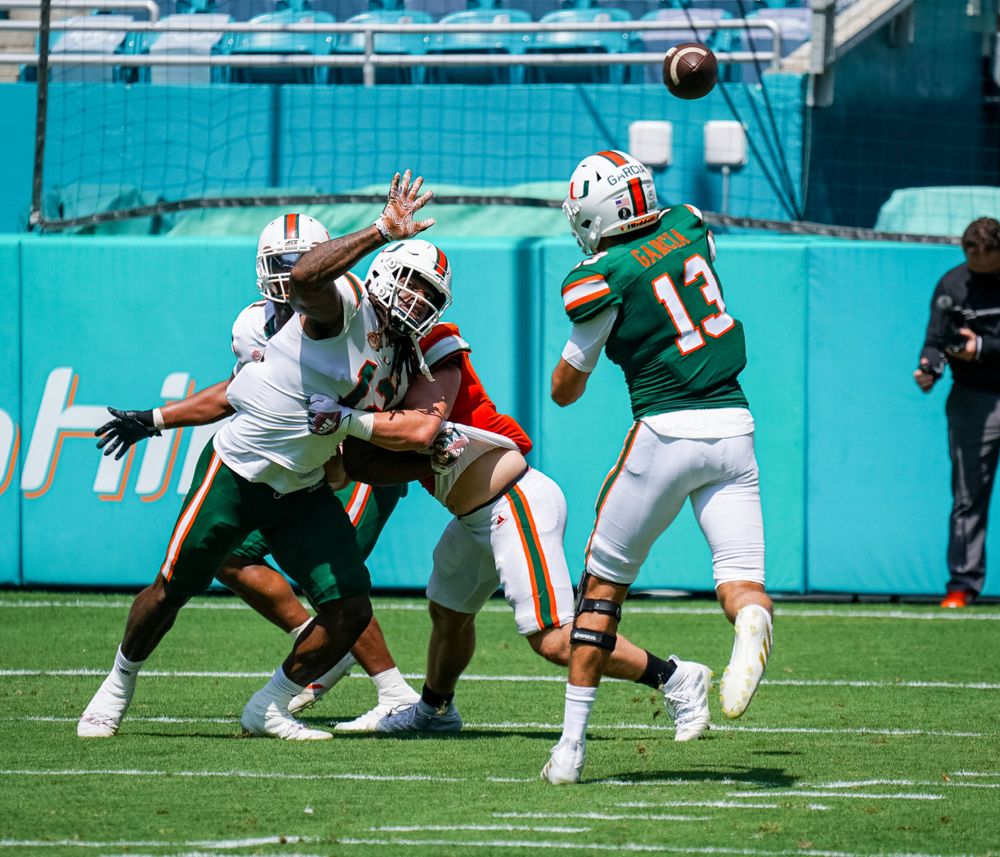 When high school sports in California were halted last summer because of the COVID-19 pandemic, Garcia and his father, Randy – a former quarterback at Nebraska and the man who introduced Garcia to the game – moved to Georgia so the quarterback could have a senior season.

Meanwhile, Garcia’s mother, Yvonne, stayed in California. For months, the family was separated and Garcia was suddenly thrown into a whole new environment.

“That was my first time leaving home. I’d lived in the same house for 18 years and I had to move and leave all my friends. That was definitely a tough experience,” Garcia said. “But it was something I knew was really going to help me in the long run. And it has. There are things I worked on with my quarterback coach Danny Hernandez during the pandemic and I applied that during the season and I’ve been able to carry that over here. It helped during spring ball. Just being able to pick up coverages, getting little pre-snap ideas of what’s going to happen…it’s all helped me. And I had support from everybody. That really helped a lot, too.”

Despite the challenges, Garcia solidified himself as one of the nation’s top quarterback prospects during his time at Georgia’s Grayson High.

He was named an Under Armour All-American, led the Rams to a state championship and finished his four-year varsity career throwing for nearly 6,000 yards with more than 50 touchdowns.

During his time there, the quarterback made another life-changing decision.

Instead of returning home to California to play college football – as he originally expected he would – Garcia chose to head even further south.

He signed with the Hurricanes during the Early Signing Period in December, ending a months-long recruiting effort from not only Miami’s coaches, but from more than a few of his fellow top-notch prospects who’d hoped to bring the quarterback to Coral Gables with them.

Garcia enrolled at Miami in January and by the time he walked into his first team meeting, another unforeseen situation presented itself.

With veteran quarterback D’Eriq King sidelined after tearing his ACL in Miami’s bowl game, the Hurricanes’ young signal callers – Garcia included – were now tasked with running the offense through the entirety of the spring.

There was no time to really ease his way into major college football. Garcia had to dive in. Fast.

While recovering from a foot injury of his own, the quarterback studied Miami’s playbook. He worked to get to know his new teammates, particularly his receivers. And he embraced the work he could do during those early-morning workouts with David Feeley, Miami’s director of strength and conditioning.

Garcia’s first on-field test eventually came during the Hurricanes’ first scrimmage of the spring and the quarterback more than delivered, completing 15 of 19 passes for 188 yards and a touchdown. Weeks later, Garcia had another solid showing in Miami’s spring game, completing 18 of 26 passes for 253 yards with two touchdowns.

Teammates and coaches, of course, noticed his progress.

“You learn at a little bit of a slower pace in the spring. You don’t practice on back-to-back days. You have a couple months where you can work on your installs before you get into the spring and then with the unique situation of D’Eriq being out, there were just a lot of reps there for Jake,” Hurricanes head coach Manny Diaz said. “It was massive. Timing, a lot of times, is everything. So to see Jake come in and compete with Tyler [Van Dyke] and Peyton [Matocha]…it was the right time and he took advantage of it. That’s really want you want to see all your guys do when they come into the program.”

With his first spring behind him, Garcia is now looking forward.

He knows more competition awaits. And he’s preparing for it as best he can. But he’s also taking the time to enjoy a little bit of routine after a year that was anything but.

"It holds weight when you’re a quarterback at the University of Miami..."

His family is now reunited here in South Florida and he’s been able to spend plenty of time with both of his parents. He’s forged bonds with not only the members of his recruiting class, but many of his older teammates. And he’s made it a point to connect with Miami fans that recognize him when he’s out and about, particularly the children who ask for pictures or words of advice.

“I remember being that age, going to high school football games and looking at those high school boys like they were the best to ever play,” Garcia said. “If they talked to me, I remember the impact they had on me. I’d like to give that same feeling to other people and other young kids. The impact you can have on kids coming up is long-lasting. They could end up being future Hurricanes because of that. You want them to carry on that legacy.”

For Garcia, that’s part of the responsibility that comes with playing his position at a school that’s been recognized as “Quarterback U” and has produced the likes of Jim Kelly, Bernie Kosar, Gino Torretta, Steve Walsh, Ken Dorsey, Craig Erickson and Brad Kaaya, among others.

And while his journey at Miami is just beginning, Garcia is already hoping to leave the same kind of mark at Miami that so many of his predecessors did.