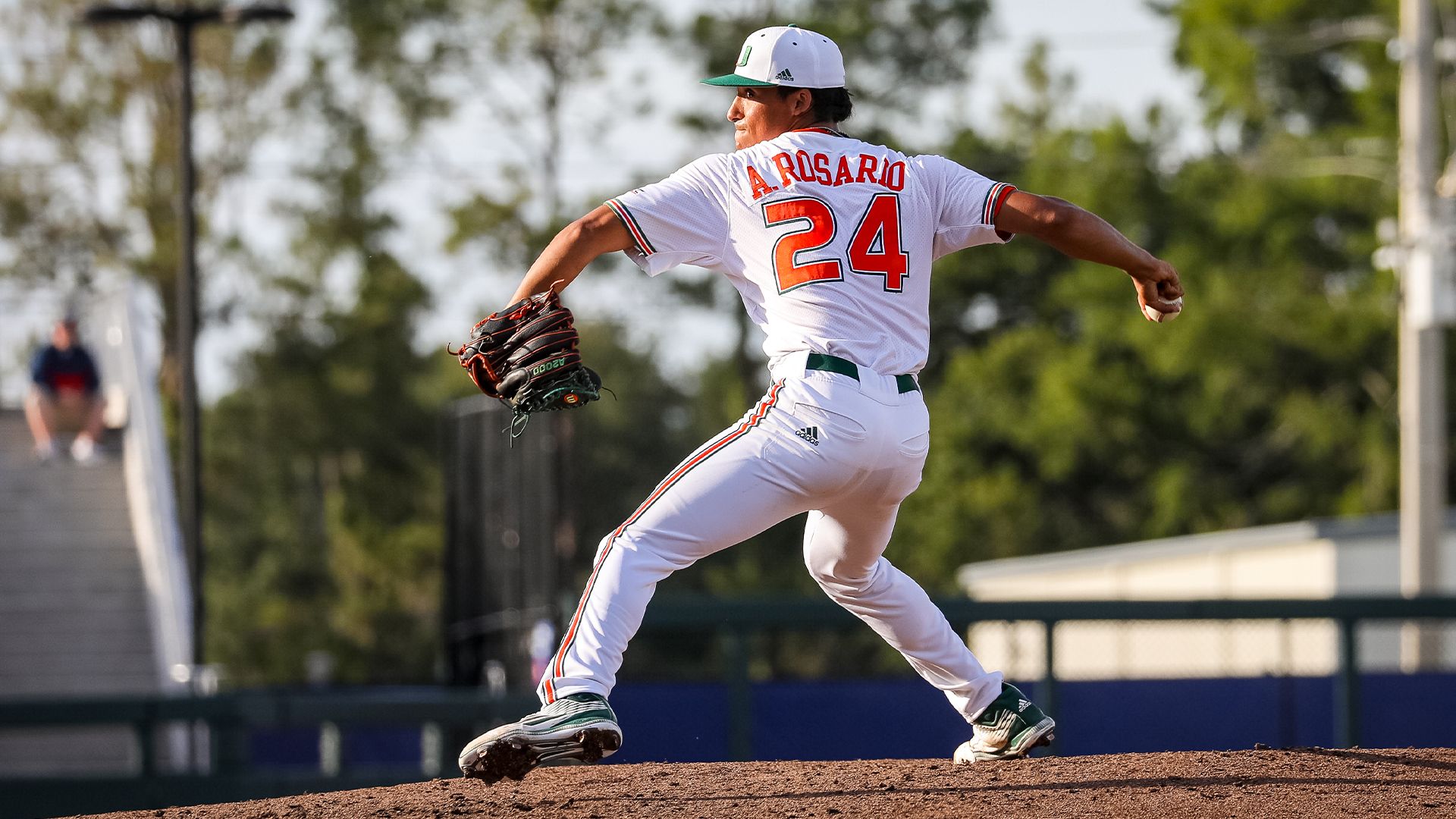 GAINESVILLE, Fla. – Sometimes it only takes a run to come away with a win and Miami freshman Alejandro Rosario made sure that was all the offense the Hurricanes would need in their first game at the Gainesville Regional.

“I just took it as business as usual,” Rosario said. “The team was always there, always had my back and I always have their back and I just went out there and did my job.”

“You’ve got to take care of game one and our guys did a good job of focusing,” head coach Gino DiMare said. “Obviously, coming here to the regional, your concern as a coach is looking ahead to Florida, possibly having that matchup. I told our guys, there’s going to be upsets in regionals. There’s not going to be 16 number one seeds moving on to the Super Regionals. It just doesn’t happen that way.”

Rosario was impressive in his NCAA postseason debut. The right-hander scattered four hits over 6.1 shutout innings while striking out five Jaguars. Rosario is the first Miami starting pitcher to throw six innings since Jake Garland on April 25 at North Carolina, snapping a streak of 16 games. 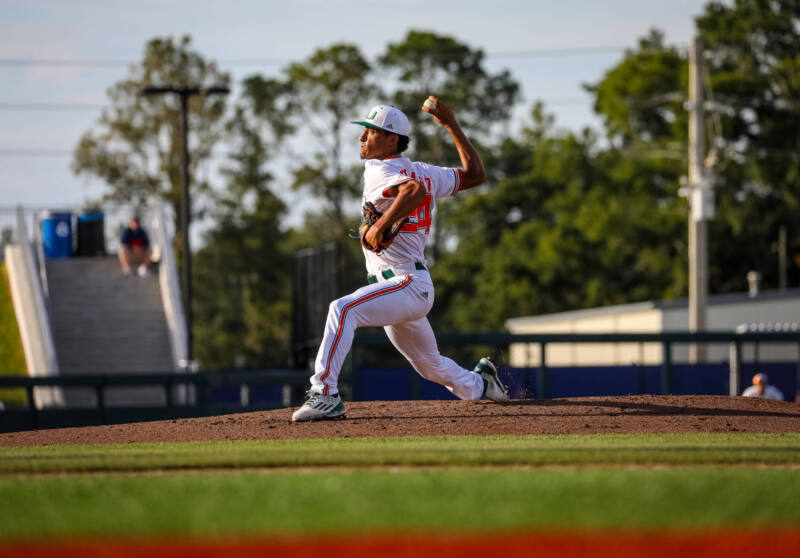 “He was awesome,” catcher Adrian Del Castillo said of Rosario. “Every time he comes out, he’s bringing that fire. I think his changeup progressed as the game got later. He definitely started using that changeup, which those batters were probably not thinking of in the back of their heads because they probably saw it at the beginning and it wasn’t a strike most of the time, but he was getting it for a strike probably the second or third at-bat.”

Miami’s offense got on the scoreboard in the fifth, loading the bases before Adrian Del Castillo hit a sacrifice fly to deep center that pushed home Dominic Pitelli to make it 1-0.

After giving up a one-out infield single in the top of the seventh, Rosario was replaced on the mound by Daniel Federman. The veteran right-hander got two quick outs to end the seventh and protect the Hurricanes lead.

“It was a coaches decision,” Rosario said of being lifted after 90 pitches. “I trust them. They trust me. I trust my teammates. I trust the guys that come in behind me, especially Fed. Just the whole bullpen, I knew he was going to get the job done – whoever came in behind me.” 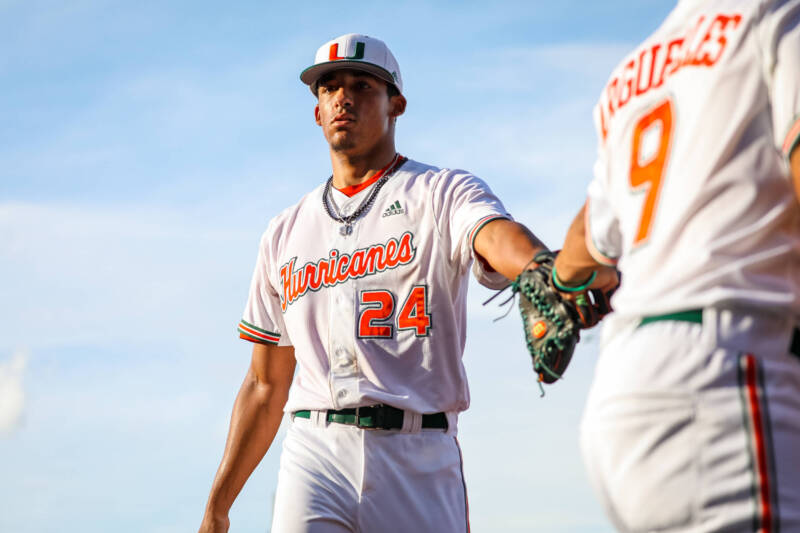 Closer Carson Palmquist took the mound in the top of the eighth and did not allow a hit over two scoreless frames to pick up his 14th save of the year and close out Miami’s fifth shutout of the 2021 season.

“The first game in these regionals is so important,” DiMare said. “Obviously, getting that first one and then of course the second one is the real big one, because that puts you in the driver’s seat; puts you in the championship game if you can win game two. You win the first two games, you’re in the championship game and somebody’s got to beat you twice. You’ll play no more than four at the most. But, we have to make sure we take care of business tomorrow.”

The Hurricanes will face USF in the winner’s bracket game on Saturday. First pitch is scheduled for 4 p.m. 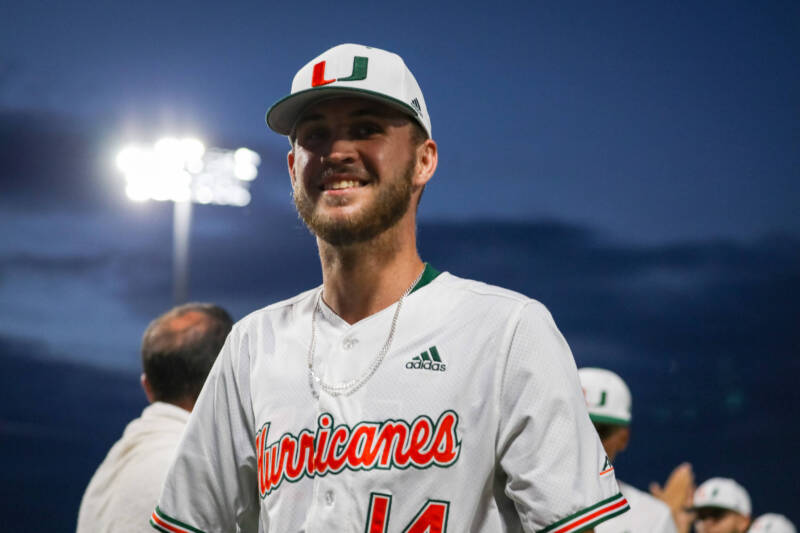