CLEVELAND, Ohio — From players to trainers to coaches and reporters, the sports industry has a long history of being dominated by men. But Vikaya Powell is out to change that.

The University of Miami graduate student just started an internship with the Cleveland Browns football team—and she is the first woman to work for their equipment staff since the team was founded in 1946.

Sports have been in Powell’s life for as long as she can remember. Throughout her childhood, she participated in everything from dance and cheerleading to basketball, track, and flag football.

Even so, when she started her undergraduate career at Winston-Salem State University (WSSU) in North Carolina, she was interested in social work. But inspired by “Just Wright,” a movie about a female athletic trainer and an injured NBA star, she jumped into the athletic training program. It was only after discovering her aversion to anatomy classes that she narrowed her focus to what would become her true passion—sports equipment management.

While earning her bachelor’s degree, she worked for WSSU’s football team on their equipment staff. The job often consisted of 12-hour days and involved everything from setting up drills for practices to managing team uniforms and making quick fixes on the sidelines of games. But Powell could not get enough.

“I fell in love with the chaotic environment. It’s never going to be a peaceful day in equipment—you’re dealing with 100+ athletes,” Powell said. “I didn’t want to work behind a desk. I love moving around and being on my feet.”

After graduating in 2019, Powell was hired at North Carolina A&T State University as an assistant equipment manager for their football team. There, the equipment manager was a woman. Powell said she was even more inspired to pursue a career in the industry. 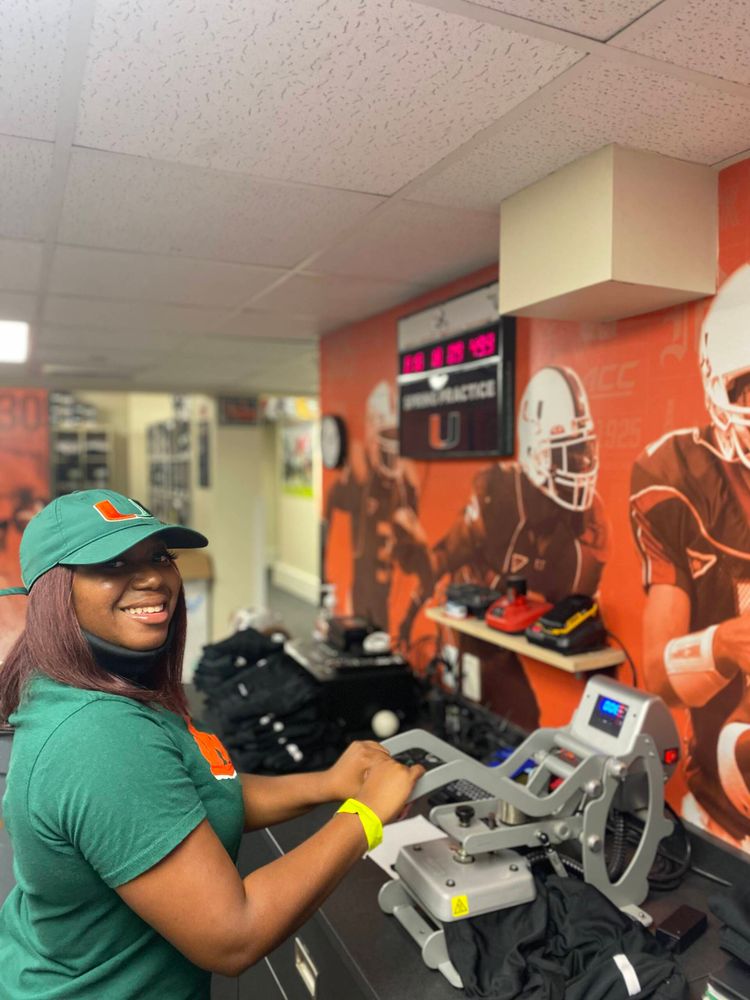 “I want to be the first female head equipment manager in the NFL,” said Powell. Self-advocating and chasing goals is something she said she learned during her time as a Hurricane. She began a 12-month master’s degree program in sport administration in August of 2020, enrolling full-time in the School of Education and Human Development.

“One thing I learned from UM is knowing what I bring to the table, negotiating and getting what you deserve as a female in the sports industry,” she said, highlighting assistant professor Claire Zovko’s Legal Aspects in Sport class. “I never take no for an answer.”

At the same time, she joined the Miami Hurricanes football equipment staff as a student manager. “It’s the University of Miami. I mean, come on,” Powell said. “It was a great experience to be at a top-notch school.”

Sam Nichols, associate director of equipment operations for the Hurricanes football team, spoke of the mark Powell left on his staff.

She came in every day with a smile on her face. I never saw Vikaya have a bad day, and she was always wanting to learn more. There’s no doubt she had a positive impact on everyone she interacted with here, and I know she’s going to do the same in Cleveland.

When Powell was told she had landed the internship and would be the first-ever woman on the Browns’ equipment staff, she said she cried.

“This is the first step in the direction I’m trying to take. This is exactly what I’m here for,” she exclaimed.

Powell began her internship in Cleveland on May 1 and will be with the Browns for the duration of their upcoming season.

Powell has some advice for other women who dream of a career in the sports industry: Go for it.

“Who’s going to chase it and who’s going to wait for it to come to them? That’s what makes the difference,” she said. “Apply to things you don’t think you’ll get. There’s going to be obstacles. Jump over them.”