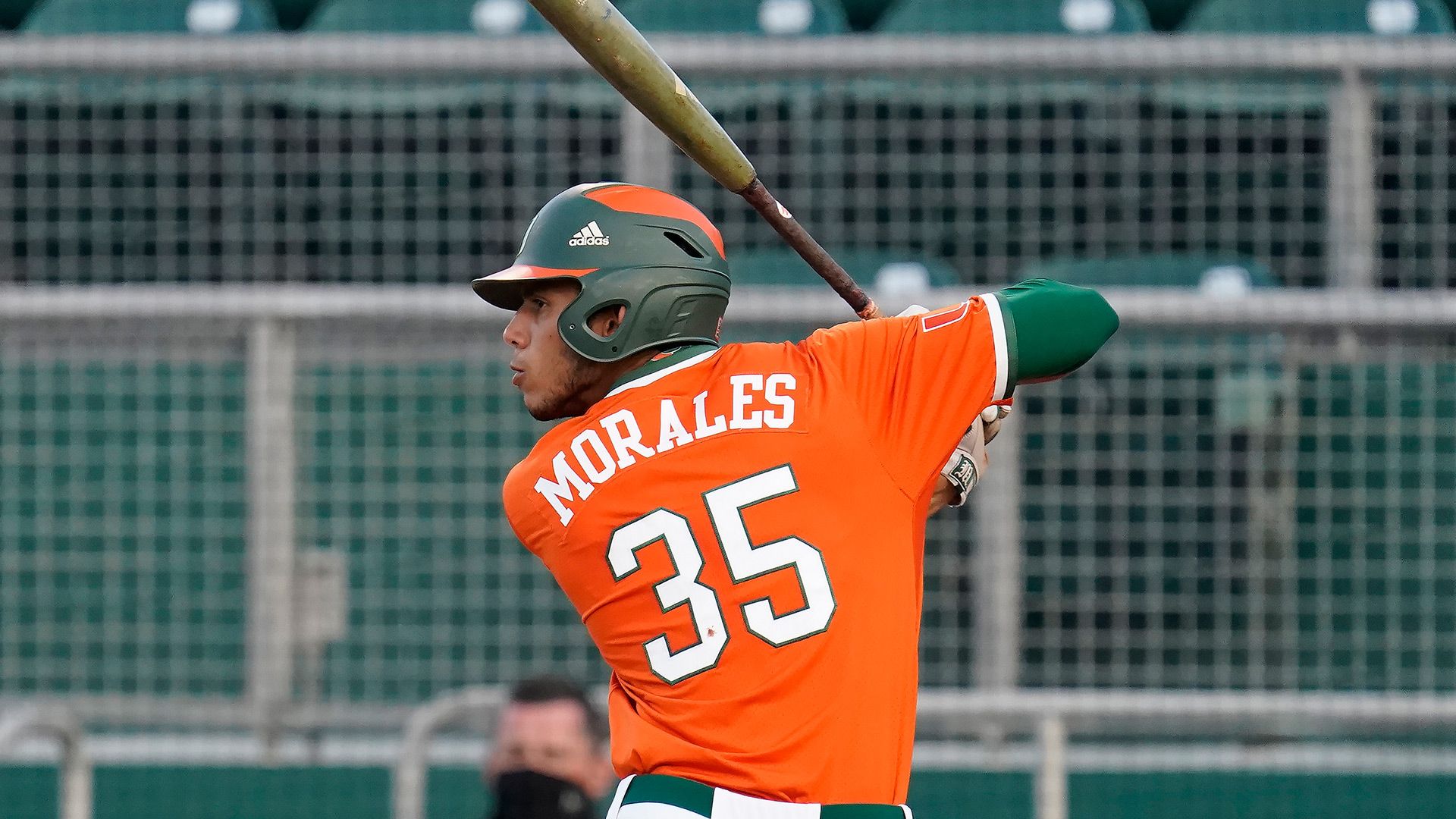 Canes Shut Out No. 19 Louisville

LOUISVILLE, Ky. – Miami’s offense struggled on Friday night, but the Hurricanes’ pitching staff tossed its third shutout of the season to secure a series victory at No. 19 Louisville.

“It starts with the starter and Jake [Smith] did an unbelievable job,” head coach Gino DiMare said. “He threw 65 pitches and we haven’t quite extended him. I’d like to extend our starters but he’s just not quite ready there yet. But, the strength of our team, a lot of it has been those back-end bullpen guys and they stepped up tonight and helped us get in position to go for the sweep tomorrow.”

After three perfect innings to start his outing, Miami starter Jake Smith got into some trouble in the fourth as Louisville opened the inning with a base hit and a walk. But the first-year Hurricane pitched out of the jam, making two defensive plays before striking out Trey Leonard to end the inning and maintain the two-run advantage.

Spencer Bodanza followed Smith on the mound and tossed 1.1 shutout innings before turning the ball over to Andrew Walters to start the seventh inning. The rookie right-hander threw 1.1 scoreless frames and handed the ball to closer Carson Palmquist.

“Jake did a great job and maybe he was starting to lose a little bit of command there, and the timing of it was right because of where they were in the lineup,” DiMare said. “It was the right time for Spencer to come in, kind of the way we did it yesterday in that certain time in the lineup, and he came in and threw an inning and a third for us today. That was huge and then Walt came in fresh and the ball was jumping out of his hand for an inning and a third. Great job by him and then we went to Carson up two runs there late in the game and we were going for the W. If we’ve got a chance to win, we’re going to go with him.”

Miami’s lefty closer shut the door on his 13th save of the season. Palmquist is now one save shy of tying George Huguet (2001) and Robbie Morrison (1996) for 10th place in UM history with 14 saves in a single season.

“He’s the most unique ones that I’ve seen,” DiMare said. “We’ve had some really, really good ones. I just have never seen one that can be so dominant. It’s a funky delivery that it’s not something that hitters see a lot of, and you get some very, very awkward swings and takes. It’s very dominating.”

Miami’s offense did not produce a ton of runs, but Morales’s second-inning blast gave the pitchers a lead they would not relinquish. Christian Del Castillo led off the frame with a base hit to right and Morales followed with a two-run homer deep to center. The true freshman demolished the first pitch he saw from Louisville starter Jared Poland, as the ball traveled 436 feet with a 105 miles-per-hour exit velocity before hitting off the batter’s eye to give the Canes a 2-0 lead.

“We had a lot of opportunities to score more runs,” DiMare said. “I told the guys we were fortunate tonight. We had a lot of opportunities to score runs, and we just didn’t take advantage of them. We had guys in scoring position, guys on base, leadoff guys on, and we did a poor job of executing situational baseball. We’ve got to do a better job of that. But I’m very happy with the series win and now we got to try to go for the sweep.”