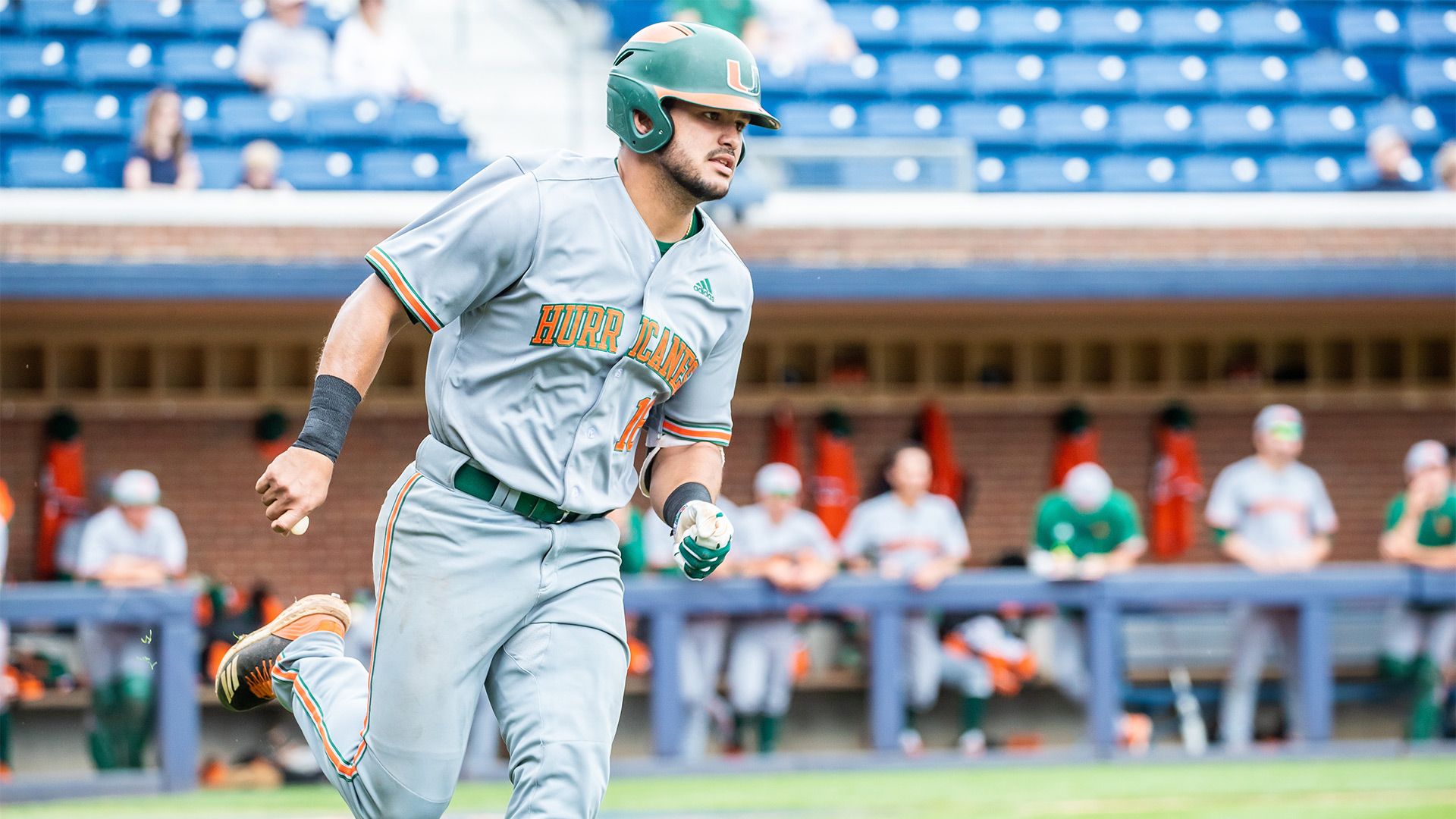 Gil Powers Canes Past No. 19 Louisville

LOUISVILLE, Ky. – Raymond Gil has always had a knack for success in key moments and the four-year starter stepped up in a huge way on Thursday in Louisville.

“All year we’ve kind of put ourselves behind the 8-ball starting up on Fridays and giving up those games,” Gil said. “It’s good just to get game one, because now you build off that and you try to get game two and then you go for the sweep so it’s definitely huge. It’s a momentum thing for us and it gives us confidence.”

Gil, who had the game-winning hit in the second game of the season at No. 1 Florida, added another game-winning blast to his resume in the top of the seventh Thursday night at Jim Patterson Stadium. Miami’s designated hitter crushed a leadoff homer that traveled 431 feet with a 106 miles-per-hour exit velocity before hitting the batter’s eye in center field.

“I think I just do a good job of staying relaxed, staying to myself and not trying to get too big,” Gil said. “It’s a big moment and you don’t want to try to get big for that moment. You’re just trying to stay within yourself, stick to your game plan and put a good swing on the ball.”

Jordan Lala followed with a triple off the wall in right and scored when the third-year player stole home, doubling Miami’s lead to two runs, 3-1.

Gil added his second homer of the night an inning later, depositing a two-run homer over the wall in left field to make it 5-1. The blast gave Gil his fourth two-homer game of his career and the second this season, as he hit two home runs at Pitt on April 9.

Anthony Vilar capped a three-hit night with a two-out solo homer to right in the top of the ninth. The second baseman joined Gil as Hurricanes with three hits on Thursday.

Louisville (27-19, 16-14 ACC) scored first, getting a run across with two outs on a wild pitch by Alejandro Rosario that allowed Trey Leonard to come home and give the Cardinals a 1-0 lead. But that’s all the Cardinals could muster against the true freshman, as Rosario scattered two hits over 4.2 innings while striking out four.

“Alejandro, great start from him to go as far as he did because he hasn’t pitched that kind of length lately, and to be able to do that to get it to the guys that we go too late in the game was huge for us,” head coach Gino DiMare said.

Miami responded in the top of the fourth, as Christian Del Castillo smacked a one-out double and scored on Alex Toral’s two-out RBI single to shallow left that beat the shift and tied the game at 1.

The Canes loaded the bases two batters later, with Gil singling and Lala walking before Louisville starter Luke Seed left the game with an apparent injury. Webster replaced Seed and got Dominic Pitelli to line out to first base and end the threat.

“It was probably the loudest I’ve heard our dugout, other than maybe against Georgia Tech on Sunday, so it’s good to see the guys were in the game,” DiMare said. “They never wavered even though we left some guys on base early, and they got ahead of us. It seemed like it was taking a while to get going offensively, but the guy still stayed with it.”

But Gil sparked a rally in the seventh to help the Hurricanes clinch a victory in the series opener against the Cardinals.

“I’m feeling good. I feel like my old self again and I feel like I’m getting into my groove now, which is just the right time for me and for our team,” Gil said. “I’m just trying to keep building off of that.”

Spencer Bodanza followed Rosario on the mound for Miami and struck out a career-high four batters over two scoreless innings before Daniel Federman got the final out of the bottom of the seventh. Miami closer Carson Palmquist struck out five to wrap up a night where Miami pitchers recorded 14 strikeouts, including 10 looking.

“Our pitchers kept us in the game which is another big key,” DiMare said. “That back end of the bullpen, those guys have been really, really big for us.”