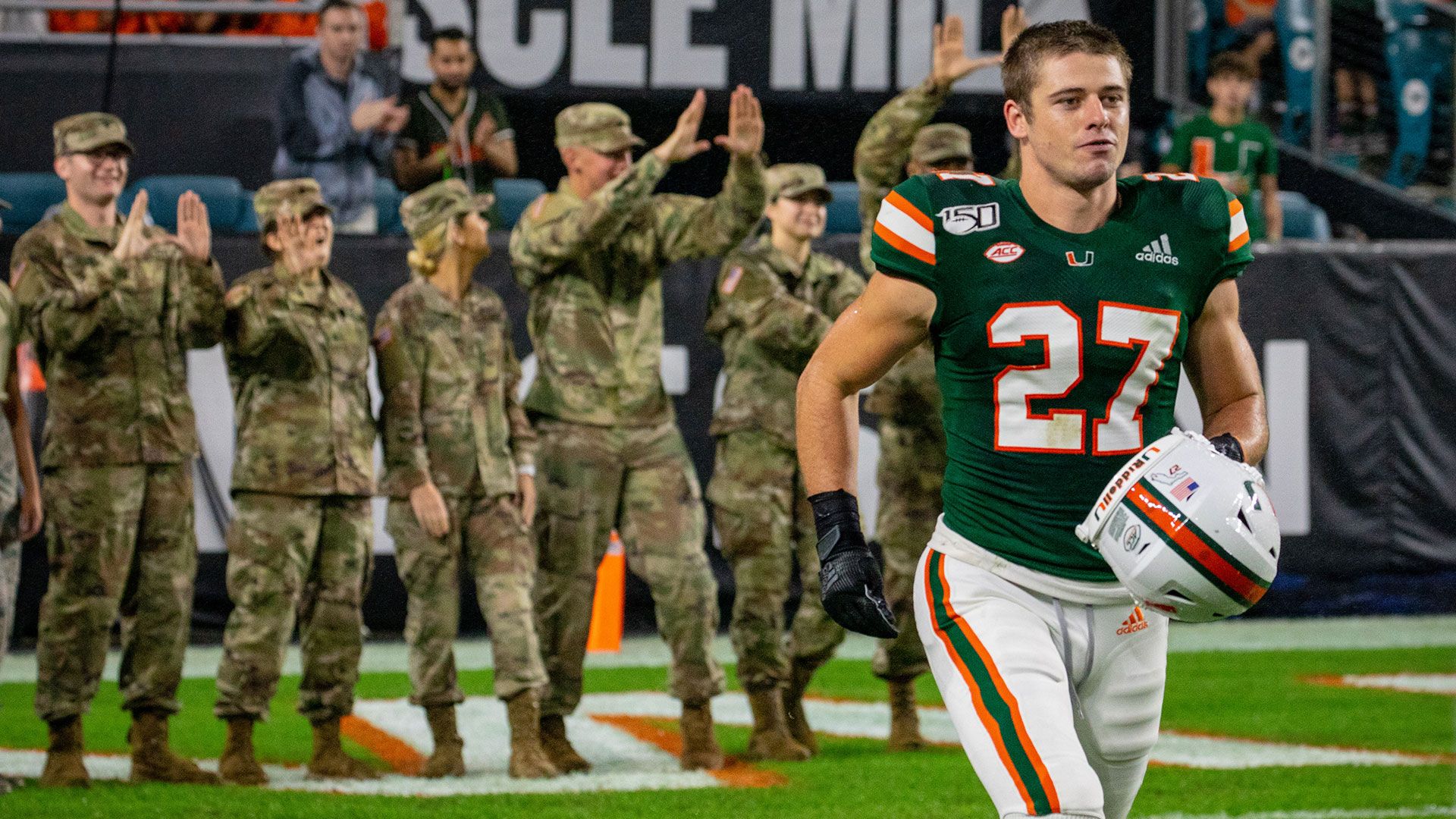 CORAL GABLES, Fla. – It was a conversation Marshall Few knew he had to have.

What the receiver didn’t know was how his message would be received. After all, not many coaches want to hear a veteran player say they’re stepping away from the game – even if their reason for doing so is to pursue a lifelong dream.

“To be honest, I was expecting a little bit different reaction,” Few said of the heart-to-heart he had with head coach Manny Diaz in early April. “I was expecting him to be upset and be like ‘Oh, man, are you sure?’ But he realized how big it was for me and he just said, ‘Dude, that’s freaking awesome.’”

For Few – a former walk-on who was put on scholarship shortly after Diaz was named coach – there aren’t very many good reasons to walk away from the game he’s loved all his life and the team he’s been a part of for four years.

The opportunity to join the U.S. Air Force Special Operations Command program, though, is one of those reasons.

Becoming an elite Airman has been one of Few’s goals for as long as he can remember. His father, Marshall Sr., is a 30-year Army veteran and Few grew up with a deep respect and appreciation for the military.

He considered attending one of the service academies after graduating from Ponte Vedra High School in 2017, but he landed at Miami, where he joined both the football team and UM’s Air Force ROTC program. 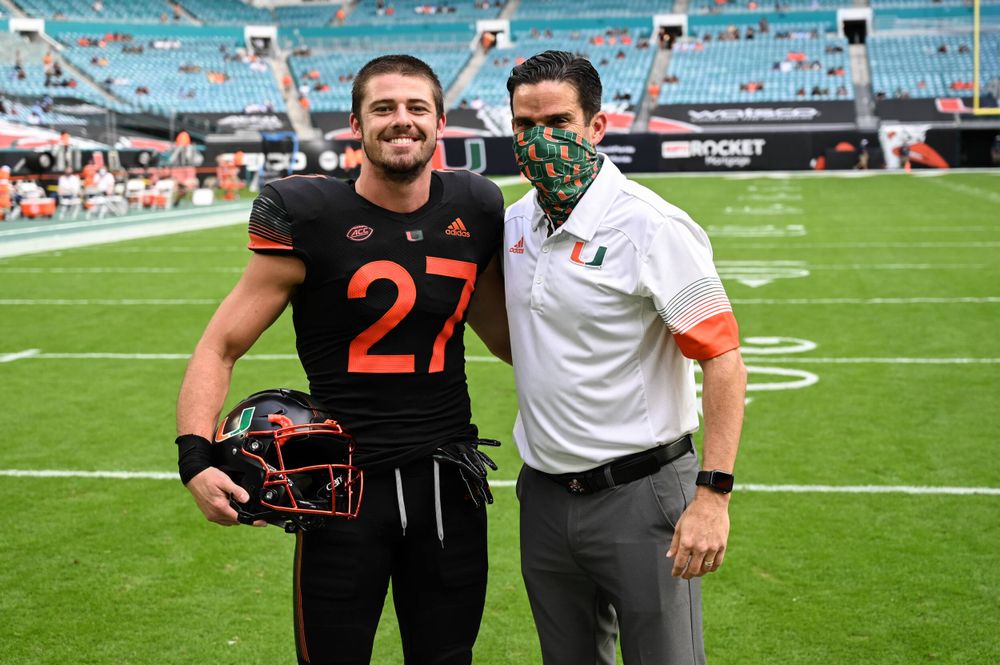 With help from his coaches and his commander, Few has been able to balance the demands of both playing high-level college football with his ROTC responsibilities. He is set to graduate next month as an Air Force officer and had expected to start graduate school and play one more season with the Hurricanes before truly beginning his military career.

But in March, Few took some time away from football to attend a special training session at Hurlburt Field, the home of Air Force Special Operations Command near Fort Walton Beach, Florida.

There, Few was one of 31 aspiring officers who went through a demanding one-week program that challenged participants both physically and mentally.

Of the 31 trainees who started the Phase II program, only 18 finished the week, which included everything from water confidence exercises to IQ testing and psychiatric evaluations. Only a handful of the applicants were selected for the special tactics officer program.

Few was among them. The time to start his military career had officially arrived.

He believes his time as a Hurricane helped him get there.

“Football was the only way I got through that week,” Few said. “For me, thankfully, football was a four-year adventure and it was awesome. It was everything I dreamed of. I got to play in front of thousands of people. To get to be a part of something so special, especially here at the University of Miami, I never thought I’d get to play big-time football like this. But it was a dream come true and the only reason any of it happened was because of my teammates.

“As a freshman, you come in and you don’t know anything. You don’t know anybody. You have to learn the ropes and learn the right way to go about doing things, whether it’s at practice or in the classroom, study hall or literally anything…Then, as you get older and go through the program, you start mentoring the younger guys. I always wanted to be the one to set the example and bring as many people up with me as possible…Being able to follow, to be part of a team and then to become a leader, that’s how I got most of my success from football for Phase II.”

"For me, thankfully, football was a four-year adventure and it was awesome. It was everything I dreamed of."

As excited as Few is to start this next chapter of his life, he knows his work is just beginning.

During his flight back to Miami, he thought about the enormity of what still awaits him, including two years of intensive special operations training that will take him to bases all around the country.

He realized, too, it was time for some painful goodbyes.

Not long after he returned to South Florida, Few met with Diaz and told him he was leaving the football program.

Then shared the news with his teammates. That proved harder than he expected.

“I just wanted to get off my chest how much I care for them and how much of my success was because of them and how good teammates they were to me. I thanked them like five or six times and I would thank them 50,000 times more,” said Few, who addressed the team during spring practice earlier this month. “I really do think that my experiences here at the University of Miami, being a part of this program and having the opportunity to be a leader within the program, has gotten me where I am today. So, yeah, it was tough and I did get a little choked up and I did fight back the tears.” 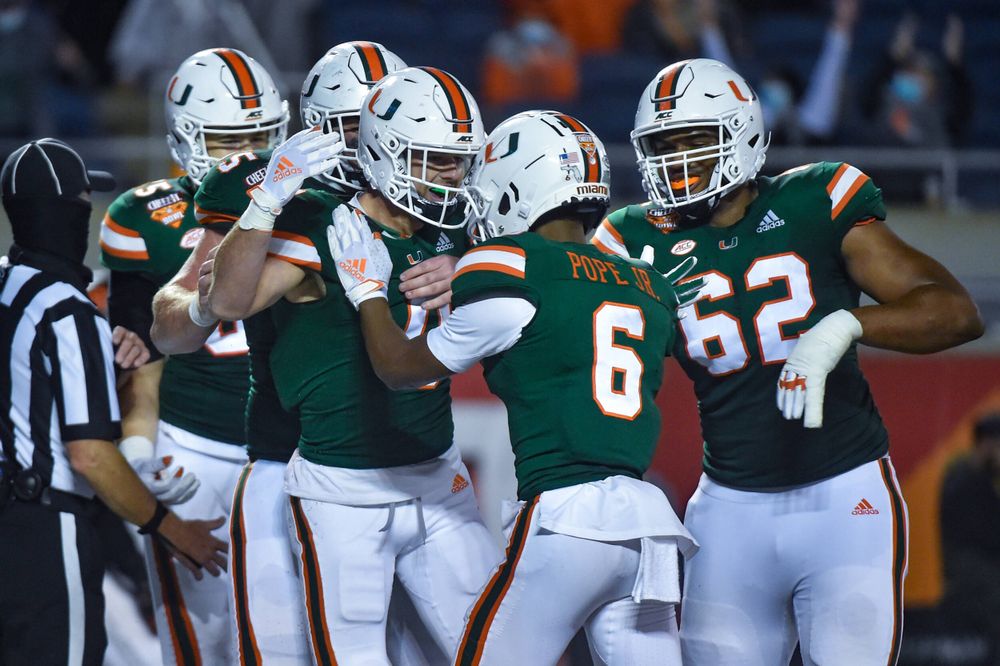 Few leaves Miami having played in 33 games for the Hurricanes. He mostly saw action on special teams and he smiles now thinking about what turned out to be his final play – a successful 2-point conversion that pulled the Hurricanes within three late in the fourth quarter of their Cheez-It Bowl loss to Oklahoma State last December.

It’s a play Diaz says encapsulated the receiver’s tenure as a Hurricane.

“He’s one of the hardest working guys on our team and he’s been able to find a bigger and bigger role, whether it was playing on offense or special teams…That play in the bowl game, we didn’t realize it at the time, but what a great way to punctuate your Miami career…There’s so few people in the role that he’s taking on serving our country. The fact that Marshall is going to be one of them, as a staff, we’re almost kind of humbled to know him. We couldn’t be more proud of him and we know he’ll do great things for his unit and for our country.”