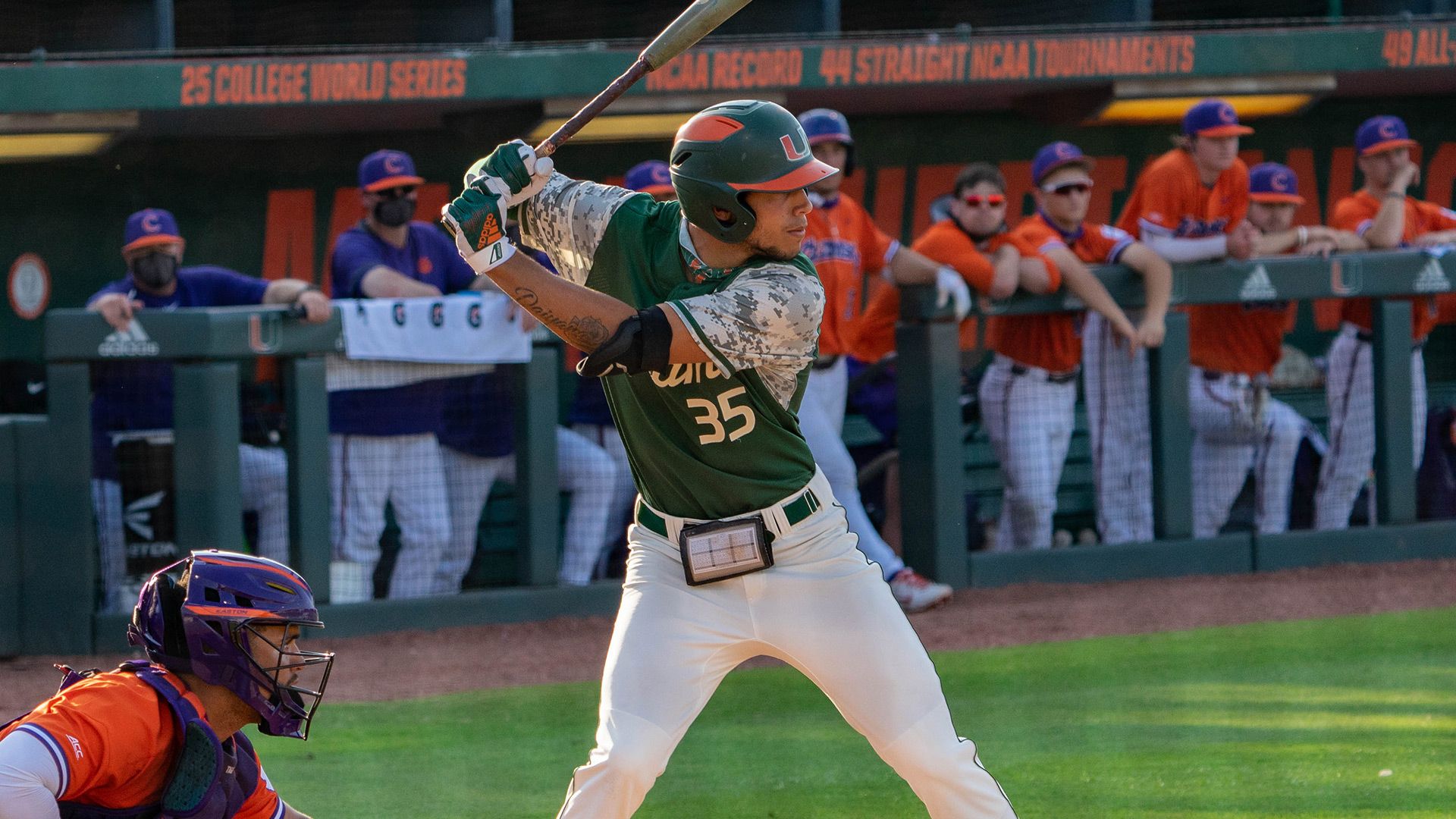 Miami Gets 20th Win with Victory over Clemson

CORAL GABLES, Fla. – It was a seesaw battle to start, but the Miami Hurricanes pulled away with a 10-2 victory over Clemson on Saturday night.

“I’m really happy with how we’re playing right now,” head coach Gino DiMare said. “We scored in five out of the eight innings that we swung the bat in. We scored twice after they scored where we came back and answered. We had a couple home runs and some very good situational hitting.”

While Miami’s bats got hot, it was Clemson that struck first as Dylan Brewer hit a two-out solo homer off Miami starter Jordan Dubberly in the top of the second.

But Miami answered right back, as Christian Del Castillo clubbed a leadoff solo homer off Clemson starter Keyshawn Askew that stayed inside the rightfield foul pole to square the score at 1-1

“One hit gets everybody going because it brings more energy, more focus to help drive in the runs,” Del Castillo said. “I definitely think getting a hit early on in the game gets everybody going. Even if we don’t get ahead, we try to pick each other up as best as we can.”

The Tigers homered for the second consecutive inning, as second baseman Sam Hall hit a one-out solo shot to left that put Clemson back ahead, 2-1, in the third. That was all Clemson would muster against Dubberly, as the right-hander held them to four hits and struck out six over four innings of work.

Anthony Vilar helped the Canes respond in the bottom of the third, smacking an RBI single up the middle that drove in Dominic PItelli and tied the game at 2. Adrian Del Castillo and Christian Del Castillo each added RBI singles, putting the Hurricanes ahead, 4-2.

“Everybody knows that hitting is contagious,” Vilar said. “Once we start hitting, everybody’s going to continue to hit. That’s just how the game of baseball has been going. We’ve just got to stay confident ourselves, be ready to hit tomorrow and tomorrow be contagious as well and we’ll just continue to hit.”

In the bottom of the fifth, Yohandy Morales belted his eighth homer of the season. The two-run shot extended Miami’s lead to four runs, 6-2.

“It feels good and it’s what we need right now,” Morales said of Miami’s offensive improvement. “We had a long talk after Pitt and we’ve been going over a lot of things as a team and what we need to work on and it’s paying off. We’re doing a really good job as a team, so we just want to keep moving forward and keep doing what we’re doing.”

The Hurricanes added a run in the sixth against reliever Nick Clayton, as Jordan Lala singled home Gabe Rivera for a two-out RBI that gave Miami a 7-2 lead.

Miami scored three more in the seventh against reliever Rasesh Pandya. Anthony Vilar led off the inning with a double to left, tying his career-high with four hits, and scored on Christian Del Castillo’s sacrifice fly to right. Raymond Gil followed with a sacrifice fly to right and Alex Toral had an RBI single that gave Miami 10 runs on the evening.

Miami and Clemson will close out this weekend’s series Sunday afternoon at noon.