On Friday night, it was time to turn the pressure up a bit and see how the Hurricanes responded when playing on a much bigger stage – their home field at Hard Rock Stadium.

Turns out, more than a few of Miami’s players – including some of the newest Hurricanes – delivered the kind of performances Miami head coach Manny Diaz was hoping to see.

“We needed it. I thought they reacted very well, Friday night, under the lights. It’s just a different atmosphere than what you see on the Greentree Practice Field or any of the places we get to travel and scrimmage,” Diaz said after the Hurricanes wrapped up their second scrimmage of spring practice. “You especially see it in the younger guys. The game moves a little bit faster out there. It’s a little tough on them, but I think everybody, as the night wore on, got comfortable in the environment and it ended up being a pretty good tug-of-war.”

The Hurricanes will return to Hard Rock once more this month, for next week’s final practice of the spring. Diaz hopes it will help set the tone for an offseason of preparation with an opener against defending national champion Alabama looming in September.

Before all of that, Miami has two more practices scheduled on Greentree and Diaz said he’d like to see his players continue building on all they’ve accomplished over the course of the last month.

“We’re obviously looking forward to coming back here on Saturday with the game that’s on ACC Network for all of our fans to see. We wish we could have our fans here in the stadium, it’s just, hopefully, the last reality of the pandemic,” Diaz said. “But we will be here. We’ve got to get healthy. We’ve got a couple guys nicked up. Get our team healthy and maybe look at a couple different schematic things this last week that will help us out in the fall and then come out here for a great spring game on Saturday.”

With redshirt senior D’Eriq King continuing to work back from his knee injury, Miami’s two young quarterbacks – freshmen Tyler Van Dyke and Jake Garcia – once again, got extensive opportunities Friday to show coaches how they are progressing.

And both made some big plays.

Van Dyke, who appeared in two games last fall, completed 13 of 17 passes for 190 yards with three touchdowns. And Garcia, who has been on campus all of three months and was limited early in the spring because of a minor foot injury, was 18 of 27 for 164 yards with a touchdown and an interception. 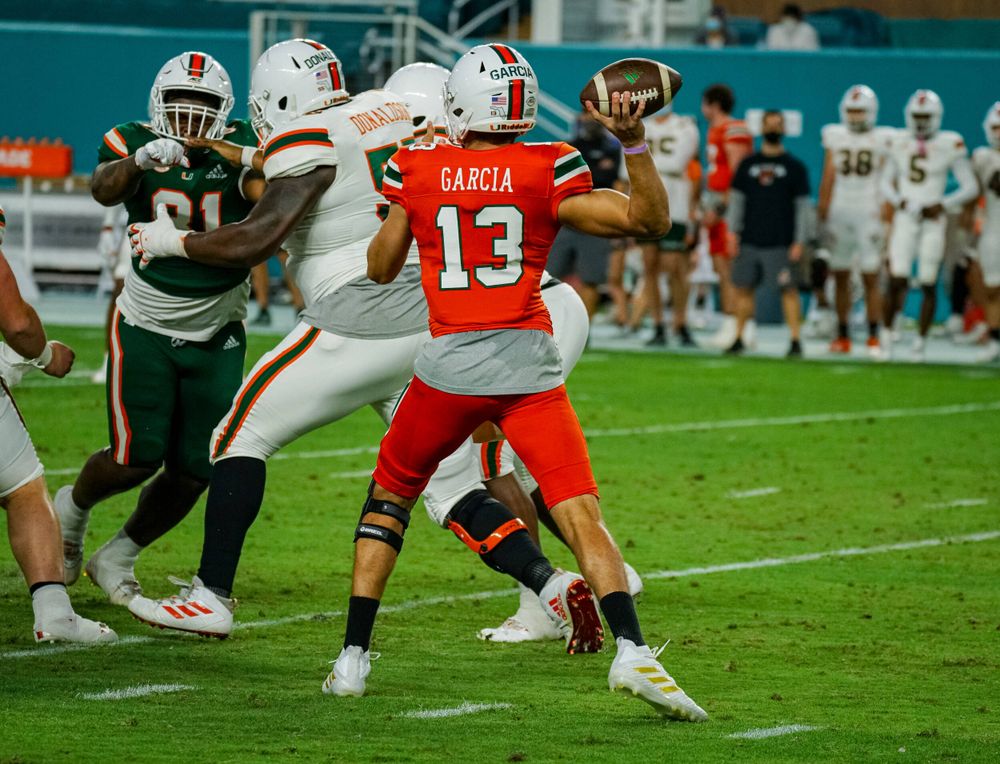 Van Dyke delivered one of the most explosive plays of the night, connecting with Charleston Rambo on a 58-yard touchdown. On the very next possession, Garcia led the offense on a 10-play, 75-yard drive that ended when he connected with Dee Wiggins on a 9-yard score.

After playing four seasons at Oklahoma, Rambo arrived at Miami in January hoping for a fresh start and a chance to work into the Hurricanes rotation.

On Friday, the veteran made a strong case for himself.

Rambo led Miami’s receiving corps with seven catches for 107 yards and earned praise from Diaz who said the receiver “looked explosive all night.”

Fellow receiver Dee Wiggins finished with five catches for 63 yards and two touchdowns, while veteran Mike Harley – in limited action – had three catches for 34 yards and was deemed “super consistent all spring” by Diaz.

“I thought those guy really stood out,” Diaz said of Rambo, Wiggins and Harley.

While the offense managed a handful of explosive plays, the defense was able to notch a pair of turnovers, make tackles behind the line of scrimmage and some of Miami’s youngest defenders were plenty active.

Safety Bubba Bolden, who led the Hurricanes with 74 tackles last year and had a team-high four forced fumbles, had an interception Friday night, while cornerback DJ Ivey defended two passes. 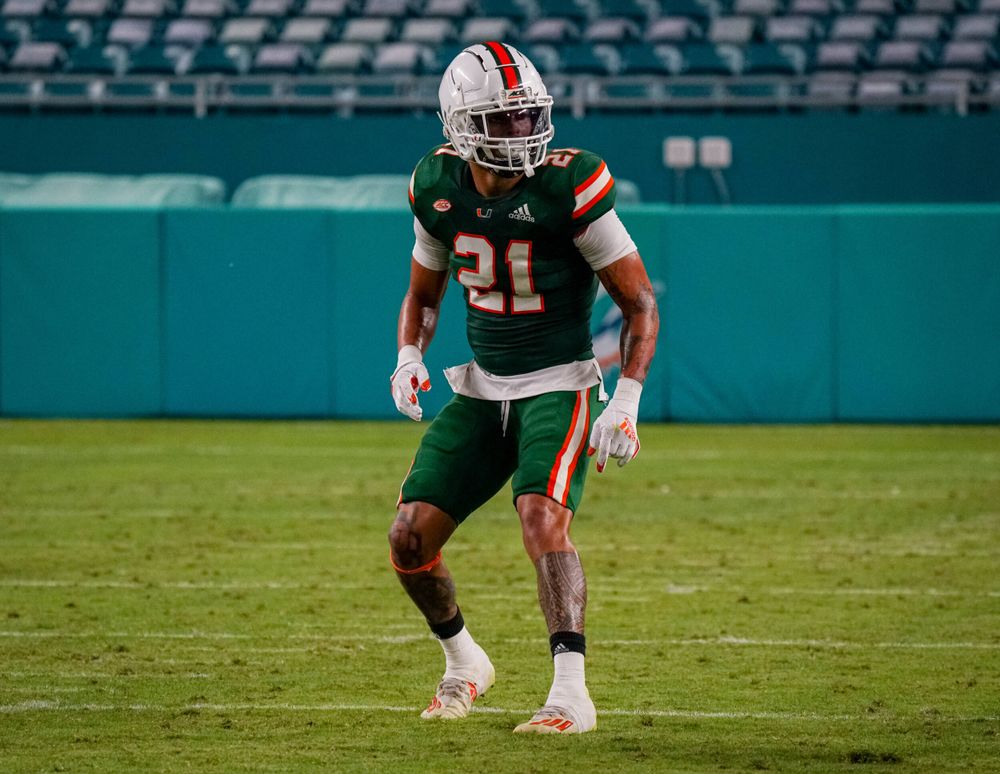 Also impressing were redshirt freshman defensive end Cameron Williams, who had four tackles and broke up a pass; linebacker Avery Huff, who had six tackles, and safety Kamren Kinchens had five tackles.

“It was fun to see some of the young guys…I thought overall, we were able to play a lot of people and I didn’t see a big drop-off, especially once the young secondary kind of got their sea legs after the first couple drives,” Diaz said.

Heading into Friday night’s scrimmage, Diaz said he was eager to see how his team responded not merely to playing at Hard Rock Stadium, but how the Hurricanes handled the installation of more of the team’s scheme.

The offense, for its part, turned in several offensive plays.

Running back Jaylan Knighton had a 31-yard run. Receiver Xavier Restrepo had a 30-yard catch. Rambo’s 58-yard touchdown led to the first score of the night. And Cam Harris delivered both a 30-yard run and a 12-yard touchdown run, during which he hurdled a defender.

“Knighton, good to see, 12 [carries] for 66 [yards], he was our leading rusher. Cam, he did it early in the spring, he had a great red-zone run where he kind of somersaulted in the end zone at Greentree and tonight, he kind of leaped over a defender on his way to the end zone, which is impressive. He had eight [carries] for 39 [yards],” Diaz said. “I thought the offense responded. I thought the defense, in the first half, really dominated the line of scrimmage, similar to the first scrimmage. But I felt the offensive line did a nice job as the day went on, opening up some holes for the backs in the second half.”

Freshman kicker Andres Borregales made a big impression in the Hurricanes’ first scrimmage of the spring, nailing a 42-yard field goal to end the session.

Friday, he connected on all three of his field goal attempts, hitting from 44, 52, and 43 yards. The 52-yarder came as time expired in the first half and set off a wild celebration on both sidelines. 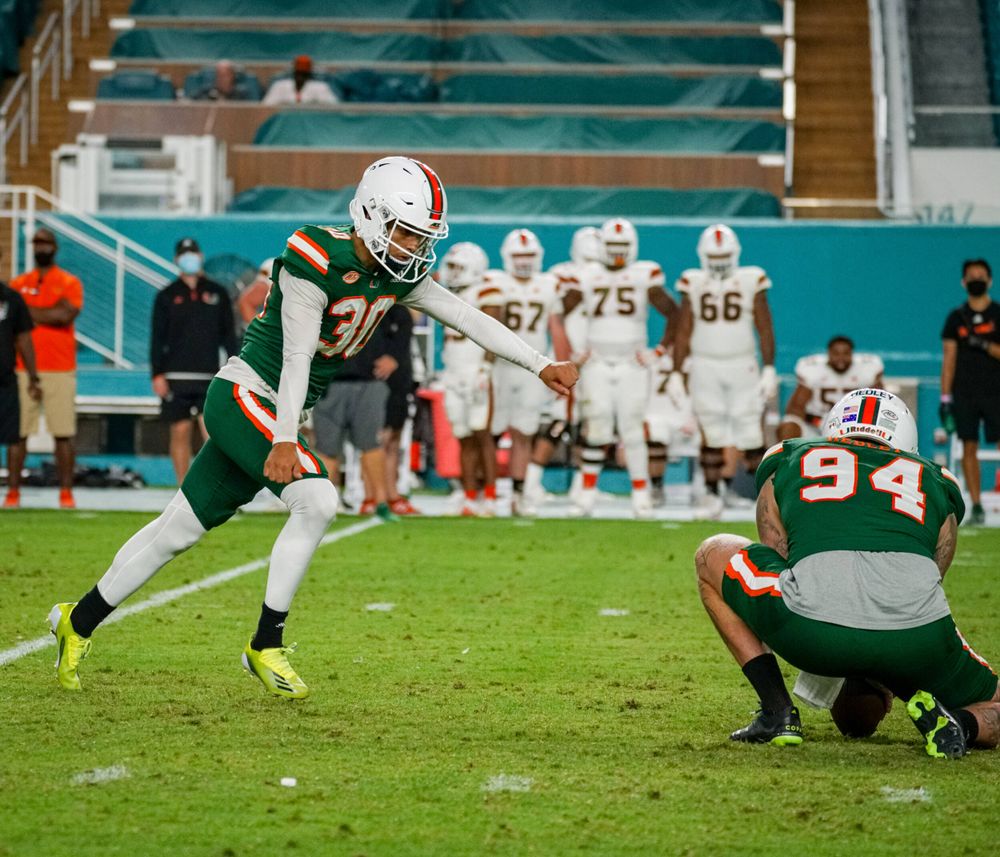 That it came a day after Borregales missed in practice, Diaz said, only made his performance more impressive.

“We started practice [Thursday] and kind of put him on the spot, a field goal, you’ve got to make it and he missed. There was going to be an incentive, the whole team was going to benefit if he made it and he missed. It was kind of a downer,” Diaz said. “I asked [special teams coordinator Jonathan] Patke and [special teams quality control analyst Danny] Kalter and the special teams players how he was afterwards and they said he was amazing. He knew exactly what went wrong and he went right into fixing it.

“We put him in a situation [Friday], he’d already made a field goal and then to come out here, at the end of a one-minute situation to make a 50-plus yarder and I’m telling you…he nailed it. It gives the entire team confidence. It certainly gives him confidence. And he came back and made another one later. Great to see.”