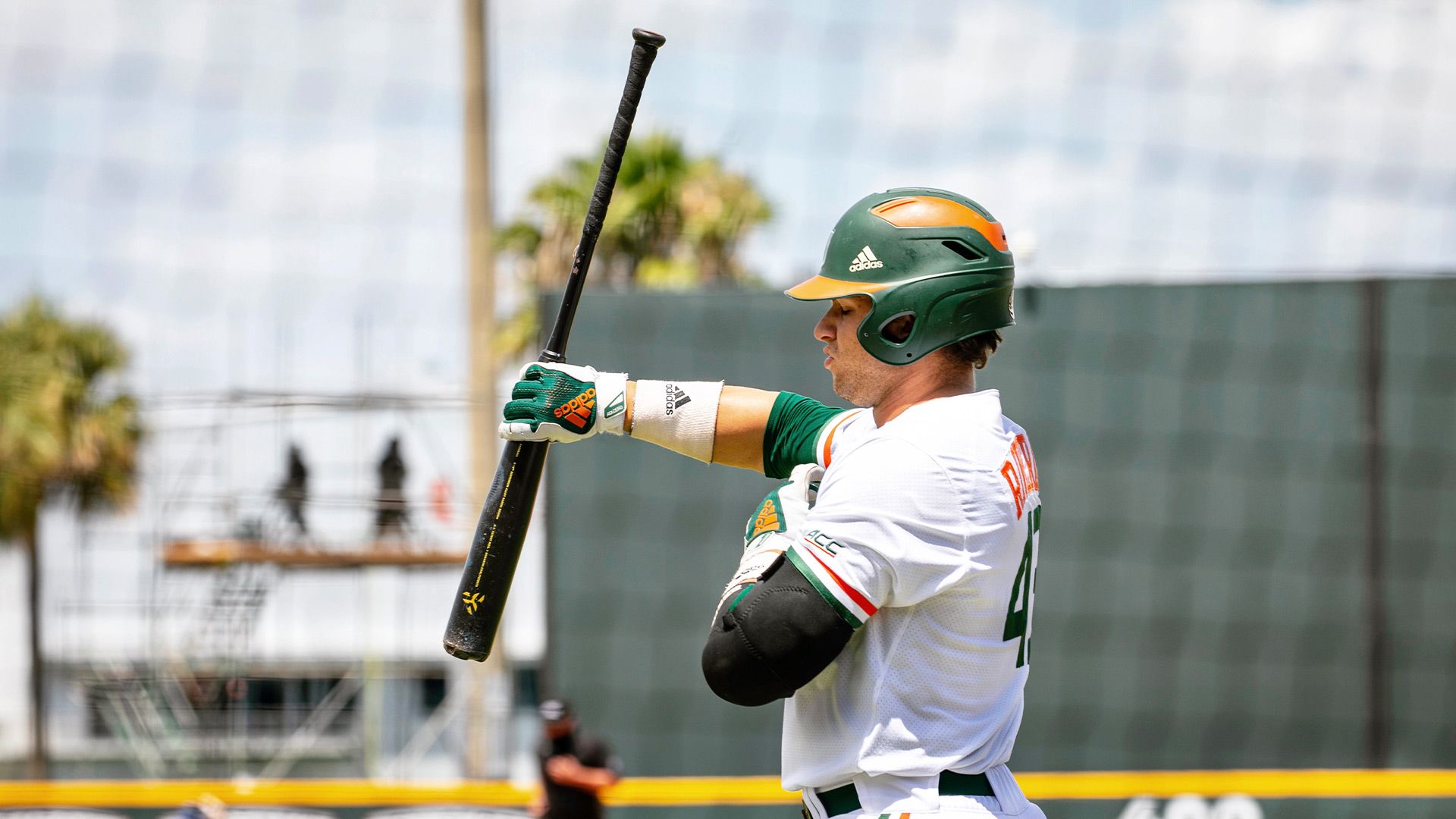 CORAL GABLES, Fla. – Gabe Rivera might be the strongest guy on the Miami Hurricanes, but he is more than just a power hitter.

Rivera is one of Miami’s hottest hitters over the last 10 games, batting .391 with three homers, four RBI and five runs scored, but his success is not something that came out of nowhere.

“What’s been working for me is just really me staying ready,” Rivera said. “I just understand that at any point I can be called upon, and I need to be ready when I hear my name. It doesn’t matter what situation in the game, I have to be ready, whether it’s defense, hitting, anything really. So, when I got my opportunity, I could honestly say that I felt ready to go in because I was prepared. I’ just continued working on a little things in practice, just always in the back of my head knowing that I’m going to get my opportunity, sooner or later, and I better be ready to take advantage of it.”

For Rivera, the change in mindset was essential, but also challenging. As a fourth-year player, he had played in a lot of games in his time at Miami but found his role to be spotty at the beginning of the season. But the veteran refused to let negativity set in and affect his preparation.

“Just staying prepared was so important for me,” Rivera said. “As hard as it was in the beginning, I chose to stay prepared knowing that at some point they were going to call on me to come in and get the job done. It was important to stay prepared, whether it’s hitting, defense, anything, and right when I got my opportunity I felt like I was prepared, and everything is just following work that I’ve been putting in.”

Rivera’s mindset is simple: be ready to play. Whether he is in the lineup or not, The veteran outfielder treats every day like he is expected to be a contributor for the Hurricanes and that’s helped him become exactly that.

“In my head, I expect to play every day and that’s my mindset when I come to the field,” Rivera said. “I might be called on to hit, play defense, run or whatever, so I always have to be ready. It doesn’t matter whether I’m playing or not, any time that I go out there and get work done, it’s to get better and that’s always my mindset is every time I go out there. I’m always trying to improve my game anytime I step on the field. I think it’s important to take that mentality whenever you go out to the field. You should always feel prepared and as long as you continue to work on your craft, you’ll never get tired of it. I think that routine helps you always stay ready for when they call on you.” 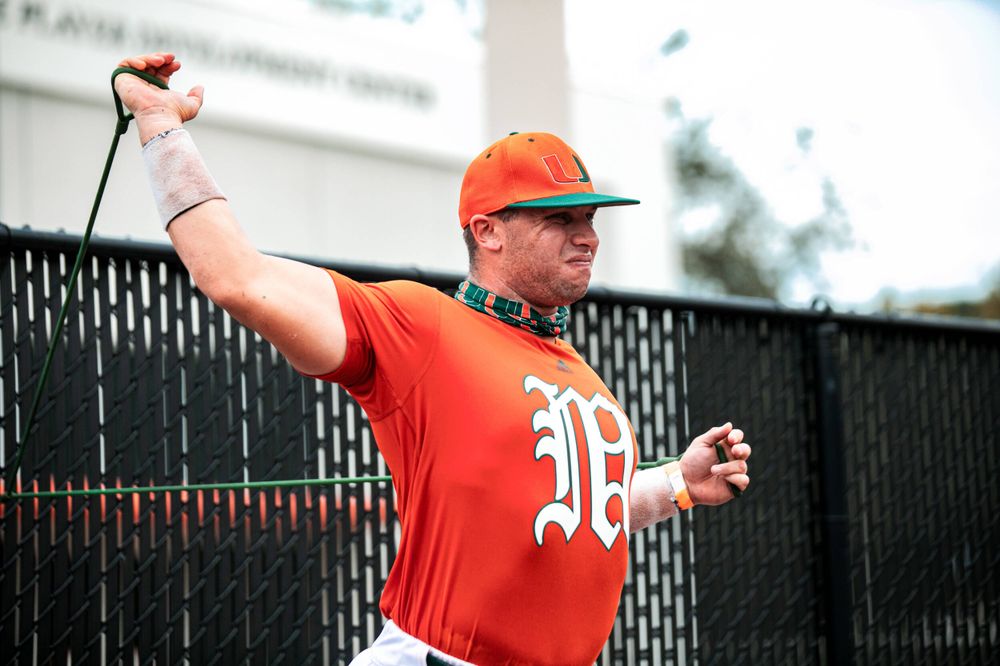 Rivera’s name had been called regularly over the past few weeks and he has stepped up when the Canes have needed him. A grand slam at FGCU helped the Canes put the Owls away, 15-2, and a solo homer at Virginia sparked a rally that led to an 8-6 win over the Cavaliers.

“Grand slams are fun, so I’d have to say the FGCU one was a good one,” Rivera said. “We didn’t really have that big enough of a lead and the good thing about hitting their grand slam was you could just see on their side, it was a bit demoralizing. Anytime you can put up a crooked number, especially like that, and pretty much break the game open, you kind of know that you’ve got the team by the horns and you can just continue to tack on.

“Virginia was a good one too because it got the ball rolling,” Rivera added. “I’m just happy I was able to be the rally starter there. Those are the two that really stuck out to me, especially FGCU anytime you come in big like that with a grand slam, it kind of demoralizes a team and from then on, we pretty much had that game.”

The fourth-year outfielder has been especially strong in midweek games, going 6-for-10 with three homers, seven RBI and four runs scored. Rivera credits his success to his mindset, treating every game as if it’s the most important one.

“I approach the game the same, it just so happens to be in midweeks that I am doing really well,” River said. “Maybe people don’t take midweeks as seriously, but every game is extremely important. You can never take a game off, no matter if it’s midweek or you’re playing wiffle ball in the backyard. All these games are important, especially with the schedule that we have. We can’t afford to blow any game off at all. We got thrown in right to the fire with Florida and started with ACC right after that and these midweek games aren’t easy and these teams aren’t bad. FAU was in the top 25 when we played them and FGCU led in RPI and FIU has a solid squad as well, so you can never take these things for granted. They want to beat Miami and we are kind of circled on their calendar as a big game. You can never take these midweeks lightly because they could beat you at any moment. You have to respect your opponent and when you have that mindset, you’re always going to be ready.”

Miami heads into Wednesday’s matchup against FIU undefeated in midweek games, beating FAU twice and FGCU and FGCU once over the past four weeks. Rivera hopes to continue his hot-hitting ways when the Hurricanes host the Panthers at 7 p.m.

“For me, the next step is to just stay consistent,” Rivera said. “Going out there with the mindset that I’m going to go out and get better and going out to the field with a plan to address the things I need to work on. My mindset is ‘let’s work on it and let’s get it better.’ I’m really just always evolving with my game and when I get my opportunity, I feel prepared. I’m ready when Gino calls my name and know that there is nothing that I haven’t faced before.”

Alex Toral arrived at Miami in 2018 with Rivera and has seen the outfielder grow over the past four years. Toral, who lives with Rivera, is happy to see his roommate thriving at The U.

“I’m honestly excited for him,” Toral said. “He got his opportunity and he’s been making the most out of it. It’s honestly something that I like seeing because we get to go home and even talk about our game plan together for the next day and talk about what we’re looking for in the game and the pitcher. It’s just something neat to have between us and obviously great for our team because he’s helping us win games.”

While Rivera credits his mindset for his success, he also points to growth and development as a player for his ability to produce when his team needs him. A big part of that has been maturing as a player and changing into someone who is more than a hulking slugger looking to hit home runs.

“For me, it’s just about making consistent, hard contact,” Rivera said. “I’m not looking to lift; I’m not looking to always drive the ball out of the yard. I just need to start making more consistent contact and I think when I’m able to do that and simplify that, everything will take care of itself. That’s something that, with time, I’ve had to realize. I just need to put the bat on the ball more often.”

Like most power hitters, Rivera has a tendency to strike out more than he’d like. But the powerful outfielder has worked on a new approach that has him finding more consistent success.

“I hate striking out more than anything,” Rivera said. “I don’t feel like I’m the type of guy that has the strikeout rates that I sometimes go on, but it’s part of the game and I know I can touch that up and clean up some things that will help me out to lower that and continue to put more hard-hit baseballs in play.

“It’s just a process to get to your power and I feel like to get to your hitting ability, you always had to go back to how you got into those good spots,” Rivera added. “For me, how did I start doing well? Well, it’s because I had a simple approach, and I’ve been doing everything that’s been getting me to that point. I can’t stray away from that mindset of process, because if I do, I’m always going to get in trouble with inconsistent at-bats and having peaks and valleys. For me, it’s about staying levelheaded and not getting bored of the process.” 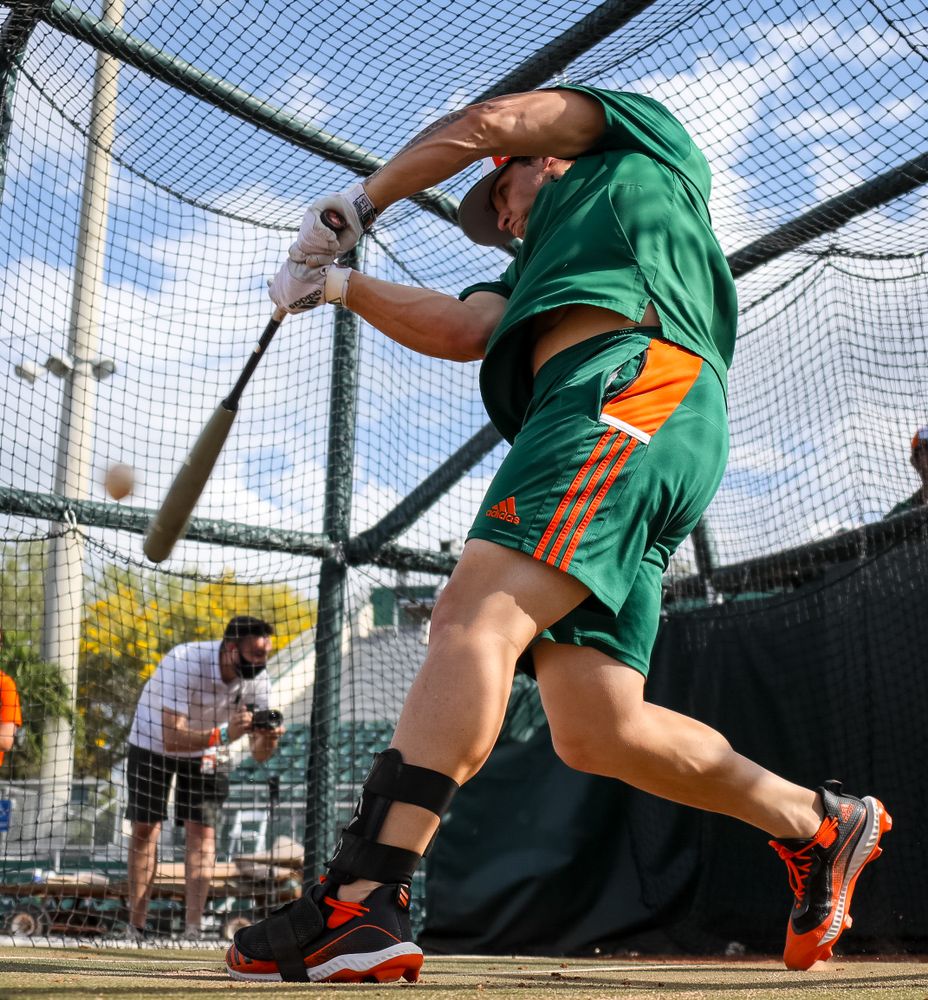 Part of that process has been an adjustment to his batting practice routine.

“BP is fun, for sure, but it’s changed a lot for me,” Rivera said. “Early on, at least for me, I didn’t really have a mindset that BP. I was just like, ‘Let me just go ahead and hit the ball as hard as I can.’ But as you mature and as you evolve and as you want to get better at hitting, you learn to go into BP with a plan and a process. I like to watch our veteran guys like [Adrian] Del [Castillo] and Toral and [Raymond] Gil and see what they do in BP. I like to see like how they prepare themselves to hit, and learn what they are thinking while they’re taking batting practice. For me, it’s not a home run derby anymore, because if I’m just going up there trying to hit home runs, it’s not going produce anything in the game. I’m not really getting any work done that way.”

While Rivera has been one of the most impressive Canes in batting practice in terms of power, he felt he was not able to translate that into the games. So, he looked to his teammates for ways to get better and has found good results.

“Del was the guy that taught me that batting practice isn’t a home run derby,” Rivera continued. “BP is an opportunity to get better at hitting and that’s something that you have to work on in order to take it into the game and feel the way that you want to feel. Watching Del take batting practice and hit line drive after line drive after line drive is something that I took as he’s not trying to do too much and not trying to yank balls to see how far it goes. He knows himself as a hitter and he’s just spraying line drives all over and we all know the type of hitter Del is. So, I learned a lot from that and have tried to take that approach in my BP now. I think if I just focus on just hitting line drives like nice and easy, the power and everything will come because if I’m so used to just finding the barrel and squaring the ball up, the power will be there.”