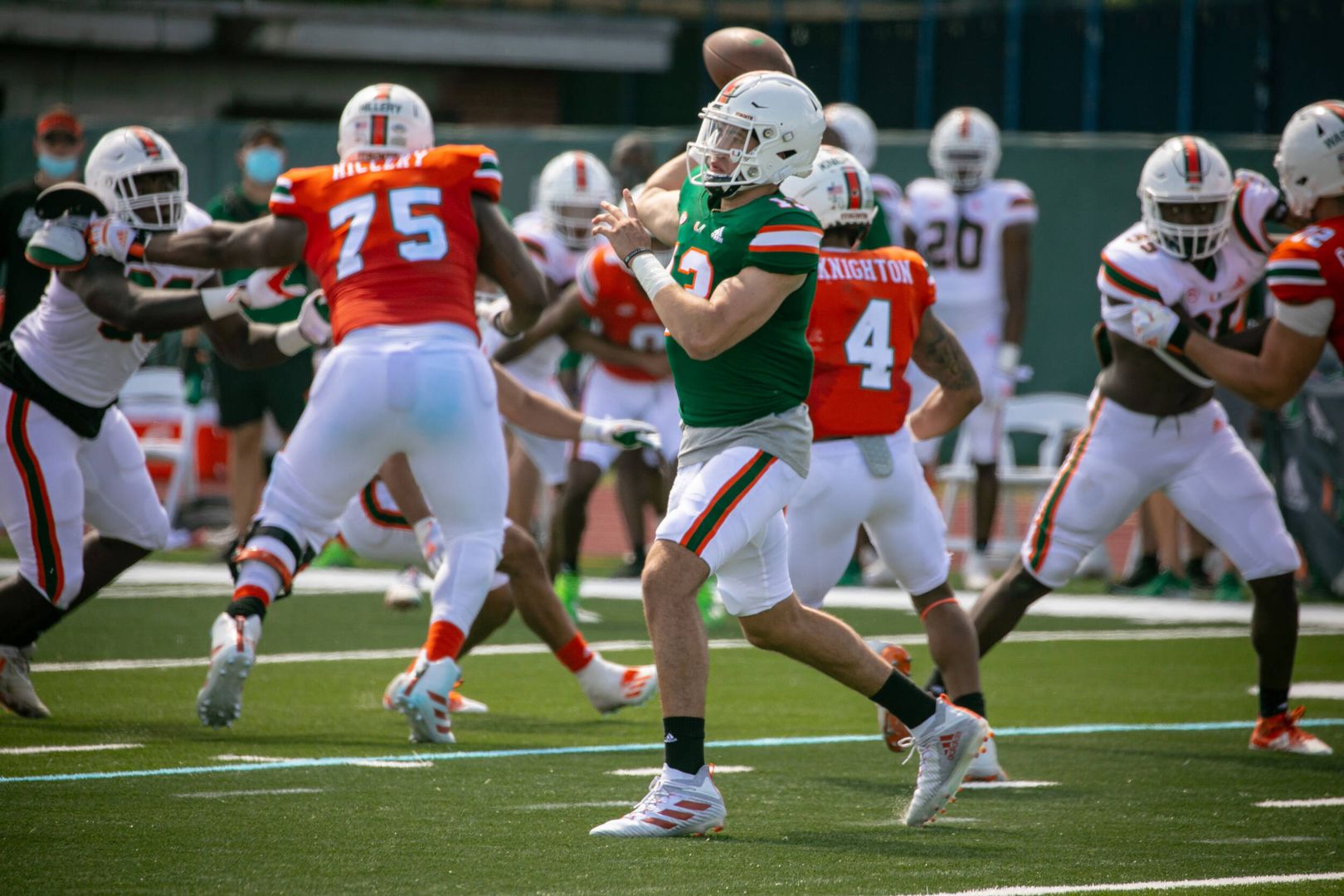 CORAL GABLES, Fla. – His father, a former college football player himself, had tried to prepare him for the moment.

Still, when Jake Garcia pulled on his helmet and ran onto the Greentree Practice Fields for the very first time, there was a sense of awe.

Around him, the quarterback saw reminders of Miami’s rich history and tradition. His practice uniform bore one of the most iconic logos in college sports. And more than a few of his new teammates were veterans who already understood the offensive system he was trying to learn.

In an instant, it hit him. This wasn’t high school anymore.

“Me and my dad were talking about it…And he told me before it happened that when you first get out there with the helmets on and you see the logo or you see the colors out there, it’s going to be an experience,” Garcia said Tuesday after the Hurricanes finished their 10th practice of the spring. “And when we got out there, I was like, ‘Yeah, this is crazy…[You] see them on TV. You dream about it as a little kid and now you’re here.’ It’s something I don’t take for granted and I just want to make the best of my opportunity.”

It’s been an opportunity quite different from the one Garcia may have envisioned when he signed with the Hurricanes last December.

At the time, Miami’s offense was led by D’Eriq King, a proven veteran who started every game for the Hurricanes in 2020 and was a semifinalist for the Maxwell Award, the Davey O’Brien Award and the Johnny Unitas Golden Arm Award after throwing for more than 2,500 yards and 22 touchdowns in the regular season.

But King injured his knee in Miami’s bowl game and though the redshirt senior is expected back on the field ahead of the Hurricanes’ season opener against Alabama, he hasn’t been available this spring while navigating the rehab process.

That means Garcia and the rest of Miami’s young quarterbacks – including freshman Tyler Van Dyke, redshirt freshman Peyton Matocha and redshirt sophomore Ryan Rizk – have all spent time with the Hurricanes’ first-string offense.

"It’s something I don’t take for granted and I just want to make the best of my opportunity.”

And in their own ways, each has impressed and earned praise from teammates and coaches.

After being limited early in spring drills because of a minor foot injury he dealt with during his state championship season at Georgia’s Grayson High last fall, Garcia was cleared to return to practice as a full participant a day before that scrimmage.

He wound up completing 15 of 19 passes for 188 yards and a touchdown in his first on-field test.

“That first scrimmage day can be overwhelming. You’re out there, the coaches are off the field, you’re just kind of out there on your own, you get the real-life accountability of negative plays that go backward and I thought Jake looked like a guy that had been around a long time and was not in awe of the moment,” Hurricanes head coach Manny Diaz said. “He was very comfortable. In addition to the fact of the throws and all that type of stuff, I think that was a thing that everybody on the staff was most pleased about.”

Added Hurricanes offensive coordinator and quarterbacks coach Rhett Lashlee, “I think he just kind of went in and played and that’s always good to see. Your first [questions] are ‘Is a guy going to get nervous? Is he going to be too anxious and overhyped?’ And he just kind of went out there and played and did a nice job. He showed some good instincts and ability to play from the pocket and get the ball out of his hands…He did his job, which is really a good thing for a quarterback.”

The goal for Garcia now, of course, is to continue building on what he’s done in his short time at Miami. That’s something both he and his coaches are confident he can do.

For example, Lashlee said he believes Garcia’s experience last year – of moving from California to Georgia and playing at Grayson – gave the quarterback a taste of what it’s like to have to learn an offense quickly and to adjust on the fly. 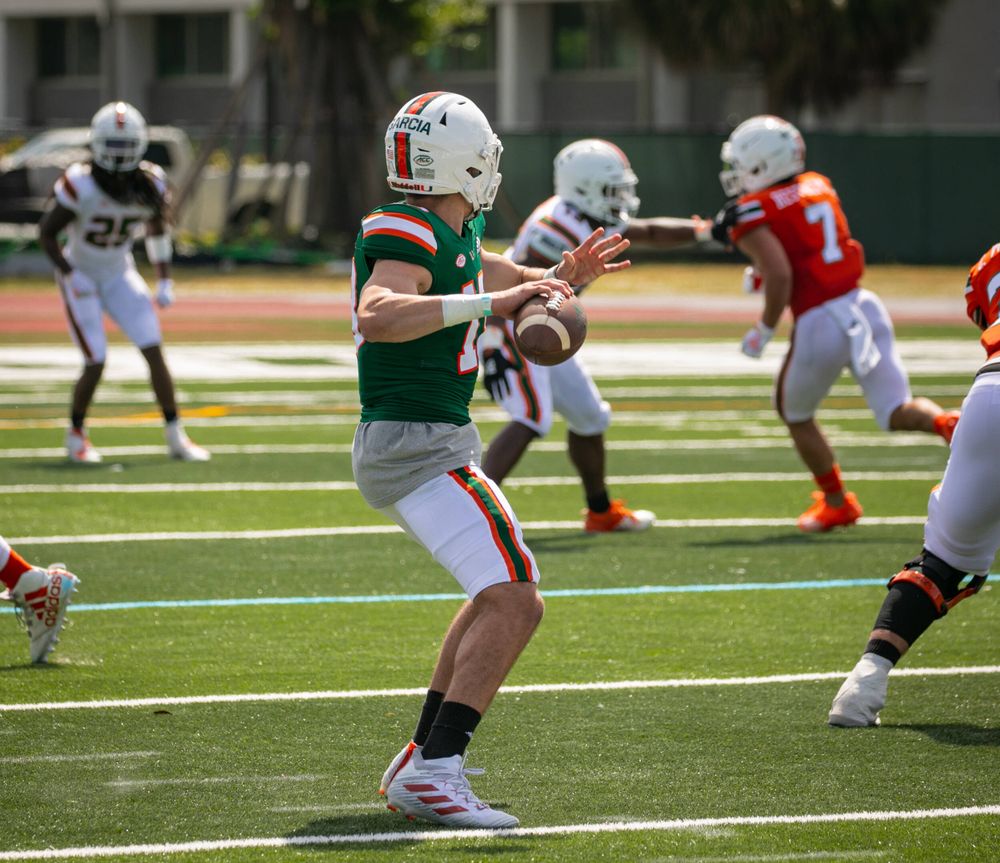 And Garcia himself has taken it upon himself to spend time not only studying film and getting tips from his fellow quarterbacks, but to work with his receivers after practice to continue building chemistry and getting to know his teammates’ strengths.

All of that, he says, will help him continue to grow.

“I feel like I’ve gotten a good grasp of the offense so far in the little time that I’ve been here,” Garcia said. “Obviously, live reps help. Just being able to get out there and practice full speed is huge. I think that’s where you get the most improvement…Even if you mess up, you go out there, do it 100 percent…now you have something to base on what you need to work on and that type of deal. I think that’s something that’s really important.”

The Hurricanes, for their part, say they’re going to do their part to help the former Under Armour All-American, who threw for more than 6,000 yards in high school, shine.

“He’s got good arm strength, he’s got good accuracy and he gets the ball out of his hands quickly. I think he’s really eager to learn,” Lashlee said. “When a young man is pretty smart, when he’s eager…You know, they’re going to make mistakes. That’s part of practicing, learning and developing. But not making the same mistakes over and over again, that’s when you know guys have it. They make a mistake, they learn from it and they’re really eager to not make the same mistake again. That’s how you start growing and developing because once you correct something and fix it, it’s fixed. Then you move on to the next thing and once you fix that, you move on to the next thing…I think he’s got that trait and so far, that’s served him well.”