Miami is ranked No. 15 in the USA TODAY coaches poll and the NCBWA poll. The Hurricanes are in the top 20 in five of the six major polls, coming in at No. 18 in D1 Baseball’s top 25 and No 20 in both the Baseball America rankings and the Perfect Game top 25. Miami returned to the top 25 in Collegiate Baseball’s rankings at No. 21. 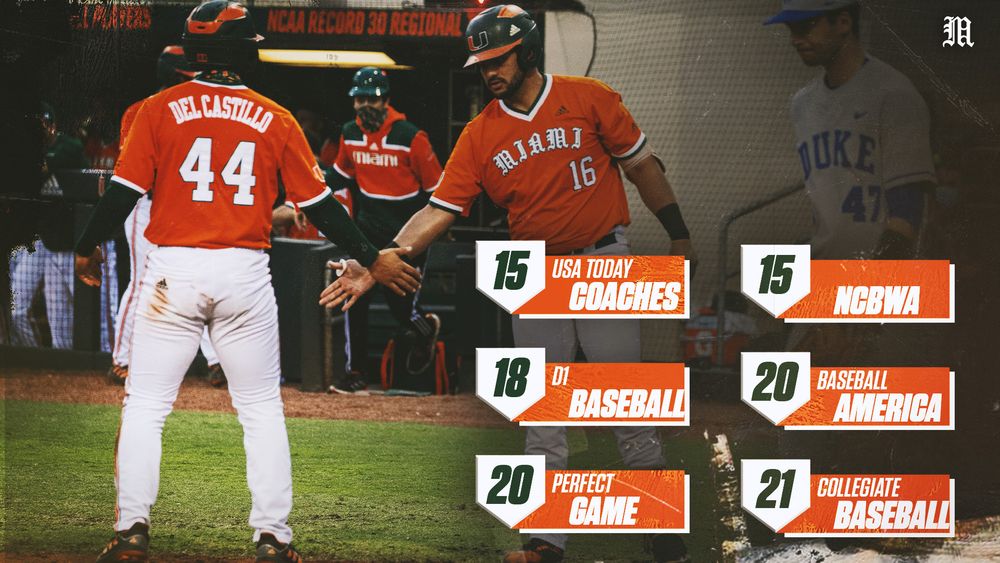 Facing a crosstown rival, the Hurricanes flexed their muscles to pound FIU on Wednesday night. The Canes crushed the Panthers, 21-1, inside FIU Baseball Stadium, posting the second-largest margin of victory over FIU and matching the most runs scored by the Canes since 2015. ACC Player of the Week Adrian Del Castillo drove in a career-high four runs.

With Friday night starter Alejandro Rosario scratched due to an oblique strain, the Canes turned to Daniel Federman on the mound and the fourth-year pitcher turned in his best start of the season to help Miami beat Duke, 3-1.

On Sunday, the Hurricanes closed out their first three-game sweep of the 2021 season, dropping Duke for the third straight day. The Canes beat the Blue Devils, 7-1, after a strong start by right-hander Jordan Dubberly and a key home run by freshman infielder Yohandy Morales put Miami ahead for good.