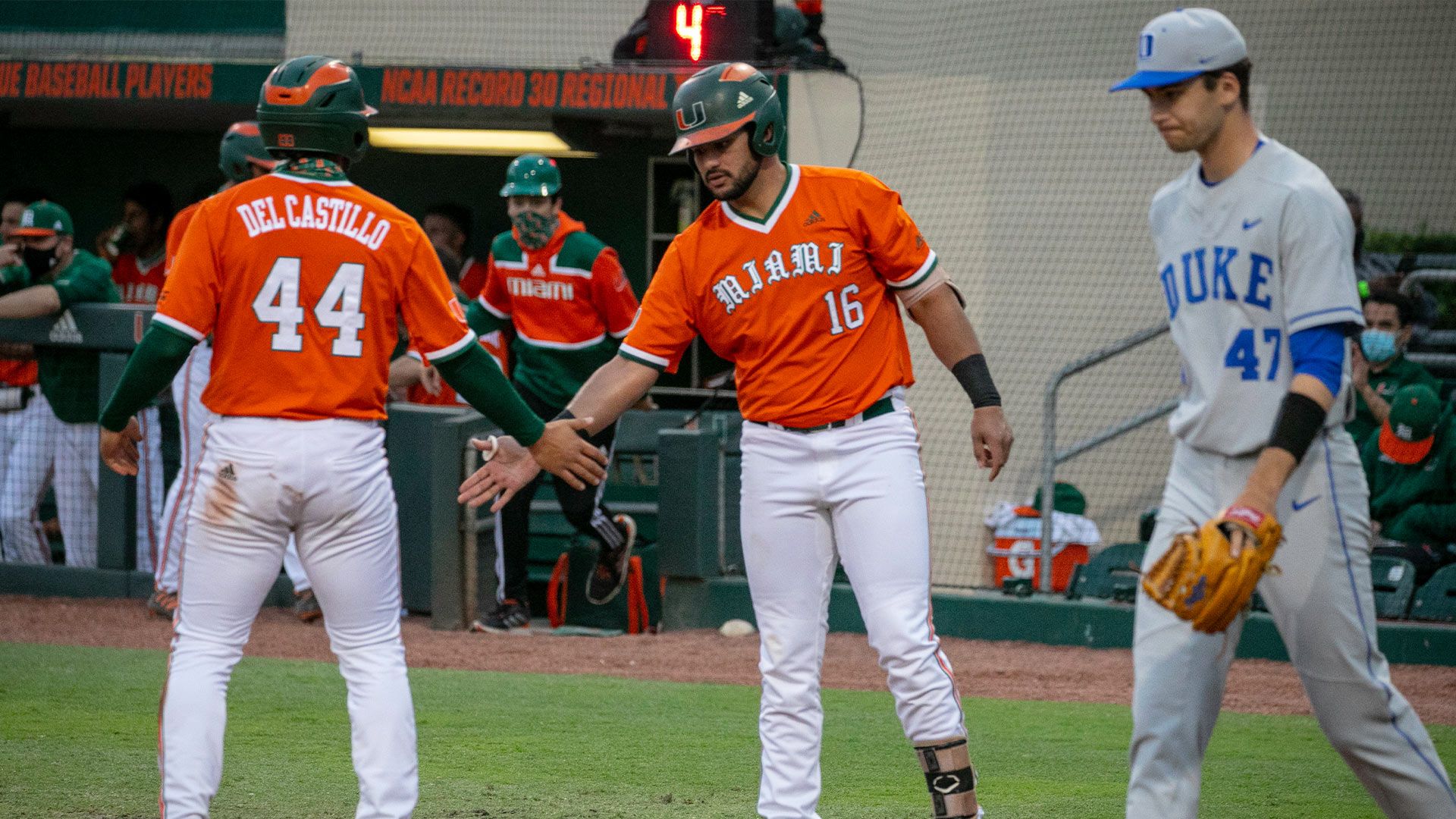 No. 20 Canes Slug Past Duke

The No. 20 Canes scored eight runs over the first two innings, while Christian Del Castillo posted a career-high four hits to help Miami beat the Blue Devils, 11-5, before a sold-out crowd of 628 fans inside Alex Rodriguez Park at Mark Light Field. Miami tied a season-high with 19 hits, matching Wednesday’s output at FIU.

“That was certainly a crazy game and we were able to come out on top,” head coach Gino DiMare said. “We got some big runs early on. We’ve scored now four games in a row in the first inning and of course, the six-run second was big there.”

“It’s definitely fun, getting 19 hits is always a good time,” Del Castillo said. “Everybody chipped in so it was definitely a team effort this time.”

An inning later, the Canes batted around and scored six runs before knocking Duke starter Henry Williams out of the game with two outs in the second. Anthony Vilar’s two-run single was one of four RBI hits in the inning that helped Miami take an 8-0 lead.

“That was awesome,” Del Castillo said. “We got all singles, which our team kind of doesn’t really get many singles. We just try to put the ball in play and things happen, so that’s what we got to do.”

The Canes added a run in the fourth after Duke shortstop Ethan Murray bobbled a grounder off the bat of Adam Frank, allowing Raymond Gil to score.

Duke (11-12, 5-9 ACC) finally got something going in the fifth against Miami starter Victor Mederos, loading the bases before Mario Loperfido hit an opposite-field grand slam that got the Blue Devils on the scoreboard, 9-4.

Mederos earned his first win as a Hurricane, allowing four runs on four hits while setting a new career-best with eight strikeouts over five innings against the Blue Devils.

“It’s always good to get the first one out of the way,” Mederos said. “I think I could have finished stronger. Always that fifth inning comes around and I don’t know why, I get those little jitters. But I’m excited that I was able to get my first win.”

The Canes added two more runs in the seventh, capped by an RBI single from Christian Del Castillo that had Miami set a new season-high for runs scored against an ACC opponent. The Hurricanes previously scored 10 runs in a victory over Wake Forest on Mar. 12

The Canes and Blue Devils will close out this weekend’s series Sunday at 1 p.m. Right-hander Jordan Dubberly will start for Miami opposite Duke right-hander Jack Carey.