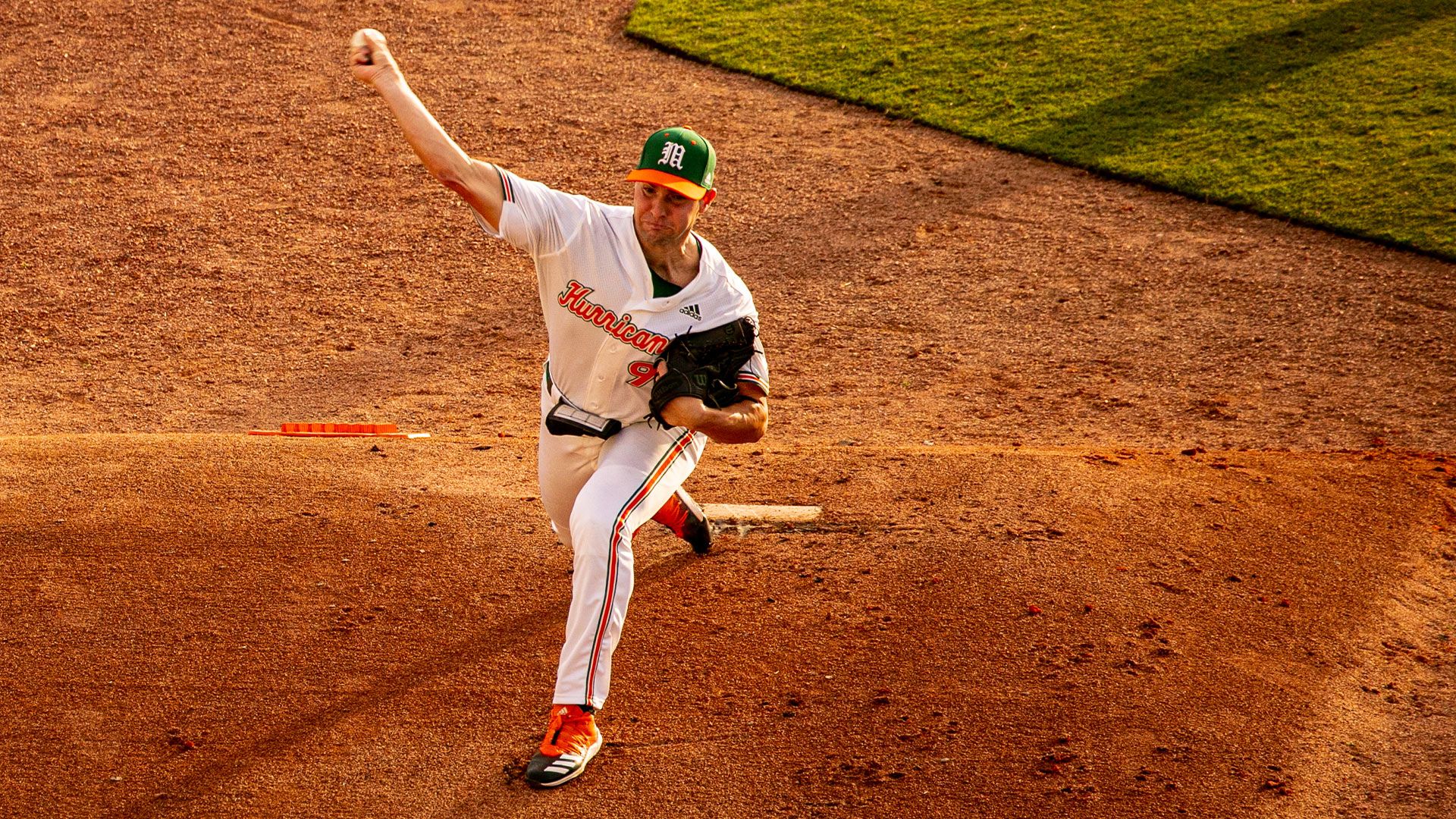 CORAL GABLES, Fla. – Uncertainty loomed ahead of Friday’s series opener against Duke, but the Miami Hurricanes had multiple veterans step up to lead the team to victory.

With Friday night starter Alejandro Rosario scratched due to an oblique strain, the No. 20 Canes turned to Daniel Federman on the mound and the fourth-year pitcher turned in his best start of the season to help Miami beat Duke, 3-1, before a sold-out crowd of 651 fans inside Alex Rodriguez Park at Mark Light Field.

“We pitched very well,” head coach Gino DiMare said. “Federman with a huge, huge start for us. Obviously hasn’t had the start of the season that he’d like. Alejandro, we had to scratch him from the start and it’s a big part of being a good team is you’ve got to have guys to step up and Federman is the perfect guy to do that. He’s a veteran guy and it was huge. Stepping up for our number one guy on a Friday and do what he did was outstanding.”

Federman rose to the occasion when his team needed him most, turning in his second strong outing in a row and was rewarded with his second win of the season.

“I’m a fired-up guy, everybody knows that,” Federman said. “It’s competitiveness but I’m just going out there and being myself, not trying to be somebody else, not trying to be reserved, not saving myself for later in the game. If all I got that day is three or four innings, that’s all I’ve got that day. I need to go out there and pitch with a little bit more intensity like I did today.”

The right-hander held Duke to one run on five hits over six innings, striking out four batters. While Federman was excellent on the mound, he credits his defense for helping him limit Duke’s offense.

“You’ve got to build off of each outing, you got to learn from each outing,” Federman said. “That’s why it’s a team game. When your name is called, you’ve got to step up. I’m a veteran and I expect to do well, and I expect to succeed at this level and on this team. I’m glad I came through for my guys today. They made some great plays for me; we scored some runs and now we’ll build off that going into tomorrow.”

While Federman held the Blue Devils in check, Miami (14-8, 8-7 ACC) scored in the first inning for the third consecutive game. Anthony Vilar reached on a one-out double to left and scored when Yohandy Morales’ sacrifice fly to center allowed the second baseman to tag up from third and cross home plate.

In the bottom of the fourth, Christian Del Castillo crushed a 1-1 pitch from Duke starter Cooper Stinson deep to right for his first homer as a Hurricane.

But Alex Toral belted a solo shot with two outs in the bottom of the sixth that gave the Canes a two-run lead.

“It’s one of those games where we knew beforehand with the wind blowing really hard in that it was probably going to be this type of game,” DiMare said. “Fly balls were not going to get it done, probably going to be low scoring. Of course, the two home runs we hit were line drives and the sac fly we hit a line drive with a man on third there in the first inning.”

Federman turned the ball over to right-hander Anthony Arguelles, who tossed a scoreless seventh, and Miami turned to closer Carson Palmquist in the top of the eighth looking to get the final sixth outs of the game.

“When he comes in I can tell you this, the confidence in the team is obviously cranked up a bunch of notches,” DiMare said of Palmquist. “Having said that, we can’t take it for granted. There’s going to be a time where he’s going to give up a blooper, a home run or something’s going to happen because he is human and we’ve got to do a good job. We had a chance to score to add to that lead there in the eighth inning. We had [Adrian Del Castillo] get a double and [Christian Del Castillo] moved him over and we’ve got to do a good job of getting that run in and we did not. Because at some point, something’s going to happen because he’s human; Palmquist is human. He’s not going to be perfect all the time, but it has been amazing to watch. It makes a head coach look really great when you go to a closer like that.”

Palmquist, who is tied for the national lead in saves, struck out the game’s final four batters to secure his eighth save of the year.

“I try to think of pitchers that have come through here, closers that have dominated the way he has and I don’t know if I can recall one,” DiMare said. “We’ve had we had a few guys back in the day when they came in it was over, I mean you just knew it was over, they were that good, they dominated. But not many, not many and I don’t know if they’ve done it like him and he’s doing it really with one pitch. I told him the other day when he gets his breaking ball going, his off-speed stuff, I mean, he’s dominating with the fastball. Imagine if he gets his off-speed working, which he tried to throw a few more today but he’s got to get better command of it, no doubt. You’ve got to go with what works and the fastball is what’s been working. He’s got the best command of that.”