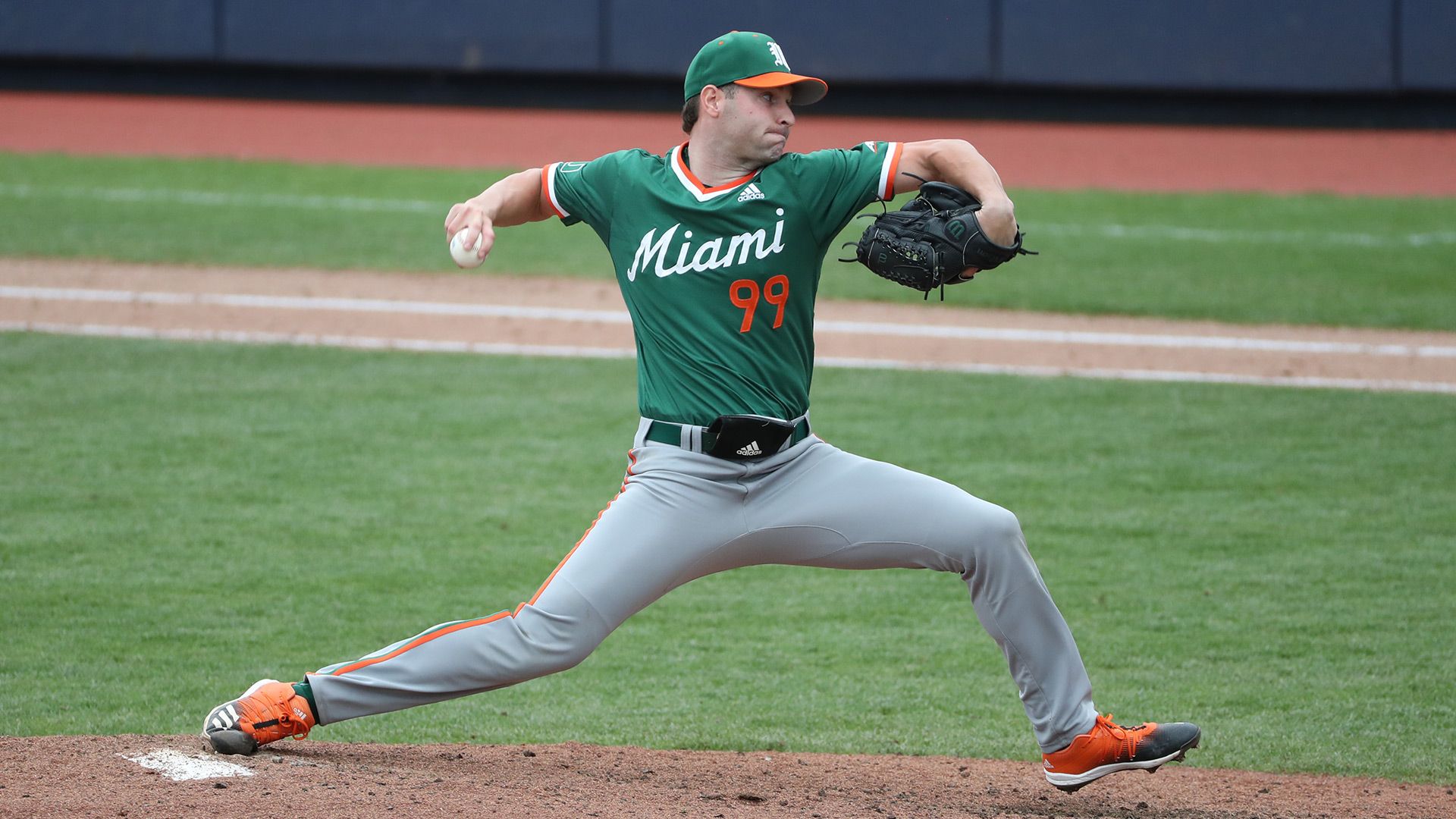 CHARLOTTESVILLE, Va. – The Miami Hurricanes woke up Sunday morning not knowing when or if they were going to play a baseball game.

Inclement weather forced the start of Sunday’s series finale to move up to the morning and back to the afternoon. But the skies cleared and the Canes were ready to play, clinching a series victory over the Cavaliers.

“We were up at 6:30 and eating at seven because everyone had in their minds that we were playing at 10 o’clock,” head coach Gino DiMare said. “We knew that there was a chance that they could change it and they called us at seven and changed the game time. We didn’t know when the time was and we just had to sit and wait. Then, all of a sudden, they give you the call and you’ve got to be ready to go and that’s how it went. You’ve got to make those adjustments and I thought our guys did a good job coming out ready to play, especially after a tough one yesterday. Great job by our guys of coming back and getting the series.”

The No. 18 Canes (12-8, 7-7 ACC) showed resilience against one of the top pitchers in the ACC, battling back against UVA right-hander Mike Vasil to earn the series win with a 4-2 victory inside Disharoon Park.

After tying the game in the sixth, Miami took the lead for good in the top of the seventh. It started with Christian Del Castillo’s leadoff base hit to second. The veteran outfielder was in motion when Alex Toral followed with a base hit to center, putting runners at the corners for Raymond Gil’s sacrifice fly to right that sent Del Castillo home and put the Canes ahead, 3-2.

“We had a guy running with two strikes and one out in Delly and Toral did a good job with two strikes to hit the ball the other way and created first and third and we were able to get a run out of that situation,” DiMare said.

Right-hander Daniel Federman helped himself in the bottom of the seventh, snaring a hard-hit ball by Nic Kent that would’ve driven in two runs and flipped the score. But the pitcher flipped the ball to Toral at first to end the inning and strand a pair of UVA runners, protecting Miami’s one-run advantage. The right-hander earned his first win of the season, throwing 3.1 scoreless innings while striking out five.

“Fed has had a tough year and I’m really, really happy to see him come out and pitch the way he did in a real crucial situation in the game,” DiMare said. “We had to hold that and get the lead, which we ended up getting the lead and he got his first win, which is great.”

The Hurricanes added on in the eighth, as Yohandy Morales hit his team-leading fifth homer to open the inning. The solo shot knocked Vasil out of the game and gave the Hurricanes their biggest lead of the day, 4-2.

Miami closer Carson Palmquist shut the door in the ninth to pick up his seventh save of the season and give Miami its third ACC series victory.

“Ten strikeouts and no walks and that’s the hardest team to strike out in the conference, probably in the country,” DiMare said. “They don’t strike out a lot, so for us to have 10 strikeouts where Dubberly had four and Fed had five in three and a third before Carson got the last one in the ninth and no walks was huge. Yesterday, that was the difference. We walked three guys in that one inning that they scored the four runs.”

The Canes scored late to take the series finale, but Miami also got on the scoreboard in the first thanks to some defensive miscues by the Cavaliers.

After getting shutout on Saturday, Miami wasted little time getting on the scoreboard in Sunday’s series finale. Leadoff hitter Jordan Lala reached on an error by second baseman Max Cotier and advanced to second on an errant pickoff throw by Vasil. The third-year outfielder scored on a one-out sacrifice fly by Morales, giving the Hurricanes a 1-0 lead.

After retiring the first nine batters he faced, Jordan Dubberly surrendered his first hit in the bottom of the fourth. Kent doubled through the left side and later scored on an RBI single to left by Brendan Rivoli that evened the score at 1.

Dubberly was impressive in his first career start Sunday, allowing two runs on just three hits over a career-high 4.2 innings pitched and tying a career-best four strikeouts. The right-hander was replaced on the mound by Federman with a runner on second and two outs in the bottom of fifth.

“It was Jordan’s first start and he was very, very composed,” DiMare said. “He pitched the way that we thought he can pitch when we recruited him. We’ve kind of compared him a little bit to Brian Van Belle and there’s some similarities there. He’s going to get better and better. He just got a little bit better each time and I thought he showed it today how much he’s improved.”

Federman got a ground ball and appeared to be out of the inning, but Dominic Pitelli’s throwing error allowed Chris Newell to reach base and Devin Ortiz to score from second to put Virginia ahead, 2-1.

The UVA lead would not last long, as Gabe Rivera led off the sixth with a base hit and scored on a one-out RBI single by Lala that tied the game at 2.

“You’re not going to hit for power all the time,” DiMare said. “Today was a good example where we were able to do some things. We laid down a sac bunt, we got a guy over and we knocked him in on a Lala clutch hit with a man on second base.”

Miami is back in action Wednesday, closing out a five-game road stretch with a midweek meeting at FIU. First pitch is scheduled for 7 p.m.