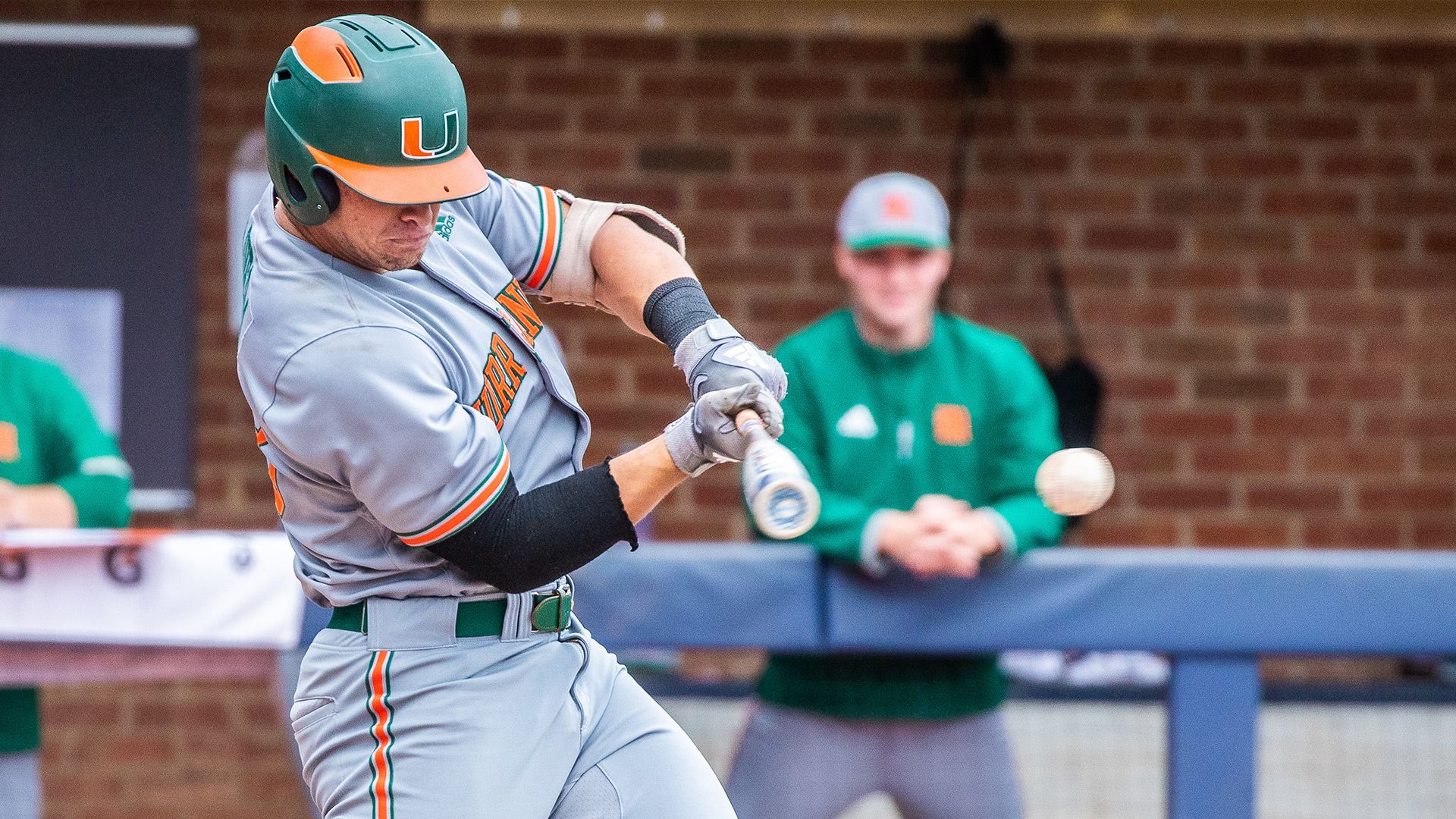 CHARLOTTESVILLE, Va. – It took longer than they would have liked, but the Miami Hurricanes finally broke thru with a rally against the Virginia Cavaliers and the five-run inning proved to be the difference in the series opener at Davenport Field.

The No. 18 Canes came back from a 2-0 deficit to take Friday afternoon’s game over Virginia, 8-6, posting a pair of rallies late in the game to secure a victory over the Cavaliers.

After stranding the bases loaded three times over the first five innings, Miami finally got a run on the board in the top of the sixth, as Gabe Rivera destroyed a 1-1 pitch from Nate Savino that was hit out of Disharoon Park. The homer was Rivera’s second of the week, as the outfielder hit a solo shot at FAU on Tuesday night.

“Gabe got it going with the home run because we hadn’t really done a whole lot,” head coach Gino DiMare said. “We got a lot of guys on base by walking and hit by pitches and some errors they made and we didn’t capitalize. We left a lot of guys on base early in the game and Gabe’s solo home was huge. It was 2-0 at the time, so I made it a one-run game but it got us going and we had the beginning right there.”

The Canes (11-7, 6-6 ACC) loaded the bases later in the sixth and finally scratched a run across, as Yohandy Morales beat out a double-play ball that extended the inning and allowed Dominic Pitelli to score the tying run from third.

Miami got its first bases-loaded hit of the game with two outs in the top of the sixth and it was a big one. Team RBI leader Christian Del Castillo’s two-run single up the middle off reliever Zach Messinger gave the Hurricanes a 4-2 lead and raised his season tally to 18 runs batted in. Alex Toral followed with an RBI single to left to cap the five-run rally that flipped the game in Miami’s favor.

“He’s been our most clutch hitter to this point in the season, which means when guys are in scoring position he’s been our best hitter on the team by far,” DiMare said of Del Castillo. “His batting average with runners in scoring position is by far the best on the team, and it’s only going to go up after today’s game with guys in scoring position. That was huge. It was with two strikes and two outs, which is even bigger. They’re one pitch away from getting out of the inning, and he hits a breaking ball hard up the middle that was a big hit for him and for us.”

UVA (9-12, 3-10 ACC) got two runs back in the seventh, as Kyle Teel hit a two-out solo homer off reliever Anthony Arguelles and Zack Gelot followed with an inside-the-park homer that brought the Cavaliers within a run.

DiMare called for closer Carson Palmquist to protect the 5-4 advantage and the lefty got out of the inning to keep Miami ahead by a run.

“We’re going to him in the seventh inning with two outs. This is second time we’ve done that, and we made it interesting, but he still got it done,” DiMare said. “He’s one of the better closers in the country and he can be even more dominant once he starts command in his offspeed pitches.”

Morales gave the Canes some breathing room, leading off the top of the eighth with his fourth homer of the season, and Toral added an RBI fielder’s choice. Raymond Gil followed with an RBI single up the middle to cap a back-breaking three-run inning.

Devin Ortiz hit a one-out homer in the eighth off Palmquist that snapped a 14.2-inning scoreless streak to start the 2021 season. The lefty allowed another run in the ninth when Brendan Rivoli singled home Teel to bring the Cavaliers within two, but Palmquist struck out the side to close out his sixth save of the season.

“It makes it easy for a coach to be able to go to a guy like that,” DiMare said. “He’s still got to get command of his offspeed pitches, because some guys got to the fastball there. He had some bad luck too with some of the things we did behind him, but we’re obviously confident in him.”

Miami loaded the bases in each of the first two innings, but UVA starter Griff McGarry pitched out of trouble in each frame.

The Cavaliers rewarded him with two runs in the bottom of the second, as Christian Hlinka doubled to right-center, allowing Rivoli to score from first to give Virginia a 1-0 lead. Max Cotier followed two batters later with an RBI double that pushed home Hlinka and doubled the Cavs’ score.

UVA head coach Brian O’Connor turned to Nate Savino on the mound after two complicated innings from McGarry. The lefty pitched out of a pair of bases-loaded situations in the fourth to keep Miami scoreless and elevate the number of runners left on base by the Canes to nine over four innings.