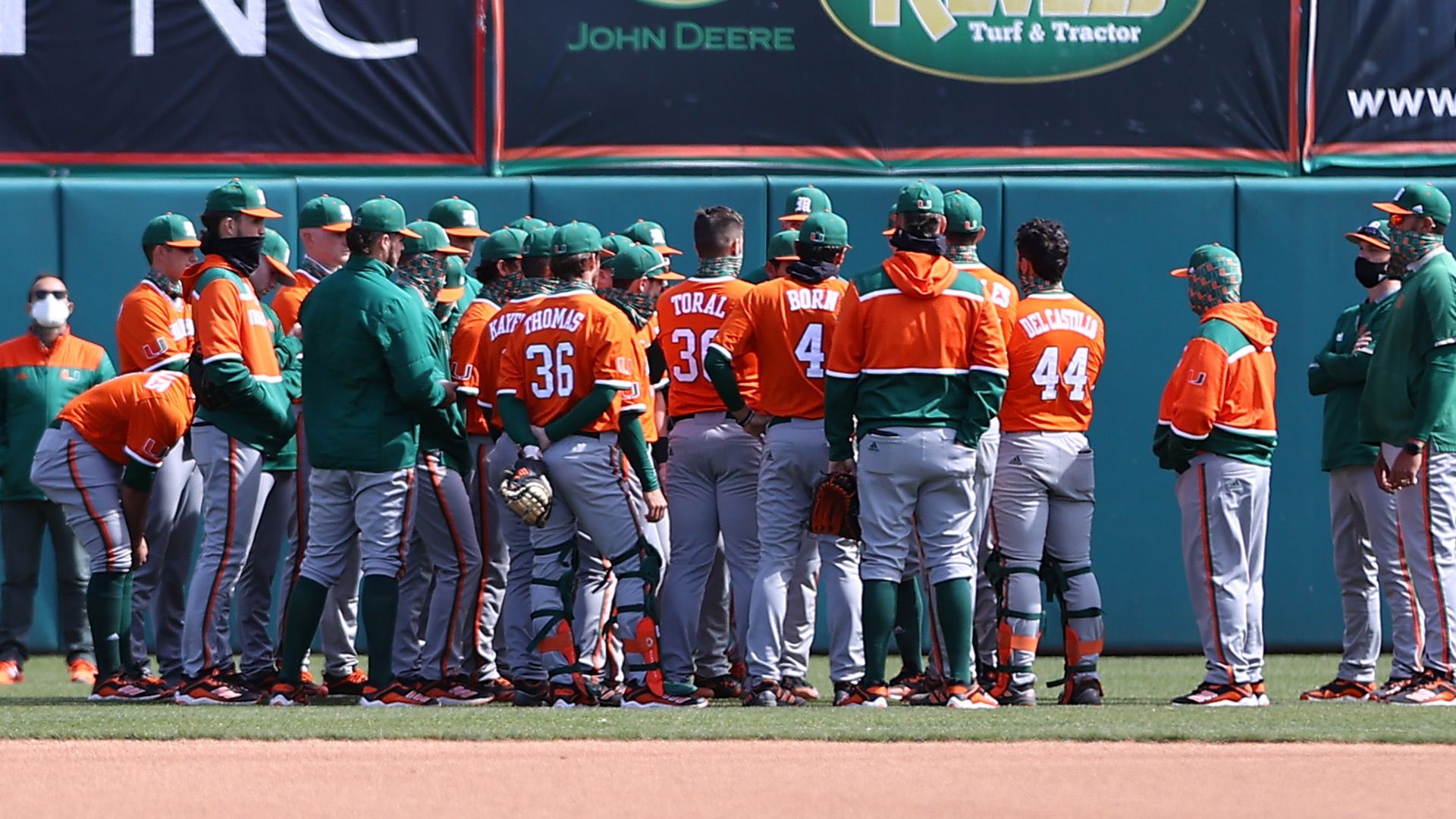 Hurricanes Forge Ahead to FAU

CORAL GABLES, Fla. – There is no hiding from it.

The Canes are not where they want to be after dropping three straight to rival Florida State over the weekend. But Miami’s baseball team knows it cannot wallow in self-pity after a tough series. Instead, the Hurricanes are forging ahead towards a midweek matchup at FAU that will kick off a five-game road swing.

“I’m very concerned, of course. Probably the number one thing would be about the mental status of the team,” head coach Gino DiMare said following Sunday’s game. “Right now, at this very moment, they all should be down and there’s not one person that should be up. And I have no problem with everybody being down a little bit right now because they should be, they should be embarrassed and ashamed. But come Tuesday, we’ve got to make sure that we’re ready to play again because baseball something where you’ve got to bounce back and be ready to go. We will certainly have the rest of this day and tomorrow to get it out of their system and then get ready for at FAU.”

The Hurricanes and Owls have met already this season, with Miami dominating in an 11-2 victory over a then-No. 25 FAU on March 9. But the Canes head into this week off a tough series loss against a rival and that is something infielder Anthony Vilar believes cannot carry over into this week’s games.

“There’s definitely frustration,” Vilar said. “We know we’re a way better team than how we played this weekend. At the end of the day, this weekend’s over. They swept us at our field. The weekend’s over and now we’ve got to look forward to FAU on Tuesday.”

“We’ve just got to flush it,” catcher Adrian Del Castillo added. “Baseball is going to bite you in the butt sometimes and humbles you very quickly, so we’ve just got to look forward to the next game and play hard.”

DiMare and the Hurricanes did not shy away from their disappointment following the rivalry weekend against the Seminoles. But the third-year head coach knows Miami’s future success comes from learning from its past errors.

“Very, very disappointing. Not even sure what to say. It’s the most embarrassing performance I can recall in my days as a Cane,” DiMare said. “We just didn’t do anything right. It seemed like they did everything right. Just a very poor performance, very disappointing. Having said that, we better figure out a way to get it going, because we’ve got a long season ahead of us. And we had been playing well up into this point. But we certainly didn’t do that this weekend.”

A third-year veteran who has started all 93 games in his UM career, Vilar is one of several veterans looking to lead the Canes back to victory and he believes that starts with focusing on what is ahead of them instead of dwelling on the past.

Prior to the weekend, Miami was on a six-game winning streak and the Hurricanes were playing at a high level. After the setback against the Seminoles, Del Castillo believes it is important to clean up their mistakes while remaining positive ahead of the coming games.

“[We cannot] lose our confidence. I feel like this shouldn’t dictate [who we are],” Del Castillo said Sunday. “This is not our whole entire season. It’s only three games. There’s a long way to go. So, we should still have the same confidence, go out there and play and have fun.”

DiMare echoed his team captain’s feelings about working to improve on the Hurricanes’ flaws. The longtime Miami coach also knows getting the right mindset in place will be crucial to getting the Canes back on track.

“It’s one of those things where we’ve got to learn from our mistakes,” DiMare said following Sunday’s game. “But we do have to put this thing behind us because this series can really mess you up and we’re not I’m not going let that happen. The wound is very fresh right now but come Tuesday that thing’s got to be way behind us and we’ve got to get back to playing baseball. This is the most crazy game, in my opinion, in all the sports and it can really screw your mind up if you let it. So, it’s got to be my job to make sure it doesn’t happen.”

With 34 games left to play in the regular season, Miami knows the season will be a grind for every team in the highly competitive ACC. But DiMare knows the importance of getting the team back on a good run to eliminate the negativity from this past weekend.

“Every game is urgent to me, they all matter because they’re all big games,” DiMare said. “It’s going to be a battle. Nobody is going to go 40 and 10 in our conference, I can tell you that. That ain’t gonna happen. It’s going to be a battle with everybody. We’ve got a midweek game coming up. We have played well in our two midweek games so hopefully, we can get back on track with that on the road and then, of course, this weekend in Virginia.”