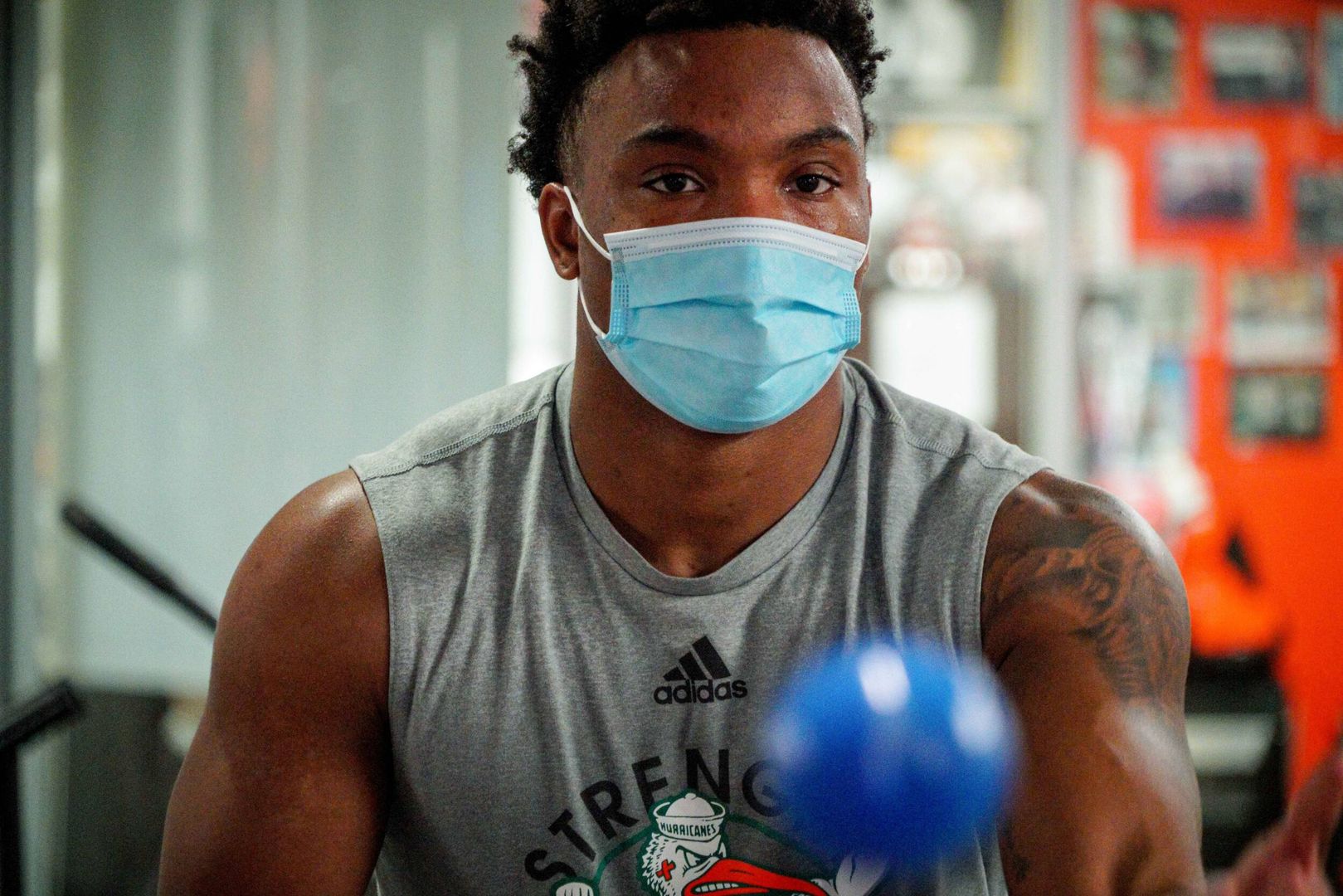 Working His Way Back

CORAL GABLES, Fla. – When doctors gave him his initial diagnosis, he was devastated.

Over the course of the last year, he’d already lost his father, watched his mother battle breast cancer and like so many across South Florida and the world beyond, fought COVID-19 himself.

Now, on the final night of a tumultuous season, D’Eriq King faced another unexpected test: a knee injury that could sideline him for months.

“I told my mom and brother ‘It feels like I’m cursed,’” King said. “That’s how I felt that night.”

That feeling would last all of two days.

Once King returned to Miami after the Hurricanes’ loss to Oklahoma State in the Cheez-It Bowl last December, an MRI confirmed what he, his doctors, family and coaches all feared.

The quarterback – and Miami’s unquestioned leader – had torn the anterior cruciate ligament in his right knee and he’d need surgery and lots of rehabilitative work to get back on the field.

King knew the time for self-pity was over.

“I’d say for like two, three days it was really, really rough. I had decided to come back and I was looking forward to next season and starting us off on the right foot in winter workouts and then just having to go through major surgery like that and rehab, I knew it would take away my offseason,” King said. “But I had to attack it…At the end of the day, there are so many more things in life that are bigger than tearing my ACL. The things some people are going through, especially with COVID, some people can’t eat every day…I’m still blessed. That’s how I had to look at it. That’s how I changed my whole mindset.”

Now, 10 weeks after his surgery and with his teammates returning to Greentree this week for the start of spring practice, King continues pushing forward – with a purpose.

"I had to attack it…There are so many more things in life that are bigger than tearing my ACL. The things some people are going through…I’m still blessed."

The drive he’s showing in his twice-daily physical therapy sessions has surprised no one that knows him well, let alone the teammates and coaches who watched King engineer comeback victories at both NC State and Virginia Tech last fall before he finished the year with 2,686 passing yards and 23 touchdowns, along with 538 rushing yards and four rushing TDs.

“D’Eriq is just doing D’Eriq King things in the training room with his rehab,” Hurricanes head coach Manny Diaz said with a smile. “He’s smashing every benchmark and every goal that they put in front of him, to the point where you almost have to slow him down. But it’s been fun to see him moving around and being with our guys.”

Added Jeff Ruiz, the athletic department’s director of rehabilitation who is working with King, “He’s your ideal patient. He’s an absolute workhorse…The way he attacks everything is absolutely systematic, as if he’s performing a task on the field. He and I go through what we want to try and achieve that day, that week and he makes sure it gets done. He’s just relentless, but he’s always cognizant of the parameters he has to perform within. He’s absolutely an ideal patient. He’s tremendous.”

Given the nature of King’s injury and when it happened, Ruiz says the quarterback is exactly where he needs to be in the rehabilitative process. King is already able to ride a stationary bike, use an elliptical machine and bear weight on his injured leg.

And just as he did in the locker room and on the field last fall, King has helped set the tone in Miami’s physical therapy room where a handful of his teammates – including tight end Will Mallory and defensive tackle Nesta Jade Silvera – are doing their own rehab work this spring.

That’s why Ruiz has jokingly taken to calling King “The General.”

“He’s goes and he leads everybody and he does it by example,” Ruiz said. “He has several other [teammates] that are in there right now with him and to be honest, they’re all doing very good. They’re very far along in their rehabs and I can attribute a lot of their success due to him being there and pushing and leading by example.”

Said Mallory, “Being in there with him, as competitive as he is, as competitive as Nesta is, we’re all pushing to the acceptable limits. It keeps us focused on the task and it’s been a good experience. Unfortunately, last year, with COVID, we didn’t get a whole lot of time to hang out with [King] because he was brand new. Being able to get to know him better as a person has been really fun for me. He’s an incredible dude and building that relationship more and more has been a blessing for me.”

That’s not to say King and his teammates aren’t having a bit of fun during what is a tough time.

Plenty of jokes get cracked and the quarterback is known to ask his teammates how fast they’re going on the elliptical machine before he smiles and tells them he’s going just a smidge faster.

All of that, Mallory says, will make a difference when things are far more intense later.

“Building that level of trust and understanding of what’s important to us, what we want to accomplish, what we want out of the season, building that with him and seeing all the similarities of what we want for this team, I think, has been huge,” Mallory said.

But the training room isn’t the only place where King has been inspiring teammates this spring.

Though he concedes it’s been hard to watch and not participate in practice, King has been a fixture on Greentree through Miami’s first three workouts.

He’s often near offensive coordinator and quarterbacks coach Rhett Lashlee, so the two can discuss what they’re seeing as Miami’s offense works. That, King says, has given him a better understanding of all that goes into coaching, a career he’d like to pursue once his playing days are over.

And King often helps signal in plays during 7-on-7 periods, communicating with fellow quarterbacks Tyler Van Dyke, Peyton Matocha and Ryan Rizk. Later this spring, that group will be joined by freshman Jake Garcia, who arrived in January, but is nursing a foot injury.

All have appreciated the example set by the veteran King. 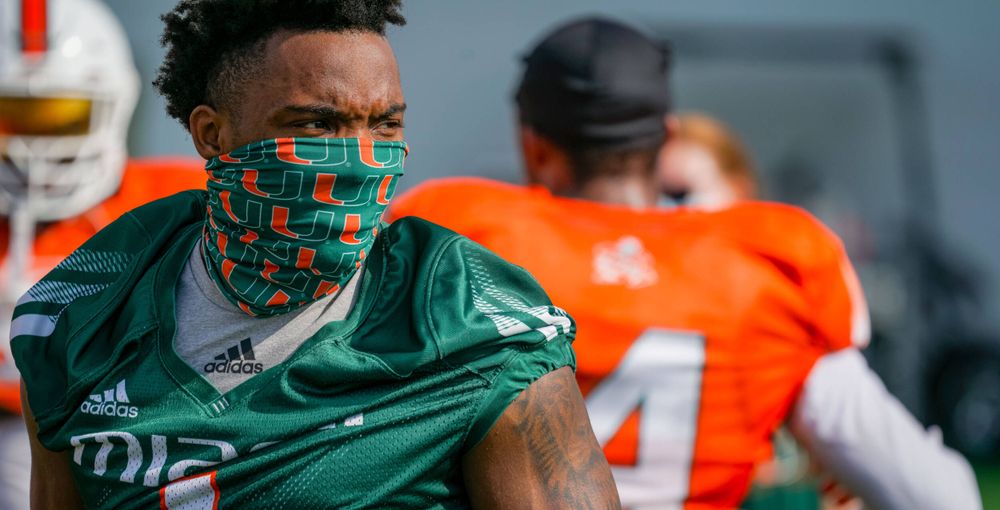 “D’Eriq’s a really calm, relaxed person. He’s very poised on the field, off the field,” Van Dyke said. “He’s a great leader, so I’m really trying to learn from him on his leadership and the way he does his daily routine, what he does around football and just outside of football too. I feel like I’ve learned a lot from him this whole past year. It’s been good.”

Making sure he’s there for his teammates has been as big a priority for King as his rehab work, the quarterback says. With just one year of eligibility left at Miami, he understands he doesn’t have much more time to leave an impression.

But that’s what he’s determined to do – in the training room, in the meeting room and ultimately, on the field.

“I think being there for them is one of the most important things I have to do to leave a legacy here. I want to leave the next guy with as much information as possible. I want him to be successful,” King said. “I don’t want to leave here and have people say ‘He played well’ or ‘He did this or that, but he didn’t leave anything in the quarterback room for those guys to look up to.’ I try to talk to those guys every day. I think we’re all pretty close. They know they can ask me anything and I’m going to answer it truthfully. They know how I am. I think it’s one of the most important things I have to do while I’m here.”