Ready for the Moment: Van Dyke Stepping Up

Chaney – who played a significant role in his first season as a true freshman in 2020 – knows classmate Tyler Van Dyke better than most. So when asked about the second-year quarterback’s playing style, the running back couldn’t hide his excitement.

“Believe it or not guys, TVD can run,” Chaney said Tuesday, pointing at media members on a post-practice Zoom call. “Nobody has seen it yet, but I know he can run. He can run. He’ll get out of the pocket.”

At 6-foot-4 and 225 pounds, the physical attributes of the cool-headed quarterback are not in question.

“I’m a pro-style quarterback, but I can make plays on the run. I can extend plays when the pocket is collapsing,” Van Dyke said . “I can even do some of the zone-read stuff. Maybe not like D’Eriq [King], but if they’re giving it to me, I’ll take it.”

But to head coach Manny Diaz and the Hurricanes coaching staff, the importance of the remaining thirteen spring practices for Van Dyke isn’t entirely based on arm accuracy or scramble ability.

People want follow a leader who does things the right way. That’s what Tyler does. He’s so competitive and he’s so hard-working. I think his natural personality, that’s one of the things I’m looking forward to seeing over the next four and a half weeks, seeing his personality coming out.

“You can see it in our offseason program, our tug-of-war drills, things like that and now the ball aspect will have a chance to come out…I think who he is as a person on the field is still a work in progress, in a good way.”

Diaz pointed to a familiar face in the same position room as a poignant example of the different types of leadership.

“D’Eriq King is not an insanely vocal person,” Diaz said. “You don’t have to be the Hollywood version of the quarterback that gives the speech with the dramatic music playing in the background to be a leader.”

Van Dyke, who committed to the Hurricanes in April of 2019, was rated No. 105 nationally in the ESPN 300, earning the No. 2 pro-style national quarterback ranking. He totaled over 4,600 passing yards and 39 passing touchdowns over his two final varsity seasons at Suffield Academy.

A chaotic 2020 saw the freshman enroll in January and enjoy “four good practices” in spring, according to Van Dyke. Before long, the remainder of spring ball canceled due to the COVID-19 pandemic. Van Dyke found himself on the team’s “unavailability report” due to COVID-19 three times during the fall.

Things are different this spring, as Van Dyke shifts his focus forward with guidance from King. 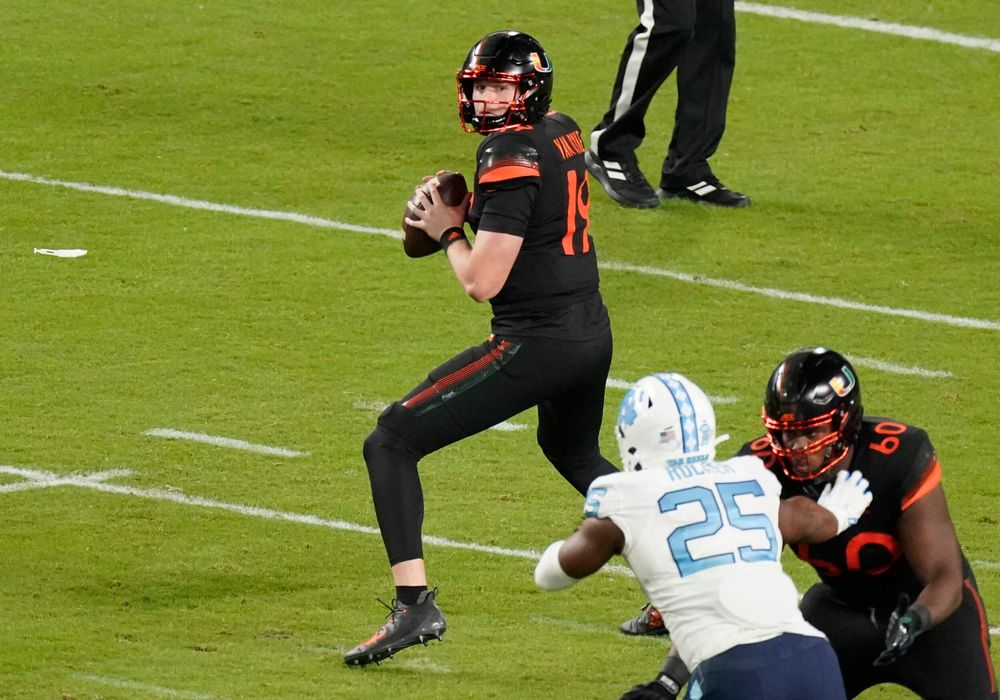 The Glastonbury, Conn., native talked about the role King played in his own development as Year 1 of a student-athlete.

“D’Eriq is a really calm, relaxed person,” Van Dyke said. “He’s very poised on the field and off the field. And he’s a great leader. I’m really trying to learn from him, on his leadership and the way he does his daily routine – around football and outside of football, too.”

Entering his first full spring, and having seen less than a handful of snaps a freshman, Van Dyke said he is excited for the opportunity ahead. With King in the midst of rehab from knee surgery that will force him to miss the spring, Van Dyke knows the potential growth opportunity in front of him.

The talented passer, who switched from No. 19 to his high school jersey No. 9, said he has spent the offseason preparing for this moment.

“After the season, I was 210 pounds Now I’m 225 pounds. I gained six and a half pounds of muscle mass from January until now. I feel good. Mentally, reading defenses and all that, I feel a lot better than I was a year ago.”

Just before the start of spring practice, Diaz was quick to identify Van Dyke as one of the team’s top performers in their accountability program, where the team was split into groups and rewarded points based on punctuality, effort and other intangibles, including football-related activity and non-football related responsibilities.

“We split our team into accountability teams where everything in our program is a competition, including the offseason program and mat drills, you want Tyler on your team,” Diaz said. “The guy scores highly in everything and every way you can measure a person in this program. He’s atop of the charts.”

Van Dyke mentioned two quarterbacks as players he has studied in the offseason to incorporate aspects into his own game; he was impressed with Jared Goff’s ability to move in the pocket and Patrick Mahomes’ skill at check-downs to his receivers.

All of it was about building confidence, Van Dyke said.

“We had a whole point system aside from mat drills,” Van Dyke explained. “Classroom, show up to lifts, lifter of the week…bunch of other things that account for the whole list. I think I was the first one on there. I try to come twice a day to get extra work in, try to watch some extra film. I was trying to get myself physically better.”

Veterans Corey Gaynor and Michael Harley voiced some positive early impressions of Van Dyke after Miami’s first spring practice on Monday. A day later, Chaney recalled a story from a high school camp about the origins of his friendship with the signal caller.

“In the beginning, when we were at one of the camps here, TVD, me, [Xavier Restrepo], we were all at a camp here and we didn’t really say much to each other, but we correlated very, very well,” Chaney said. “They put us in this little 7-on-7 thing and we all coordinated very well.”

That relationship has only blossomed further as the highly touted duo enter Year 2 as Hurricanes.

“We’ve been very, very close. We text almost every day,” Chaney said. “We do a lot of things together. It’s building a bond. All you have to do is really build a bond with TVD and he’ll come out of his comfort zone.”

The ramifications of 2020, both positive and negative, have trickled into spring practice for Diaz and the Hurricanes. With King out for spring, and with the NCAA’s decision to allow an extra year of eligibility for football student-athletes, Van Dyke will be taking a lion’s share of reps at quarterback and throwing to one of 12 scholarship receivers that are currently on the roster.

But to Van Dyke, the spring is about one thing: growth.

“I’m excited to get a lot of reps,” Van Dyke said. “I feel like I didn’t get as many reps as I wanted last year in practice, just because of the whole COVID situation. I’m really excited for the spring. I feel like I’m still learning, but I feel like it’s going to help me gain confidence and be better in the future.”