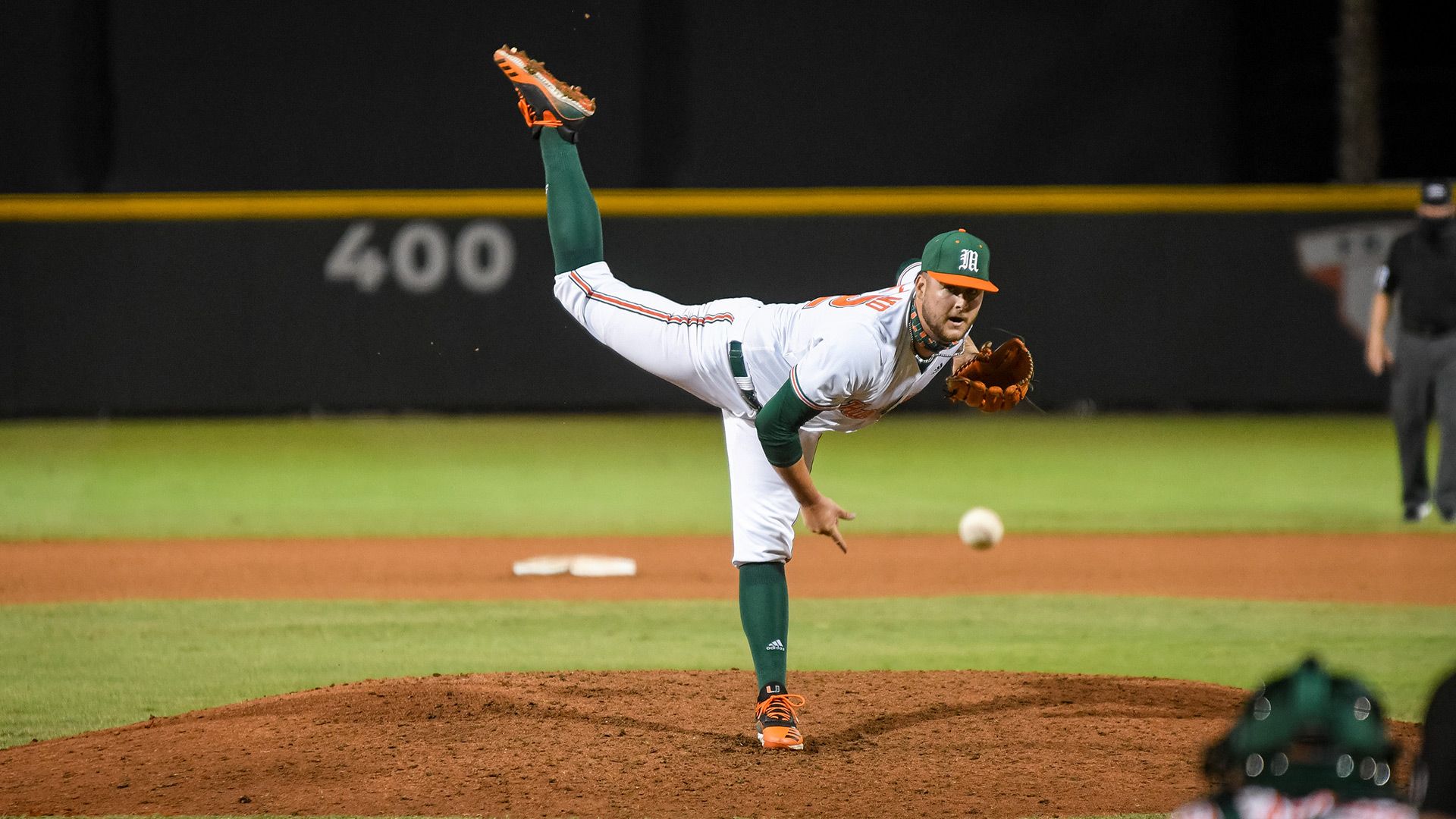 Garland Growing on the Mound

CORAL GABLES, Fla. – It all started in the driveway.

As the youngest of three brothers, Jake Garland learned to compete by playing basketball against his older brothers, Drew and Griffin.

Those basketball games at Garland’s childhood home in Jupiter, Fla., forged an unbreakable bond between the three Garland brothers, even if they didn’t realize it at the time.

“We always have each other’s back, outside of the front yard basketball games,” Garland said. “Those front yard basketball games were something else. It always ended in some sort of fight somehow, but it got us all better. We learn from each other and they would always show me the way to do things. They would always come to my games and give me advice, whether that was on throwing my fastball for strikes more or doing more left-handed layups, they would always show me the right way to do things.”

While Drew and Griffin played college football, it’s Jake that is emerging as a standout on the mound for the Hurricanes and he credits his competitive nature with helping him succeed for the Canes.

“I’ve always had that competitive drive since I was a little kid, especially growing up with two older brothers and I always wanted to be the best out of the three of us,” Garland said. “These are all your teammates and you want to compete with them because that makes us all better, but you’re going to always want what’s best for you, too. Obviously, I want to start and earn a starting spot and eventually move to the weekend rotation.”

“That’s something that you’re born with,” Arteaga said. “I don’t think you can teach competitiveness and that’s not something you can really learn. You kind of bring it out of yourself and it’s definitely been brought out of Jake.”

Competition fuels Garland and the second-year pitcher was battling for a starting rotation spot ahead of the 2021 season. As the start of the season approached, Arteaga and head coach Gino DiMare decided that Garland would not be in the weekend rotation. But the disappointment did not deter Garland. Instead, he was focused on pitching well to earn an opportunity while helping his team win.

“I wanted to be a starter, but I told the coaches, ‘Anything I can do to help, I’ll do. I just want to win,’” Garland said. “So, whether it’s a reliever, starter, or whatever they need me to do, I want to help win. I focused on pitching my best every time they gave me the ball and they said I had that FAU game and now I’ve just got to build off that.”

Last week’s FAU game was Garland’s first career start and the 6-foot-5 pitcher was very impressive. The right-hander held a potent FAU lineup to just one run on three hits over six innings, striking out three batters to earn his first win of the 2021 season.

“It was a great feeling to finally get that first start,” Garland said. “I’ve worked very hard these past couple of years to try and be that guy. Obviously, last year, we had three great pitchers that locked up the rotation. But in this last offseason, I really worked for trying to be a starter and finally getting in that set role is a great feeling.”

While Garland was strong on the mound, he credits his teammates for helping him succeed.

“My success is really behind me in the field,” Garland said. “Without my fielders, I’m nobody and they’ve done a great job behind me. I got a lot of groundballs against FAU, but they were making good plays behind me and I can’t thank them enough. I really just focus on throwing strikes, keeping the ball down and letting my defense make plays behind me.”

Garland has been a key contributor on the mound for the Hurricanes, going 1-0 with a 1.93 ERA in a shortened debut season as a reliever a year ago. It was in that 2020 season where Garland got to learn from one of Miami’s best pitchers and that has proven beneficial.

“He’s a guy that really spent a lot of time with Brian Van Belle last year and I purposely set that up because they’re two guys that are very similar with their stuff, low 90s fastball with some sink, a good changeup and an occasional breaking ball,” Arteaga said. “I saw a lot of similarities with their stuff and Brian had as good a work ethic as anyone I’ve ever had so, I really tried to get those two together.

His debut as a starter was a good one, and Garland will have the opportunity to open another game Wednesday at FGCU. But he will not be thinking about his previous exploits when he takes the mound at 6:30 p.m. against the Eagles.

“You really have got to turn the page after that start,” Garland said. “You can’t sit back and think you’ve made it because you had one good outing. There is another game to be played and another team to prepare for. Obviously, I am happy that I pitched well and helped us win, but I’ve turned the page and moved on to FGCU.”

While Garland is preparing to succeed in each of his starts, he is also working on developing pitches to make his arsenal stronger.

“I’d like to get more consistent with my curveball,” Garland said. “I think earlier on in my career I was pretty consistent with it and since I got here, I’ve kind of gone away from it and focused on other things. I really need to focus on making that a better pitch and possibly an out pitch when I get in an 0-2 count.”

Arteaga would like to see Garland continue his success as a starter and he believes the key to that is consistency.

“You can’t ask for too much more than he did last week. He allowed one hit through six innings, so maybe try to get a couple more innings out of him but really just continue what he’s been doing,” Arteaga said. “When Jake is down in the zone, he’s tough and his pitch count is always going to be down and there are going to be a lot of ground balls. With him, it’s just about consistency. He has to be able to locate because his stuff is just not good enough to get away with too many mistakes. As long as he’s on and he’s throwing the ball where he wants to, he’s going to be successful.”

For Garland, the recipe for success is simple: work hard, do your job and compete your hardest. That was what he carried into his start against FAU, and he will bring that same mindset to the mound inside Swanson Stadium on Wednesday.

“I think that went against FAU was huge,” Garland said. “It was an opportunity for us to get the bats rolling into the weekend and I think we did a great job of carrying that over into the weekend against Wake Forest. If we could do the same thing this week where we play well and get a win against FGCU before going into the FSU series, I think that’d be huge for us going in with a little bit of confidence. I know I am going to do my part and try to give us a chance to win on the mound and hopefully we get the W on the road.”