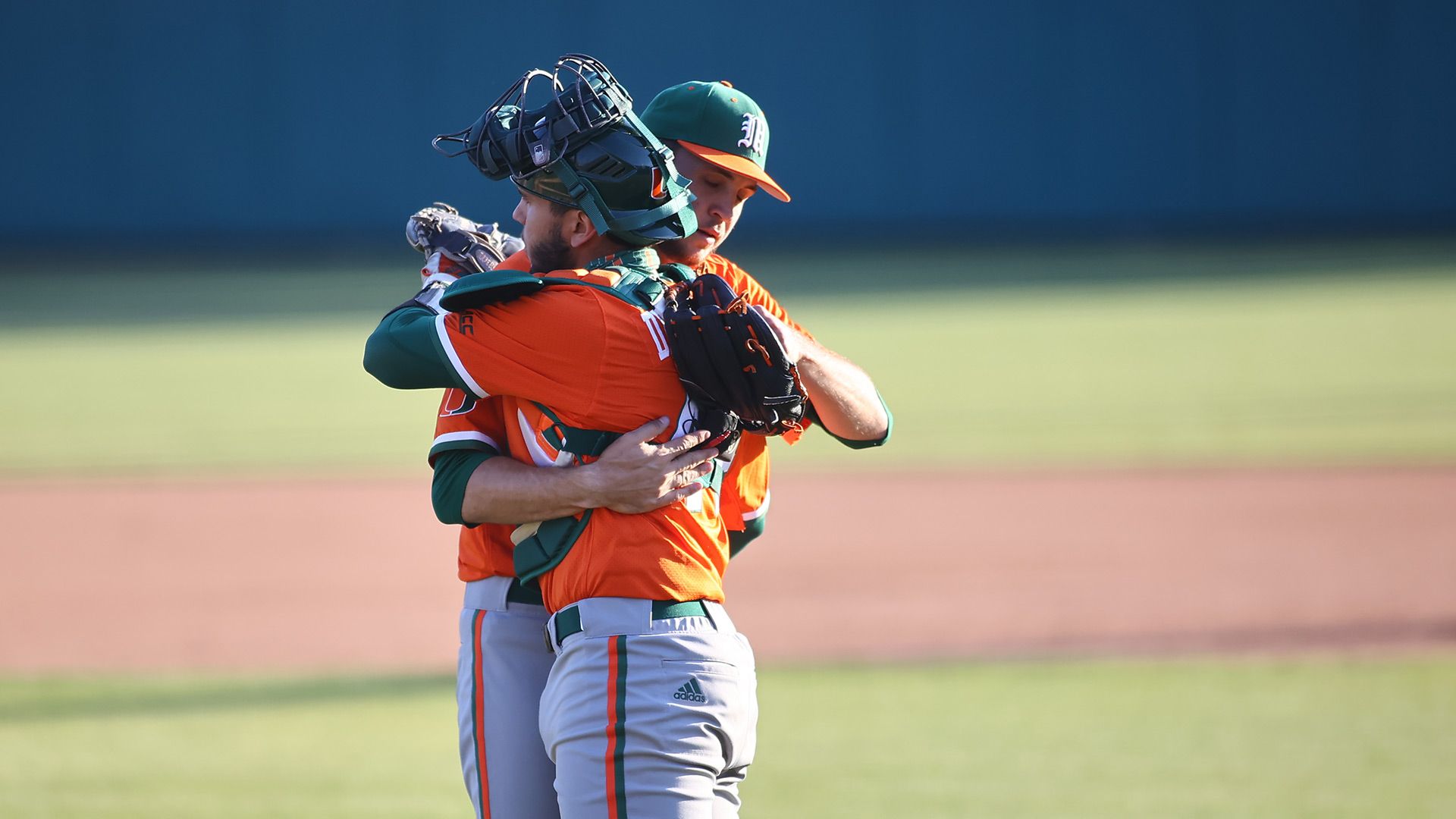 Canes Rally Late to Even Series at NC State

RALEIGH, N.C. – The Miami Hurricanes were in a familiar situation Saturday and a familiar name helped the Canes take the lead for good inside Doak Field at Dail Park.

Christian Del Castillo’s RBI groundout in the top of the eighth gave Miami (4-4, 2-3 ACC) its third and final lead of the day, helping the Hurricanes even the series at NC State (4-5, 1-4 ACC) with a 6-4 victory.

“The season has got so many ups and downs, you’d have to get to the end to see if this is a turning point for us,” head coach Gino DiMare said. “We certainly hope it is in a positive manner because that means the rest of the season is going to go well and we’ve learned and we’ve grown and we’ve matured. Bottom line is it’s one game. It feels a lot better because we played a lot better than yesterday, but we’ve got to be ready to play tomorrow. This means nothing if we come out and don’t play well tomorrow.”

With the game tied at 4, Yohandy Morales led off the top of the eighth with a ground-rule double to right. The true freshman advanced to third on a wild pitch and Miami had runners at the corners when lefty Canaan Smith walked Alex Toral with one out in the inning.

After an incredible play by first baseman Austin Murr to retire Del Castillo, Morales evaded the tag at the plate to snap the stalemate and out Miami ahead, 5-4.

“I was just staying confident up in the box, trying to hit the ball hard,” Del Castillo said. “I was pumped up when I saw Yoyo scored. That was a huge run to get ahead and brought some more energy to the team.”

Miami turned to closer Carson Palmquist to protect the one-run lead and the lefty pitched out of a jam, stranding a pair of base runners after snaring a J.T. Jarrett line drive up the middle to end the eighth.

“I’m just going out there and being confident and believing in myself and the eight other guys on the field with me,” Palmquist said. “It was a huge win for us. We were down bad yesterday and this team battled back We never call it quits and that showed today.”

True freshman CJ Kayfus picked a great time to get his first career hit, smoking a leadoff solo homer to left-center off Wolfpack reliever Dalton Feeney that gave the Hurricanes some breathing room, 6-4, and Palmquist retired the side in order to earn his third save of the season.

“I was trying to stay within myself and let everything happen on its own,” Kayfus said. “I was planning on attacking early on in the at-bat, so I got excited seeing the first pitch fastball. After hitting it I thought, ‘This might have a chance to get out’ and it did.”

Much like Friday’s series opener, Jordan Lala led off the game with a hit-by-pitch and came around to score to get the Hurricanes on the scoreboard in the first inning for the sixth consecutive game. After Lala scored on a Morales groundout, Adrian Del Castillo had an RBI single to right that sent home Anthony Vilar to make it 2-0 in favor of the Hurricanes.

“Yoyo is hitting in an obviously important spot for us there in the three hole,” DiMare said. “That was a big at-bat where he battled and it went to two strikes there and he put the ball in play up the middle, and it not only knocked in the run but it moved the runner over for Del coming up and then he gets the line drive hit. That was great situational hitting, good job by the guys in front of them to get on base. We’ve been great out of the gate in the first inning. I wish we could duplicate the first inning every inning, that’d be great.”

The Wolfpack answered quickly, with Murr doubling down the first base line and Tyler McDonough following with a two-run blast on the third pitch of the game that evened the score at 2 apiece.

But Miami starter Alejandro Rosario settled in after McDonough’s homer, putting up three consecutive zeroes to give the Canes a chance to get its bats going.

“He did that at Florida,” DiMare said of Rosario bouncing back after a tough first inning. “It couldn’t get any worse than in his first outing in Florida, and for him to be able to do that shows that the guy’s got a lot of composure and he’s obviously a very talented guy and he’s a guy that were very, very high on. We have a lot of confidence in him. It was just a changeup that he left it over the plate and the guy got a hold of it. But he pretty much dominated the game for the most part.”

The Hurricanes got their starter some more run support with a two-out rally in the top of the fifth. Freshman Dominic Pitelli started it all with a base hit up the middle, while Lala and Vilar followed with back-to-back RBI doubles to put Miami back ahead, 4-2, and end NC State starter Sam Highfill’s afternoon after 4.2 innings pitched.

NC State scratched a run across with two outs in the bottom of the fifth, as Vojtech Mensik stole second and scored on a base hit to the left side by McDonough that put the Wolfpack within one.

Rosario held NC State to three runs on five hits over five innings, striking out five Wolfpack hitters and walking two before he was replaced on the mound by fellow right-hander Jake Smith in the sixth.

Miami appeared to turn an inning-ending double play in the sixth, but replay review overturned the call as Pitelli appeared off the bag at second when he caught the feed from Vilar. The miscue proved pivotal, as Jarrett ripped a game-tying RBI single to left that pushed home Jonny Butler that squared the score at 4.

Anthony Arguelles pitched a scoreless seventh inning for the Canes, facing just three batters to earn his second win of the season.

“I thought Jake did a solid job,” DiMare said. “He should have gotten out of the inning there. He got the ground ball for a double play. Anthony [Arguelles] did a great job because he’s had a couple iffy outings and that was a great job to come out and do that. That’s what we need from those guys. Let’s see if we can get some consistency. The whole thing in our sport is being consistent, get a consistent team out there that can play every day and be consistent.”

Miami and NC State will close out the weekend series Sunday, beginning at 1 p.m. True freshman Victor Mederos will make his third collegiate start for the Canes opposite NC State right-hander Matt Willadsen.