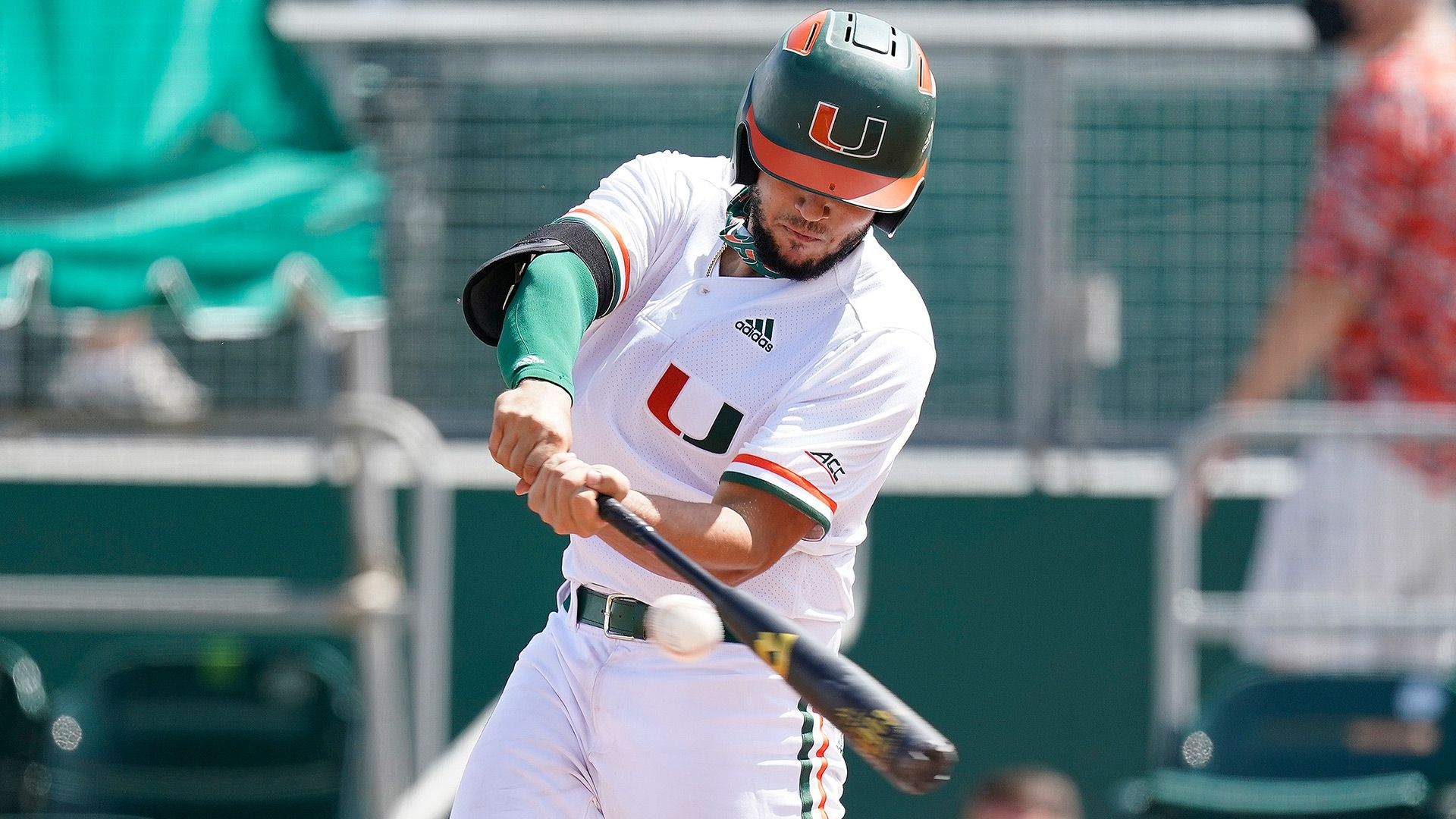 RALEIGH, N.C. – Consistency is a key to success and that is exactly what the Miami Hurricanes are looking to improve on.

The No. 6 Canes (3-3, 1-2 ACC) have been consistently inconsistent over the first two weeks of the 2021 season, taking a series at then-No. 1 Florida and dropping two-of-three in their ACC-opening series against Virginia Tech. Miami will look to be more consistent in all phases of the game beginning with this weekend’s three-game series at NC State.

“Obviously need to turn to page from last weekend, a tough weekend for us,” head coach Gino DiMare said. “We’re still trying to get a feel for ourselves in terms of our team and lineup. We’re only six games into this thing and it’s been interesting, to say the least, just getting prepared for the beginning of the season and not having all the players out there and you start to realize that, ‘Oh my gosh, we just don’t have a feel yet for our identity as a team,’ whether it’s the bullpen or the lineup.

“We’re going into NC State, who got swept by Georgia Tech, so obviously they’re going to be pretty fired up to bounce back and we should be as well because we certainly were looking to win the series against Virginia Tech and it didn’t happen,” DiMare added. “A lot of things didn’t go right for us in that series and we’ve got to get ourselves going here because it’s going to start picking up now. We’re going to start playing four games a week for the next seven weeks and it’s going to fly by, all those midweek games along with all ACC opponents. We’ve got to start getting going and playing better baseball, consistent baseball. We’re fortunate that we’re ranked pretty well in a lot of the polls, but we’re not playing like that right now. We’re not playing like a top-10 team. We need to start playing better.”

"We're disappointed about this past week and obviously anytime you lose a game, you're upset, but it's in the past. We're excited to get back on track and go back to war.”

Miami boasts one of the most talented offenses in the country, with preseason All-Americans Adrian Del Castillo and Alex Toral headlining a group that has proven to be potent at the plate. But the Canes have had uneven results thus far, batting just .239 as a team while stranding 56 runners over their first six games.

“We need to be consistent. I want to get a lineup that we can put out there that’s consistent,” DiMare said. “It might be different with a lefty or righty, but we’ve been kind of bouncing around more so just different guys playing different positions and I want some consistency. It’s hard to play, let’s say shortstop when you’re playing one day at short and two days at third or two days at short and one day a third. I’m just using that as an example, but there are some other positions too that we’ve kind of bounced around.

“I told the guys we need our veteran guys to get it going,” DiMare continued. “Again, it’s only six games, but we don’t need to be hitting .230-something or whatever we’re hitting as a team right now. We need to start swinging the bat better. Our identity as a lineup should be we’re driving the ball, we should be a team that hits the ball for power, extra-base hits, knocking guys in and we haven’t done that. We only had one extra-base hit the entire weekend against Virginia Tech and that was the fly ball and carried out by Yoyo Morales on Sunday. So, our veteran guys know they need to get it going and they seem very confident that they will. We’ve just got to get that consistency. When guys start playing better and more consistent, you’re going to see a consistent lineup. Until then, I’m just trying to find my way too and try to put the best matchups that I think would be the best fit against certain pitchers.”

The Canes have adjusted their methodology all week in practice, with hitting coach Norberto Lopez emphasizing an aggressive approach at the plate that Miami hopes will be effective against Wolfpack pitchers.

“We’ve been working a lot on situational hitting and I think that’s kind of put us in a little defensive mode,” outfielder Jordan Lala said. “This past week, coach Lopes told us to relax and start driving the baseball and we’ve been starting to crank baseballs here and there.”

“What we’ve worked on is really just freeing the guys up swinging the bat,” DiMare added. “We’ve got to cut the bat loose, man. We’re not driving the ball so I think we put a big emphasis on attacking, being aggressive in the strike zone early in the count, stop being defensive, getting into good counts because so many times we’re behind the count with two strikes and being defensive. You’ve got to hit the two strikes but, man, let’s look to be aggressive and drive the ball because that is one of our strengths. We’ve got a number of guys in the lineup who can hit the ball with authority and we need to do that so we have emphasized that.”

Del Castillo enters the weekend batting .320, but the third-year hitting machine has just a pair of extra-base hits and five RBI on the year after being one of the top run producers in the country over the previous two seasons. Arguably the best hitter in college baseball, Del Castillo feels like he is about to break out at the plate and hit like he always has.

While Miami’s catcher has earned numerous accolades ahead of the 2021 season, his older brother has been one of the Canes’ most consistent hitters over the opening two weeks. Christian Del Castillo’s .333 batting average ranks second on the team and his eight RBI pace all Miami batters, but he is striving for more as he makes his first trip to NC State as a Hurricane.

“I’m feeling great,” Christian said. “Obviously, it doesn’t matter how I perform; There’s always room to improve, you can always do better, you can always get better at everything. Whether it be contact or power or running or anything in baseball, you can always improve how well you do it. I feel like I’m playing to the best of my ability, but I’m always pushing myself harder and harder to become better in every aspect.”

DiMare has been impressed with the elder Del Castillo’s play thus far and hopes he will be a spark for the other Canes in the lineup.

“He’s brought a lot of energy to the team,” DiMare said. “He doesn’t say a lot, he’s a very quiet guy, but how he plays is very energetic; he plays with a lot of passion. I think that players can feed off of that and he’s one of those guys that gets a lot of respect from his teammates because he doesn’t say anything, he never complains, he never whines, he’s always working hard and he’s clutch. He comes through clutch in a lot of scenarios and players respect guys like that on the team. Those are the guys they’re counting on like, ‘oh my gosh, he’s going to be the guy that comes through for us’ because he’s done that.”

As Miami’s leading RBI man, Del Castillo has delivered in big moments throughout the young season. The fifth-year outfielder credits his approach at the plate for his ability to step up when his team needs him most.

“I’m just keeping it simple, as simple as possible, especially with hitting,” Christian said. “You can’t overcomplicate yourself hitting. When I’m out there, I just think, ‘I’m a warrior, I’m a champion, he’s not getting me out.’ Just that type of mindset where I’m going to come out winning this battle, this fight, and just keeping it simple, just seeing the ball and driving the ball wherever it’s thrown. Just keep it as simple as possible.”

Miami’s bats are confident they are about to get red-hot at the plate, as Lala believes the offense is ready to get rolling as it has in the past.

“We know what we can do up there at the plate and we’re definitely not swinging the bats how we want to and we know we’re capable of much more,” Lala said. “I think we’re just trying to do too much up there. At some point, we’re going to have to relax and be confident in ourselves and start swinging the bat the way we know we can.”

While the bats are looking to get hot, Miami’s pitchers will look to silence an NC State offense that scored 14 runs in a midweek victory over Campbell on Tuesday. Friday night starter Daniel Federman will get the first opportunity against the Wolfpack and he is eager to hit the mound after retiring the final nine batters he faced against Virginia Tech last week.

“We’re not playing good baseball right now, it’s as simple that,” Federman said. “But we had a good week of practice and we’re ready to get after it on Friday and I’m going to set the tone.”

Federman is 0-2 with a 7.84 ERA, but DiMare believes the fourth-year right-hander has pitched better than his statistics show. Like with the offense, he wants to see consistency out of Federman and the rest of the pitchers as the season goes on.

“Fed’s been great,” DiMare said. “I know he had the two hiccup innings there against Virginia Tech, but you look at his line from both games, the line maybe didn’t look so good but I thought he threw better than what the lines showed. But look, if you’re going to be a Friday night guy in the ACC, you can’t afford to have hiccups — even one big hiccup where they score say three or four runs in one inning. You’ve got to minimize and you’ve got to quiet that down and not allow for an inning or two innings [to get away from you] because the other Friday guy is really good, too. Getting runs is a premium so those are the things that we’re hoping that Fed can just [improve]. He’s close, he’s close. I’m still happy with how he’s throwing. We’ve just got to clean up an inning or two here and there.”

Federman believes all of Miami’s pitchers are hungry for a chance to avenge their struggles in Sunday’s loss to Virginia Tech, where the Canes allowed nine runs in the decisive final game of the series.

“Baseball is an emotional roller coaster,” Federman said. “We’ve played six games, we haven’t played baseball in a year, we have a lot of guys still trying to figure out solid roles in the lineup and whatnot. But we’re going out there just the same as always, the same as after we beat Florida, the same as last season, it’s all the same thing. We’re just trying to stay consistent, get better every day, and take care of business.”

Del Castillo knows the offense is looking forward instead of dwelling on the recent past. After a good week of practice, he believes the Hurricanes will shine in their first ACC road series of the season.

“The past is the past. We can’t control that anymore, so we have to forget about that and bear down on the mistakes that we did and stay aggressive,” Christian said. “It doesn’t matter what happened in the past, but we have to move on and bring energy, play as a team, figure out how we can get more runs across the board but staying aggressive I think is definitely the key for that.”

The series, which begins Friday at 3 p.m., is Miami’s first chance to be more consistent and the Hurricanes are eager for the opportunity to get back on the field and earn some victories.