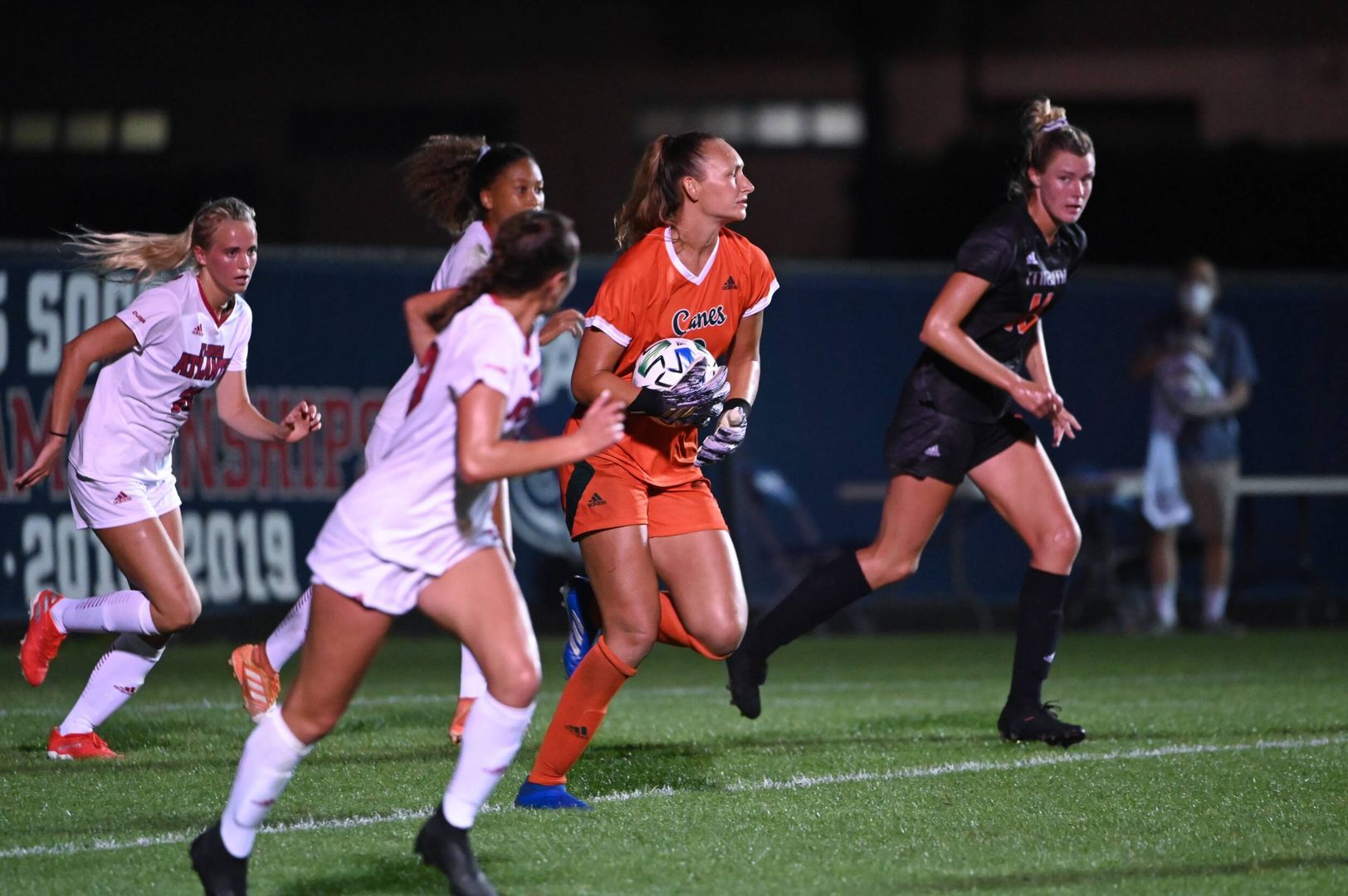 Soccer Comes up Short at FAU

BOCA RATON, Fla. – The University of Miami soccer team closed out the 2020-21 road season Sunday night at Florida Atlantic, where a late tally made the difference in a back and forth 1-0 defeat.

“The outcome is disappointing because we created clear chances early,” Miami head coach Sarah Barnes said. “We remain focused on the process of helping our young team continue to take steps forward this spring as we prepare for the fall. I like how they’re competing. Over the next two weeks, we’ll be looking for improvement in execution, composure in the attacking third, and awareness of what the defense is giving us. Those were key in tonight’s game and have to be the focus for every player.”

Just four minutes into the contest, the Hurricanes looked to take an early lead when redshirt freshman midfielder Jackie Koerwitz found Maria Jakobsdottir making a run into the box. However, the sophomore midfielder’s attempt missed just wide of the net.

On the defensive side of the ball, sophomore defender Emma Tucker made a key defensive stop at the eight-minute mark, blocking a shot by Maddison Krstec heading toward the net.

Nine minutes later, Koerwitz sent a blast on goal, but Cassidy Wasdin was in position to make the save.

Sophomore goalkeeper Melissa Dagenais was tested throughout the match, however her lone recorded save came in the 24th minute off the foot of Emma Grissom.

Three minutes later, freshman midfielder Michaela Baker received an opportunity to put the Canes in front, but once again Wasdin was up for the challenge.

After stepping onto the back line for the first time as a collegian a week ago, Gabi Rusek once again played the full 90 minutes at the center back position. In the 29th minute, the freshman made back-to-back outstanding plays, first getting her right leg in front of a FAU shot at the six-yard box, before stopping the rebound attempt.

Overall, the defensive half by both sides came to an end with neither team able to register a tally.

Out of the break, freshman midfielder Mia Atrio collected Miami’s third shot on goal when she got her head on a cross and sent the ball near the top of the frame. However, Wasdin was able to get a hand on the ball and keep the match scoreless.

In the 78th minute, the Owls took a lead they would not look back on when Miracle Porter found herself one-on-one with Dagenais, before sneaking it past the sophomore.

Up next, the Hurricanes will welcome the FIU Panthers to Cobb Stadium, Miami’s first of two home matches in the spring.