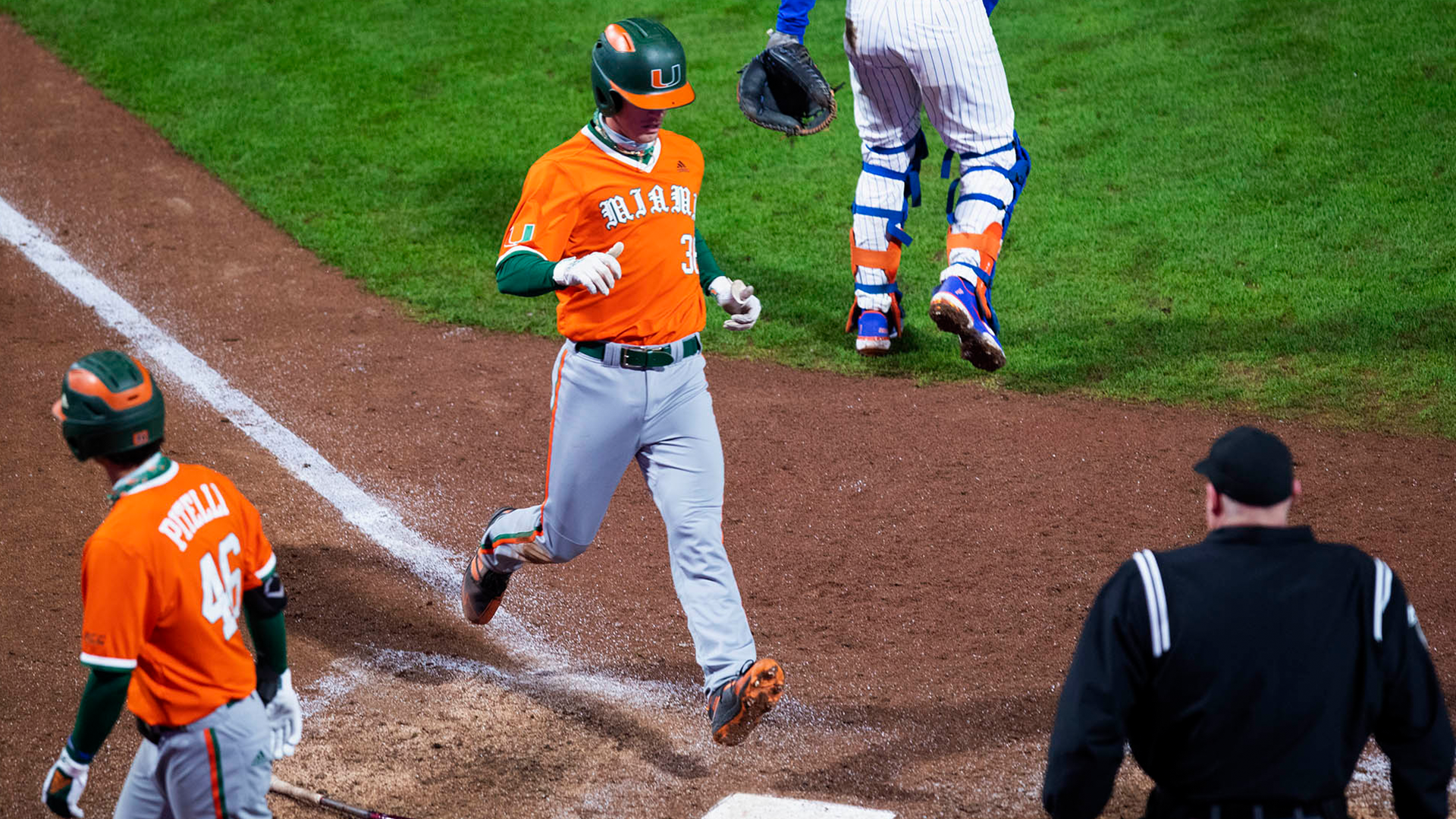 GAINESVILLE, Fla. – The Miami Hurricanes never quit, but ran out of outs in Friday’s season opener at No. 1 Florida.

The No. 11 Canes rallied in the ninth inning of their first game in 345 days but could not make up a six-run deficit, falling 7-5 in the inaugural game at Florida Ballpark Friday night.

With the top-ranked Gators leading, 7-1, heading into the ninth inning, Miami built some momentum against freshman reliever Chase Centala.

The Hurricanes loaded the bases on a base hit by freshman Yohandy Morales, who had a multi-hit game and scored two runs in his UM debut, and walks from Alex Toral and Jared Thomas. Right-hander Ben Sprecht relieved Centala and Christian Del Castillo hit a two-run double off the wall in right field that brought the Canes within four runs. The double was Del Castillo’s second hit of the night, as the graduate transfer finished with a team-high three RBI.

The Canes added another run when Tony Jenkins hit a sacrifice fly to center that sent home Thomas to make it 7-4 in favor of the Gators. Freshman shortstop Dominic Pitelli singled to left, joining Morales and Del Castillo with multi-hit games in their Miami debuts, and Florida replaced Specht on the mound with right-hander Franco Aleman.

Pinch hitter JP Gates drove home Del Castillo with a sacrifice fly to left that brought the tying run to the plate with two outs in the ninth. Anthony Vilar flew out to center and the Gators held on to take the season opener over Miami. With the loss Friday, the Hurricanes fell in a season opener for the first time since 2007 against Mercer.

While Miami’s bats came to life late, it was Florida’s offense that struck first on Friday night. Catcher Nathan Hickey hit the first pitch he saw from Miami starter Daniel Federman just over the right field wall to put the Gators ahead, 1-0.

Morales, who started at third base for Miami, picked up the first hit of his career and Miami’s first hit of the season when he led off the top of the second with a double to right-center off Florida starter Tommy Mace. Three batters later, Christian Del Castillo singled through the right side for an RBI base hit that pushed home Morales to even the score at 1 apiece.

A passed ball that got by Hickey moved Toral, who walked, and Del Castillo to second and third, respectively, with just one out. Jenkins hit a shallow fly ball to right and Miami tried to score with both runners tagging up. The throw from Kendrick Calilao was cut near the pitcher’s mound and relayed to third base, where Del Castillo was tagged out before Toral crossed home plate and the potential go-ahead run did not score.

SEC Network broadcasters Tom Hart and Kyle Peterson felt replay review would overturn the call, but home plate umpire Scott Kennedy ruled that the call would stand and the game stayed tied at 1.

Miami loaded the bases with one out in the third, but Morales laced a line drive to right that was hit so hard that Pitelli could not tag from third base. Toral worked a full count before taking a called third strike and Mace and the Gators got out of the jam unscathed.

Florida threatened in the bottom of fourth, putting runners on first and third with one out. But Federman induced an inning-ending 4-6-3 double play off the bat of Kris Armstrong to maintain the stalemate through four frames.

The Gators offense opened the bottom of the fifth with back-to-back base hits and took a 2-1 lead on a one-out, seeing-eye RBI single thru the right side by Jacob Young that drove in Josh Rivera. Jud Fabian followed with a walk to load the bases for Hickey. The Florida catcher hit a ground-rule double that just barely hit the right field foul line, driving in two runs to double the Gators’ total score.

Second-year right-hander Jake Garland replaced Federman on the mound with one out in the fifth and ended the rally with a strikeout and groundout. Federman finished the night allowing four runs on seven hits and tied a career-best seven strikeouts over 4 1/3 innings pitched.

With a three-run lead and four innings to go, Florida turned to its bullpen. Right-hander Christian Scott relieved Mace after the Gators’ starter held the Hurricanes to one run on three hits over five innings while striking out eight.

Florida added a run in the sixth, as Josh Rivera hit a one-out triple to right-center and scored on an RBI single by Calilao.

The Gators tacked on two more runs in the eighth when Armstrong hit a two-run homer off Garland to give Florida a 7-1 advantage and cap the UF scoring for the night.