FORT MYERS, Fla. – Playing in its first match since Nov. 1, the University of Miami soccer team battled with FGCU for 110 minutes resulting in a 1-1 draw Wednesday night at the FGCU Soccer Complex. 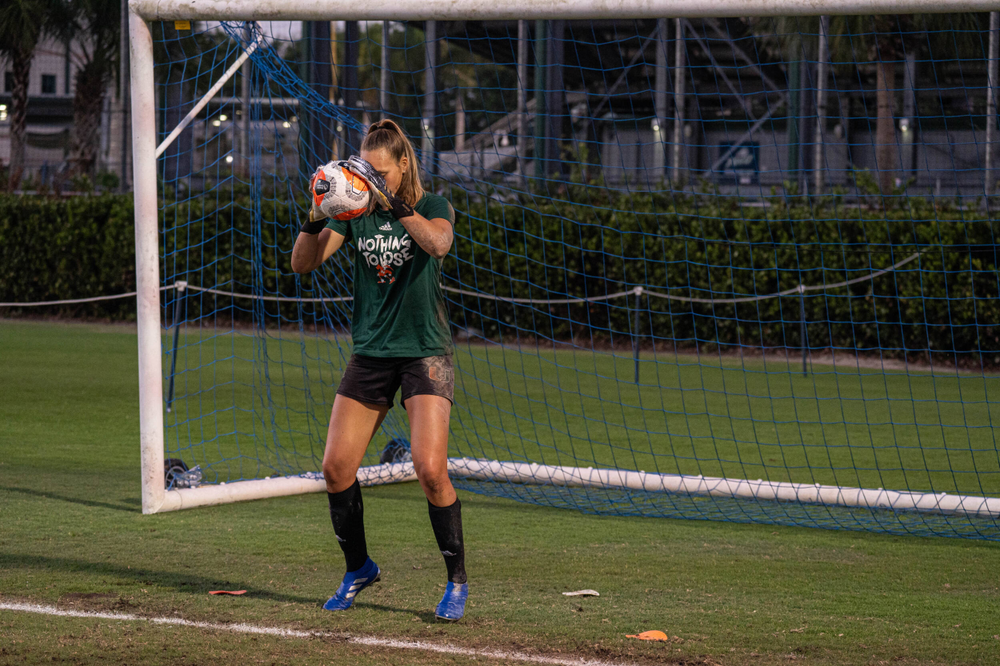 “I think, for it being our first game in three and a half months, there was definitely a lot of fight and competitiveness tonight,” Miami head coach Sarah Barnes said. “I think FGCU has a very good group and is always dangerous. I thought our team battled for 110 minutes.

“I was excited to see how well our young players competed, especially with many of them playing in new positions for the first time and do very well,” Barnes continued. “There is certainly a lot we can take away from this match and learn from. There are some important growth moments that we have to improve upon for our next game, but I also think there are a number of positives that we can take away from this game with. Ultimately, we were happy to be out here and to have the opportunity to compete, and I definitely believe we took a step forward in our development.”

Competing in her first match of the 2020-21 campaign, sophomore midfielder Maria Jakobsdottir collected Miami’s first shot on goal of the spring. However, FGCU’s goalkeeper Mia Krusinski was able to make the save just 2:30 in to the contest.

Continuing to apply the pressure, freshman defender Delaney Brown registered another shot on goal for the Hurricanes, but once again Krusinski was up for the challenge.

In the 29th minute, freshman midfielder Michaela Baker found the ball at her foot on the far right sideline and located redshirt freshman Jackie Koerwitz crashing into the box.

In similar fashion to the fall finale against fifth-ranked Duke, the 6-foot-1 midfielder buried home Baker’s cross to give the road team the early 1-0 advantage.

Overall, the Hurricanes carried the lead into the intermission, while holding a 3-2 advantage in shots on goal.

Out of the break, Dagenais and the young Miami defensive line were tested but continued to fend off multiple attacks by the Eagles.

Sophomores Emma Tucker and Taylor Shell, as well as freshmen Brown and Gabriela Rusek, playing her first collegiate match at center back, stepped up alongside Dagenais, as the quintet of underclassmen faced 17 shots over the final 65 minutes.

However, with just under 10 minutes remaining in regulation, the Eagles evened the match at 1-1 when Louise Lillback found the back of the net.

Over the final 20 minutes, both the Hurricanes and Eagles each tried to earn the golden goal, but neither defense would break.

Up next, the Hurricanes will hit the road on Feb. 28 to face the Florida Atlantic Owls in Boca Raton, Fla., at 7 p.m.