It seemed simple and straightforward enough when Miami head coach Manny Diaz uttered those two words at the end of Wednesday’s media availability. But the ninth-ranked Hurricanes know winning a football game is never easy and that challenge is even greater after two weeks off from playing.

“This team has to have a great sense of, ‘Hey, we’ll come into today and figure out what today is all about because we know by tomorrow it may change again,’” Diaz said Monday following the team’s first practice after the two-week layoff. “We did have some meetings this morning and just talking to some of the assistant coaches in the meetings I was in, I think the kids are very excited to be back. They want to play. It always reminds me of when we got back together again in the summertime. These kids want to play; they want to finish the season.

“You don’t even know with what we’ve been through and what we see going on across the country, so the fact that us and Duke are able to play Saturday, … I think shows two things,” Diaz added. “I think one it’s the ability to adjust to whatever presents, but two to be thankful this year for what we have because it’s not promised to us.” 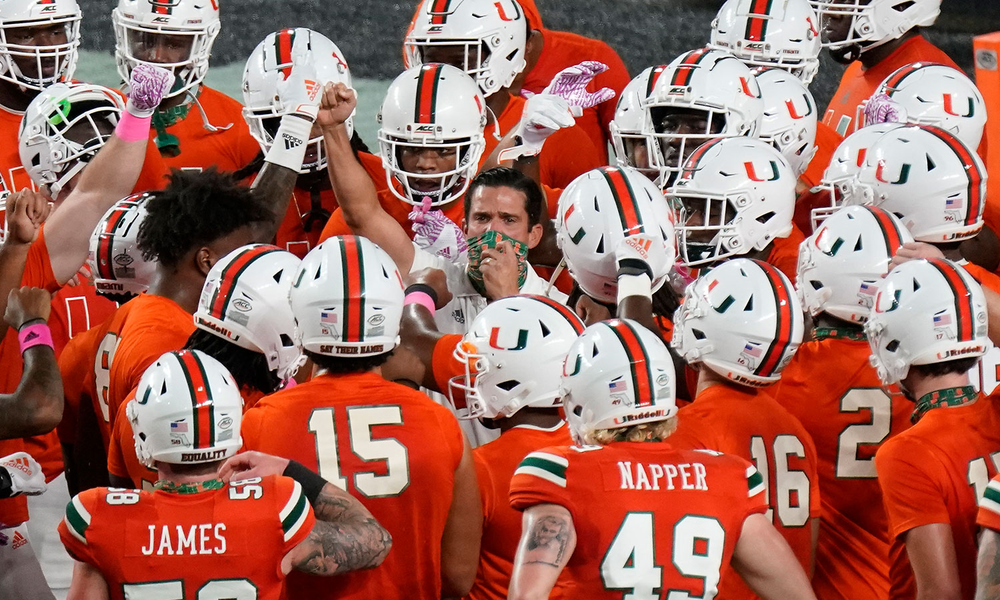 Miami’s football program went through a whirlwind since it earned a 25-24 victory at Virginia Tech on Nov. 14.

Two games were postponed and three were rescheduled, as the Hurricanes focused on getting healthy following the positive tests and subsequent quarantining of student-athletes within the program. Then, as the team was about to return to action against Wake Forest, Miami was left without an opponent for Dec. 5 when the Demon Deacons had their own COVID-19 situation to handle.

Clarity finally came on Sunday night, as Miami learned it would indeed have an opponent to face this Saturday and the preparation began in earnest as the Canes focused on a return to action.

“We didn’t really know Duke was going to be our opponent until last night,” Diaz said Monday. “There’s certainly some familiarity with our defense and their offense. With our offense being new, our coaches on that side of the ball don’t have that same familiarity you’re talking about, so they’re kind of figuring out who Duke is for the first time this year today.”

In addition to putting together a gameplan on the fly, Miami’s coaches needed to get their players ready to compete after an extended layoff that included little physical activity before this week.

“I think the schematic part is just one challenge. I think the greater challenge is – and I think Duke and Georgia Tech went through this past week is the long layoff – not being able to practice over the last couple of weeks,” Diaz said. “Just getting our guys back into football shape, back into contact. I think there’s a lot of things that are very unusual about our team at this point. It’s got to be a very focused week. The players have to understand the adversity of the difference in preparation for this game than maybe any other game that they’ll ever play or that I’ve been a part of.”

Despite all of the adversity they have faced, the Hurricanes are excited to be back at practice and preparing for this week’s 8 p.m. kickoff at Duke.

“Being off for two weeks makes you miss football and want to focus on football,” quarterback D’Eriq King said. “I would do anything to play another college football game and I am excited to get back out there this Saturday.”

The Hurricanes and Blue Devils are set to meet for the18th time in the series, which Miami leads, 13-4, including a 7-2 edge in games in Durham, N.C. The Coastal foes have met every year since 2005 and Miami has won 12 of the 15 head-to-head games since the Hurricanes joined the ACC in 2004. In last year’s matchup – also at Wallace Wade Stadium – Duke emerged with a 27-17 victory. The Hurricanes have dropped two straight to Duke.

While Miami is 3-1 on the road in 2020, this week’s game will be the first the Hurricanes play without fans in the stands. The empty stadium could bring a different feel for the visiting Canes, but Diaz is confident his team will come ready to play regardless of the attendance or lack thereof.

“You definitely have to bring your own energy, bring your own juice when you’re playing on the road or at home,” Diaz said. “We’ve had some unique environments when we’ve played. We felt like when we went to Clemson, for example, I don’t know how many they had in there, but you still felt the crowd there. I thought NC State did a good too, and Louisville. It’s just a little different every week.”

“Being off for two weeks makes you miss football and want to focus on football. I would do anything to play another college football game and I am excited to get back out there this Saturday.”

Diaz and the rest of Miami’s coaches expect the Canes to be a bit rusty after a two-week pause to their season. Because of the break, the UM coaches have placed an emphasis on four key areas they believe will be crucial to the Hurricanes’ success at Wallace Wade Stadium on Saturday night.

“The only thing that is in any way similar is the bowl game where you have a long layoff, but it’s not a bowl game because you haven’t had your normal week of bowl practices like you would normally have,” Diaz said. “So for me, the things that stick out are number one tackling — you haven’t tackled in a long time. Conditioning, I think that football shape conditioning, which we tried to do with what we’ve been able to do over the last couple of weeks. We’ve tried to manage it any way we can. Special teams just because of disruption on the depth chart or just again the timing of special teams that you normally see in openers and bowl games that are always really important. And then turnovers and I think you saw all of this in the Duke-Georgia Tech game on Saturday night.”

Because of the extended time off, Miami’s coaches have focused on fundamentals in practice all week with the hopes of getting their team ready for a game for the first time in nearly a month.

“I keep saying we have to stop acting like things – they’re not normal,” Diaz added. “These games are not normal due to the preparation and when you take three weeks off, the ball is not being attacked, so things like turnovers, ball security, as I mentioned with the tackling and conditioning. I think those are the things you really double down on. So, I think the real answer is you try as hard as you can to double down fundamentally to make yourself hard to beat and hope that the scheme will look better if the fundamentals are better.” 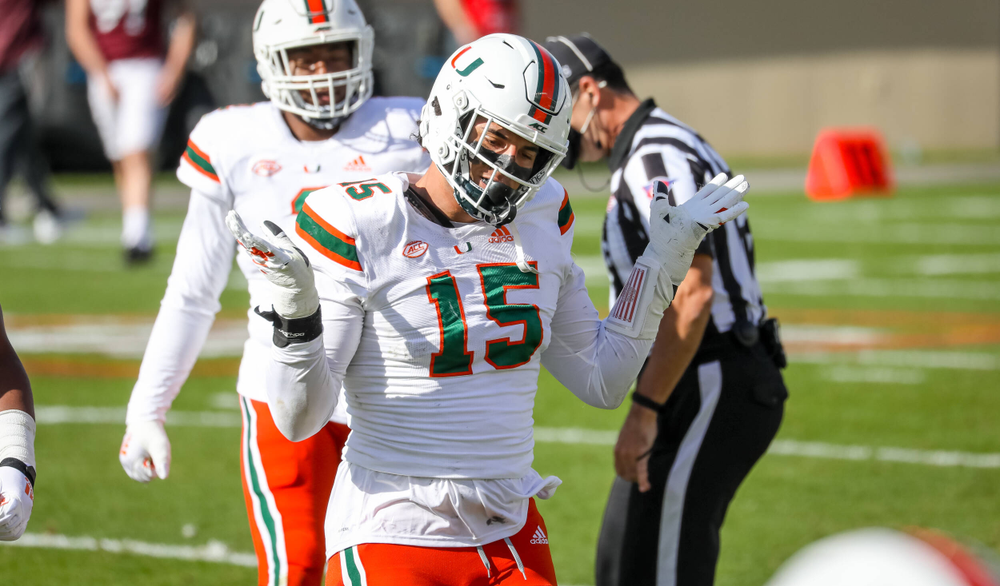 Defensive end Jaelan Phillips is eager to get back on the field after the extended pause to Miami's season.

The Blue Devils are averaging 26 points and 400 yards of offense per game and they will look to challenge a Miami defense that has not had to make a tackle in nearly three weeks. Running backs Mataeo Durant and Deonte Jackson have combined for 1,266 yards and 11 touchdowns on 235 carries, while quarterback Chase Brice has thrown for 1,995 yards, with nine touchdowns and 13 interceptions.

“The only goal that we have is to just week-by-week, win the game that’s ahead of us and that’s kind of what we’ve been doing all season,” defensive end Jaelan Phillips said. “This downtime has really just made us hungrier and we’re just ready to finish the season off the best that we can.”

While Phillips will look to lead a gifted Miami defensive front, Duke’s top defenders are also on the line. The Blue Devils are paced on defense by ends Victor Dimujeke (8.5 tackles for loss, 7.5 sacks) and Chris Rumph (12.5 tackles for loss, eight sacks).

UM offensive line coach Garin Justice has seen improved line play in both the running and passing games throughout the season, but he hopes to see more consistent play across the board as the Hurricanes head down the final stretch of their schedule.

“Overall, from where we have been, I think we have improved in both from last year, but the thing that still needs to take off is the run game,” Justice said. “We have been able to run at times, situationally. You look back at the Pitt game and we had the ball all but three minutes of the Pitt game because we were able to run the ball and keep it out of Pitt’s hands. You look at the NC State game and we were able to ice the game and run the ball. There have been times where we have shown flashes, but we are not as consistent as we need to be in either phase.”

"We do have a special team and this team wants to finish what it has started."

A victory on Saturday would elevate the Hurricanes to 8-1 on the season, with a 7-1 league record. With a top-10 ranking and the potential for a 10-win regular season, the Canes are in position for a major bowl bid. But Diaz refuses to let the potential reward for success affect the execution that makes a team successful.

“Any time you start looking ahead, you get in trouble,” Diaz said. “We know that we have a game to play and that gives us an opportunity to have a really good record going into our next game…all of these games are not promised to us. We do have a special team and this team wants to finish what it has started. We are in the mix and who knows what can happen in the next few weeks, this could be a ‘last man standing’ operation.”

Miami’s veteran leaders echoed their coach’s sentiments, showing the players understand that focusing on Saturday night’s contest is the only way to achieve the big goals they aspire to reach at the end of the year.

“We get the opportunity to finally come out, have fun, practice and prep for Duke,” receiver Mike Harley said. “We’re back on the road, so I really don’t see it as a stoppage; I just see another bump in the road. We just keep going.”

“It is about finishing the season the right way and taking it one game at a time,” King added. “We have to start with Duke. It is a big game for us. We have to go on the road and focus on this game.”