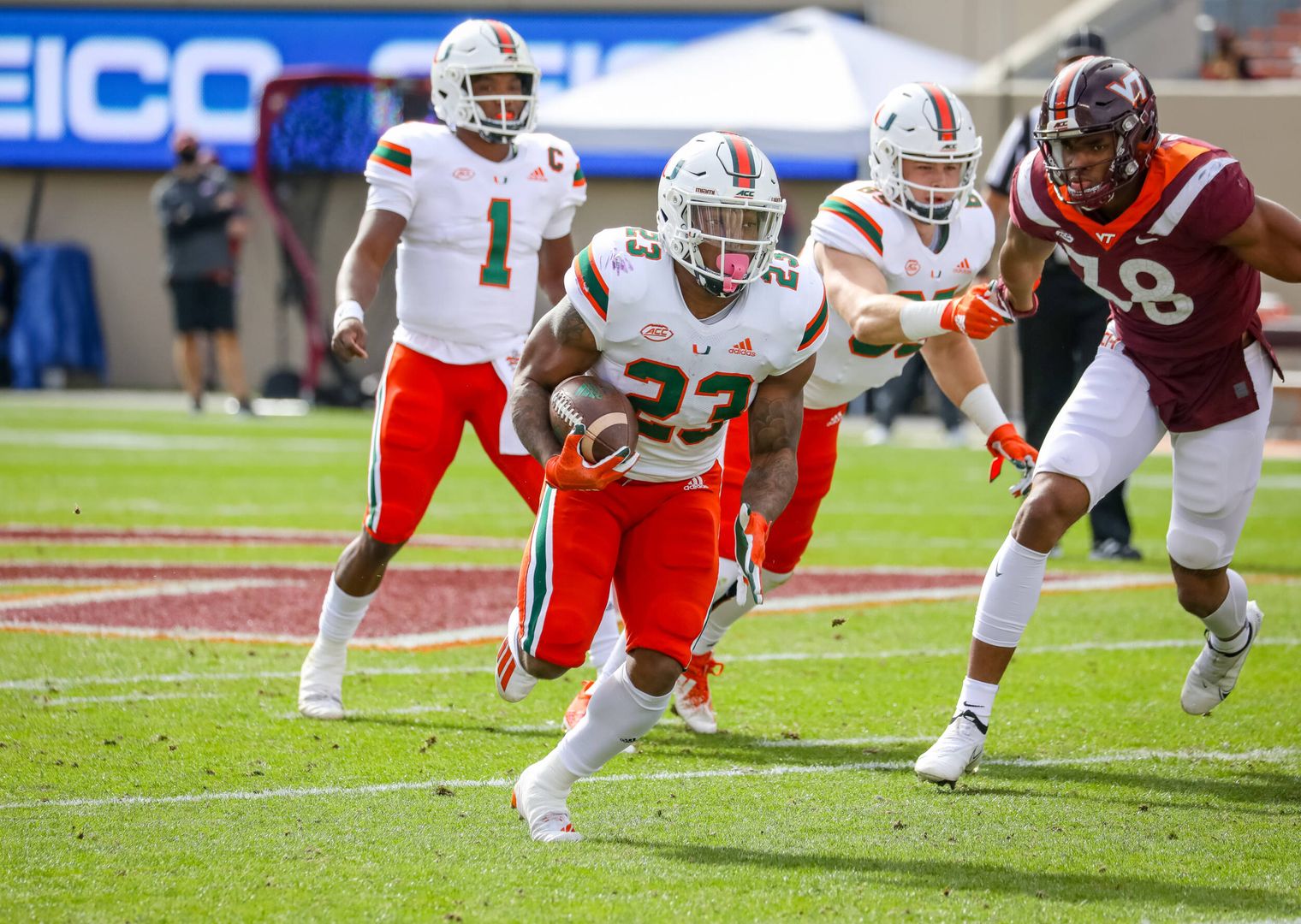 BLACKSBURG, Va. – Another week, another hard-fought comeback for the Miami Hurricanes.

The 25-24 win over the Hokies was Miami’s fourth straight win, its third straight victory by five points or less and its second straight fourth-quarter rally over an ACC opponent on the road.

No wonder Hurricanes head coach Manny Diaz was smiling once he caught his breath.

“It’s like what we found out last week, defensively, sometimes you are not going to have your ‘A’ game and you have got to find different ways to win games,” Diaz said. “It’s what we’ve been talking about all year. That is what we are learning how to do and we did it.”

Making Saturday’s win over the Hokies that much more impressive? The fact the Hurricanes played without 13 players, including several starters, who were unavailable at Virginia Tech. 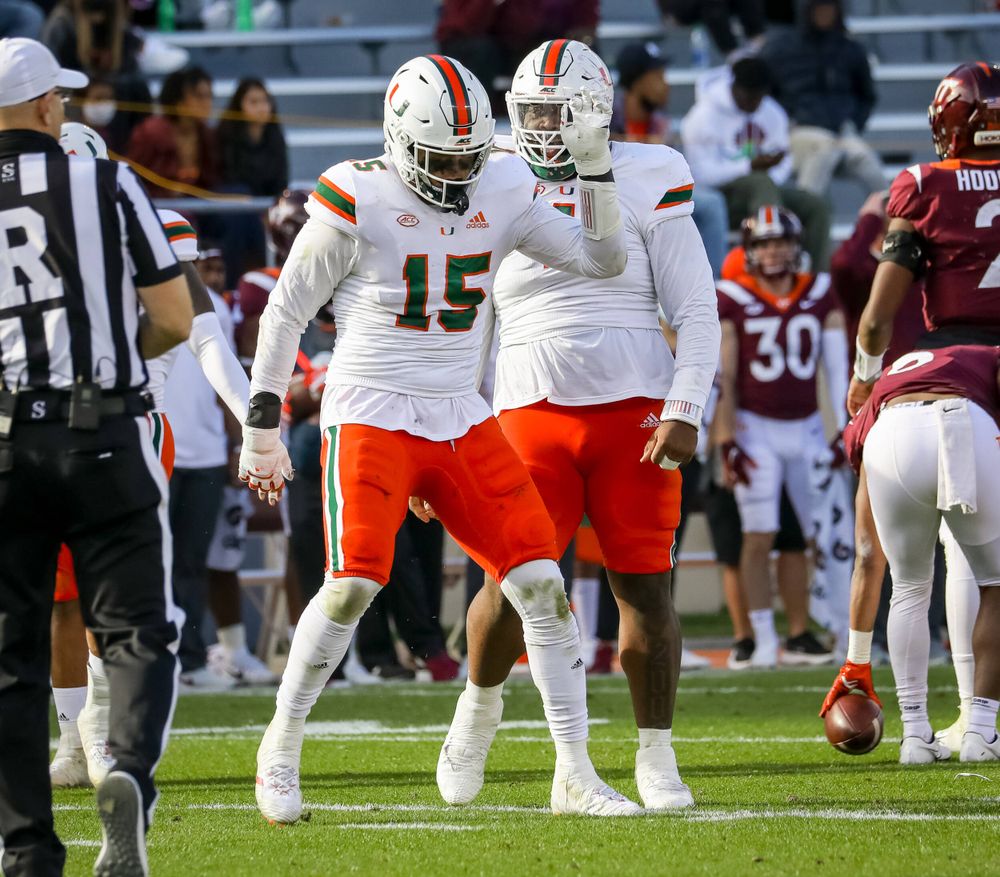 There were, Diaz conceded, questions about whether the game would even be played.

But the coach pointed out his available players wanted an opportunity to deliver – and that’s they did, helping give the Hurricanes a win that keeps them near the top of the ACC standings and in the mix for a potential berth in the conference title game.

But, to play their way into that game, the Hurricanes have to keep winning and another conference opponent – Georgia Tech – looms.

Before the Hurricanes turn their focus to the Yellow Jackets, though, here’s a look back at the win over Virginia Tech and what Miami can take from its afternoon in Blacksburg.

1. The Hurricanes have found fourth-quarter success

During the course of its four-game win streak, Miami has outscored its opponents 28-10 in the fourth quarter and in each of their last two games, it’s the Hurricanes’ fourth-quarter performances that have made a significant difference.

Against NC State, the Hurricanes scored 13 unanswered points in the final quarter to come back for the win. Against Virginia Tech on Saturday, the Hurricanes took their first lead of the day with 5:59 left when quarterback D’Eriq King and Mark Pope connected on a 36-yard scoring pass that would eventually be the difference in the game.

After the Hurricanes took the lead, Miami’s defense did its part in the game’s final minutes, keeping Virginia Tech out of the end zone by forcing a turnover and making multiple stops.

In back-to-back games, the Hurricanes have proven they cannot be counted out, even if trailing late. And they’ve proven they are capable of rallying late, something they couldn’t always manage during a tough 2019 season.

“I think it’s the way we practice, our tempo offense and the work we are doing in the weight room with [Director of Strength and Conditioning] David Feeley,” Diaz said. “I think we were plus-22 in the fourth quarter going into this game and I think in the last five games, we were even better than that. We’ve seen it, we’ve seen teams wear down with our temp and just not being able to hang. Our guys are able to play a lot of snaps and still play very well in that time of the game. … I thought Virginia Tech played very hard and very well over four quarters, but we are certainly able to maintain our energy level for 60 minutes.”

A week after putting together one of the best performances by a Miami quarterback in program history, King was called on to – again – engineer another second-half rally.

After the Hurricanes fell behind 24-13 late in the third quarter, King led Miami on a pair of touchdown drives that, ultimately, put the Hurricanes ahead and gave them the win. 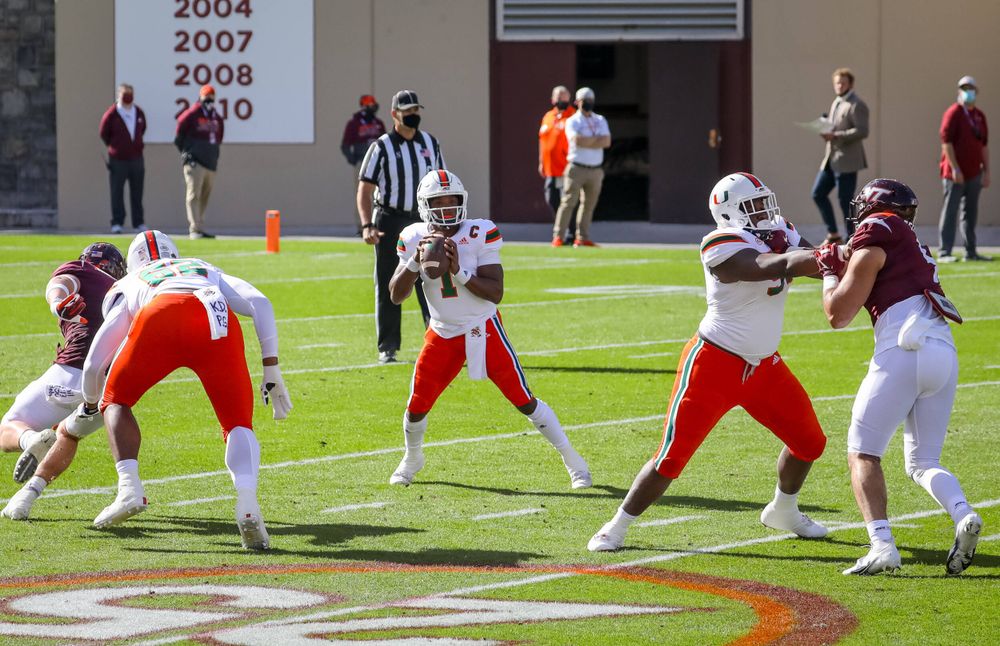 King, who faced consistent pressure from the Hokies all afternoon, completed 24 of his 38 passes for 255 yards with a touchdown. His numbers weren’t as flashy as they were a week prior at NC State, but his poise and experience made a difference.

“One thing about King, he’s going to be himself – fourth quarter, no matter what the score is,” Pope said. “I’m all for him. I’m going to be there to help him and we’re [going to] get the job done.

With the Hurricanes facing depth issues at several positions, more than a few players were called on to play higher snap counts than they might otherwise. Defensive end Jaelan Phillips was one of those players and the redshirt junior answered the call.

Phillips finished with eight tackles, including a team-high 4.5 tackles for loss and two sacks. Some of his biggest plays came when the Hurricanes needed them most, including a sack on a late Virginia Tech possession and a tackle on the game’s final play.

“With the depth, it’s definitely hard when you don’t have any backups. I really only came out for a handful of snaps today, but [you’ve] just got to step up when the opportunity is there,” Phillips said. “So, we’ll be excited to have our guys back next week, but you just got to play the cards you’re dealt.”

In recent weeks, cornerback Te’Cory Couch has played some of his best football since arriving at Miami and that continued Saturday against Virginia Tech.

Couch made his first start as a Hurricane at Lane Stadium and, moments after Miami took its first lead of the game late in the fourth quarter, Couch picked off a Hendon Hooker pass that ended one of Virginia Tech’s late drives. 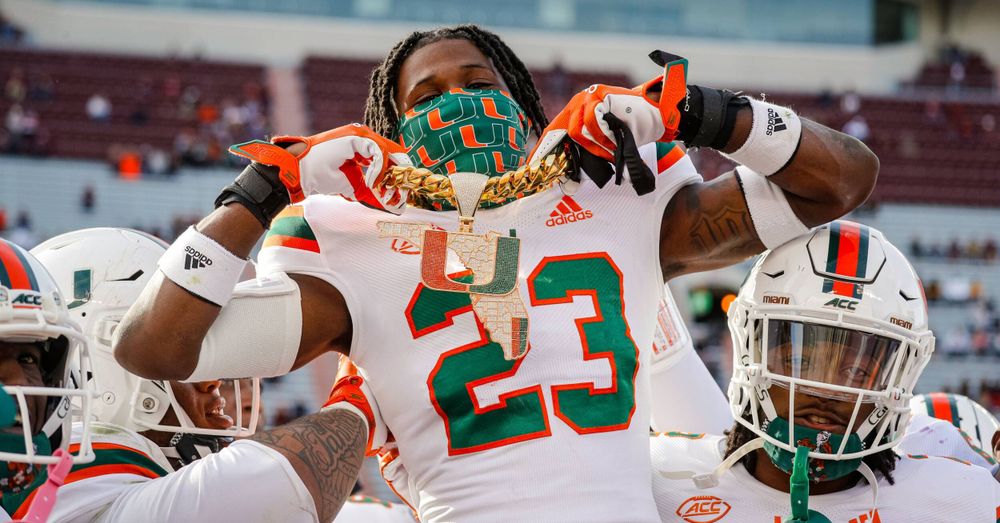 Couch finished with five tackles, was in on a sack and had a quarterback hurry. That hurry and one of his tackles came in the fourth quarter and helped him earn some significant praise from his head coach.

“Te’Cory has done a great job on the nickel blitz, but the play he made in coverage, that was straight man coverage and they were throwing a post and so many guys almost make that play. They lay out and they almost have it but the ball kind of squirts out and hits the ground. To make that play at that moment in the game, that is competitive greatness,” Diaz said. “I think what is happening is that he is getting comfortable being in the game and having a large role and starting to make those plays. The play he made on punt coverage, sprinting down the field 55 yards and whacking the dude down there just shows his effort and the want that Te’Cory has. I’m really proud of his development and his role will only increase because of it. He’s playing as good as anybody that we have in the back end right now.”

5. Cam Harris finds his way back into the end zone

Harris started the season on a high note, but has struggled to find his way into the end zone in recent weeks. Though he put together a solid performance in last week’s game at NC State, rushing for 62 yards against the Wolfpack, there was no touchdown for him that night.

Saturday against Virginia Tech, though, Harris broke through.

The junior finished with a game-high 63 rushing yards and scored on a 6-yard run with 1:27 left in the third quarter. The score was his first rushing touchdown since he scored twice in Miami’s 52-10 win over Florida State on Sept. 26.

With three conference games remaining on the schedule, Harris will look to build on that moving forward. He could find more success next week against Georgia Tech, given that the Yellow Jackets are giving up an average of 202.7 rushing yards per game. Only one ACC team – Syracuse – has done worse against the run this season.

Ahead of last month’s game wide receivers coach Rob Likens challenged his players to start making the plays they hadn’t been able to make early in the season.

Before the game against the Cavaliers, no receiver was listed as a starter on Miami’s depth chart. Instead, Likens, Diaz and offensive coordinator Rhett Lashlee made it clear that reps would be earned after some mid-season competition on Greentree.

Miami’s receivers have risen to their coaches’ challenge in recent weeks.

Mike Harley earned ACC Receiver of the Week recognition twice after putting up big numbers against both Virginia and NC State and scored the game-winning touchdown against the Wolfpack. 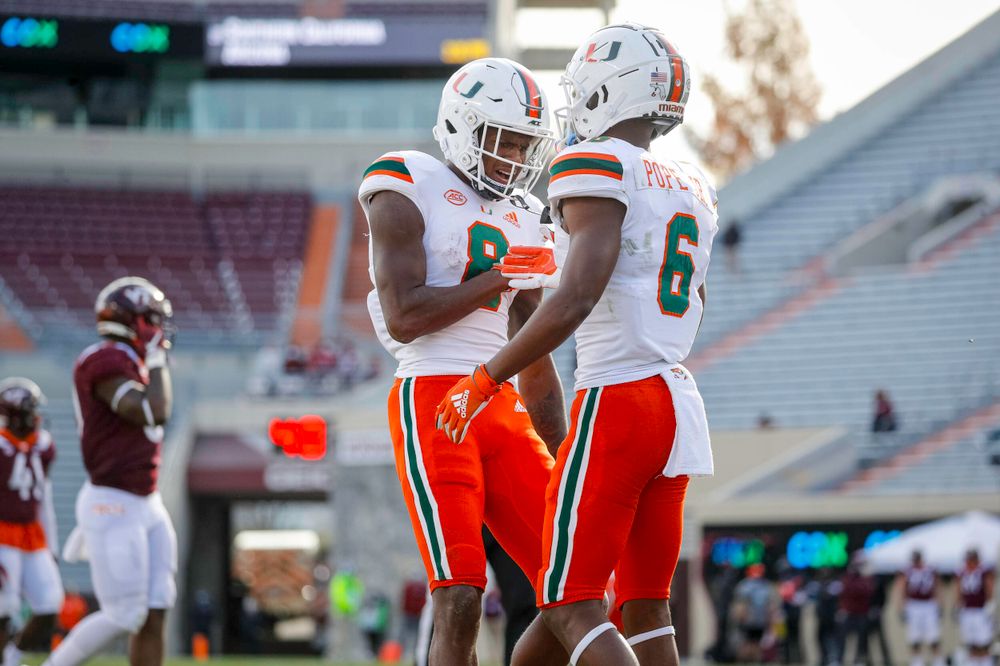 On Saturday, it was Pope who delivered the game-winning touchdown, while Dee Wiggins posted eight catches for a game-high 106 yards.

In all, the veteran trio of Harley, Pope and Wiggins combined for 18 catches and 207 yards against the Hokies and showed, again, they can be reliable targets for King.

“No matter what goes on in the game, you have to play the next play,” Wiggins said. “If you stick with that play, you are going to play bad the whole game. I just had to stay focused on keep playing.”

Lou Hedley has been a reliable, steady force for the Hurricanes since arriving in Coral Gables last year. But the punter entered the 2020 season determined to be even better.

He’s worked on the placement of his kicks and on Saturday, flipped the field more than once for Miami while averaging 52.4 yards on his seven punts.

He delivered three 52 yard punts in the fourth quarter, including one that set Virginia Tech up on its own 9-yard line with a little more than four minutes left and another that set the Hokies up on their own 3-yard line on the game’s final possession.

Virginia Tech wasn’t able to score on any of those drives and Miami hung on for the win.

Hedley isn’t the only specialist making big plays for the Hurricanes.

Kicker Jose Borregales converted on both of his field-goal attempts against the Hokies and helped the Hurricanes go a perfect 4-of-4 on red zone opportunities.

Borregales has been a difference-maker for Miami all season. He is 15-of-16 on field goal attempts on the season and is 28-of-28 on point-after attempts.

The Hurricanes came into Saturday’s game knowing Hooker’s mobility was going to make him a challenge to defend. And early on, the big 6-foot-4, 220-pound dual-threat quarterback gave Miami headaches.

He completed 8-of-10 passes for 117 yards in the first half and had a 53-yard scoring run to give the Hokies their first touchdown of the day.

But the Hurricanes adjusted, holding Hooker and the rest of the Hokies offense at bay late.

After a 38-yard field goal in the third quarter, Virginia Tech wouldn’t score again, Miami’s defense keeping the Hokies out of the end zone on their last five possessions of the day. 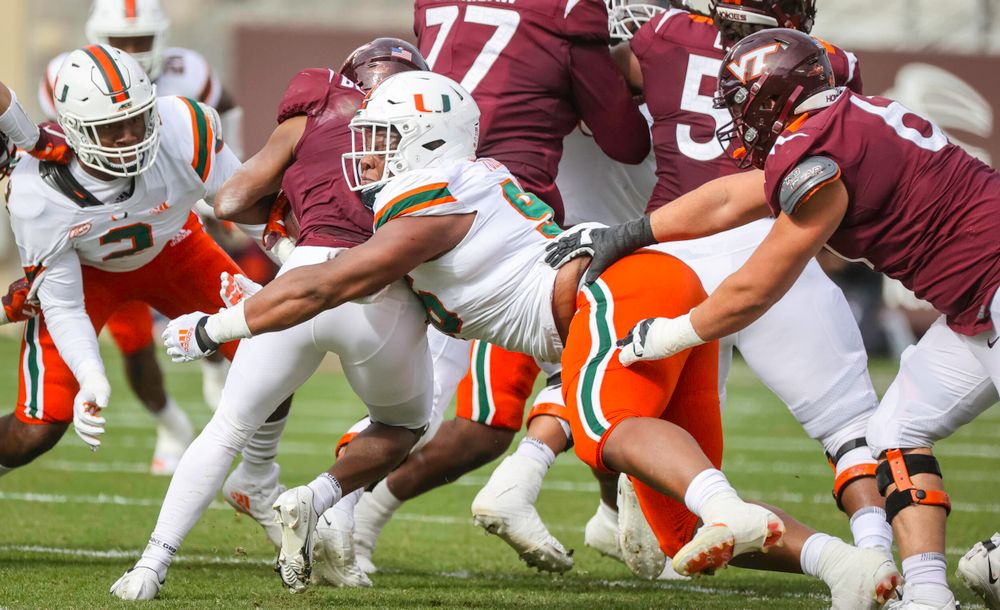 Hooker was sacked six times, picked off late and managed just 85 passing yards in the second half – all of which impressed defensive coordinator-turned-head-coach Diaz.

“We did feel like we were winning the battle up front and we were playing better than we have played on some of those run plays,” Diaz said. “We feel like our run defense has started to improve here in the last couple weeks, just in terms of the way that we are playing blocks. I think that was a part of it. In those five drives, there was no margin for error because it was a two-score game for a lot of that time.”

Because of an off week and back-to-back road games, the Hurricanes haven’t played a home game in what’s felt like an eternity.

That will change this week when Miami hosts Georgia Tech on Saturday. It’ll be the Hurricanes’ first game back at Hard Rock Stadium since their 19-14 win over Virginia on Oct. 24 and it’ll kick off a stretch that will have the Hurricanes close the regular season with two of their final three games at home.

That can only help as Miami tries to continue trying to play its way into the conference title game. And there’s no doubt this week, the Hurricanes will be thinking about some redemption after coming up short against Georgia Tech 28-21 last season.