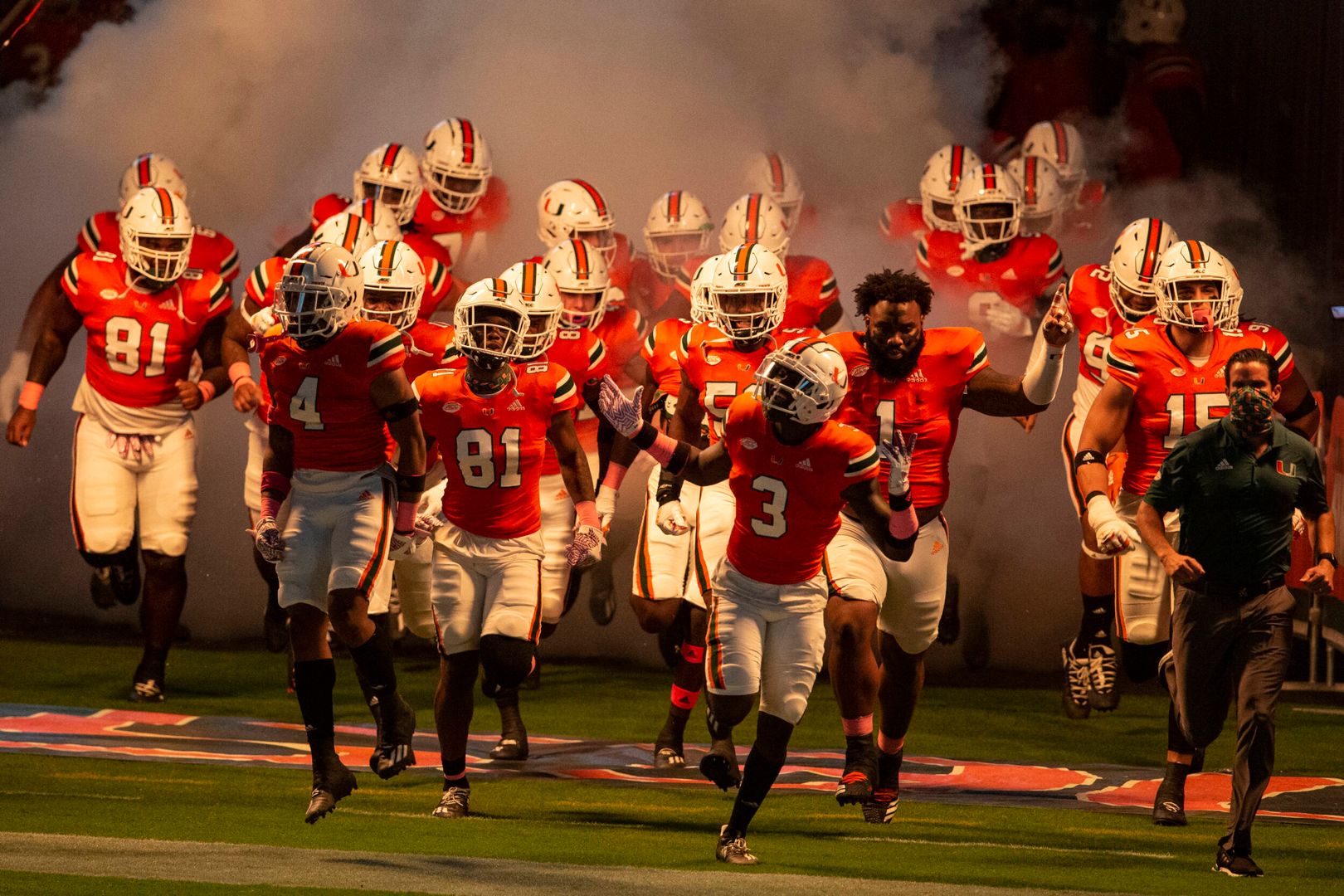 CORAL GABLES, Fla. – The Hurricanes are always trying to get better.

That may sound obvious and simple enough, but that is exactly the point. For head coach Manny Diaz’s squad, weekly improvement means an increased likelihood for success and that is the road map to achieving Miami’s goals.

The Canes’ commitment to development and improvement meant they spent the bye week working on themselves before they turned their focus to Friday’s opponent, the NC State Wolfpack.

“We had the coaches package tapes for all their players where they could really analyze what the opponents see out of them and here are some things you are doing well,” Diaz said. “We really focused on our weaknesses.”

No. 10/11 Miami (5-1, 4-1 ACC) has struggled coming off a bye week in recent history, but the Hurricanes have had success against the Wolfpack. Coming off its second open date of the fall, UM travels to NC State for its first road game since Oct. 10. The matchup is slated for 7:30 p.m. on ESPN – Miami’s sixth primetime game in seven games so far this season.

“The bye week was good for us to see what certain plays we were bad at and just try to make improvements,” quarterback D’Eriq King said. “We did a lot of self-reflecting over the bye week and I think it is going to make the team a lot better in terms of just noticing the little things. I think this week of practice has been a really good week so far.”

Miami’s work during the bye week led to a strong week of practice ahead of this week’s game in Raleigh, N.C. Their commitment to improvement is something that defensive end Quincy Roche believes will benefit the Canes on Friday and beyond.

“I think it is something everybody embraced, and it will make us better during the second half of the season,” Roche said. 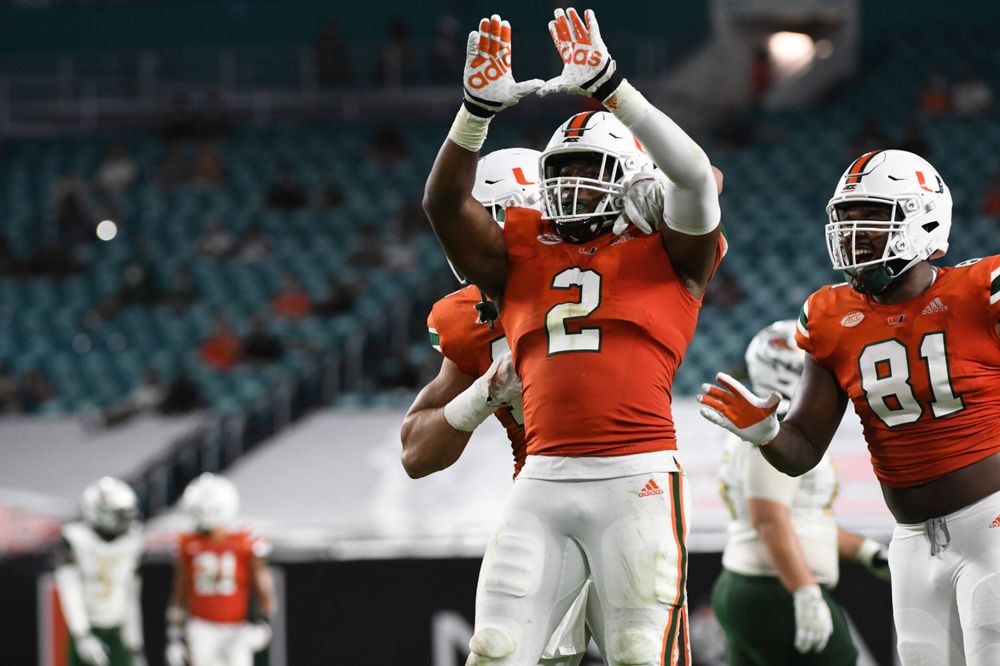 Defensive end Quincy Roche and the Hurricanes' defensive line will confront one of the top offensive lines in the ACC on Friday.

Friday’s game vs. NC State is the 16th matchup in the history of the series; UM leads the series 9-5-1, including a 3-1 lead in games in Raleigh, N.C. The two teams have not met since 2016, when the Hurricanes emerged with a 27-13 road win over the Wolfpack at Carter-Finley Stadium.

Since joining the ACC, the Hurricanes have won three of five meetings vs. NC State (2004, 2012, 2016), with its two losses coming in 2007 and 2008. Miami is looking to continue its strong start; with a win Friday, UM would have at least six wins in its first seven games for the second time in the last four years.

“They’ve always been challenging,” Diaz said. “Their entire program, I know their strength coach very well, I know Dave Doeren is a defensive-minded head coach. They’re a very strong program, they’re a very tough program. You can just see when they hit people on contact, people go backwards. So, our guys are ready for another challenge on the road.”

NC State poses challenges for every team is plays because the Wolfpack uses an unconventional defensive scheme that most opponents rarely see.

“It’s just normally something you don’t really see every week and their defensive coordinator has always had a lot of success with it,” Diaz said. “If you remember we had the matchup in the West Virginia game in the Orlando bowl a few years ago and we couldn’t get any yards for the large portion of the first half of that game. There’s a threat of maximum coverage and there’s a threat of maximum pressure on every play.”

Wolfpack defensive coordinator Tony Gibson has been running the 3-3-5 defense for many years and understands the nuances of how to confuse an offense with it.

“One thing they’ve always done a really nice job is they’re not afraid to bring the house on 1st and 10 and 2nd and 10 from anywhere on the field,” Diaz said. “They can bring a couple of different pressures. I mean there’s a lot of different things they can throw at you, so you got to have a lot of great communication throughout your offensive line and backs. And then you’ve got to check because they’re able to mix up some coverages down the field where you can make some mistakes if you get the wrong read.”

King, who is Miami’s offensive leader, knows he can make a big impact against NC State’s defense with his arm and his legs. The redshirt senior quarterback spent the bye week honing his skills ahead of Friday’s challenging matchup.

A gifted dual-threat quarterback, King believes he can help open up Miami’s ground attack by running the ball more himself in addition to handing it off to the Canes’ talented running backs.

“Getting myself involved early and maybe pulling a few [zone-reads] will open up a lot of stuff,” King said. “If I can be a little more aggressive, it will help a lot of things out.”

Offensive coordinator Rhett Lashlee knows his unit will face a difficult test against the Wolfpack’s Odd Stack defense. In addition to the scheme being foreign to most of Miami’s offensive players, NC State’s personnel is well suited to excel in the 3-3-5 with linebackers Payton Wilson (53 tackles, 5.5 tackles for loss) and Drake Thomas (46 tackles, 6.5 tackles for loss, two sacks) leading the way. But Lashlee believes the Canes will have opportunities to succeed and they will need to capitalize on them.

“I think it plays to the strengths of their personnel. They’ve got three really good linebackers, they’ve got a lot of length on the back end,” Lashlee said. “People play odd front, they play even front, they play all kinds of stuff, stack is very, very unique. It gives you chances to make some big plays, but it also gives them chances to do what they do well, and they make a lot of big plays out of it as well.”

We did a lot of self-reflecting over the bye week and I think it is going to make the team a lot better."

On offense, NC State is led by running back Zonovan Knight (69 carries, 406 yards, 3 TDs) and wide receiver Emeka Emezie (23 catches, 370 yards, 3 TDs). Both playmakers – along with 6-foot-7 tight end Cary Angeline – are the standouts in their position groups, but they are just the beginning of what makes the Wolfpack offense go.

“They’re big, they’re physical,” defensive coordinator Blake Baker said of NC State’s receivers. I think [Emezie] has unbelievable body control; he’s able to really separate at the top of the route. Their quarterback does a good job putting it in different locations, back shoulder and throws the fade over the top. I think their inside guys are shifty. They’re able to catch the short, intermediate routes and they do a nice job with it. [Emezie] really catches my eye as an individual that we have to be aware of at all times.”

NC State’s rushing attack will look to test Miami with its physicality. The Wolfpack also features one of the best offensive lines in the ACC and they will look to clear running lanes for Knight and Ricky Person Jr.

“Their running game is very, very good,” Baker said. “The one thing that doesn’t get talked about a lot, in my opinion, is their offensive line, and just their overall team strength from running back, wide receivers and especially upfront. [Ikem Ekwonu] is as good as an offensive lineman that we’ve seen all year. As a unit, it’s probably the best offensive line we’ve faced to date when you talk about all five starters as one whole unit. I think their running backs are both really strong players. They pick up the tough yards. They do a great job moving their feet on contact and that’s one of the big things we challenged our defense with especially having a week off.”

The Wolfpack will be without quarterback Devin Leary, who suffered a broken leg against Duke earlier this year, but they feature a pair of quality options under center in redshirt junior Bailey Hockman and true freshman Ben Finley.

“Hockman, when you look at his body of work, he’s had a pretty productive year,” Baker said. “Especially when you talk about the first game of the season that he started; I think he started off 10-for-10. Really can tell he had control of the offense. In my opinion, when he was in, they did not skip a beat. When you talk about their tempo, changing it up, going fast, going slow, a variety of different formations and plays, the playbook, to me, is wide open when he’s in there and he does a nice job seeing the field and getting the ball out quickly.

“Finley, I thought gave them a nice shot in the arm,” Baker added. “There were times that he looked like a four-year starter back there and then there were times where he looked like a freshman as well. I think Hockman probably overall has a better control of the offense than Finley, but I think they both present the same problems. They’re both elusive enough to hurt you with their feet, good decision-makers and accurate ball throwers.”

No matter who plays quarterback or what NC State’s defense does, Miami knows what it needs to do to leave Raleigh with a victory and that is exactly what the Hurricanes plan to do.