MIAMI GARDENS, Fla. – The Miami Hurricanes outlasted Virginia on a wet south Florida night, making big plays to start and end the game in a 19-14 victory.

The 9,940 fans inside Hard Rock Stadium saw senior Mike Harley turn in one of the best performances by a UM wide receiver in recent history, while the Canes’ defense made big stops in key moments to help No. 11 Miami (5-1, 4-1 ACC) defeat Virginia (1-4, 1-4 ACC) in Miami Gardens for the fifth consecutive meeting.

“This is what we have to prove that we can do, right? We have to be able to grind out wins when it’s just hard to win,” head coach Manny Diaz said. “And Virginia was making it tough. We were moving the ball; they were having a hard time stopping us at times, but we weren’t getting the points in the red zone. We were settling for three. The one time we had the field goal tipped. And so the score was always tight; it kept that pressure on you. And I felt like it bothered us in the first half and I thought at halftime we had to kind of readjust our mentality and say, ‘Did you not expect it to be this way?’ In that we want to be okay with it being difficult to win and then seeing it out. Because certainly, Virginia had a chance, obviously, to steal it at the end and we had to make some key plays there to not allow that to happen.”

Miami emphasized making explosive plays and the Canes did just that on their opening drive, hitting on a pair of long passes to take a 7-0 lead just 28 seconds into the game. Quarterback D’Eriq King connected with tight end Will Mallory for a gain of 32 yards before King found receiver Mike Harley on the second snap of the game for a 43-yard touchdown.

“I think he helped us a lot,” King said of Harley. “Will made a great catch on the first play and then Harley took deep. I think that’s what we need. I think we’re going to keep after throwing the ball deep and keep trusting those guys, and I think those guys will make plays. Mike played a great game. He stepped up. Like you said, I think the receivers felt challenged throughout the week just from inside the building. So, he stepped up. He had an outstanding game. I’m happy for him.”

Harley turned in an impressive final stat line, posting a career-best 10 catches for a career-most 170 yards and a touchdown. The senior’s 10 catches are tied for second-most by a Hurricane since Miami joined the ACC, while his 170 receiving yards are the most by a UM player since Phillip Dorsett posted 201 yards in 2014 vs. Arkansas State.

“It’s very hard to play this type of position at this type of university,” Harley said. “You know, our backs were against the wall and we were hearing everything on the outside, but we don’t get distracted by it and we don’t get in our feelings about it; we just go to the practice field and compete to get better every day. Someone just had to get out of their comfort zone because we were too comfort. So, coach made a challenge and, me being the oldest guy, a senior, I just had to step up and stay consistent. Coming into the first practice on Tuesday, Coach [Rhett] Lashlee sent a couple group texts out. He told us before the meetings started that no one had the job and that it was up for grabs; whoever has the best performance for the three or four days of practice will get the starting job. In the text, I reacted to it like, ‘Okay, I have to step up.’ Honestly, I shouldn’t be in that position, coming in as a senior, but coach had to make some changes and some guys have to make plays so that is what we did tonight.” 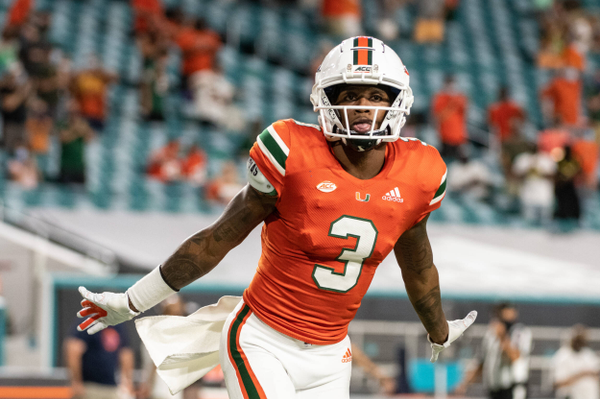 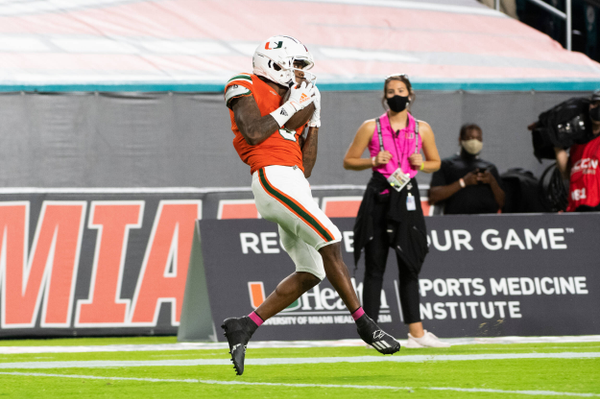 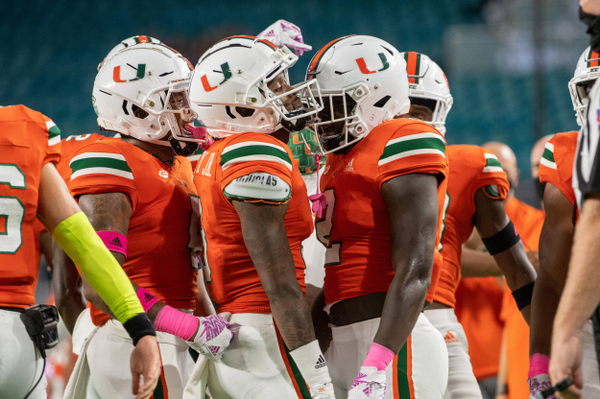 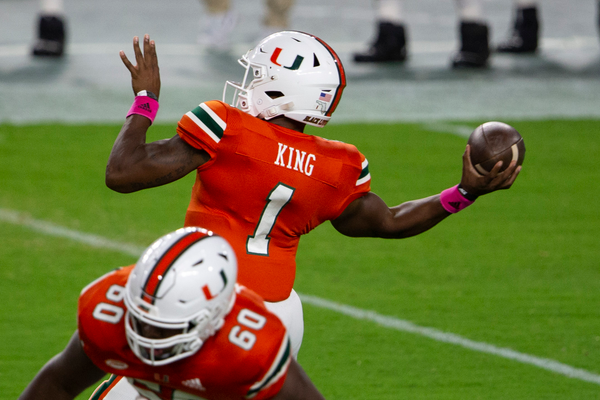 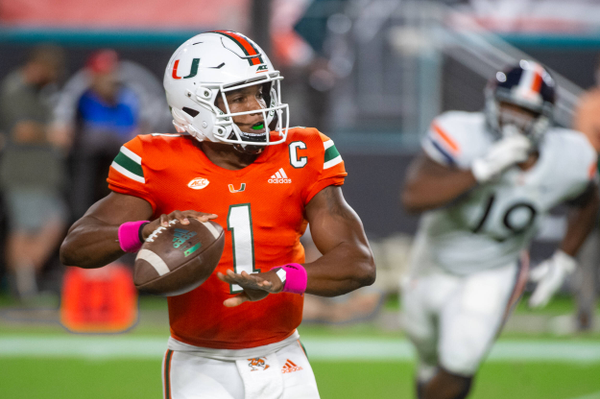 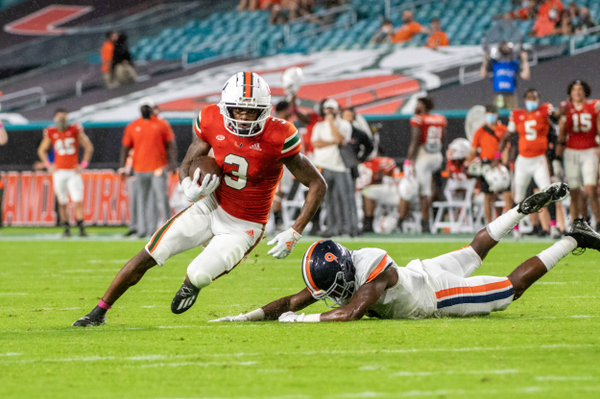 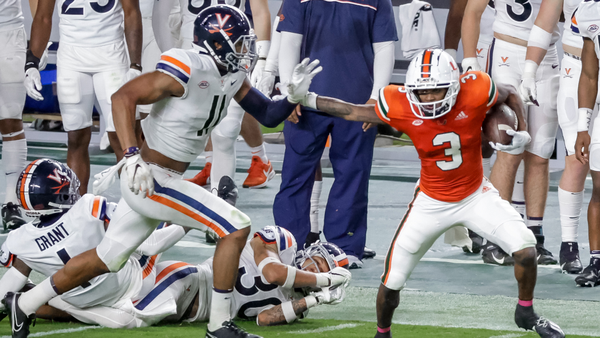 After Miami safety Amari Carter was disqualified for targeting on the first play of Virginia’s opening possession, the Cavaliers countered with an 11-play, 64-yard scoring drive that ended with a two-yard touchdown pass by quarterback Brennan Armstrong to tight end Tony Poljan. Poljan, who managed to get his foot to land just inbounds as he was being hit by safety Bubba Bolden, evened the score at 7 apiece less than five minutes into the game.

“I really just went up to coach Diaz and let him know, whatever he needs me [to play], I can play,” said striker Gilbert Frierson after volunteering to play safety after Carter’s penalty. “‘I can do that for you. Just give me the basics and we can get it done.’ We only had one goal; it was to win by any means. And no matter what happens during the game, throughout the game, we would leave with a win.”

The two sides traded punts for the rest of the opening quarter before Miami seemed poised to break the stalemate early in the second quarter. Kicker Jose Borregales’ 42-yard field goal attempt was blocked by UVA and the game remained tied at 7-7 with 14:02 remaining in the half.

“I felt like in the first half we forgot maybe that it’s hard to win,” Diaz said. “I felt like we played a little bit like we thought it would be easy. It never is. And that’s okay. We knew there are some things we can correct that could create more separation on the scoreboard. But you have to expect that every week in the ACC it’s going to be a battle and I’m really, really proud of our guys for winning that battle.”

King and the Hurricanes marched down the field and jumped back ahead just before half time. The redshirt senior quarterback, who finished the game completing 21-of-30 passes for 322 yards and a touchdown, guided Miami’s offense into UVA territory and Borregales drilled a 32-yard field goal that have the Hurricanes a 10-7 lead with 1:02 left to play before the break.

“Miami-Virginia. How many years in a row? I guess three years in a row it’s seemed like it’s really, really hard to score 20 points in this game,” Diaz said. “I was proud of the way that we played in the second half. Obviously, we need to finish red-zone drives better. Probably left a lot of points out there on the field, but we … were on the other end of that last week playing great red-zone defense. It’s all part of it. You got to give Virginia credit. We know that they’ve got a prideful defensive football team. They’re hard to run the ball against.”

“I was proud of the way that we played in the second half. Obviously, we need to finish red-zone drives better. Probably left a lot of points out there on the field, but we … were on the other end of that last week playing great red-zone defense."

The Hurricanes added another field goal late in the third quarter, as Borregales converted a 20-yard kick to cap a 16-play, 88-yard scoring drive that put the Hurricanes ahead by six points, 13-7, with 3:47 left in the quarter.

“I thought the big point of the game was the plays of our wide receivers and D’Eriq throwing the ball down the field,” Diaz said. “Obviously, they were challenged during the week inside the building and they really responded. First two plays of the game, right down the field. And it just felt like Harley, [Mark] Pope, [Dee] Wiggins, all those guys made—not just even good plays down the field, but they made great plays down the field, which really spurred us on. Even the drive in the third quarter, from backed up, we only got three, but again, just another long drive in the second half that really kind of, in my mind, sort of turned the game in our favor.”

Freshman running back Donald Chaney Jr. added to Miami’s lead when he pounded into the end zone on a one-yard run to cap a 12-play, 80-yard scoring drive. The Canes attempted a two-point conversion, but King was sacked and the UM advantage remained at 12 points, 19-7, with 12:04 left to play in the game.

“I want to start by saying it was mainly off the explosive plays from the wide receivers and D’Eriq [King],” Chaney said of what made Miami’s offense successful. “Once we started feeding off the energy of that, the run game started really flowing. We started getting in the groove.”

But Virginia continued to battle back, with Armstrong tossing a 35-yard touchdown to Henry that brought the Cavaliers within five, 19-14, with 5:27 remaining on the clock.

The Hurricanes ran down nearly five minutes of clock, punting the ball to Virginia with 30 seconds left to play. Lou Hedley’s punt rolled into the end zone for a touchback and the Cavaliers had one final possession beginning at their own 20 yard line.

On second and 10 from the UVA 31, Armstrong fumbled on a multi-lateral play and the loose ball was recovered by Quincy Roche with six seconds left to play. The senior donned the Turnover Chain and Miami clinched its fifth win of the season. 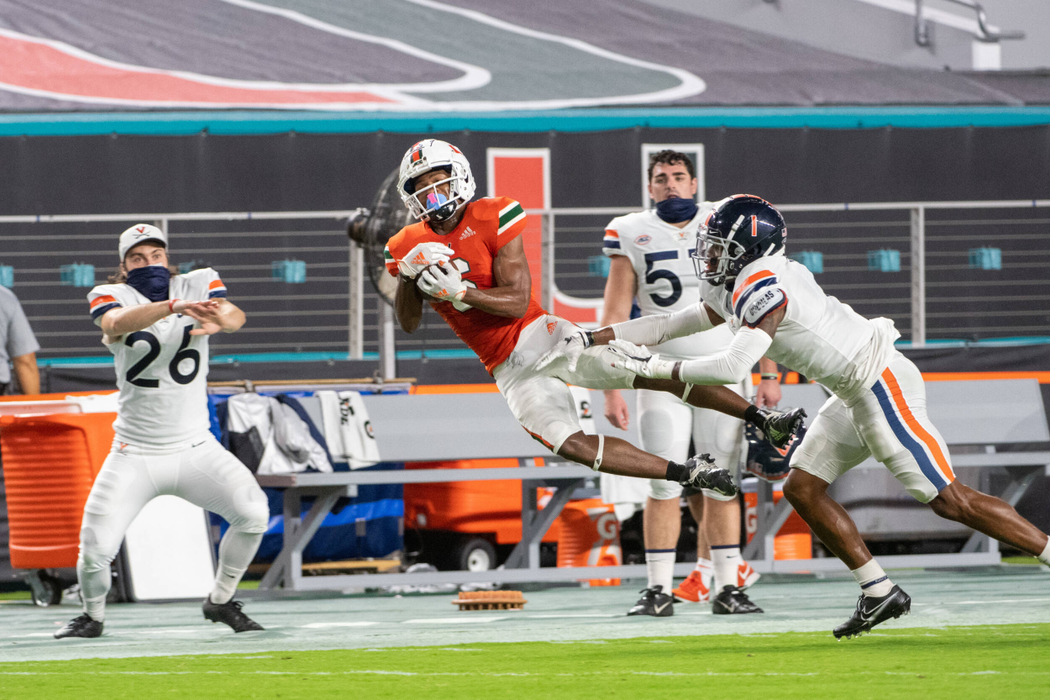 “We’re very pleased with where we’re at. We’re 5-1. We have one loss at the number one team in the country where, admittedly, we didn’t play very well,” Diaz said. “These guys have met challenges. And I will say this—[I was] talking to Bronco [Mendenhall] before the game—the games still look like it’s normal 2020; it is just, there’s nothing normal about this. Can’t even begin to tell you about some of the things that went on this week and he’s got the same stories. So, just the fact to be able to be, at the end of the night, to be in that winning locker room and to see the kids’ faces and see how proud they are with their effort and really accomplishing being 5-1, [that was nice]. It’s been a minute since we’ve been here, so I’m really proud of our guys. And now we get a chance to regroup, hopefully get some guys back healed up for a difficult stretch run.”