CORAL GABLES, Fla. – The images were dramatic, stark proof of what the moment meant.

More than once during Miami’s game against top-ranked Clemson last week, television cameras caught Bubba Bolden’s determined, bloodied face both on the sideline and the field.

Sometimes, he was being tended to by the Hurricanes’ athletic training staff, who worked to try and quickly clean up the decent-sized cut just above the safety’s nose. Other times, he was seen striding up and down the bench area, exhorting his teammates to keep playing hard, even as the Tigers tested Miami in seemingly every way possible.

Even through his own physical pain, Bolden wasn’t about to let his teammates stop fighting.

That’s not his style.

“I’m a competitor. I hate losing more than I like winning,” Bolden said. “It was a physical game. We came in knowing it was going to be a physical game and there was nothing that was going to stop me from playing in that game. I was out there having fun. Just a little battle wound.”

It’s unclear if that battle wound will wind up giving Bolden a permanent reminder of his game against Clemson, but what the redshirt junior most definitively already has is the respect of his teammates and coaches and recognition from many across the Atlantic Coast Conference. 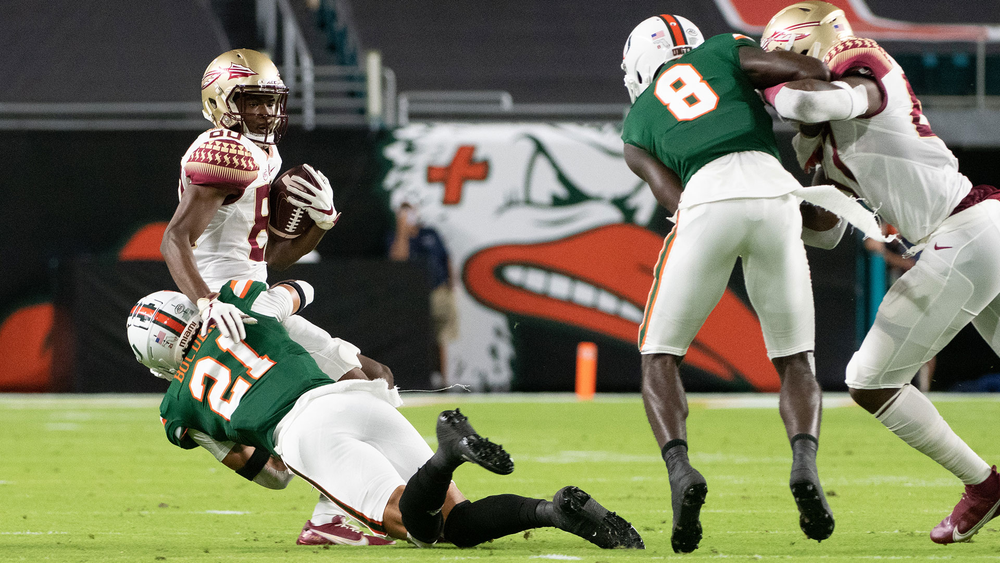 After posting a game-high 10 tackles, forcing a fumble and blocking two field goals against Clemson, Bolden was named the ACC Defensive Back of the Week for the second time in four weeks. His first award came after Miami’s Sept. 19 win at Louisville, a game in which Bolden had a career-high 11 tackles and a forced fumble.

“He plays extraordinarily hard. He plays with great effort. I think he played about 90 snaps of football on Saturday, which is probably a game and a half,” Hurricanes head coach Manny Diaz said of Bolden. “He still starts on our punt team. He’s sprinting down the field to cover punts. He’s a guy that’s completely committed for the team. Obviously, he has the ability to make a play. His tackling has gotten better and better every week and it’s just been fun to watch him go. I think he’s having fun now finally getting into the flow of a season. … This is the first time in quite a while that Bubba’s been able to play week in and week out and I think he’s developing because of it.”

Bolden’s play through Miami’s first four games has been a boon for the 13th-ranked Hurricanes, who on Saturday, will look to get back on track when they host Pittsburgh at Hard Rock Stadium.

And while the praise and the attention – including an online shoutout from former Dallas Cowboys All-Pro receiver Dez Bryant – have been nice, Bolden says his work this season is far from finished.

There are still plays to be made, younger teammates to mentor, skills to improve and games to win. Bolden takes none of that for granted, especially given all he has endured in recent seasons.

In 2018, a suspension at USC prompted the safety to seek a fresh start with the Hurricanes. But in order to enroll at Miami and be eligible to play in 2019, Bolden had to accrue 40 credit hours in the span of 12 months and earn an associate degree. He did that and last October, Bolden made his Hurricanes’ debut in Miami’s loss to Virginia Tech. 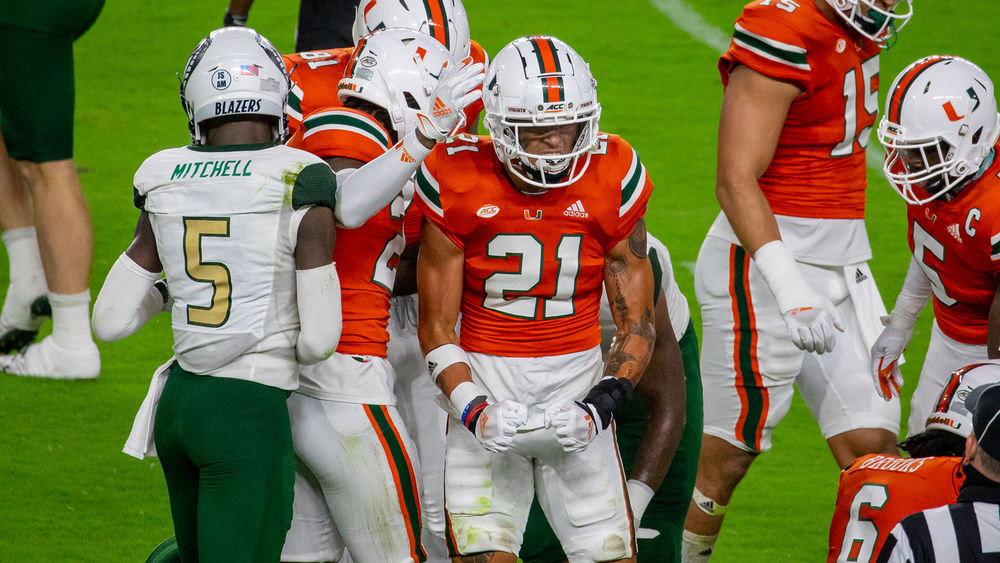 Five games later, though, his return was cut short when he suffered a season-ending injury during Miami’s Nov. 2 win at Florida State.

Suddenly, Bolden found himself back on the sidelines, unsure when he’d have the opportunity to play again.

He was understandably frustrated, but Bolden refused to let himself wallow in self-pity.

With support from his family, his coaches, and his teammates – particularly longtime friends Brevin Jordan and Jaelan Phillips, both of whom had endured their own shares of ups and downs during their respective careers – Bolden recommitted to getting stronger.

By the time he took the field for Miami’s season opener against UAB last month, the safety felt recharged, renewed and ready to make a difference.

Since, Bolden has recorded a team-high 27 tackles, including three tackles for loss. He has a sack, an interception, three forced fumbles and two blocked field goals.

“It was a lot of emotions. I sat down with myself. I sat down with my family, my coaches, my friends and I told them, ‘You’re going to get the best out of me. Even if I don’t play my best, I’m trying my best,’” Bolden said. “I trusted the process. I trusted my coaches. I trusted everyone who gave me some type of help in some way. And I’ve just let everything out on game day.

“I give thanks to God. I give thanks to my family, my coaches, everybody. It’s just a lot built up inside of me and it’s getting loose now. And there’s still so much more to come out. It’s not even reaching the peak yet.”

"It’s just a lot built up inside of me and it’s getting loose now. And there’s still so much more to come out."

But it isn’t just his play that’s making an impact.

The former high school All-American has found his voice as one of the newest leaders on Miami’s defense, too.

That was visible last Saturday against Clemson. And it’s visible every time he takes the time to teach and guide some of his younger teammates, including freshman safety Brian Balom, who found himself thrust into the fire in Death Valley after veteran safeties Amari Carter and Gurvan Hall missed time because of targeting penalties.

“Having that guy that’s a calm head back there, that can sort things out and not just make himself better, but make the players around him better, that to me is what you want out of a leader,” Diaz said.

Added Phillips, “He has that dog mentality that you really can’t teach. He’s just an athlete. If you turn on the tape, you’re going to see No. 21 flying all over the field and that’s something that’s important to have, a leader that leads by example and is that kind of high-energy, high-motivating guy. He definitely inspires his teammates. He inspires me, for sure.” 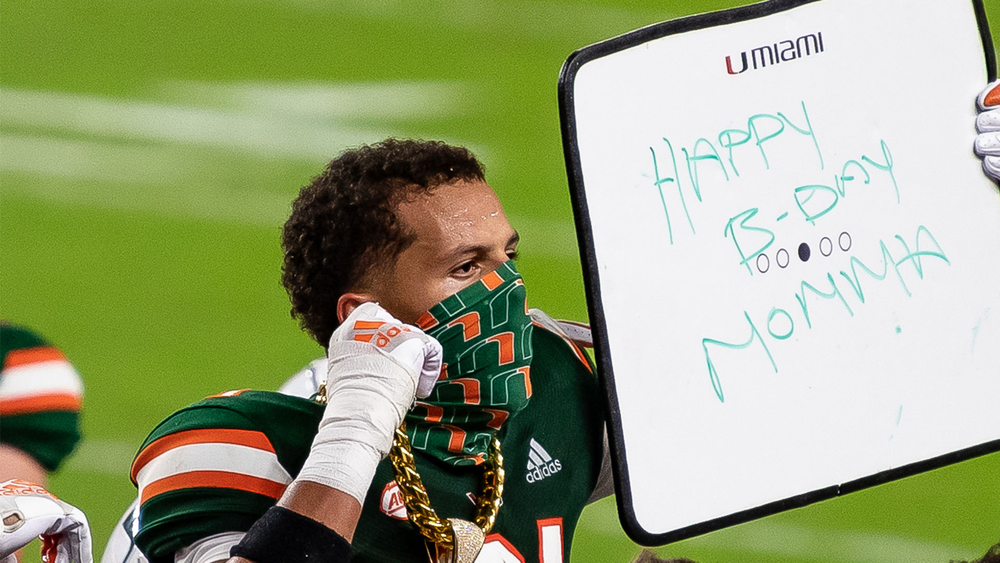 As much as he’s wanted to inspire his teammates, Bolden has found an unexpected source of inspiration himself this season: Miami’s new football chief of staff, Ed Reed.

The Hall of Fame safety, who joined the Hurricanes in February, has become a “big brother” of sorts to Miami’s players, advising them in team meetings, at practice and in games.

“No one is in a better position than we are. I give thanks to him. I give thanks to Coach Diaz and everybody for bringing him on the staff,” Bolden said of Reed. “It was definitely a good addition and it wasn’t just a good addition for the safeties. It was a good addition for the whole team. You can feel his presence. … It’s eye-opening how one person has so much impact on the world and on the sport. He’s so real. Just seeing that gives me a lot of motivation to get better … We’re very thankful for him.” 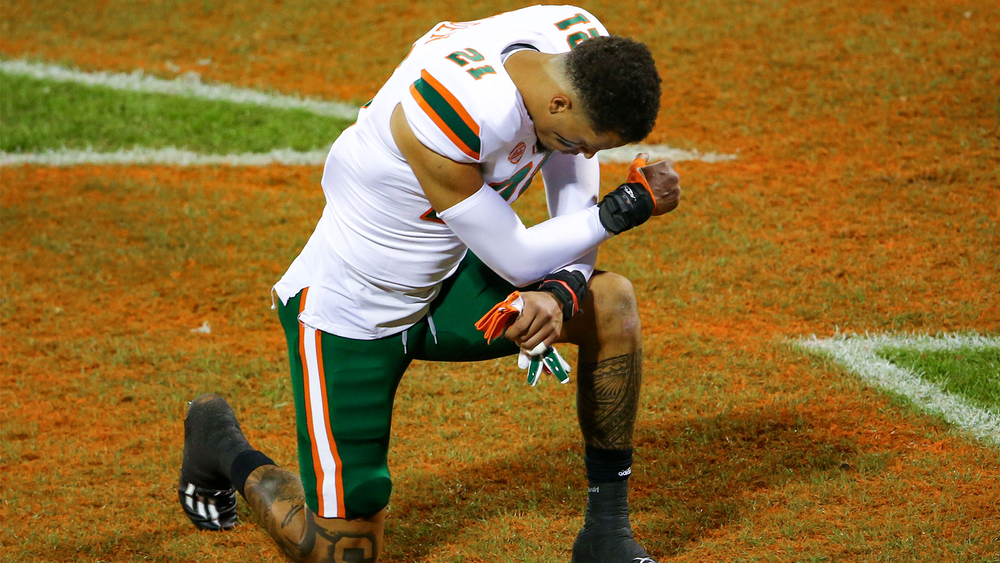 The Hurricanes, meanwhile, are thankful too, for Bolden and all he’s given Miami during his short time in Coral Gables.

Now, both – the team and the safety – say it’s time to continue building on what’s been a memorable start to the season.

“I want this season to end knowing that our team gave it our all, that we always stayed connected,” Bolden said. “Our main mission is to win a championship. I feel like, especially for me, that’s always the main goal: championships. That’s what I came here to do. I came here to be the best and I can’t settle for anything but the best. That’s what we’re going to strive for every day. We’ll take it game by game, and each game, we’ll try to be the best every day.

“I feel like this team can do some great things. … And it’s not just me and my mindset. It’s a real feeling. I saw the faces on people after the Clemson game. I saw the faces on people when we came in for film and for weightlifting and I saw how we attacked the weight room. It showed this team wants to be great. This team really wants it. I expect championships and I expect our team to be together and stay together.”