Ten Takeaways from Miami's Loss at No. 1 Clemson

CLEMSON, S.C. – Entering their matchup against top-ranked Clemson, the Hurricanes made it clear: they knew they faced a daunting challenge in facing the unbeaten Tigers.

Saturday night at Death Valley, that test proved every bit as tough as Miami expected.

Though the Hurricanes managed a few big plays and were able to put points on the board, Clemson jumped out to an early lead and never looked back in what was an eventual 42-17 win.

“First and foremost, I have to say congratulations to Clemson. They obviously thoroughly outplayed us tonight. We are very disappointed in the way that we presented ourselves,” Hurricanes head coach Manny Diaz said after the loss. “I cannot fault our effort, but I thought our discipline, in terms of doing things right, made it very difficult for us to execute against a top-ranked team on the road.”

The Hurricanes – who put together plenty of offensive highlights in their wins over UAB, Louisville and Florida State – were outgained 550-210 on Saturday night and managed just nine first downs to Clemson’s 34.

But it wasn’t just Miami’s offensive struggles that took a toll Saturday.

The Hurricanes made too many mistakes, from penalties to turnovers. And those proved too much to overcome against an already-formidable opponent. 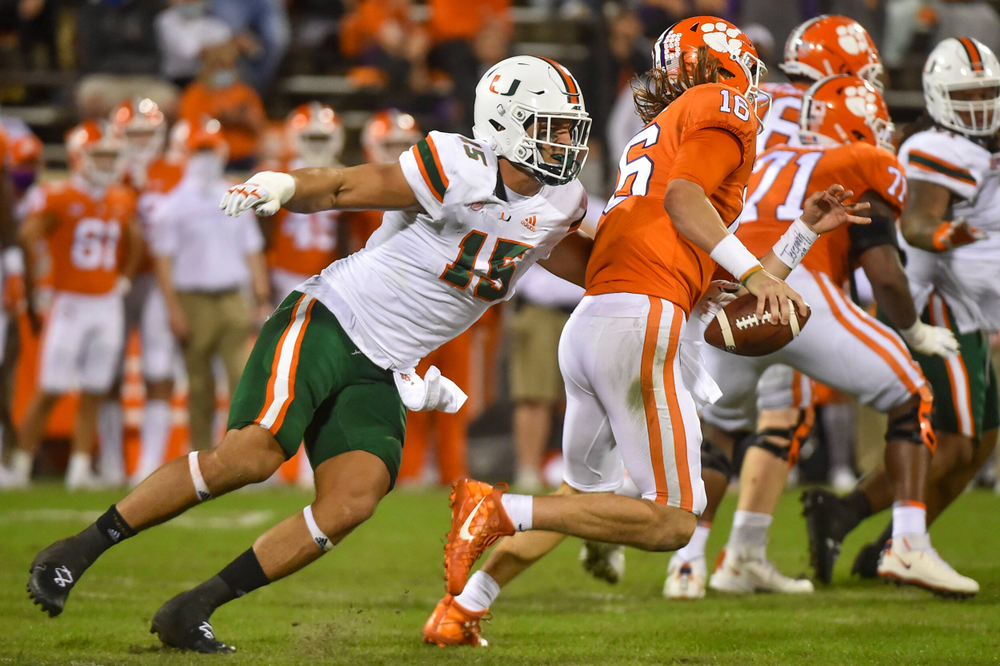 Still, as frustrating as the loss to Clemson was for Miami, the Hurricanes still have seven games left on their schedule, starting with this week’s home game against Pittsburgh and they stressed there is still a lot of football still to play.

Many of their goals are still ahead of them. To achieve them, though, the Hurricanes have to find a way to handle two immediate challenges: finding ways to fix some of the issues that emerged against Clemson and responding after their first loss of the year.

Here, some of what the Hurricanes take from their game at Clemson as they begin turning their focus to Saturday’s game against the Panthers.

1. For the first time this season, Miami has to pick itself up after a loss

Through the first three games of this unorthodox season, things have gone pretty much as well as the Hurricanes could have wanted.

They won every time they took the field. They handled a variety of challenges, from responding after their opponents scored to coping with roster adjustments and potential weather delays. They saw themselves rise in the national polls and managed the spotlight of increased media attention and expectations.

But everything is different after Miami’s game at Clemson.

The Hurricanes had a hard time answering the Tigers’ punches and now, the Hurricanes find themselves entering their first week of practice after a loss.

Just before leaving Death Valley, more than a few Miami players noted they were putting the game against the Tigers behind them and focusing on Pittsburgh, who will come to Hard Rock Stadium looking to rebound after two consecutive one-point losses.

Now, Miami has to prove one loss won’t turn into two.

Added striker Gilbert Frierson, “This is a tough loss, but I know one game [doesn’t] define us. It is still a long season. We made a lot of mistakes out there. We just have to come in tomorrow, face the film and just work a little harder, find that next step of whatever we’ve got to do.”

2. The mistakes and self-inflicted wounds proved too costly

Playing the No. 1 team in the country is challenging enough. Add in a series of mistakes – like multiple pre-snap penalties and turnovers – and things only get tougher.

Unfortunately, that’s the reality Miami faced in its loss against Clemson.

The Hurricanes, who were penalized a combined 22 times in their first three games, were penalized 15 times for 135 yards against the Tigers. Some of those penalties – including a first-quarter offsides call on Quincy Roche and a targeting call on Amari Carter – negated what could have been positive plays for Miami and extended drives for Clemson. 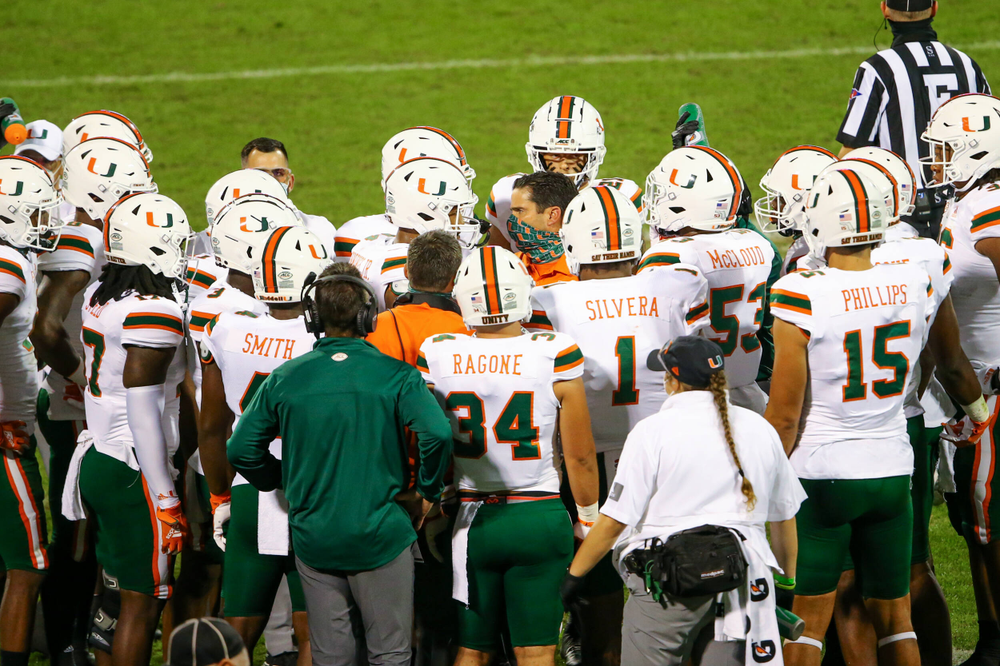 As if the penalties weren’t enough, quarterback D’Eriq King threw his first two interceptions of the season, one coming in the end zone and ending one of the more effective drives the Hurricanes were able to manage against Clemson’s defense.

All of it proved too much for Miami to overcome.

“We have to own that. We have to go back and watch the film tomorrow and see why it looked the way that it looked,” Diaz said.

3. The offensive line was tested

Clemson has long been known for its potent, powerful defensive lines. And while that group may be younger than some of the Tigers’ past more experienced units, the Hurricanes still found themselves fighting for every yard they managed.

The Hurricanes, who had been averaging 232.3 rushing yards per game, managed just 89 yards on the ground against Clemson. And after allowing just three sacks total in its first three games, Miami allowed five against the Tigers.

Big plays and first downs were hard to come by and that, like so many other things, hurt.

“They were obviously very aggressive. We know that they have an outstanding defense. We just struggled to get the first first down. We couldn’t get the first first down, we couldn’t win P and 10, the first play of the drive, to get our tempo going,” Diaz said of the offense’s early struggles. “We knew that making plays on the outside lanes of the football field was going to be a big key tonight and we didn’t make the plays on the outside part of the field, so a combination of those types of things. And then just some mistakes that we made that we just haven’t made throughout the course of the year. We have to analyze that, and certainly, give credit to Clemson, but [we have to] look to why we performed the way that we performed.”

4. Third downs were an issue on both sides of the ball

Ultimately, that combination led to Clemson dominating time of possession 38:23 to Miami’s 21:37.

That, too, took a toll as the Hurricane tried to fight back from an early deficit.

As tough as things were for his team Saturday night, Diaz made it a point – more than once – to praise his team’s effort in his post-game media session with reporters. 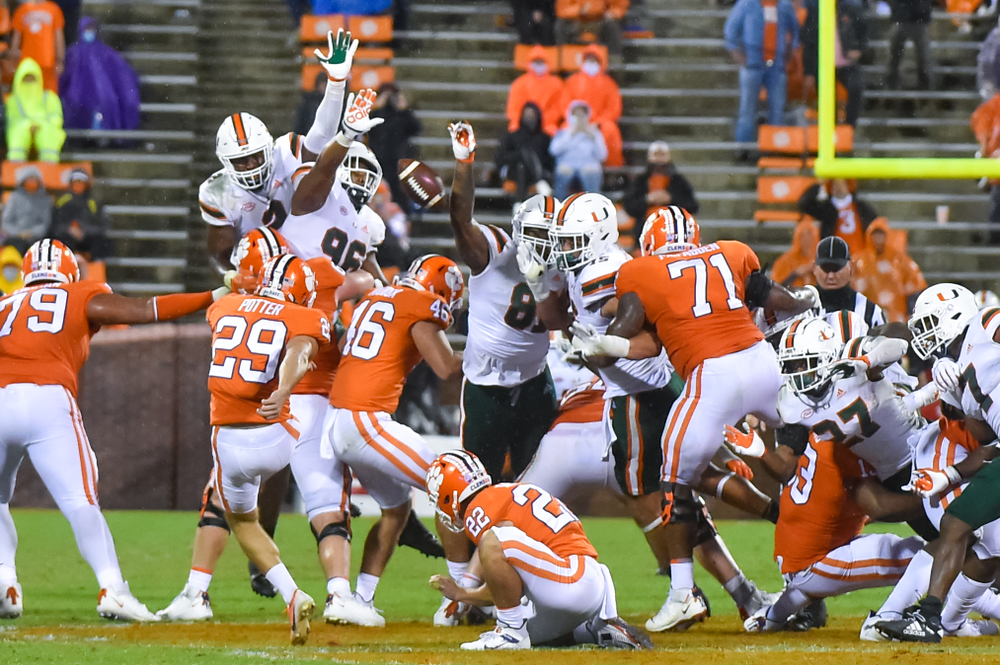 Despite falling behind quickly, Miami kept fighting, countering with a late touchdown from King, a handful of trick plays to try and get the offense moving and a blocked field goal on the final play of the first half that resulted in the Hurricanes’ first touchdown of the night.

“I do like the way that our guys stuck together. I liked the way that there was not a panic on the sideline, at halftime or anything,” Diaz said. “And we will build from this and we will put all of our focus on beating Pittsburgh next week.”

6.  There were special plays on special teams

One of the biggest plays of the night for Miami came just before halftime when the Tigers lined up for a 61-yard field goal – which was blocked by redshirt freshman defensive lineman Jared Harrison-Hunte. The loose ball was then picked up by DJ Ivey, who returned it for a 48-yard touchdown that cut Clemson’s lead to 21-10 after the extra point.

But that wasn’t the only time Miami’s special teams unit got their hands on a kick attempt.

The Hurricanes managed two other blocks Saturday, with Bolden in on both.

The three blocked field goals tied an FBS record set by South Alabama when it accomplished the same feat against FAU in 2012.

The safety, who has been a force for Miami’s defense in the early part of the season, had a game-high 10 tackles and a forced fumble to go with his blocks. Adding to his performance was the fact that, more than once, television cameras caught the safety encouraging his team on the Miami sideline – all while the Hurricanes’ medical staff worked to treat a cut across his bloodied face.

As big a game as he had personally, though, Bolden wanted more for the Hurricanes.

Miami’s big offensive showing against Florida State two weeks ago meant punter Lou Hedley had a virtual off-day, with the Australian mostly called on that night to hold for kicker Jose Borregales.

The hiatus barely seemed to faze Hedley, who on Saturday, delivered another big game for Miami. Called on to punt seven times – sometimes in a downpour – Hedley averaged 46.4 yards with a long of 51 yards.

Borregales, meanwhile, remains perfect on the season after converting on his lone field goal of the game, a 42-yarder in the second quarter that gave Miami its first score of the night.

Borregales is now 7-for-7 on field goal attempts while converting on all 17 of his point-after attempts.

In his nine months as a Hurricane, King has emerged as one of the leading voices in Miami’s locker room and Saturday against Clemson, the redshirt senior again proved how valuable his experience and guidance are.

His numbers weren’t ideal – King completed 12 of 28 passes for just 128 yards with two interception – but the quarterback, more than once, willed Miami’s offense downfield.

King’s 56-yard run in the second quarter set up the Borregales field goal and his 7-yard scramble late gave Miami’s offense its lone touchdown of the night.

At no point, even in adversity, did King look as if he’d given up on his team, something his coach noted after the game. 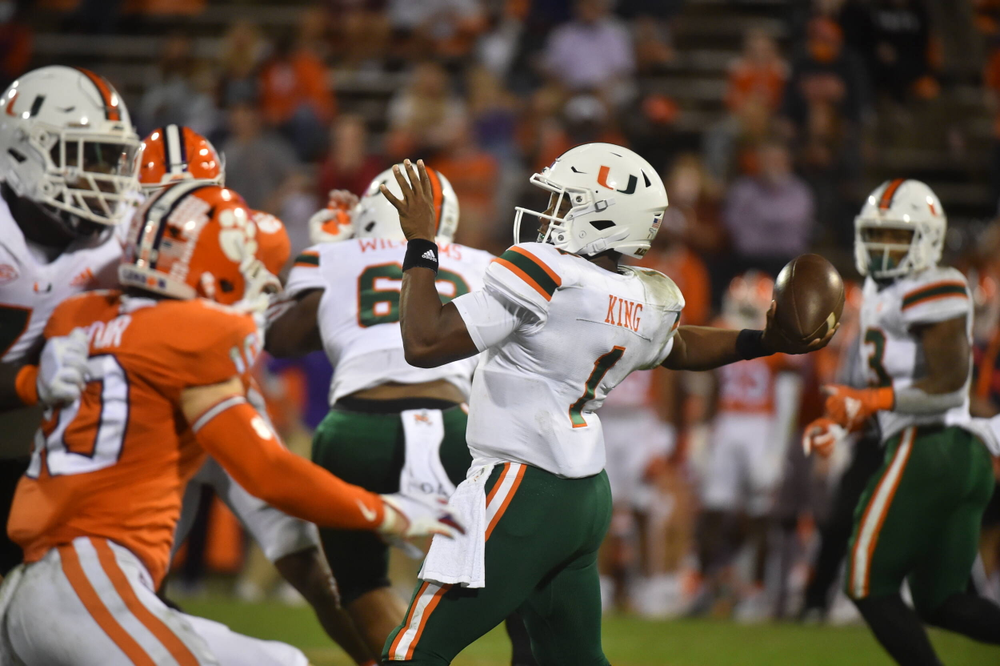 “It was a rough day for the offense, obviously, however, D’Eriq is a competitor,” Diaz said. “We talked about – when we got into the fourth quarter – let’s put a drive together we could be proud of and what he did with his feet on that drive, willing himself into the end zone right there, that’s who everybody in our locker room wants to follow.”

Said King after the game, “We just have to stay together and keep playing. I think it is easy to lead when everything is going good and you are winning. I think the real leaders come out when things are hard. So, I think we will come back in [Sunday], watch the tape, be hard on myself and just keep trying to get better [and] stay together.”

10. It’s time to focus on Pittsburgh

This week, the Hurricanes won’t be playing under the lights at Hard Rock Stadium. They’ll have to prepare for their first day game of the season and it’s unlikely a national audience will be watching.

But Diaz is confident his group can handle the task at hand and that focus will not be an issue, not on Saturday and not for the rest of the games on Miami’s schedule.

“Pitt gave us all we could handle a year ago and Virginia won our [division], despite the results today. But we play in the ACC, where we should expect to play a lot of close, competitive games,” he said. “We just have to get better, obviously, that goes without saying. We have to present a better version of ourselves than we did tonight and obviously, we have a lot of respect for who it is. They bring an extraordinary amount of fourth and fifth-year players on their football team and obviously, they will be brewing from their results as well.”