Building His Own Legacy

CORAL GABLES, Fla. — If you’ve watched the Hurricanes play in 2020, chances are, you’ve witnessed it.

No, it’s not the latest edition of the Turnover Chain or the newest Touchdown Rings (more to come on those later).

It’s the Hurricane wearing the No. 1 jersey, showcasing a level of athleticism unexpected for a player of his size and stature.

But this isn’t about D’Eriq King – this is about junior defensive tackle Nesta Jade Silvera.

The Broward County native, who has started all three games so far this fall, has posted 12 tackles, a pair of tackles for loss and one sack. And while he might not lead the ACC in any statistical categories, Silvera’s impact on the UM defense goes far beyond his personal numbers.

“Getting off to a good start is not something surprises me. Just really all the work I’ve put in and all the battles I’ve been tested with, I knew it was only a matter of time,” Silvera said. “The bubble was always going to pop.”

Just last weekend, it was ESPN analyst Kirk Herbstreit who opined for Jaelan Phillips to let Silvera wear the Turnover Chain for his contributions on a play where Phillips intercepted an errant Florida State pass, helping sway early momentum in favor of the Hurricanes.

“It’s a matter of playing every play,” Silvera said. “Playing that one play and going and enduring that one day, battling that one day. It’s all it’s about. The word I’d use is ‘enjoyable’ – just being able to go back out there and making plays. That’s really the only word for it, I guess.”

Silvera has always been a playmaker. A consensus four-star prospect and the No. 50 overall player in the Class of 2018 by ESPN, Silvera made headlines on National Signing Day when he signed with Miami. His speech on the ESPNU set became a battle cry for Miami’s coaches, as they continue to emphasize south Florida’s tri-country area in recruiting.

In fact, Silvera’s now famous, ‘Why not make the crib great?’ speech was the inspiration behind Miami’s newest touchdown rings.

Silvera elaborated on the thought this week.

“I genuinely feel like growing up, seeing dudes like…not even going that far back, but like Kendrick [Norton], RJ [McIntosh], dudes like Anthony Moten who was a superstar from Broward County, those type of guys. Chad [Thomas], listening to his music when I was coming up, guys like him, Jamal Carter, people don’t talk about Corn Elder…those defenses were really good,” he said. “Those are guys that I wanted to emulate. [Sheldrick] Redwine, Jaquan [Johnson], all those boys.”

It’s important to Silvera, however, that he not be compared to any of the other disruptive tackles who have defined the Miami Hurricanes defense for decades.

He might play with a familiar level of passion, but it’s not about being the “next” Warren Sapp, Vince Wilfork, or Gerald Willis.

It’s about being the first Nesta Jade Silvera – and it always has been.

“I’ve always felt like building my own legacy has been important to me. It’s always been that way,” Silvera said. “I’ve been around some great guys. In high school I played with [Carolina Panthers first round pick] Brian Burns, my high school had [New England Patriots running back] Sony Michel…my high school coach was Patrick Surtain.

“I’ve always been around guys who are great players. I never wanted to fall behind anybody. Even when I was coming here, with the comparisons to certain players…I don’t play like anyone. I genuinely mean that when I say it. I don’t like being in anyone’s shadow.”

I’m very excited to see what the future holds for this team, but right now, all I can really get excited for is Clemson. It sounds cliché, but it’s for real.

Silvera, who was a backup for the majority of his first two seasons and missed four games last year after undergoing foot surgery, said he always knew he had the talent to compete. It wasn’t until he was a junior in high school, he said, where he thought he would be able to do it for a career.

“It raised my drive, knowing this could be my livelihood,” he said.

When he looks back at his first two years at Miami, Silvera doesn’t shy away from the work that still needs to be done.

“I had guys in front of me that were great, phenomenal, my freshman year in Gerald Willis, an All-American,” he said. “Last season I dealt with an injury. I don’t think I had a fair shot to show what I had. I don’t think it’s a fair statement. I could have been doing this. I’ve got a lot of work to do. 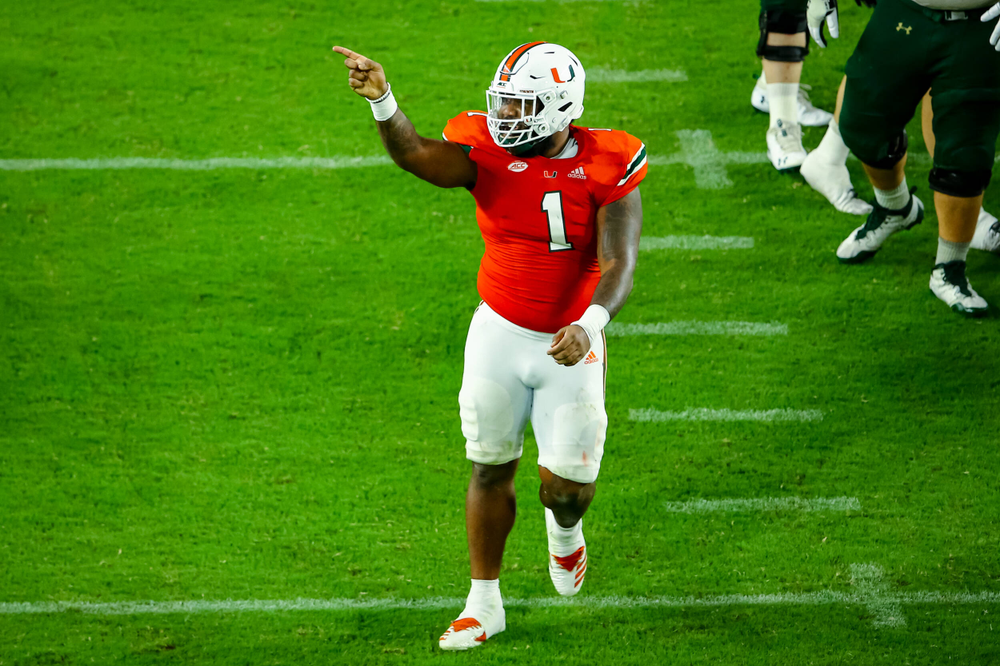 Make no mistake about it – Silvera is only focused on the present.

“I’m very excited to see what the future holds for this team, but right now, all I can really get excited for is Clemson. It sounds cliché, but it’s for real,” he said. “That’s the task at hand right now. As far as the year goes, I hope I continue to progress and doing what I need to do, and ultimately, as a team, we do what we’re supposed to do.”

But when it comes to leaving a legacy at Miami, being compared to some of the greats before him?

“It means a lot because it holds weight down here. You’re coming back to Miami, period. Winning here, being a legend here…it just means more,” Silvera said. “This is where I’m going to be.”