No. 17 Canes Ready for Primetime Matchup at No. 18 Louisville

CORAL GABLES, Fla. – Week 1 is in the history books and league play is right around the corner.

The No. 17 Miami Hurricanes will get their first test against an Atlantic Coast Conference foe this weekend, traveling to Louisville, Ky., for their ACC opener versus the No. 18 Louisville Cardinals on Saturday.

Kickoff for the top-20 matchup is set for 7:30 p.m. on ABC, but the hype surrounding the game will begin early in the morning. Louisville will be the site of ESPN’s College GameDay – the 22nd game involving the Hurricanes picked as the site of the premier college football pregame show.

“I think it’s one of the reasons you come to Miami, to play big games like this,” quarterback D’Eriq King said. “Louisville is a great team. If you watched them play last week in their first game, you can see they have a lot of great players. This is the reason I came here, to play in big games like this on Saturday night of college football.”

The Hurricanes carry a commanding 10-3-1 all-time series lead against the Cardinals, including a 4-2 edge in road games. Miami hosted the Cardinals at Hard Rock Stadium in November 2019, emerging with a 52-27 victory to snap a three-game losing streak to Louisville, but last year’s result has nothing to do with the 2020 outcome.

“They pretty much bring everybody back from last year,” head coach Manny Diaz said. “Obviously, we played them and had a great day against them a year ago, but we know that means nothing and I’m sure they’ve been reminded of that and have some revenge on their mind.”

The Canes are familiar with opening conference play on the road, as Miami will be opening ACC play away from home for the sixth time in the last seven years (2014, 2015, 2016, 2017, 2019, 2020). In addition to kicking off conference play away from Hard Rock Stadium, the Hurricanes will face one of the top teams in the ACC in its league opener.

Miami, which has dropped its last two games at Louisville, knows it will face a daunting opponent loaded with offensive firepower when the two sides meet on Saturday night.

“Going on the road to Louisville, they were predicted to be the second-best team in the Atlantic before we were lumped into one big pile,” Diaz said. “If you were playing fantasy football in the ACC, their combination of quarterback, running back and wide receiver—them, Clemson and North Carolina—I would think be in the top three in terms of skill positions and explosion on offense. They are probably the best outside zone running team in America.” 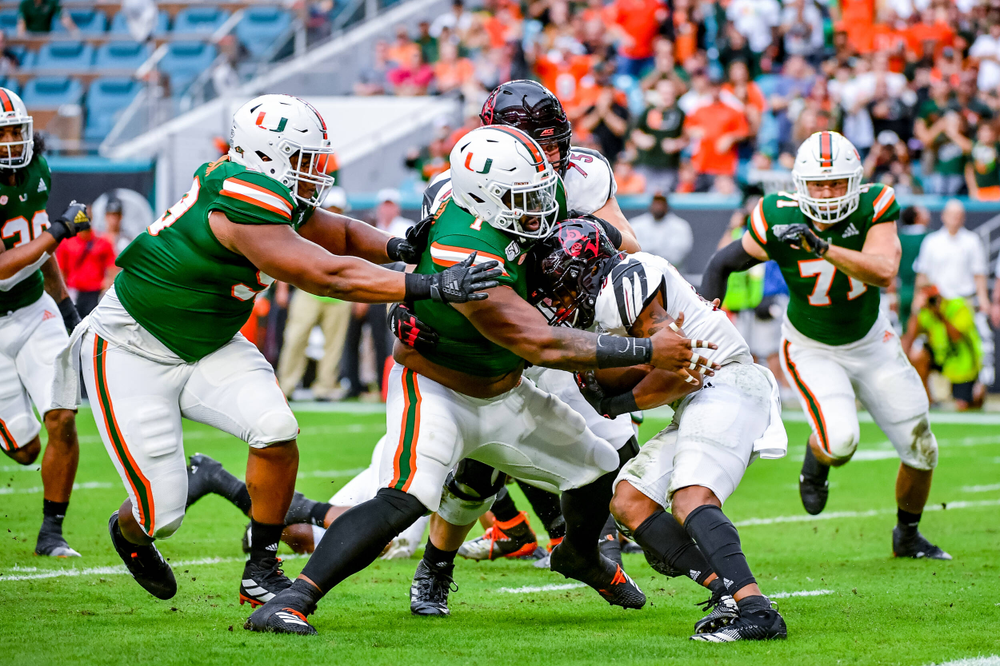 Under the direction of second-year head coach Scott Satterfield, Louisville’s offense is considered one of the best in the ACC. Wide receiver Tutu Atwell and running back Javian Hawkins were preseason all-conference selections and both players are dangerous weapons in the Cardinals’ offense.

“Tutu Atwell is as dynamic of a player as we’ll see,” Miami defensive coordinator Blake Baker said. “We got beat by him a couple times last year and we weren’t the only team. When you look at his body of work…dynamic with the ball in his hands through receptions or through the jet sweeps.”

“Javian Hawkins, he’s a very fast guy,” linebacker Bradley Jennings said. “Kind of a smaller dude, but he can hit the hole hard and he could hit it on the big stretch plays. Both of their guys can hit the hole, but we just want to come in and execute our game plan and stop the run.”

Stopping the run will be a crucial point of emphasis for a Miami defense that limited UAB to just 80 rushing yards a week ago. While the Blazers run an effective outside running scheme, Louisville takes that scheme to another level and the Canes know the will need to be sharp if they want to slow the Cardinals’ ground game.

“Last week I thought we played it really well. I think this week, it presents a different challenge,” Baker said. “With UAB, while it was new to them schematically from what they had shown the previous year, they obviously haven’t had as many at-bats as a team like Louisville, who has done this for a couple years now. We’ll have our hands full.”

Hawkins and Hassan Hall are a formidable running back tandem that posted impressive numbers a year ago. Hawkins finished his freshman season with 1,525 rushing yards and nine touchdowns on 264 carries, averaging 5.8 yards per carry, while Hall added 501 yards and five more touchdowns on 108 carries.

“Louisville, first and foremost, is a stretch team. That’s kind of their bread and butter; that’s what they like to run,” defensive end Jaelan Phillips said. “First and foremost, we’re going to have to stop that run because there is no defending the pass if they can just run the ball up our gut. So, once we stop that, they have a lot of weapons on offense … they’ve got a lot of guys that can really hurt you downfield.”

In addition to Atwell, receivers Dez Fitzpatrick (four catches, 110 yards, one touchdown vs. WKU) and Braden Smith (four catches, 110 yards vs. WKU) give quarterback Micale Cunningham a bevy of options to throw the ball to downfield. Phillips believes he and his fellow defensive linemen can help limit the U of L passing attack by swarming Cunningham before he can throw the ball.

“It poses an opportunity for us, definitely, as a D-line with me and Quincy [Roche] on the ends as opposed to last week where they kind of got the ball out quick,” Phillips said. “I think [Cunningham] likes to hold the ball a little bit more. They definitely have a lot of deep threats downfield, so it’s going to be important for us to really get to him and give him pressure in his face.”

If Miami gets caught overloading against the run, the trio of receivers will be ready to take advantage of the opportunity.

“The key isn’t really different than it is any other week,” Diaz said. “They want to run the football. They may be the best outside zone running team in the country…you have to stop the run and then limit the explosive plays. You get so tied up in the run game that they play-action pass and hit somebody in the flat or try to throw it over your head.”

Cunningham and the stable of gifted wide receivers add to the challenge of slowing down Louisville’s potent attack. A dual-threat QB who threw for 343 yards and three touchdowns in a win over Western Kentucky last week, Cunningham’s skillset will force Miami’s defensive ends to respect his arm and his legs on Saturday and that could prove difficult.

“You have to approach everybody with the same respect and you’ve got to be disciplined in your assignments,” Phillips said. “With the stretch, for example, on the backside of the stretch, [Cunningham] likes to boot a lot more often than [UAB’s Tyler Johnston] did last week. That’s something that you have to honor. Having a dynamic quarterback definitely puts you on edge and makes you respect the quarterback run a little bit more. But, at the same time, [Cunningham] is really good passing the ball, as well, and they have a lot of deep play threats. It’s going to be an active game, definitely, and we’re going to have to get after him.”

A year ago, Miami sacked Cunningham three times and forced a pair of Cardinal interceptions — including one thrown by Cunningham. While the Canes will look to ramp up the pressure on Cunningham again, they know that effectively stopping the run is the best way to defend Louisville’s passing attack.

“We got after that guy a little bit last year and, again now, it’s not about sacking the quarterback, it’s about pressuring the quarterback,” Diaz said. “It was it’s a big part of the game a year ago because they do take some shots down the field. They’ve got a couple different protections and a couple different ways that they can try to handle our defensive ends. But it’s not going to matter because we can’t stop the run, then they can throw the ball when they want to.”

While the Hurricanes won last year’s game against Louisville by 25 points, 52-27, the Cardinals posted 496 yards of offense in the contest and bring back 10 starters from last year’s offense, which finished top-30 nationally in rushing, scoring and total offense.

“Credit to them for being able to be so skilled at the things that they do. Everything that they do, they do well,” linebacker Zach McCloud said. “As a defense, you’ve got to pride yourself on being able to stop the run first. If we don’t stop the run, they won’t have to do anything else – I’m sure they will, but they won’t have to do anything else – so, you stop the run first and then you get rid of the passing game. At least in my mind, that’s what the order should be.”

“First and foremost, we're going to have to stop that run because there is no defending the pass if they can just run the ball up our gut."

While Louisville’s offense gets a lot of attention for its playmaking ability, Miami’s attack had an impressive debut last week against UAB. The Canes scored 31 points and posted nearly 500 yards of total offense, including 337 on the ground. It marked the program’s second-best rushing total since joining the ACC in 2004 and most since recording 364 at Virginia Tech on 10/23/2014.

Junior running back Cam’Ron Harris, who finished with 134 rushing yards on 17 carries and a pair of touchdowns in the win over UAB, knows Louisville has plenty of speed and talent on defense, but that will not change Miami’s approach on Saturday.

“Just watching the film on the Louisville defense, those guys are athletic and all around the ball.,” Harris said. “They’re a fast defense. They are a more downhill team with fast DBs and fast linebackers. We’re not going to switch our game plan, but we’re going to be more balanced and we’re going to run the ball downhill.”

King, who extended his own FBS record to 16 straight games with at least one rushing touchdown and one passing touchdown as part of an excellent debut as a Hurricane last week, expects Louisville’s defense to be hyped when they face off against Miami’s high-octane offense.

“I think they play with a lot of energy. You see on tape those guys are flying around, making plays,” King said. “Both linebackers are really good. They’re super, super, super talented, super fast. They like to make a lot of plays downhill. Just watching them on tape, the thing that pops out to me is just the energy they play with and how excited they are to play.”

Louisville’s defense held Western Kentucky under 250 yards of offense, limiting the Hilltoppers to just 4.3 yards per play. Diaz and the Canes know the Cardinals’ defense to be eager to avenge last year’s game after allowing 52 points in a loss at Hard Rock Stadium.

“The biggest difference from watching them play on Saturday night is that their defense made a great transformation,” Diaz said. “I think this is the first time in five years that Louisville has had a defensive coordinator in back-to-back years. Their kids are a lot more confident and playing aggressively. They are much more multiple than they were a year ago. They tackled outstanding for an opener. The score was a little bit misleading because Western Kentucky benefited from beneficial field position. Our guys will be very excited to play Louisville on a Saturday night week one in the conference.”