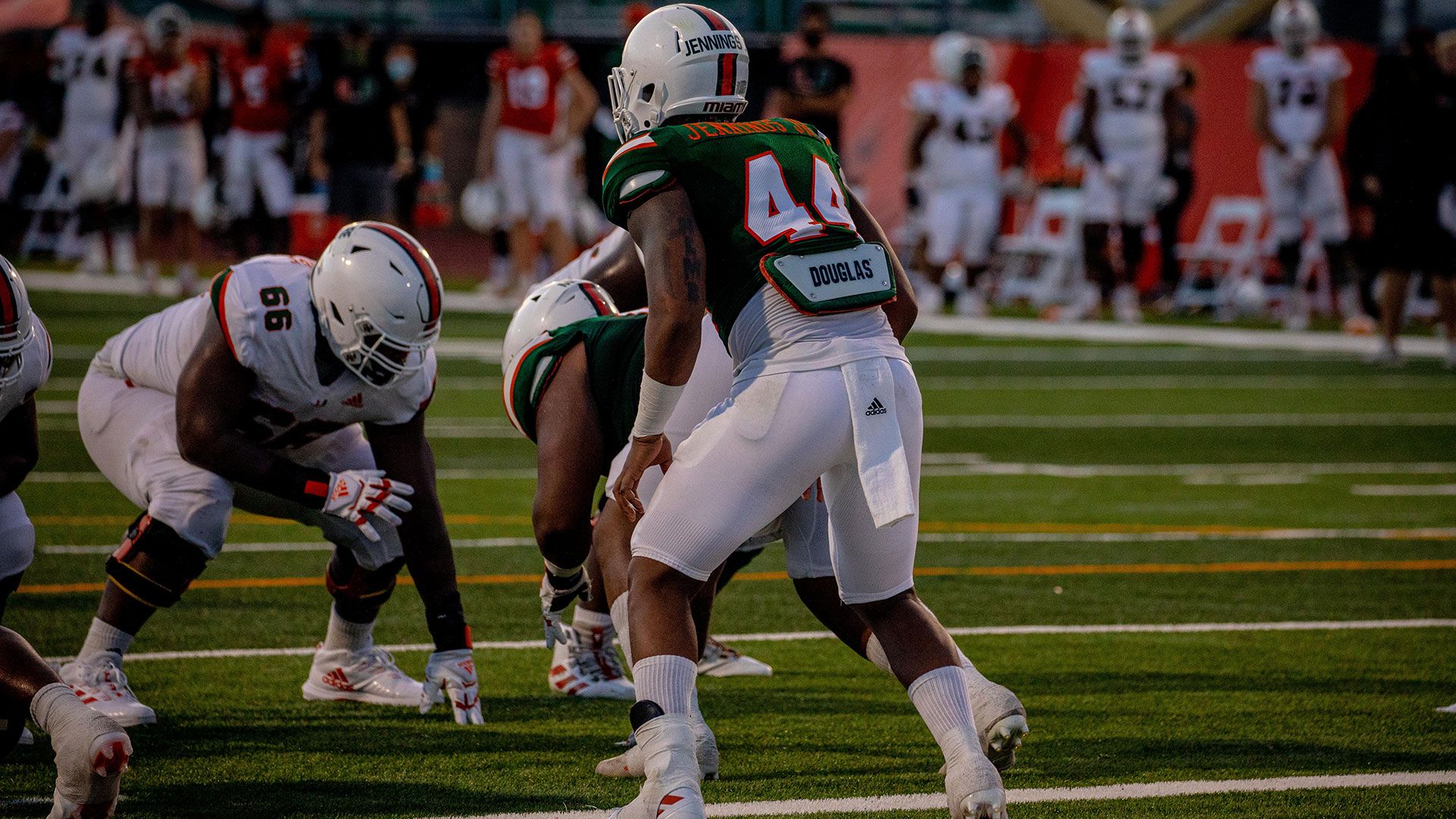 CORAL GABLES, Fla. – Each of them, in their own ways, will likely feel a mix of emotion.

When the Miami Hurricanes take the field at Hard Rock Stadium next week for their season opener against UAB, players and coaches alike expect there will be an overwhelming sense of gratitude, mixed with the typical first-game nerves.

This opener – the one that comes amidst a global pandemic – was never a given during an offseason of uncertainty. And so, none of the Hurricanes are taking it for granted.

But for two of them in particular – linebackers Bradley Jennings Jr. and Waynmon Steed – the journey to this moment was even more fraught, more tenuous and far more harrowing.

More than a year ago, just days apart, Jennings and Steed suffered devastating injuries that could have kept them from ever playing the game again.

That, they say, is part of the reason their careers aren’t over.

“We were roommates and we talked about it every day. The first day, when both of us were back in the house, we were like, ‘Man, it’s crazy. You get hurt, then I get hurt and then look at us now,’” Steed said. “We just went from there. We went back to work, every day we worked.”

Added Jennings, “Everything I did, he did. We had the same schedule, the same rehab time. We were always together. It was a long journey, but we kept each other’s heads up. When one of us was feeling down, we’d come in each other’s rooms and talk to each other. It helped.” 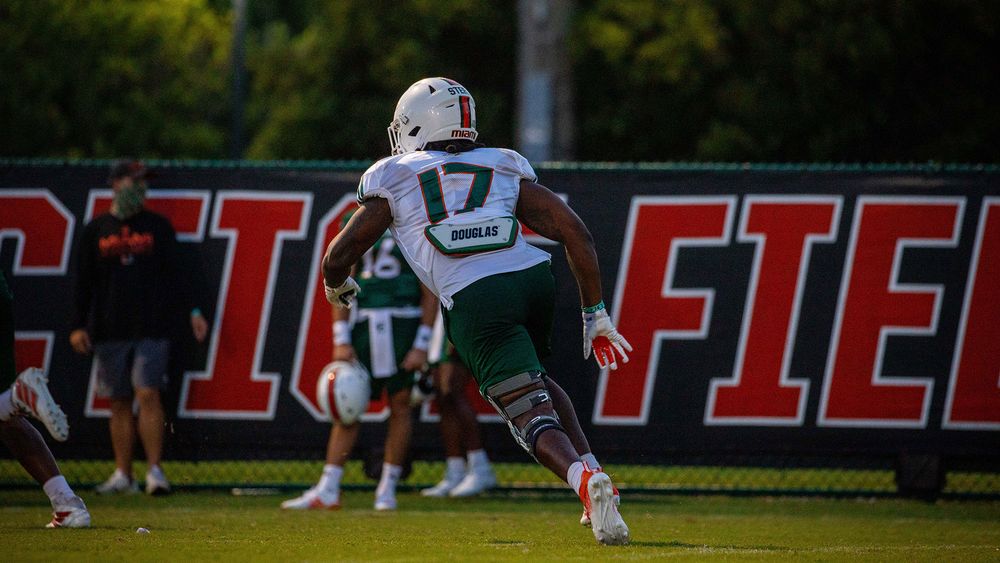 Over the course of the last 18 months, the pair have had plenty to discuss.

There was, of course, the initial shock and disappointment at getting hurt. Then came their respective recoveries from the painful, hours-long surgeries that forced both to have to relearn how to walk. For Jennings, there was even a month-long stretch when doctors urged as much bedrest as possible in an effort to try and ease the pain that radiated throughout his lower body.

Once the initial recovery from surgery was behind them, the two progressed to their next challenge: hundreds upon hundreds of physically, mentally and emotionally draining rehab sessions with Jeff Ruiz, the athletic department’s director of rehabilitation.

With his years of experience, Ruiz understood how daunting a challenge each linebacker faced to get back on the field. He didn’t mince words when describing what each endured.

“To be very honest, how do you think getting hit by a car or a blunt object would feel? They were trying to come back from that,” Ruiz said. “Both of those guys had very traumatic injuries. Most people would probably find an excuse not to come back and use it as a crutch for the rest of their lives. And the pain? We’re talking about excruciating pain. It’s exhausting, too. That’s part of it. Going through that kind of pain, for that long, can take a toll on somebody’s overall well-being. Everybody responds differently, but the way they reframed the whole situation was that they got hungry and they didn’t let this bring them down all the time.”

As hard as they worked, and as badly as they wanted to get back on the field, though, Jennings and Steed faced more tests than they could have imagined throughout the process.

Sometimes, their bodies simply couldn’t hit the benchmarks doctors set for them to progress to the next level in their rehab work. Sometimes, Ruiz wouldn’t allow them to do workouts they insisted they could. There were days frustration seeped through and doubt creeped in.

But every time they faced questions, Steed and Jennings found ways to answer.

They turned to their parents and their faith for support. They relied on Ruiz and assistant strength and conditioning coach Jordan Barber. Teammates provided encouragement and coaches tried to find the necessary balance between letting them hang their heads for a moment and providing the occasional doses of tough love.

“It was a tough as a coach because you understand how much work they put in until that time they got hurt. Both of them were looking at strong roles on the team. Obviously, [last season] we had [Michael] Pinckney and Shaq [Quarterman], but [Steed and Jennings] were really in line for significant playing time and then they had it taken away from them,” said Hurricanes defensive coordinator and linebackers coach Blake Baker. “It’s tough from that standpoint. It’s tough when you see them down and frustrated.

“It was really like being a parent. You have so much empathy for what they’re going through, but there’s also a time when you have to help them snap out of the funk they’re in and not think they’re a victim. … It was really tough at times.” 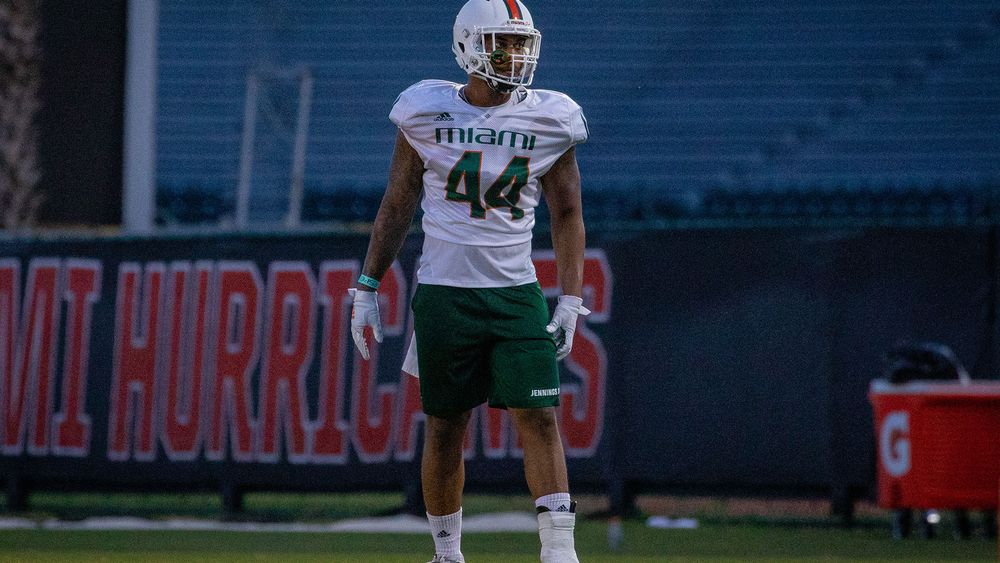 Things only got tougher in March when, roughly a year after Steed and Jennings were hurt, their rehab processes were thrown into chaos by the coronavirus pandemic.

With Miami’s campus closed to mitigate the virus’ spread and spring practices canceled, no longer could Steed and Jennings come into the training facility to continue their daily work with Ruiz, Barber and the rest of the Hurricanes’ strength and conditioning staff.

Suddenly, the group had to get creative. For Ruiz, Steed and Jennings, that meant virtual training session via Zoom and finding whatever resources they had in their respective homes to try and replicate the weight loads Ruiz needed the linebackers to handle in their workouts.

“It was legitimately, at least 3-4 times a week and sometimes 5-6 times a week,” Ruiz said of the group’s pandemic workout sessions. “It depended on the week and what they were doing and what they were building up to. But we were always working through Zoom, checking in. Neither of them had an adequate weight setup until a little bit later.”

Given the severity of their injuries and the extent of their rehabilitative work, Jennings and Steed were among the first two Miami student-athletes to receive clearance to return to the Hurricanes’ training facility once shelter-in-place restrictions started to ease.

They then navigated through socially-distanced sessions and followed all the necessary safety precautions. Throughout the summer, each continued working on rebuilding their strength for the start of preseason camp.

“When I came in for summer workouts, I was pushing it, going hard, going on the track, doing my rehab work, the weight room, just going out there every single day was big,” Steed said. “My teammates had my back through it all. The strength coaches were awesome. [David] Feeley was awesome. Jordan Barber was awesome. Jeffrey Ruiz and the training staff, all those guys did a great job as my process went on.”

Once preseason camp began, though, another test loomed.

Could the two linebackers trust that after more than a year of rehab work their bodies could handle the physical challenge of playing high-level college football again?

It didn’t take long to find out they could.

“My first practice, I was very excited. I came with a lot of energy. It was just great being back out there with my teammates…I hadn’t played football in like 18 months or something,” Jennings said. “I hit [running back Cam’Ron Harris] on an inside run and that’s when I knew I was good. Once I hit him, all the thought about my injury went out the window. I was like, ‘I’m back.’ After that first practice, I haven’t even thought about my injury or anything.”

Said Steed, “When I made my first tackle at practice, that’s when I realized, ‘Oh yeah, it’s just another day of football.’ I think I tackled either [Donald Chaney Jr. or Jaylan Knighton.] It was one of the freshmen and speaking of the freshmen, they’re rolling. So, to tackle guys like that, that’s when you know you’re back.”

“When I made my first tackle at practice, that’s when I realized, ‘Oh yeah, it’s just another day of football.’"

Still, as much as they’ve reveled in being on the field during camp, both Jennings and Steed expect they will feel even more joy when they put on their uniforms next week.

For the first time in more than a year, they’ll have the opportunity to run through Miami’s famed smoke as they take the field against the Blazers.

Next Thursday, comes another step in their journeys. And neither will take it for granted.

Added Steed, “It’s going to feel amazing. I might cry tears of joy. After a long recovery, a long road, just to be back on the field with my brothers, with The U on my back, it’s going to feel awesome. I’m going to go out there and play lights out. That’s all I can do for my team.”