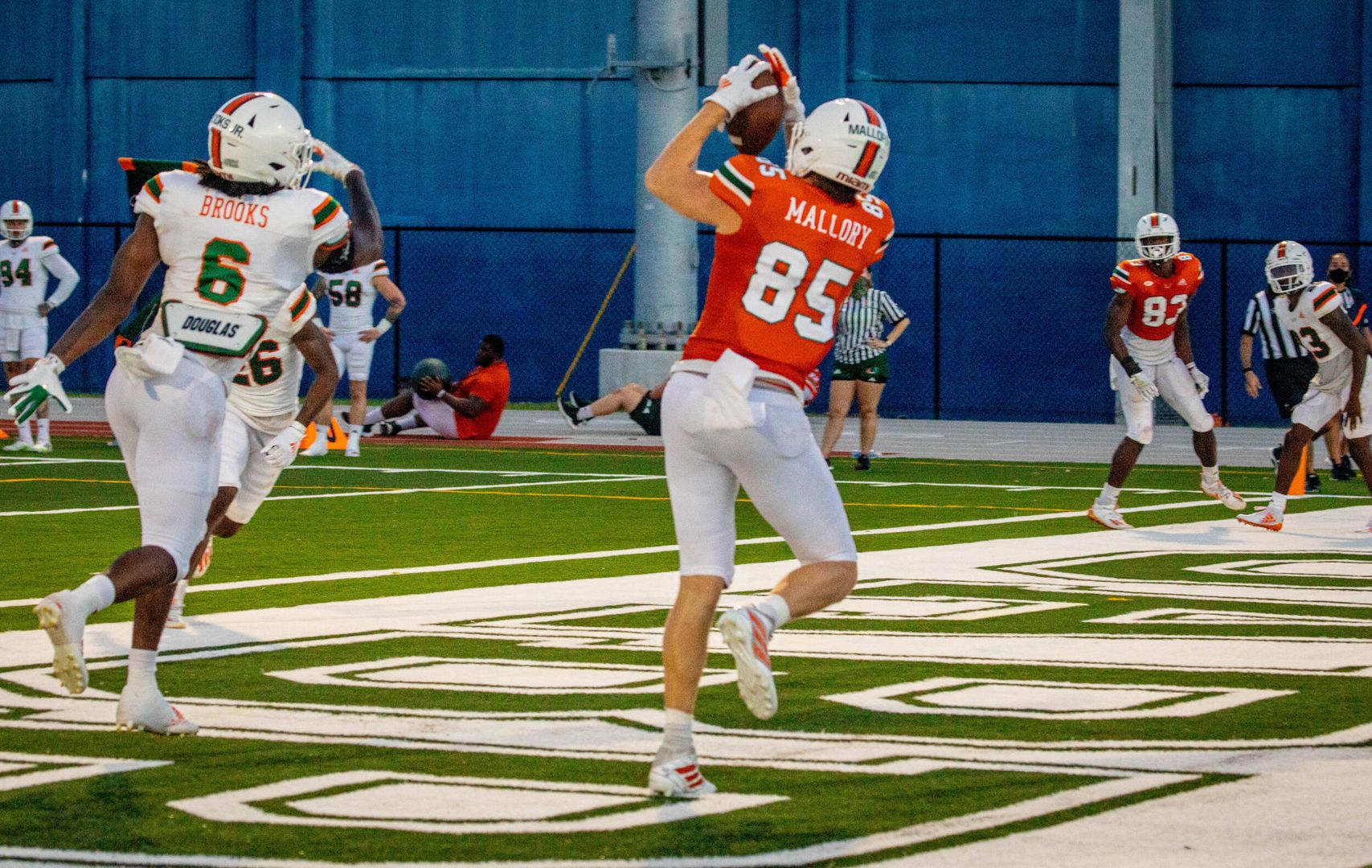 But most importantly on this warm August night in South Florida, there was football.

For the first time since the 2019 season ended in December, the Hurricanes – who had their spring workouts cut short in March because of the COVID-19 pandemic – got their first taste of game-like action when Miami hosted its first scrimmage of training camp on Sunday.

King, who transferred to Miami in January and was named the Hurricanes starter just before camp began, was 15-of-26 for 178 yards with four touchdowns. He also had five carries for 25 yards in a performance that left Hurricanes coach Manny Diaz pleased.

“I was very pleased with the way that our guys got after it,” Diaz said. “The tempo of the offense was telling. We were able to run a lot of plays, got a lot of action and I thought it was highly competitive. I thought both sides made a lot of things happen. But, again, I thought D’Eriq King, his ability to make plays – four touchdown passes, plays with his feet – really, really ignited our offense and got them going.”

1 – Miami’s playmakers are transitioning well to their new offense

While at SMU last season, Hurricanes offensive coordinator Rhett Lashlee presided over one of the nation’s most productive – and exciting – offenses.

The Mustangs averaged 489.9 yards per game, which ranked ninth among all FBS programs and understandably, his decision to join Miami’s staff earlier this year has generated plenty of excitement. 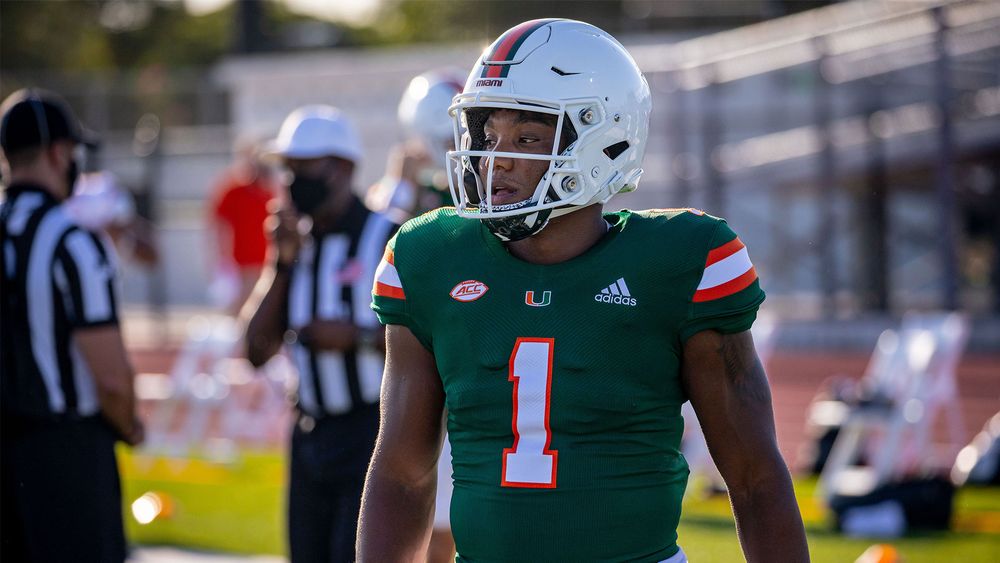 On Sunday, the Hurricanes got a chance to see just how much of Lashlee’s offense they’ve learned and how productive they can be against their ACC rivals this fall.

But more than the yardage or how much progress the offense has made in learning Lashlee’s system in a short time, Diaz noted post-scrimmage how pleased he was with the discipline the unit showed in its first test of camp.

“What I was pleased with was the operation for a first time out as a scrimmage. Your pre-snap penalties, guys lining up the wrong way, just not knowing what to do – I thought we were outstanding in that,” Diaz said. “I thought coach Lashlee and the staff did a great job in getting his guys prepared. I’m sure they’ll watch the film and realize they can be so much better, but again, just in terms of functioning in a scrimmage setting for the first time out and not having a spring. I was very impressed.”

2 – Newcomers are getting opportunities to shine – and capitalizing

Several of Miami’s top freshmen had extensive opportunities to play Sunday night and they took advantage of those chances, showing teammates and coaches their potential.

Given the way some of those players have performed in camp leading up to Sunday’s scrimmage, Diaz said he wasn’t surprised to see them do well.

Still, that’s not anything to take for granted.

“Both guys had explosive runs,” Diaz said of Chaney and Knighton specifically. “Chaney had some good, hard runs, some short yardage stuff and both of them had the ability, when they got into the open field, to make things happen. … They’ve both had a great camp. It was great to see them get out here. Their first couple carries, a little bit of … ‘Ok,’ but once they got comfortable, you could really see their explosion.”

And while transfer Jaelan Phillips isn’t a freshman, Sunday’s scrimmage marked his first real action in a Hurricanes uniform and the defensive end – who has been earning praise from coaches throughout camp – delivered, pressuring Miami’s quarterbacks consistently and notching a pair of tackles and a sack.

“Jaelan Phillips, we probably played him for maybe a little bit more than a quarter, he’s relentless off the edge,” Diaz said. “Just, for me, standing behind the offense and just watching him and how quick he can move … you like to see guys who’ve had a great week of practice come out on scrimmage day and put it together and Jaelan did.”

3 – Jose Borregales a boost for the kicking game

There’s no doubt Miami’s kicking game endured its share of struggles last season. But the arrival of graduate transfer Jose Borregales should help turn things around on that front. 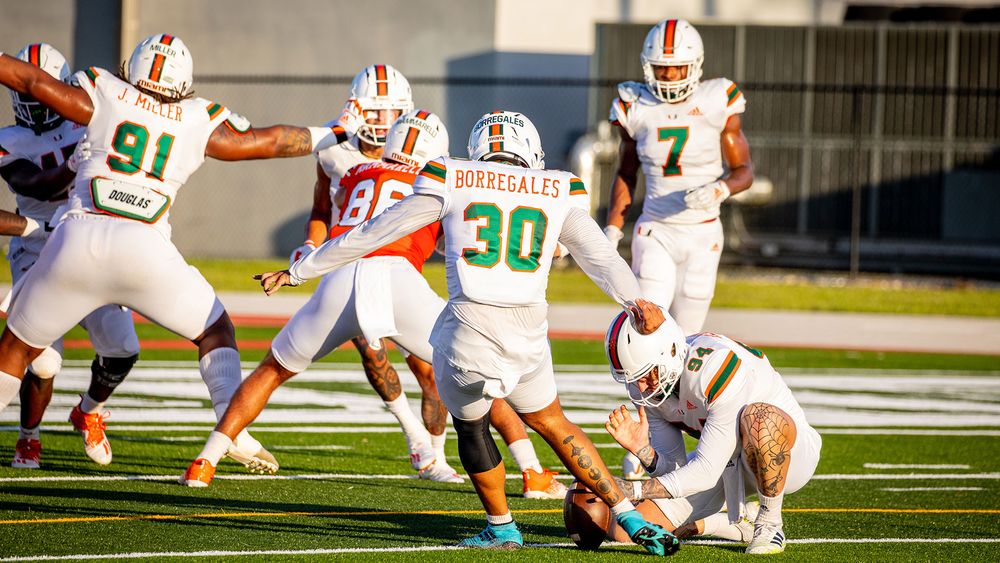 The kicker, who was 21 of 29 on field goal attempts last season while playing at FIU, connected on all six of his extra-point attempts Sunday and hit a 49-yard field goal on one scoring drive.

That’s encouraging for a program who, last season, had its three kickers combine to go 12-of-20 with a season-long of 50 yards.

4 – Will Mallory once again showed off his athleticism

When his fellow tight end and good friend Brevin Jordan got hurt last season, Will Mallory stepped up to give the Hurricanes a boost late in the year.

Mallory had a career performance against FIU on Nov. 23, catching four passes for 71 yards. A week later at Duke, he bested those numbers with four catches for a new career-high 93 yards.

The junior picked up where he left off Sunday, showing off his athleticism with a scrimmage-high four catches for 71 yards and a 5-yard touchdown pass that elicited some excited fist pumps from quarterback D’Eriq King, who threw the pass.

“Will has really, really improved being physical in that C and D gap. Obviously, his catch radius is really, really good,” tight ends coach Stephen Field said of Mallory heading into Sunday’s scrimmage. “He’s tall, he’s strong, he’s fast, he can run and the fact that now he’s getting really, really good in blocking and his technique is getting good. That’s something that’s going to be really good for him and something he’s worked on with his physicalness and his strengths.” 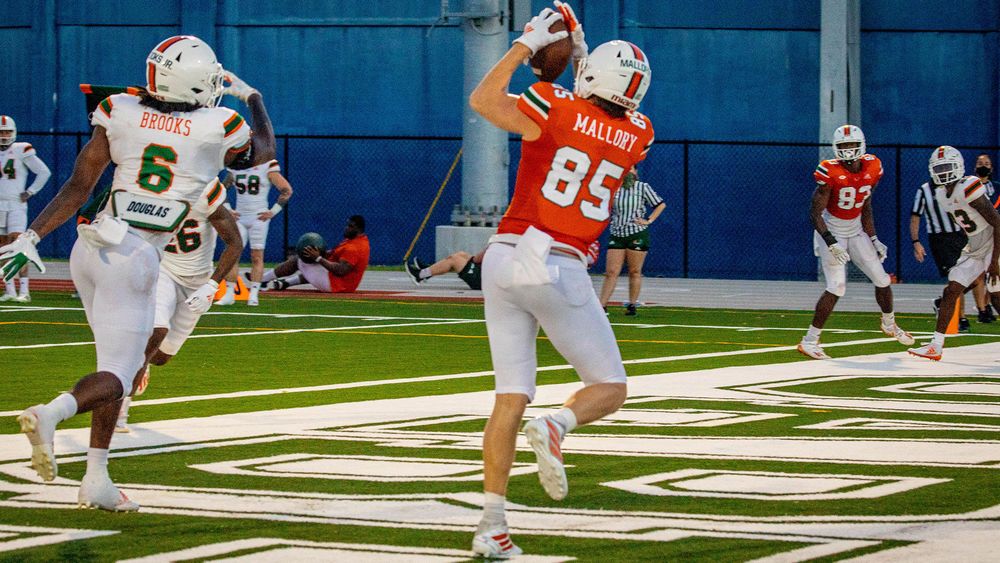 One of the biggest questions Miami faces heading into this season comes at a spot that has been beyond reliable for the Hurricanes over the course of the last four years – linebacker.

But now that stalwart four-year starters Shaq Quarterman and Mike Pinckney have moved on to their professional careers, the Hurricanes will need to find playmakers to fill the void.

Redshirt senior Zach McCloud is expected to lead the group, but others – including redshirt juniors Waynmon Steed and Bradley Jennings, Jr. both of whom are coming off injuries – will need to contribute.

None of that is a bad starting point, Diaz noted.

“I first have to point out Bradley Jennings and Waynmon Steed, both coming off injuries, both made a lot of good things happen,” Diaz said. “But then you mention [Sam] Brooks, [Avery] Huff, and Corey Flagg and Tirek Austin-Cave, Flagg and Cave, they left their mark a few times on some big hits. It’s fun. We’ve got a great competition at linebacker, and not even to mention Zach McCloud, we’ve got a lot of guys that have been getting in play and that competition is far from over.”