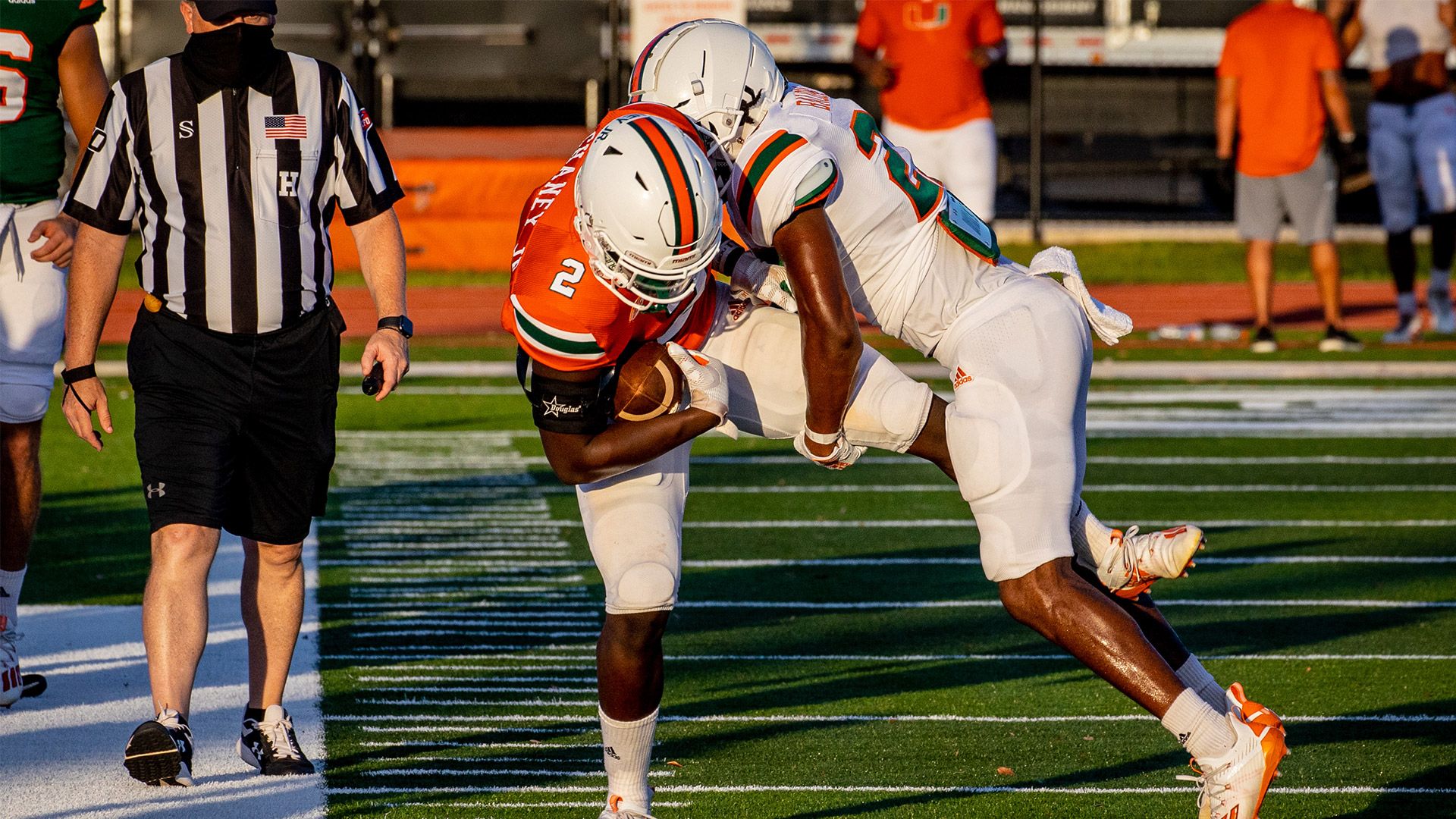 MIAMI, Fla. – The Miami Hurricanes have always been known for their speed and lots of it was on display on Sunday night, as the Canes held their first scrimmage of fall camp.

New offensive coordinator Rhett Lashlee’s offense was pushing the tempo all night, while the Canes flashed a lot of speed and athleticism on defense in their first opportunity to face off against each other.

“I was very pleased with the way that our guys got after it,” head coach Manny Diaz said. “The tempo of the offense was telling. We were able to run a lot of plays, got a lot of action and I thought was highly competitive. I thought both sides, made a lot of things happen.”

New starting quarterback D’Eriq King was electric leading the offense, as King completed 15 of 26 pass attempts for 178 yards and four touchdowns in his debut scrimmage as a Cane.

“D’Eriq King, his ability to make plays — four touchdown passes, plays with his feet — really, really ignited our offense and really got them going,” Diaz said.

Several weapons stood out in the passing game. Junior tight end Will Mallory led the way with four catches for 71 yards and a touchdown and senior receiver Mike Harley hauled in a pair of touchdowns, while freshmen Michael Redding III (3 catches, 41 yards) and Xavier Restrepo (2 catches, 54 yards) flashed a lot of potential when the ball was thrown their way.

The freshmen receivers looked good, but a pair of freshmen running backs showed they’re ready to make a big difference for the Canes’ ground attack. Don Chaney and Jaylan Knighton both rushed for a touchdown, while Restrepo added a 70-yard rushing touchdown, showing Miami’s offense could do damage through the air and on the ground.

“They both have had a great camp, so it just made sense and they’d have a great night tonight. Chaney went 11 for 57 and a touchdown and Knighton had 10 for 126 and a touchdown,” Diaz said. “Both guys had explosive runs, Chaney had some good, hard runs on some short-yardage stuff and both of them had the ability when they got out in the open field to make things happen.”

The offense showed it can be explosive, but Diaz was most impressed by how clean the Canes run the new system despite not having a spring to get used to it.

“What I was pleased with was the operation for a first time out as a scrimmage. Your pre-snap penalties, guys lining up the wrong way, just not knowing what to do, I thought we were outstanding in that,” Diaz said. “I thought coach Lashlee and the staff did a great job and getting his guys prepared. I’m sure they’ll watch the film and realize they can be so much better, but again, just in terms of functioning in a scrimmage setting for the first time out and not having a spring, I was very impressed.”

While the new offense provided a lot of excitement and highlights, Miami’s defense also had plenty of spectacular moments.

The Hurricanes, who have wreaked havoc in the backfield for the four seasons since Diaz first arrived on campus as defensive coordinator in 2016, have another deep stable of rushers that consistently were disruptive in the backfield.

“Jaelan Phillips, we probably played him for maybe a little bit over a quarter, he’s relentless off the edge,” Diaz said. “You like to see guys who’ve had a great week of practice come out on scrimmage day and put it together and Jaelan did. Then you mention Cam Williams, he really took advantage of his time tonight and I thought was very impressive. Chantz Williams did some good things on defense. He had five tackles and two sacks in his first-ever college scrimmage. That idea of getting guys off the edge creating havoc is a big part of our defense and they really did step up and played their part.”

Diaz also was very impressed with how the young linebackers performed on Sunday night. Competition is fierce at linebacker, with the Canes looking to replace four-year starters Shaq Quarterman and Michael Pinckney, and there are several players that stood out in the first scrimmage.

“I first have to point out Bradley Jennings and Waynmon Steed, both coming off injuries, I thought both made a lot of good things happen,” Diaz said. “But then when you mention [Sam] Brooks, [Avery] Huff and Corey Flagg and Tirek Austin-Cave, Flagg and Cave, they left their mark a few times on some big hits. It’s fun and we’ve got a great competition at linebacker, and not even to mention Zach McCloud, we’ve got a lot of guys have been getting in play and in that competition is far from over.”

Safety Gurvan Hall led all defenders with seven tackles, while Brooks, Steed and Chantz Williams each added five tackles. Chantz Williams added a pair of sacks, while Flagg had a sack and fellow freshman Marcus Clarke recorded an interception.