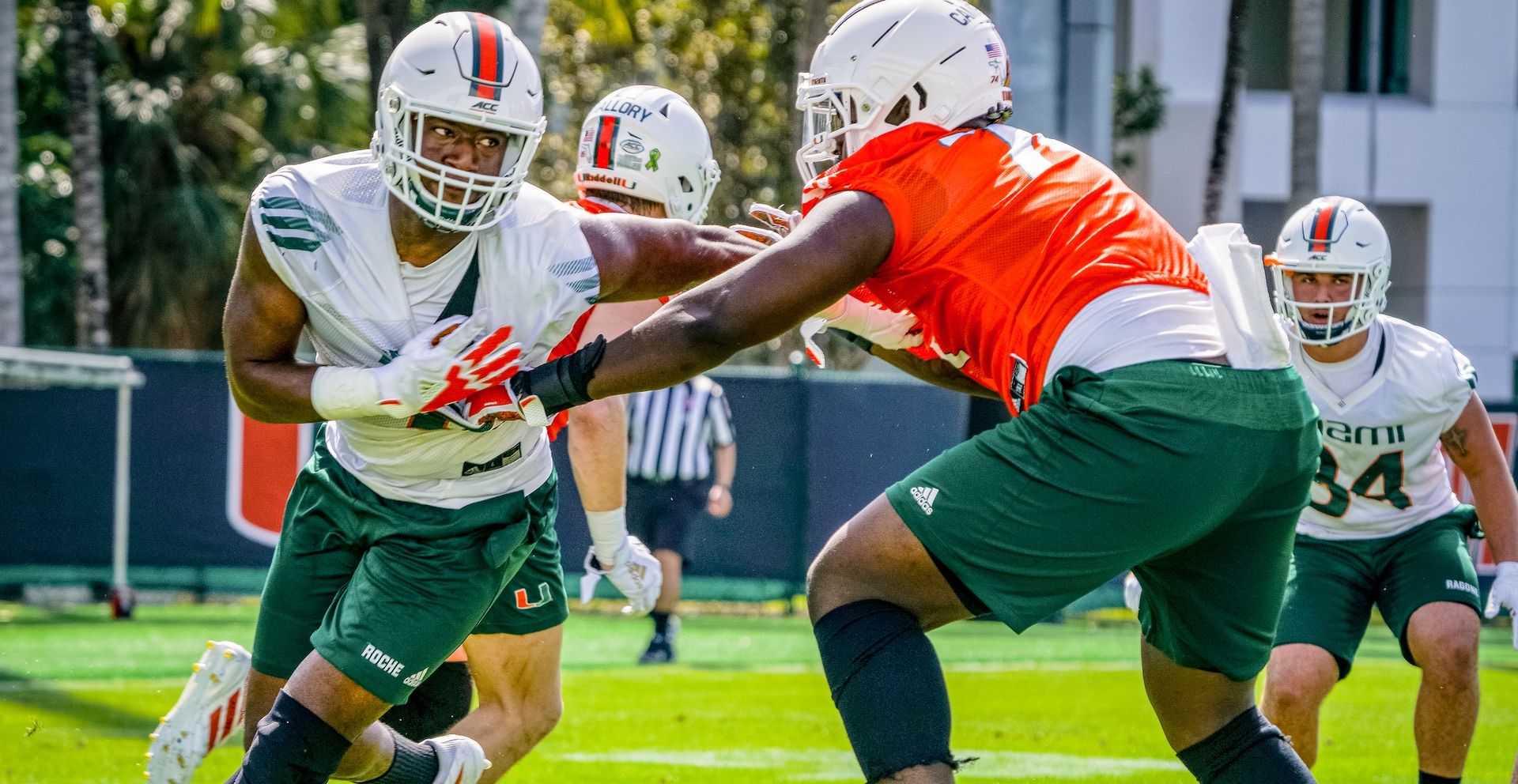 Another One: Pair of Canes on Nagurski Watch List

CORAL GABLES, Fla. — Two Miami Hurricanes added to their preseason accolades Tuesday when they were selected to the watch list for the 2020 Bronko Nagurski Trophy, honoring the national defensive player of the year.

Redshirt sophomore Greg Rousseau and redshirt senior Quincy Roche, who were both picked as players to watch for the Chuck Bednarik Award earlier in July, were both recognized by the Football Writers Association of America (FWAA) as candidates for the Nagurski Trophy. Miami was one of just 18 schools with multiple players selected.

In a breakout redshirt freshman season, Rousseau was named 2019 ACC Defensive Rookie of the Year and to the 2019 All-ACC First Team. Rousseau led the ACC in sacks (15.5) and tackles for loss (19.5), ranking No. 2 nationally in sacks and tied for No. 9 in TFLs. Rousseau’s sack total tied the second-best mark in a single season in Miami history, and he became only the second Hurricane ever to win ACC Defensive Rookie of the Year.

After a dominant career with the Temple Owls, Roche transferred to Miami for his final season of eligibility. Roche racked up 137 total tackles, 39.5 tackles for loss and 26 sacks in his career, and ranked No. 5 in sacks (13.0) and No. 11 in TFLs (19.0) a year ago. Roche was selected as American Athletic Conference Defensive Player of the Year in his final season with the Owls, and he finished his career with seven PBUs, six forced fumbles and three blocked kicks.

The winner of the 2020 Bronko Nagurski Trophy presented by LendingTree as the National Defensive Player of the Year will be chosen from five finalists selected by the FWAA and the Charlotte Touchdown Club. The FWAA All-America Committee, after voting input from the association’s full membership, selects a 26-man All-America Team and eventually the Nagurski Trophy finalists. Committee members, by individual ballot, select the winner they regard as the best defensive player in college football.

The FWAA has chosen a National Defensive Player of the Year since 1993. In 1995, the FWAA named the award in honor of the legendary two-way player from the University of Minnesota. Nagurski dominated college football, then became a star for professional football’s Chicago Bears in the 1930s. Bronislaw “Bronko” Nagurski is a charter member of both the College Football and Pro Football Halls of Fame.

The Bronko Nagurski Trophy is a member of the National College Football Awards Association (NCFAA), which encompasses the most prestigious awards in college football. Founded in 1997, the NCFAA and its 25 awards now boast over 800 recipients, dating to 1935. Visit ncfaa.org and @NCFAA on Twitter to learn more about the association.